Something smells a bit fishy……

We started our day getting to know the Metro system with our lovely guide, Yoko – Our destination the Tsukiji Fish Market.

It is said, according to the Tsukiji Fish Market website, that the fish market dates back to the 16th century, the beginning of the Edo period. Tokugawa Ieyasu, the first Tokugawa shogun and builder of Edo as is now Tokyo, invited fishermen from Tsukudajima, Osaka and gave them a privilege for fishing in order to let them supply seafood to Edo Castle. The fishermen purveyed fish to the Castle and sold the remains near the Nihonbashi bridge. It was the origin of Uogashi. Then, to meet the growing demand for fish with the increase in population, Nihonbashi Uogashi was reformed and developed into a market. The market was lead by wholesale merchants licensed by the Shogunate who bought fish from local ports, sold them to jobbers in the market and thus built up a large fortune, forming their own distributing network. Vegetables markets handling vegetables gathered in the suburbs of Edo were established in Kanda, Senju and Komagome: the Edo’s three big vegetable markets. The markets attained prosperity led by wholesalers and jobbers like fish markets. During the Edo period the market price was determined chiefly by negotiated transactions between sellers and buyers. Public auction was hardly taken place except in vegetable markets. In the Meiji and Taisho eras, the privilege of wholesale merchants were abolished. In 1923 some 20 private markets in Tokyo were destroyed almost completely by the Great Kanto Earthquake. After the earthquake, Tokyo City as it then was undertook to construct a central wholesale market on the bases of the Central Wholesale Market Law which had been promulgated in the same year. As a result, the three markets of Tsukiji, Kanda and Koto were founded and the growing population then led to a succession of new markets.

There is a tuna auction here every day, but as we were not here to buy tuna and it’s held at 4am, that was just never going to happen.

One thing to know about the markets is that the sellers aren’t one bit interested in tourists being there which is fair enough really because we weren’t going to buy anything, we’re there just to gawk and get in the way. In fact, Our guide, Yoko said that Japanese people can’t understand why tourists would want to go there – it’s freezing cold, it smells, it’s dirty and it’s full of fish! 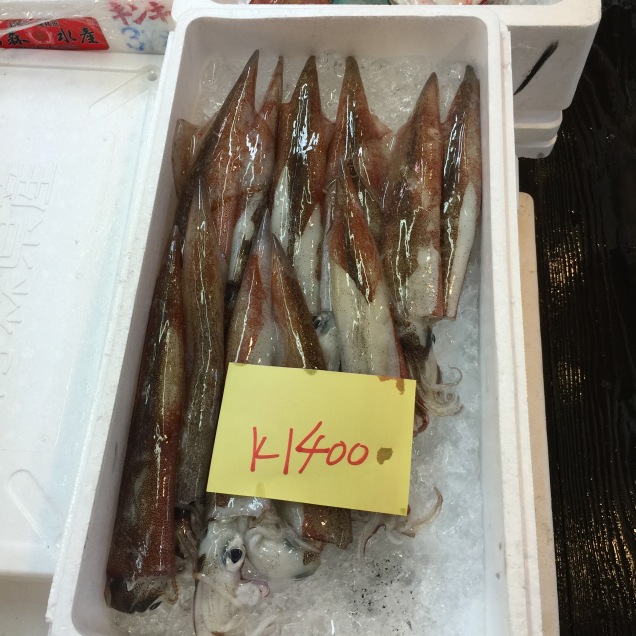 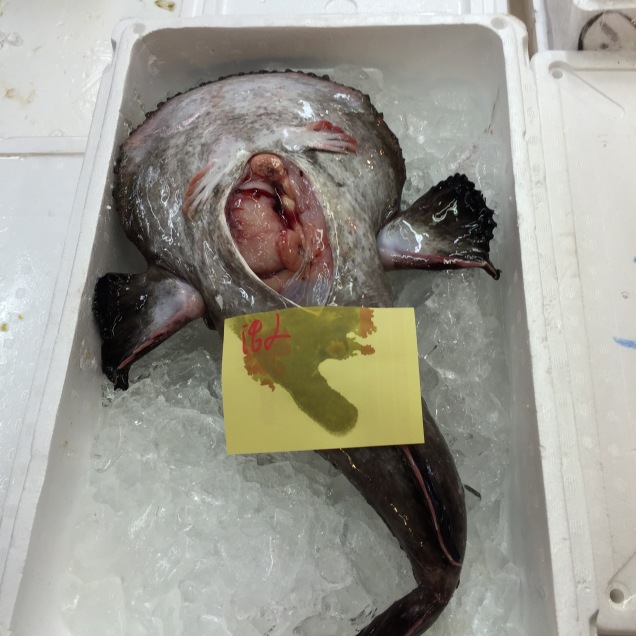 The sellers drove up and down the aisles on these trolleys at top speed and it was up to you to get out of the way, just to prove their point!

Here are some of the happy fish snaps we took on our gawking tour:

These are tuna eyeballs….. and that’s all I have to say about that!

She called these prawns, but I think that might be the Japanese word for “cackers”.

And here is the best art installation I’ve seen since that exhibition of “Pile o cardboard” at the back of Rigters IGA supermarket!

After the market we ventured into the surrounding market where the sellers were a little more friendly – because they sold their wares to the general public and there are also 100s of restaurants that were originally established for the workers of the market, but now the GP (general public) frequent them.

This chap was quite skilled at sharpening the knives…. don’t let the bandaided fingers fool you.

And this chap was blow torching a seafood extravaganza in a scallop shell.

We stopped off at a little place who were quite happy to take anything containing eel off the plate for us. This was the crowd we were working with to secure a place in a tiny restaurant.

I was able to use my favourite and only remembered (without having look it up) Japanese phrase – Oishkatta Desu – That was delicious!  The people in the restaurant were all very supportive.

Japanese people love to queue – I might have mentioned this before, but here’s a bit of proof.  Our guide, Yoko said, “yes, we see a line and just jump on the end just to see what what’s good at the other end.” 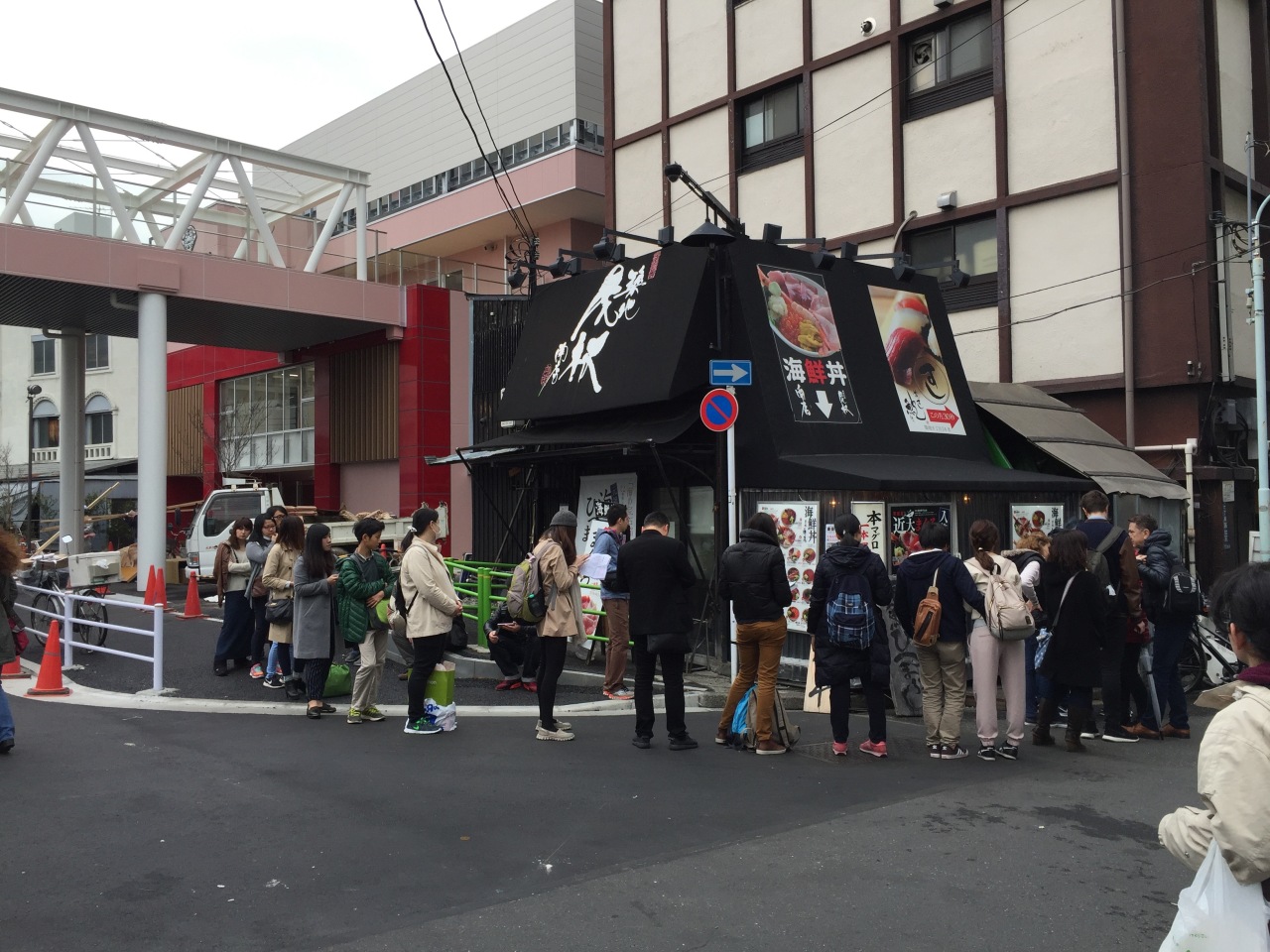 More walking around led us to a Shinto Temple where for a couple of hundred yen you can lucky dip to see how lucky you are.

I was not no so lucky, receiving a score of “unlucky”

For the people who don’t like their fortune, they tie their bit of paper to the trees in the hope that the Gods might turn their luck around.

I’m hoping the Gods can help me beware of small injuries as a result of inattention!

Check this out – this building is the Asahi beer Head Quarters and they’ve made the building to look like a glass of beer – with froth on the top. 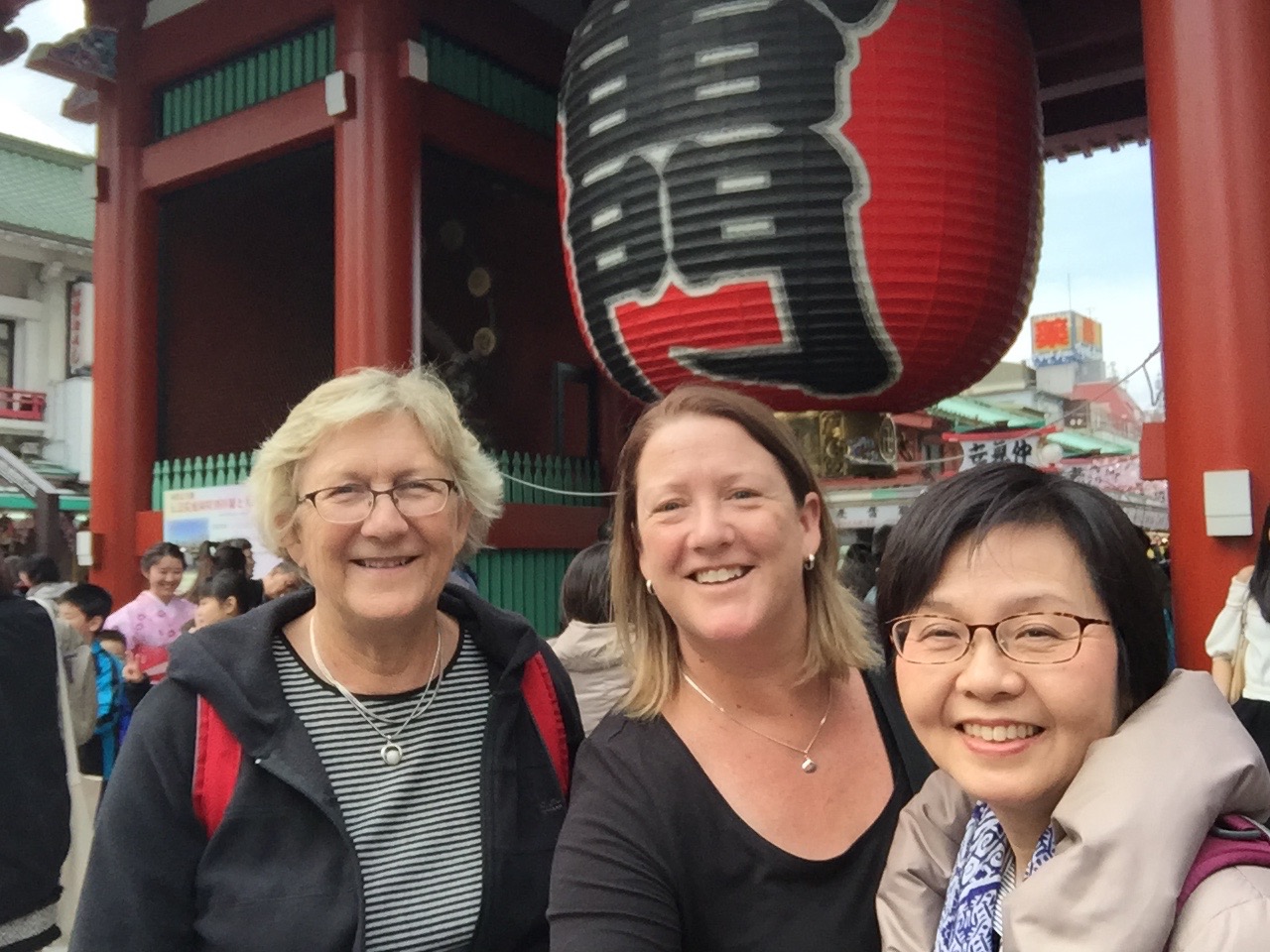 Billions of people like to come and visit this temple and some even like to dress up on kimono dress.  Apparently the people who dress up are generally not Japanese, but Taiwanese or other Asian countries. 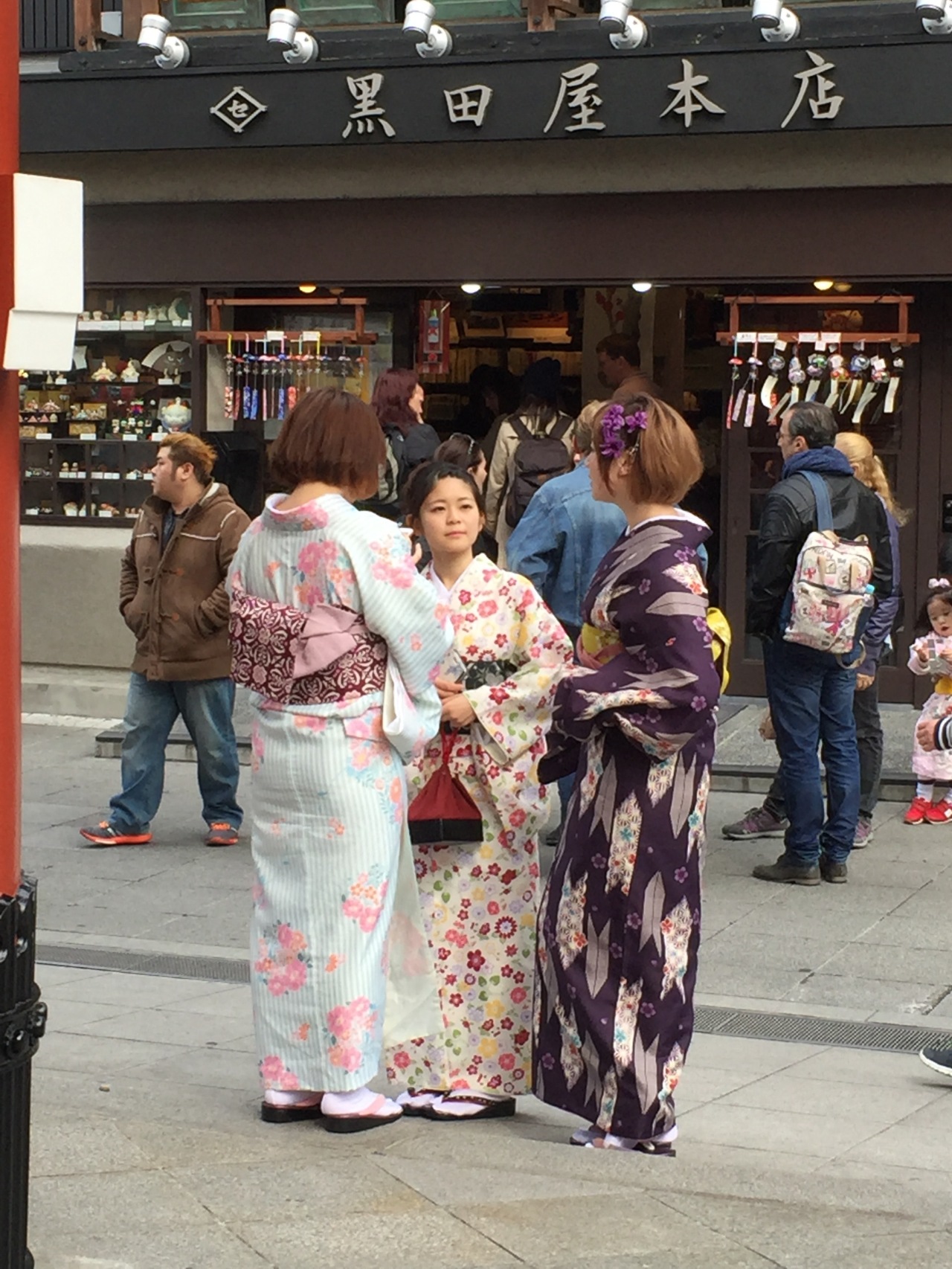 Between the oldest temple and the Buddhist temple is a Nakamise Shopping Street – filled with souvenirs and junky trinkets.

The Buddhist temple used to let people in to pray, but once they came in the morning and somebody had graffitied it, so now they keep it locked up and and nobody is allowed in anymore – there’s always one who ruins it for everybody else!

This chap caught my eye when his head popped into my frame….. 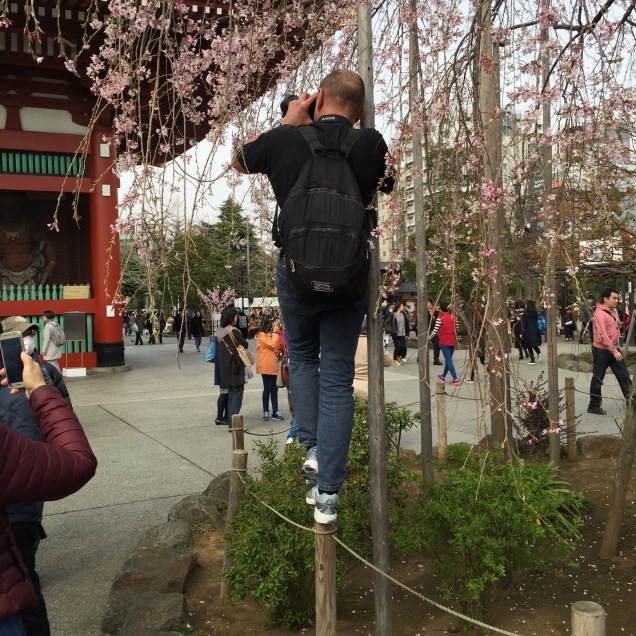 And then he just popped up in front of us everywhere with his subtle and unimposing photographing technique.

A little wander around the temple garden…. 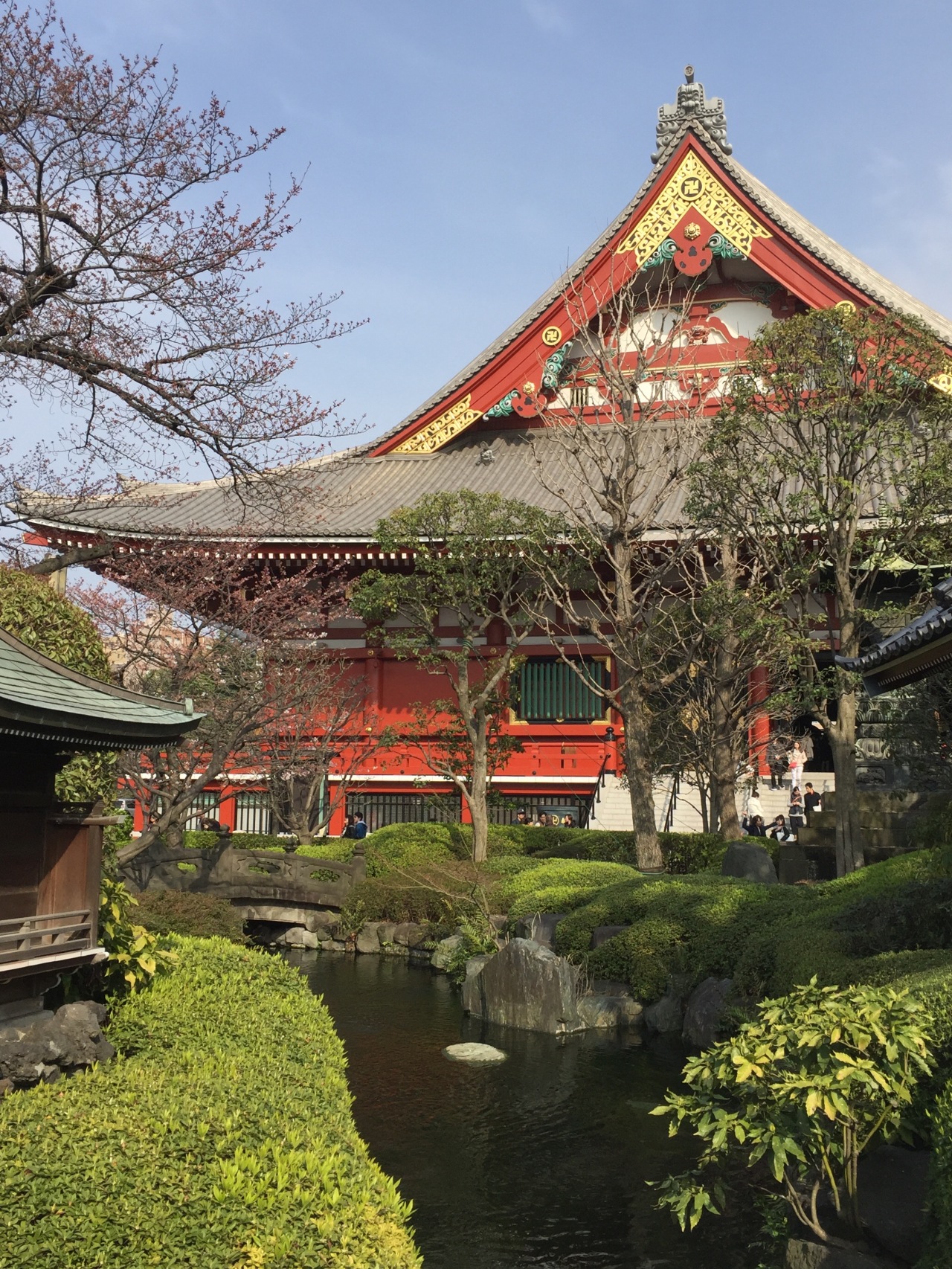 which was lovely with it’s bridges and koi 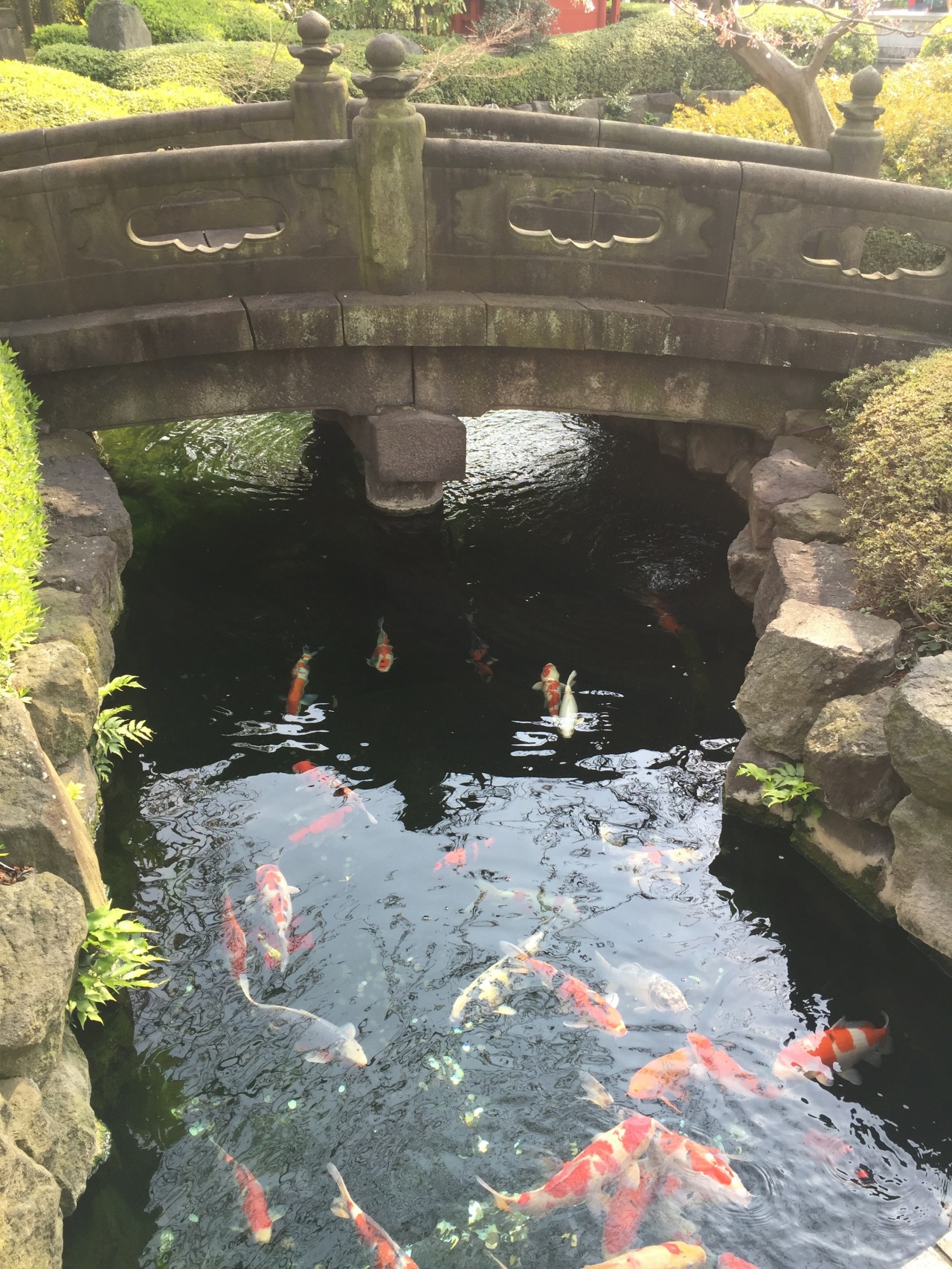 and waterfalls and trees 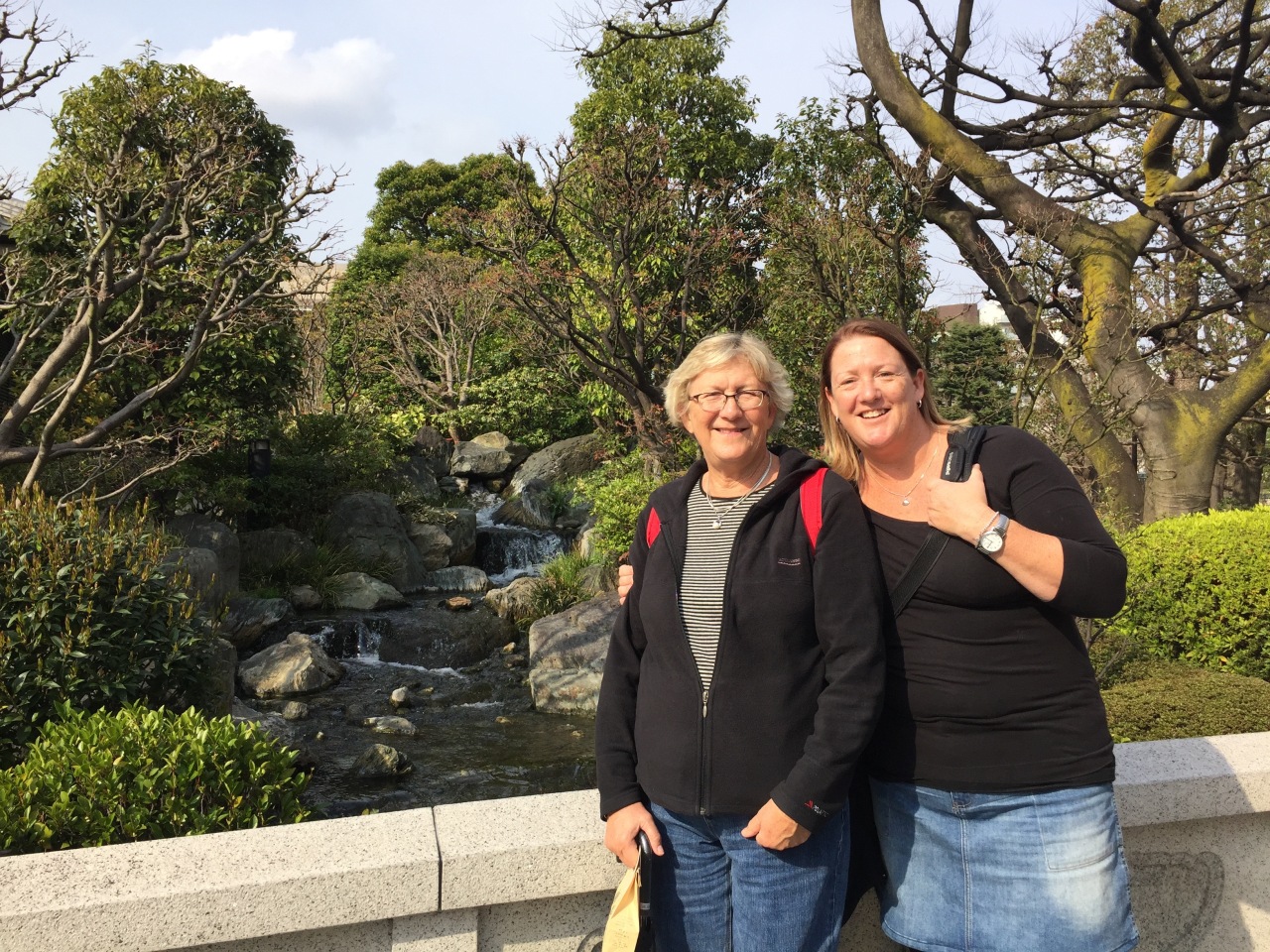 And young ladies dressed in kimono posing for photos for each other – seriously there were hundreds of scenes just like this one.  Apparently getting into a kimono is not easy  on your own.  Yoko told us that whenever she needs to wear kimono, she goes to the beauty parlour and gets them to help her. 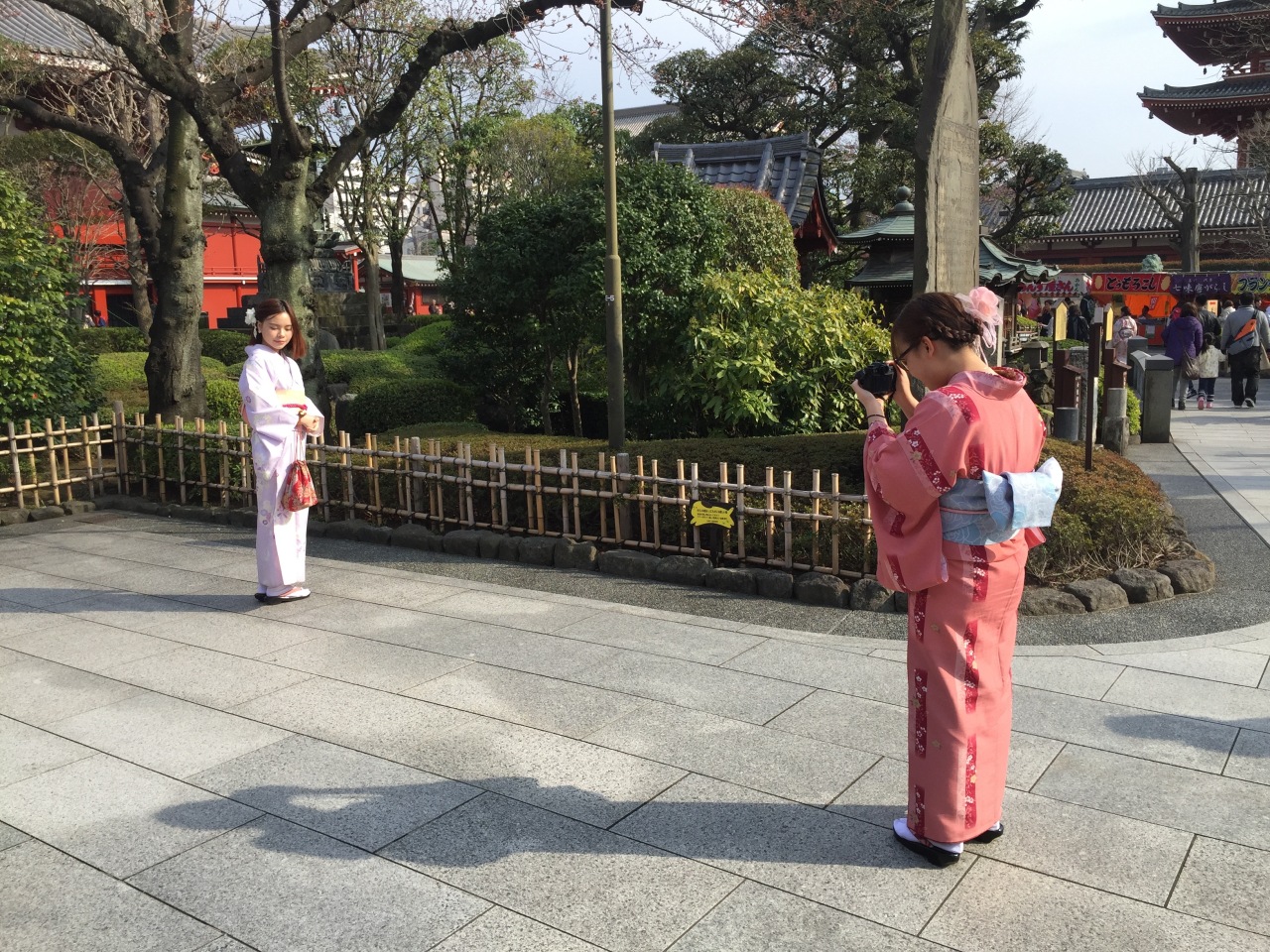 Right next to the temple is the Five Storied Pagoda, aptly named because of its five stories.

The five stories represent: Earth at the bottom, Water, Fire, Wind and Heaven at the top. 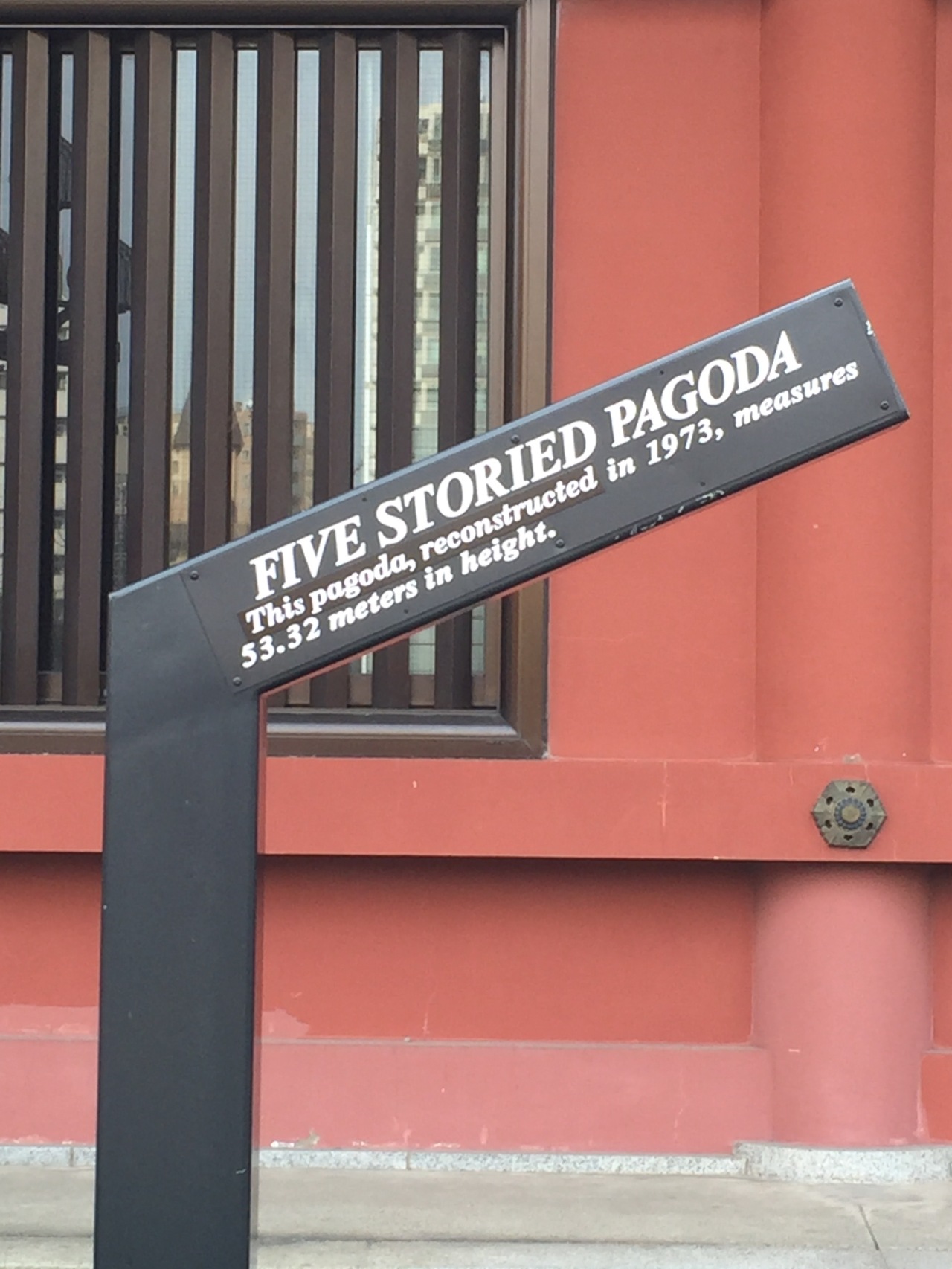 This pagoda was founded in 942 and was rebuilt in 1648.  It burns in 1945 during the WWII and was reconstructed in 1973.  On that occasion, memorial tablets of devout believers who had passed away were placed in the pagoda’s foundation, and a bone relic of the Buddha presented by Sri Lanka was placed in the topmost story of the pagoda.

The last stop on our epic tour today was to Harajuku, which is Fashion Central in Tokyo.  Walking down the street here felt more like you were walking down the Champs Elyse in Paris with its high end Shops.  Yoko kept asking us if we wanted to go into any shops and buy something.  Jenny told her we only had small bags and didn’t have room to buy anything.  We also didn’t fancy telling her that we shop at Target!

The streets in this area are much more quiet and peaceful

Until you get to Takeshita Street where all the teenager hang out.  This is also where the kids like to dress up as their favourite Manga or Anime character.

We did pass a few girls dressed up, but I couldn’t bring myself to take any photos… Here’s one from the Google. 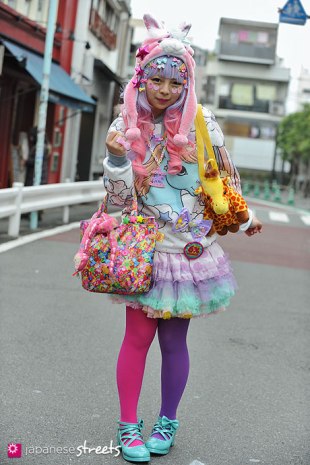 This is also the street to come if you are need of a horse head mask…. just fyi.