Today was all about the shrines of Kyoto – we weren’t going to see ALL of them, but we were going to go close.  Today we had a tour guide who was going to take us to all of the ‘must see’ spots.

Our first stop was the Golden Shrine.

On the way through the gate there was this small pavilion with a large bell.  People go there and put in their wish for their future – apparently it’s a very popular spot on New Year’s Eve with people trying to get their resolutions in before it’s too late.  Our guide said it gets very noisy with all the bell ringing. 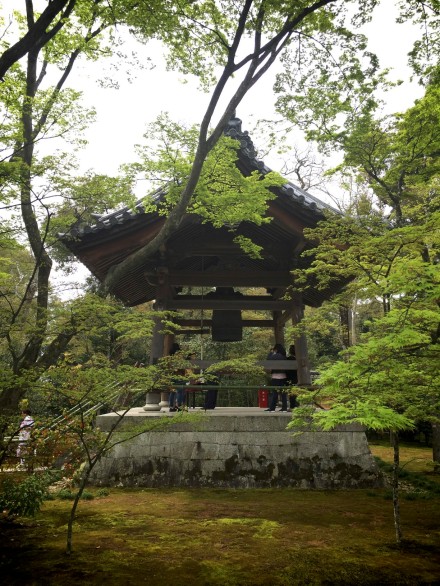 This is us red red ready to see ALL the shrines. 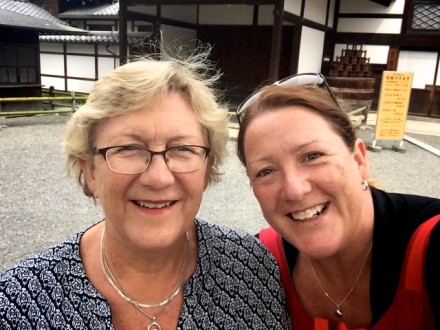 Our ticket for the Golden Shrine – it gives you passage through the gate and it also wishes you good luck.

Our guide, Hideck insisted on using his tour guide flag in case we lost him although we were never more than a meter away from each other at any one time.

This is what the Gold Shrine looks like in winter.

And this is the inside of the upstairs section.  The floor is painted with lacquer to give the illusion of water.

Nobody is allowed inside the building except for very special occasions or if you’re George Bush Senior – he got to go in there once on a visit. 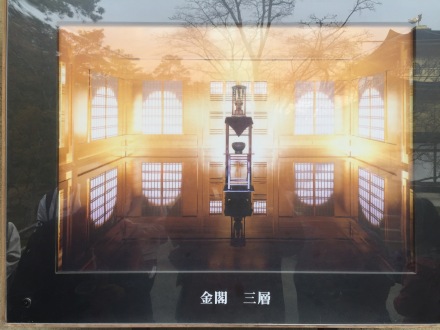 There are beautiful gardens and ponds all around the shrine.

There was a special section where you could have tea. 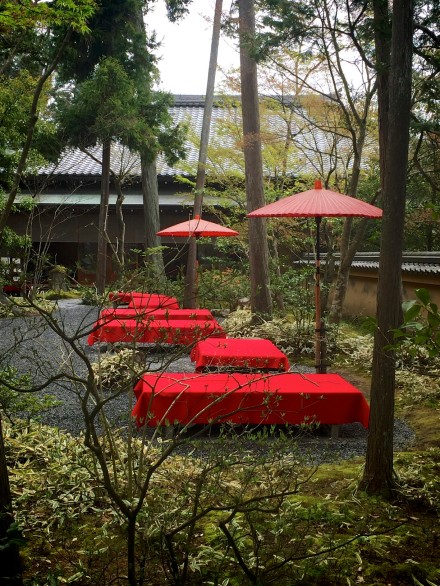 Burning incense is an important ritual in the Buddhist religion.  The smoke is very symbolic and people like to make sure that the smoke touches their body, especially their head as they believe it will heal them or make them smarter. 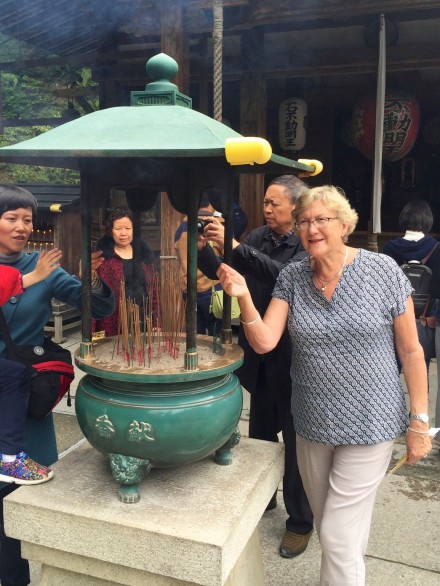 Then they ding this big bell to wake the spirits and make sure their thoughts and prayers have been heard.

Seriously – we were walking along an empty street and Hideck still thought it was necessary to use his tour guide stick.  He was not going to lose his group – no way – not on his watch!

And the pointer comes in so handy for other things…. 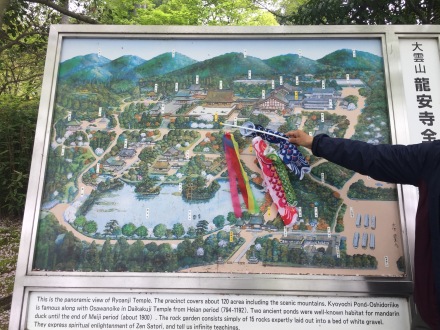 We were now at the second of today’s long list of shrines – the Ryoanji Temple.  Inside the gates is the Kyoyochi Pond.  This pond was made in the late 12th century.  Until recent years many mandarin ducks were to be seen on the pond.  Hence, the Ryoanji was generally known as Oshidoridera, the temple of the mandarin ducks (pretty imaginative if you ask me).

Buddha sits peacefully at the bottom of the steps that lead up to the Kuri, the main building of the temple. 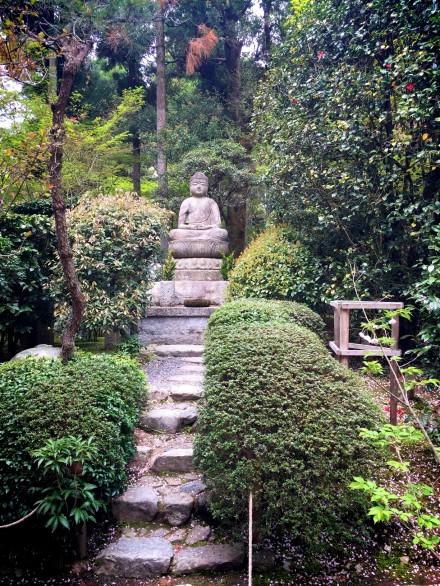 Inside the main building is The Rock Garden.  It is simple and quite remarkable, measuring only twenty five metres from east to west and ten metres from south to north.  The rectangular Zen garden is completely different from the gorgeous gardens of court nobles constructed in the Middle Ages.  No trees are to be seen; only 15 rocks and white gravel.  The walls are made of clay boiled in oil.  As time went by, the peculiar design was made of itself by the oil that seeped out.  This internationally famous rock garden was said to be created at the end of the Muromachi Period (around 1500) by a highly respected Zen monk, Tokuho Zenketsu. 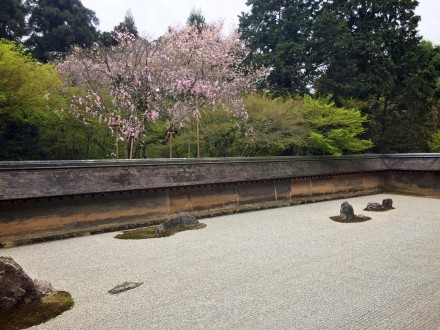 Apparently, the garden has been designed so that you can never see all 15 rocks from any one spot because to see them all would mean you had achieved perfection and a big Buddhist teaching is that nobody is perfect and we should all strive to work harder to better ourselves.  I counted 14…. apparently it helps to see more of the rocks if you are taller.  Hideck said the garden was designed with short Japanese people in mind.

This is a small replica of the rock garden with braille signs so that the sight impaired can also enjoy the garden. 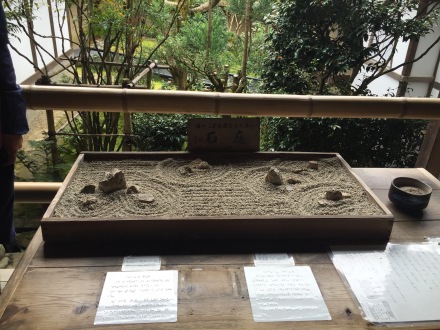 There are all sorts of “Zen” bits and pieces around the temple…. this bamboo water spout for one.  The water drips into  a bowl that is shaped like a Chinese coin.  It has Chinese characters one each side of the square that basically spell out (in the most confusing way possibly) “Money can’t buy you happiness” 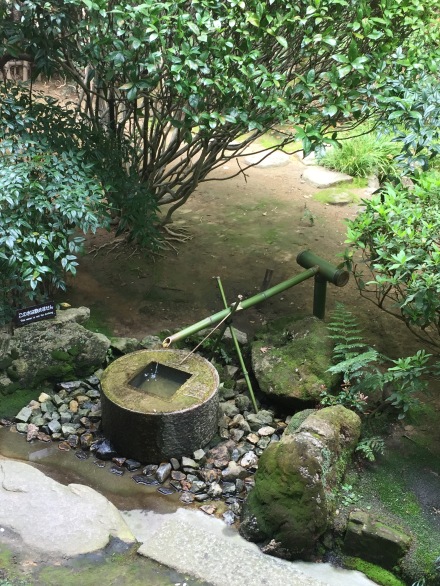 I tell you what wasn’t Zen-like was these red buckets.

Something else not so Zen – these people frantically working in this office.

As always, shoes off when you go into a temple.  I didn’t see any others that I liked on the way out, so I just put my own back on.

From this temple, we hit the local train station which was quite a pretty walk…. 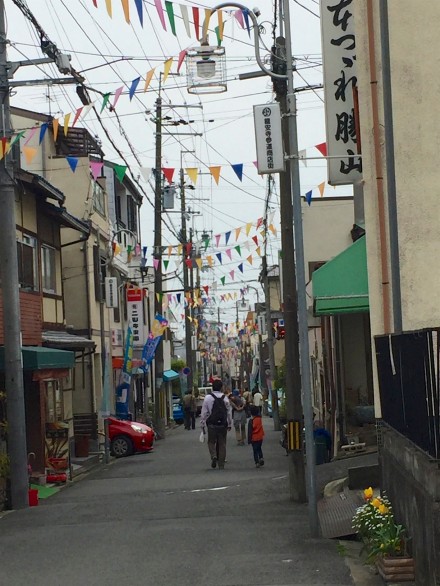 … past some interesting parking set ups.

And when we got on the train – it was all decorated with cherry blossoms – heaven knows what happens here during the other 50 weeks of the year! 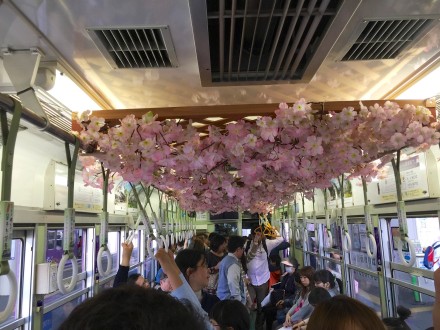 They even painted the train especially for this cherry blossom season.

This area, which is full of tourists had quite a few of these rickshaw ‘runners’.  When I took this photo I thought the panda was just a stuffed toy, but on closer inspection – I think that could be a person in a panda suit!!!

Then a stop for lunch.  How lovely does this lunch look?

Apparently all the bowls have been chosen to compliment the colour of the food. 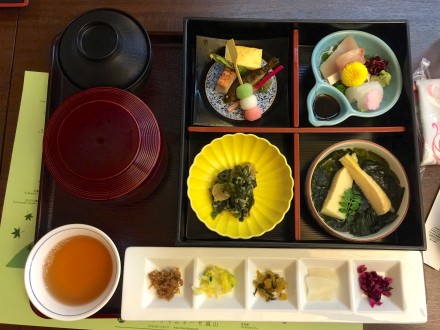 Next stop – the Bamboo Forrest!

Kyoto is mainly quite flat, so there are lots of bikes around and they weave through the people quite fast.  Someone else who was whizzing through the people today was this speed demon.  No beeping, no ‘excuse me’ and no slowing down – just ploughing though!

There is a shrine with the Bamboo Forrest where people, mainly young ladies, come to ask the spirits for a good partner, to be married soon, etc…..  They write their wishes on these wooden plaques and then hang them here.  The plaques are eventually burned and the wishes are meant to rise up with the ashes to the spirits so their wishes can be heard and hopefully granted.

Then they pay some money (a donation) and line up here to make their wish and ring the bell to make sure somebody up there is listening. 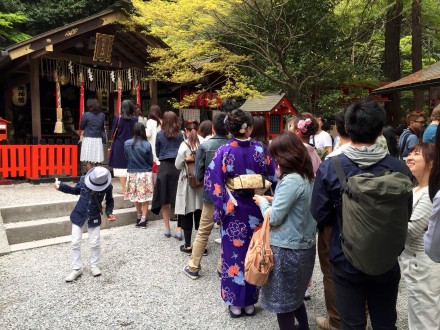 You know how earlier I was telling you that I couldn’t find a picture of a couple who dressed alike?  Well, here is a couple!  Not the ones in the kimono – the two on the left – matching jackets, jeans and shoes!

The Bamboo Garden was absolutely beautiful.  Really calming and quiet.  The height of the trees blocks out the noise from the outside world (except for the occasional train as the tracks are right there!) 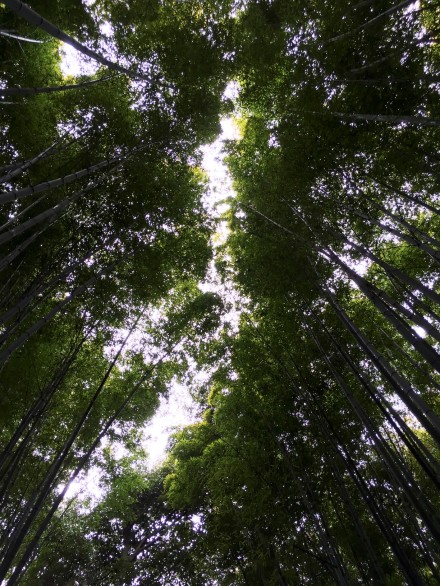 Quite a magical and serene place.  Imagine it with no people…..

We hiked up the hill a bit to this look out which was just glorious.

Look at the colours!  I can only imagine what it would look like in Autumn! 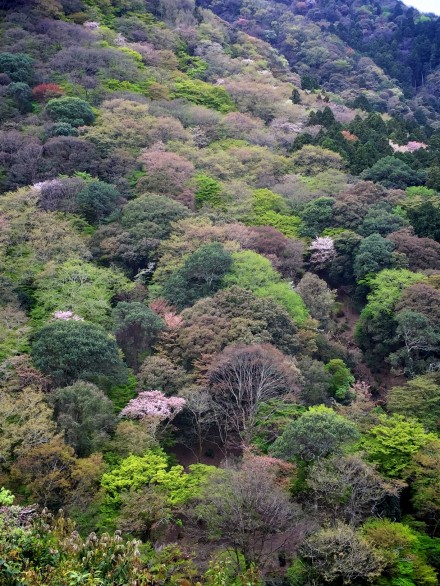 The scenery is almost as pretty as Me Jenny!

This poor man was trying to sit and paint.  The poor girl was behind him trying to take a picture I assume of what he was painting.  At one point she got so close that her camera was almost sitting on top of his head.  Then she slipped a bit and all I could imagine was him and his easel going flying.

Next on our tour of shrines was the Tenrū Temple.  The temple itself was pretty standard, but the garden here was beautiful.  Here are some of the flowers….. you’re welcome. 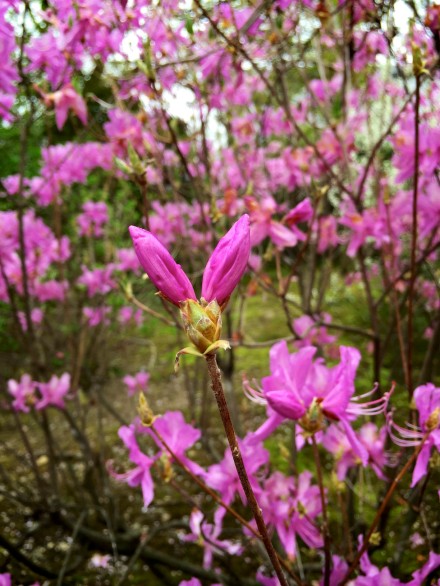 I wasn’t the only one here fascinated with getting up close and personal with the flora. 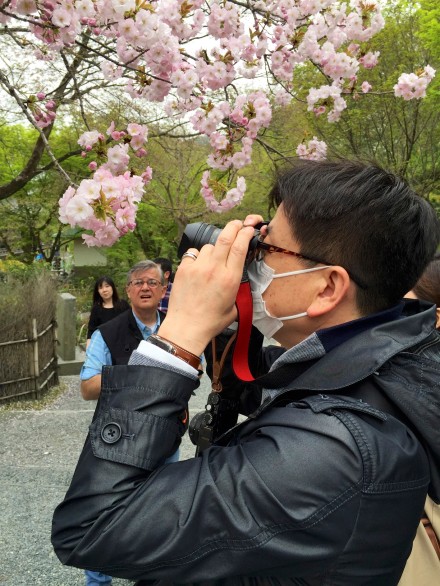 And these little blossoms…. bless 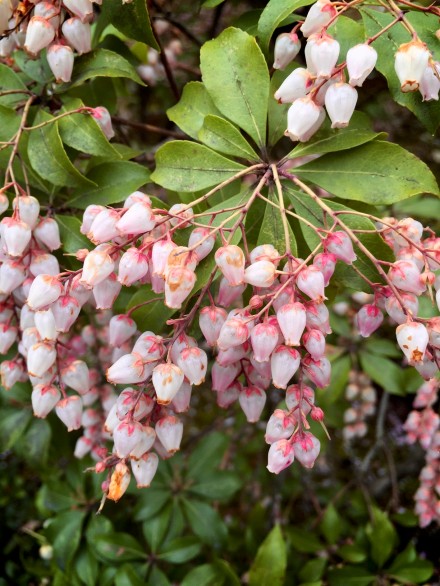 This temple also has a pond – with water so clear.

The pond is full of massive carp.

And….. this is what it would look like in Autumn!

And that is it for the temples!  We made it!

This is one of my favourite photos of the day.

People jostling and pushing and manoeuvring to get a good spot – me included!

So we hightailed it out of the temple and down one of the busiest streets ever (no photos because I couldn’t raise my arms from by my sides) and then emerged on this bridge.

This is what everyone was coming to look at.  The river has been dammed and so the people take advantage of the flat, calm water to paddle in boats.

The couple you can see who are perilously close to going over the edge there tried in vain to paddle their way out for a good 20 minutes, and then as we crossed back over the bridge, we saw the brown boat with the outboard motor towing them away from the edge.

There was also this chap giving a bit of entertainment.  I don’t think he was busking as such, but practising the skill of twirling this star shaped material.  He was really very good.

On the way back to the train station Hideck walked us through the Kimono Forrest.

Hundreds of poles all lined with kimono fabric 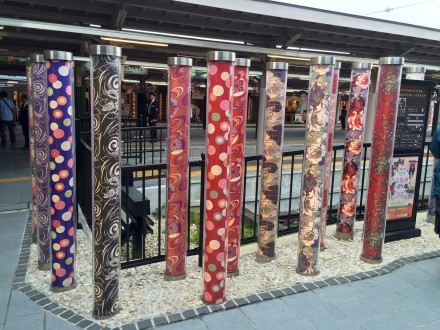 they light up at night and look amazing – such a great idea! 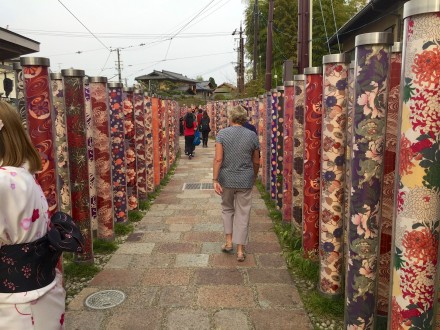 Then it was back to the train station and here’s what we passed in the back streets…. 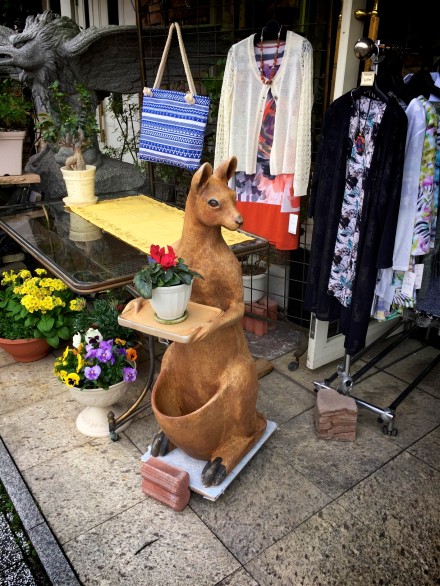 And two more people dressed the same!  I told you they were out there – exact same shoes and everything! 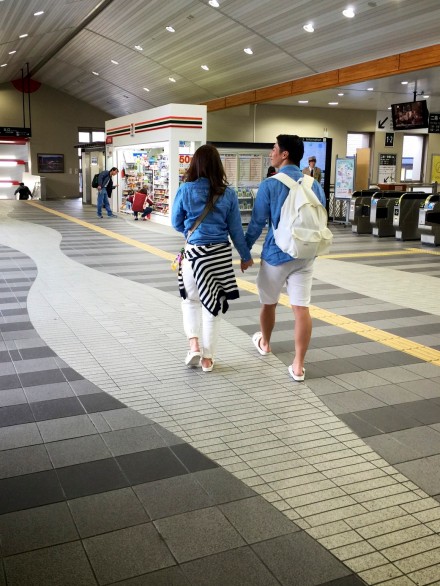 Not a bad effort.

Now we’re exhausted and all shrined out

(possibly the title of a Weird Al Yankovic version of Alison Moyet’s “All Cried Out”?