So we got on the train, only slightly worse for wear and settled in for a 2 hour journey to Bordeaux.  Feeling a little peckish, I walked down the food carriage to purchase myself a tasty snack.

Except, this is what I got.  Possibly the only place in the whole of France where they didn’t put any special love into their food. 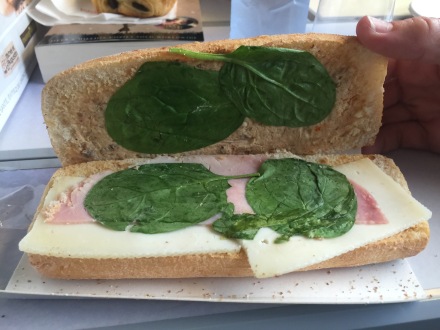 Jackie noticed my feeling of slight underwhelment (yes, that is a word) and offered me contents of the pantry that she and Brian had been carting with them since we left the boat and I was able to beef up my sandwich to acceptable proportions.

We were met at the station by Corrine, a lovely lady whose guest house we were going to be staying in – about 12 minutes drive out of Bordeaux.  She picked up our bags and we walked  up the boardwalk in the city… 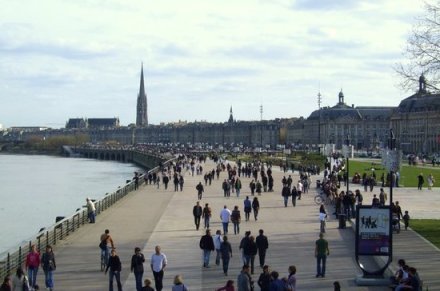 Crossed this amazing bridge and had lunch at a place that served awesome food and overlooked the whole city. 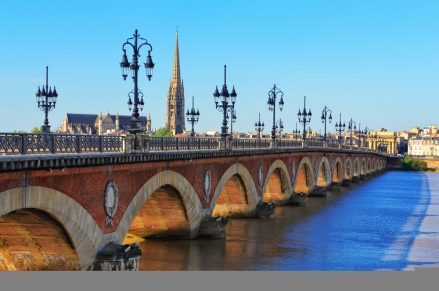 Our thought was that we would walk down to the next bridge, cross over and have Corrine pick us up back in the city….. We walked through some of, what could only be described as Bordeaux’s back blocks…

but when we got there, the bridge was open and wouldn’t be going down until about an hour later.

Apparently, the only boat that went through was a flat river boat – so lifting the bridge to its full capacity seemed like a bit of overkill!

So, it was back through the back blocks and Corrine picked is up near the restaurant where we had lunch.  Not what you would call a successful day of sightseeing so far… We drove to our new abode of the next three days and we weren’t disappointed.

A beautiful French house – or simply ‘house’ as they call it here in France. 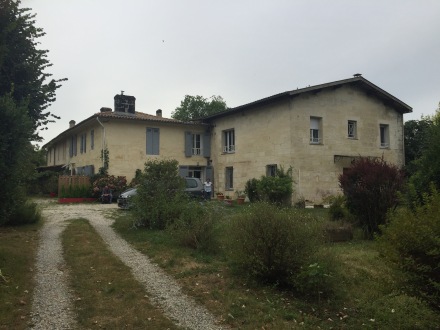 With a lovely French country driveway

Complete with pool – it was a pity that it was too chilly to go for a swim.

There was a couple of cats that kept us company…

Deb looking very happy with herself about all the fabulous accommodation that she has organised – and rightly so!

Plenty of room for lounging… 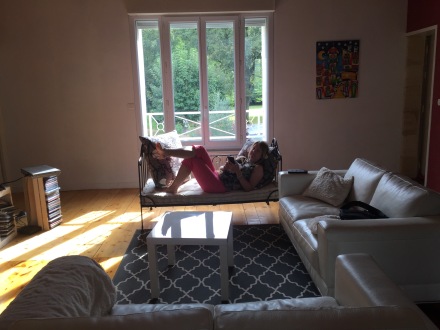 Day 2 – Corrine dropped us off in the city again, this time to do some exploring.

We managed to walk up one street – the longest shopping street in Europe, apparently.

We were really going all out to have a French experience today.  We walked all the way up the street to this archway which marks the end of the longest shopping street, ate a kebab and then…

… caught a tram to the wine museum.  Apparently the shape of the building is meant to represent an upturned wine bottle?  I can sort of see it.

So there’s a little bit of wine available here and we started our tour of the museum with a little wine tasting.

Which made the technological interactive displays more interesting.

This one was everyone’s favourite…  you squeezed the perfume puff thing and then put your nose into the trombone bit and got to smell the flavours that you would normally smell in wine. 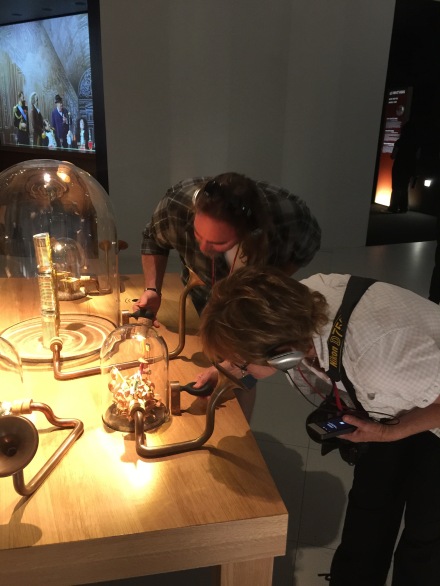 Then these displays showed what texture wine can have – smooth, furry, creamy

To keep the theme going, the next day Corrine took us to another wine museum experience… where we got to do some more smelling and trying to guess the smells.  We played name that bottle size…

Which is apparently, in France, is a game for kids as well.

Then we did some more wine tasting.  By now, you’d think we knew what wine tasted like… 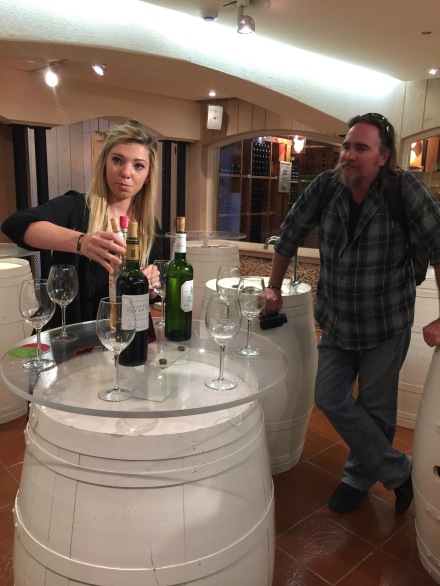 This is Grace, who is English, but has lived in France since she was a young girl.  We all thought that she would be a great match for Prince Harry.  We are currently in the process of writing a letter to HRH to set it up.

Then it was time to shop in the cellar.  Some of us were more excited than others.

The wine was lovely and really cheap, so we bought lots of it! 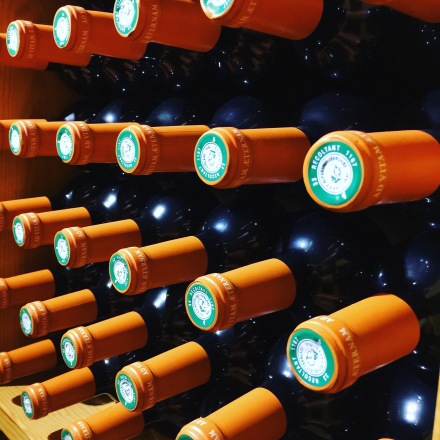 Corrine had suggested lunch in a winery called Le Terrasse Rouge.  We were quite excited about this prospect because there was going to be wine and food involved.

On the terrace, there are these little red pebbles that are laid out to make it look like red grapes.

It was very busy when we arrived as there was a bus load of American tourists, plus two huge tables of English people who were part of a wine club, so we were told to go and sit by the wall until our table was ready.  We all felt like we had been sent to the principal’s office. 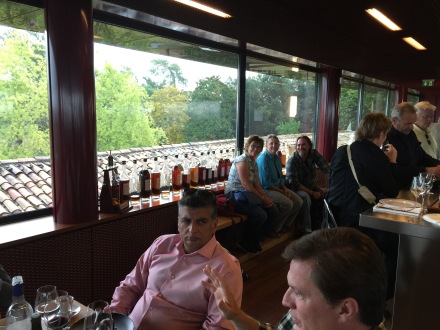 We all felt guilty about something, but didn’t know what we’d done! 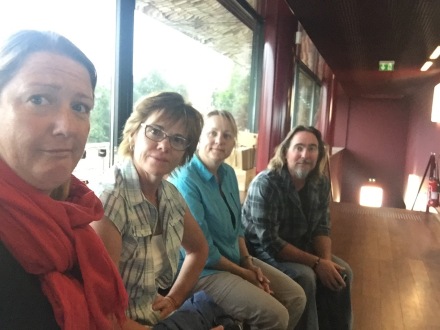 Then when they did sit us down the people who had just got up from this table had sacrilegiously left uneaten desserts!!!!  What sort of place what this where their customers would do such a thing? 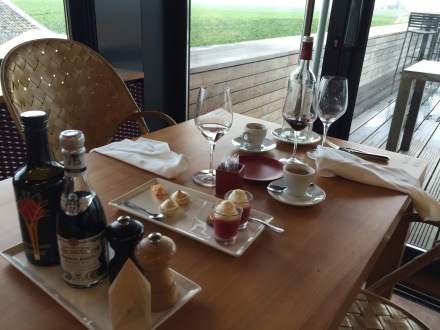 We were handed a tablet wine list and a menu by a waitress who wasn’t one bit interested in being there let alone serving Australians who couldn’t understand French. 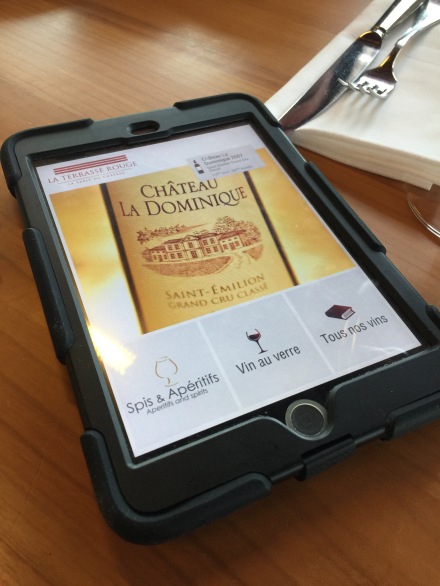 We ordered our meals, cutlery was thrown down on the table randomly, and we all felt a little uncomfortable, like we weren’t really that welcome….. soon enough the big groups cleared out and the restaurant lost most of its ambiance.  I mentioned our waitress to the manager at the till who informed me that she was leaving very soon…. great news for all concerned I think, except us who would never benefit from the move. 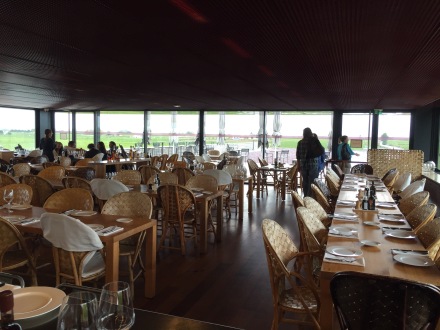 On the way home Corrine showed us this lovely castle that was being renovated by the owner.  It had been left to crumble, but they were slowly trying to build it up to its former glory…

We weren’t allowed inside, but we peaked through the windows and saw this…

Whilst Jackie foraged for berries and nuts and treasures…

and Brian was her favourite find… 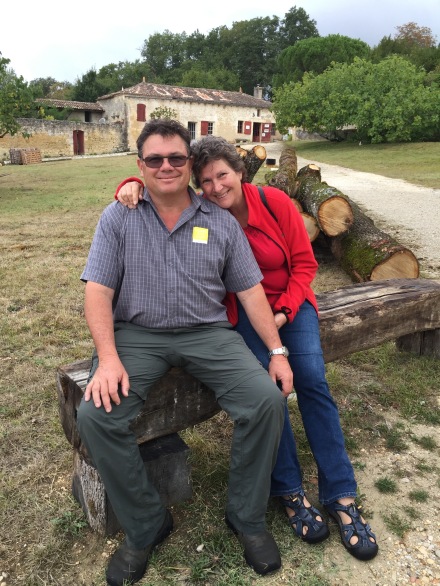 4 thoughts on “The Back Blocks of Bordeaux”