Each year there is a theme that the designers are supposed to work towards and this year’s was “Heavenly Bodies and the Catholic Imagination” – interpret that in any way you can – and the designers did just that.

Unless you are one of the who’s who and have paid $25K for your ticket or you’re in their entourage or have been employed to fan fabulously unnecessary dress trains, you can’t watch it live in person – so we tucked ourselves up in our fabulous apartment, made our own costume accessories and watched it live in the telly.  The Met is only 2.8kms away, so it was nearly like we were there.

ML had her hair done professionally by her roommate for the occasion.  This braid is called the “Catholic Imagination of the Stella Maris School Girl Plait”.  So on trend.

ML got to work in hand making our accessories for the evening out of household items. 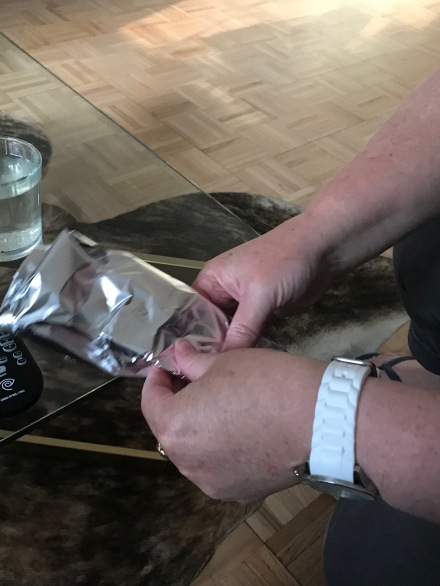 This is her first masterpiece, I’ve coupled it with a cardigan and decided not to brush my hair or apply any make up.  I’ve also let the clasp of my necklace fall nonchalantly to the front. 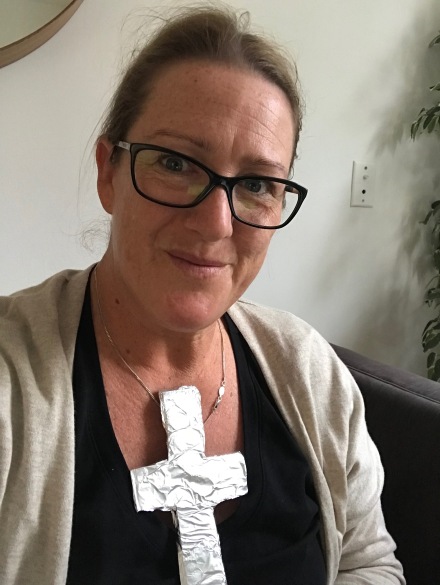 And as always, just like when making pancakes, the second batch always come out better than the first – this one is attached to our interpretation of the rosary bead.

And displayed here demurely by ML herself – the designer and handicraft worker.  It’s amazing what you can do with a bit of cardboard and tin foil! 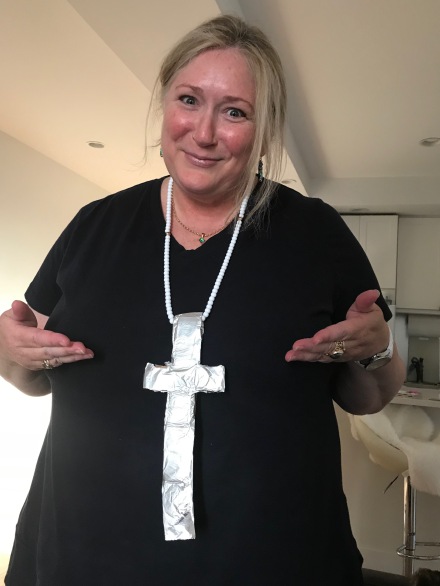 The first to arrive were George and Amal.

Then Queen Ri Ri.  This dress must have been super heavy,  that’s why they had to keep it short!

These stick on face tears seemed to be a thing, quite a few people were donning them, or versions of them.

Katy Perry didn’t disappoint – she had to arrive in a convertible car, that would have been dicey ride in a strong wind…. also, I would have liked to have seen her sit down to dinner. 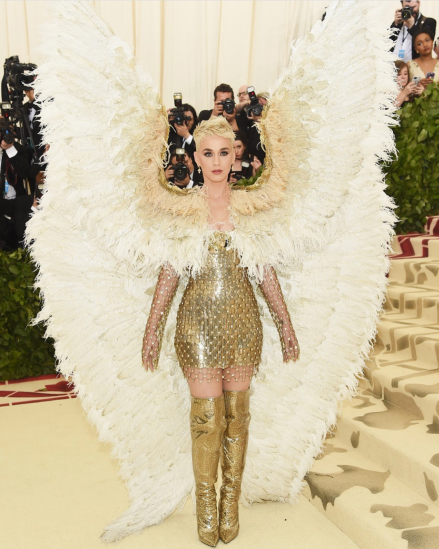 This lady – sorry, I don’t know who she is was sporting the same hair do as ML!!!  OMG – we are so bang on trend right now.

I’m not sure if these two ladies know what’s going on or if they know where they are.  They seem to have made a career out of this startled gazelle look and good on them for following my lead and saving money on hair and make up.

Remember to:
smoulder ✅
pout ✅
one hand on hip ✅
cock hip out ✅
other arm straight down holding clutch ✅
show the right amount of thigh ✅

And Madge – She’s had this JPG number in her wardrobe for decades just waiting patiently for the correct theme to be announced!  Apparently she performed her “Like a Prayer” number once she got inside…. not impromptu – she was asked to do it.  Hugh Jackman filmed a little bit of it for his fans on Instagram.  Thanks Hugh and thanks Madge.

So, that was that.  There were a number of people that we’ve never seen or heard of before and there were a lot of people who didn’t read the invite the whole way through and just wore regular dresses.  It also inspired me to head to Macy’s to see if I can’t find something of a similar ilk to where to the Midwest Charity Begins at Home Gala Diner this year – Their theme is “Circus”, so I’m sure I can make it work.