Besides Deb, the other woman responsible for organising a major section of this trip is a lovely French lady, who lives in Queensland named Pascale.  She is the proud owner of www.visitmyfrenchvillage.com.au and she was the person who put us onto our converted bull stable, next to a lovely château in the quaint town of La Chapelle-Caro in the middle of the French region of Brittany…. although in France, I think they’re just called ‘regions’.

On our first night there was a ‘rave party’ being held next door – see the marquee? Well that doof doof music went at full throttle until about 8.00am.  I didn’t hear it because it has been established that I could sleep for Australia in any Olympic games you care to name.

This is the château that we didn’t stay in and were advised not to venture too close to…. there is obviously a story here, but we are yet to find out the details from our host, Edward. 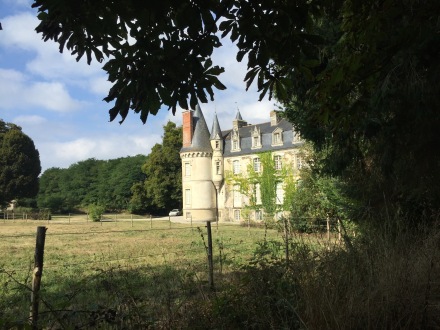 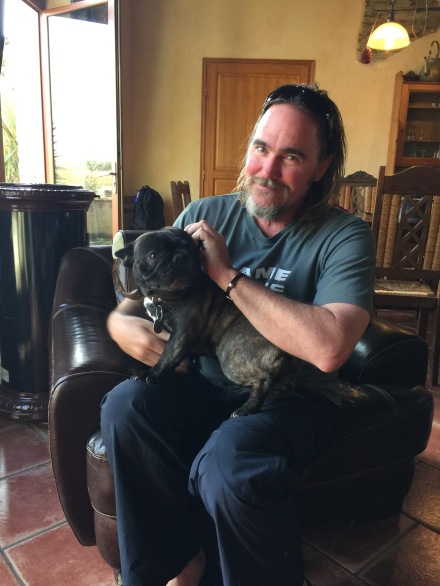 and there’s a beautiful cat called Bella who has made herself completely at home – even sleeping with me on the odd night when I’ve carried her all the way up to the third floor and held her down….. I’m joking.  Or am I? 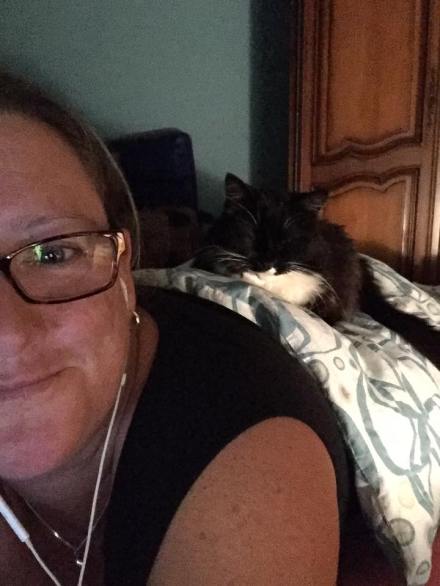 Edward, our host, who lives in the house next door told us all about the places to visit close by – one being a pub in the next village along the canal.

But Jason, Deb and I chose to go down a different path and across a field in order to get to the canal path… having to walk through stinging nettles…

You don’t want to walk through these if you can help it. 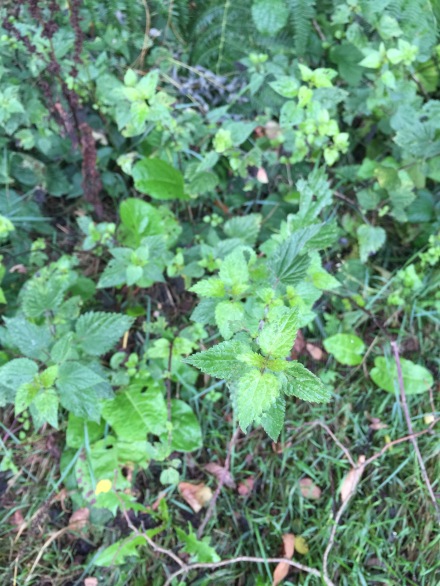 And if you do – look for these leaves.  Now, I’m not a botanist and I don’t want you to take this as gospel, but I think these are dock leaves and that’s what you should rub on the area that has been stung by stinging nettles.  I learned this from my Holy Trinity students on a forest walk back in my teaching days in the UK.

So…. we couldn’t actually find any of these, but we found something else that sort of looked the same, so we probably just rubbed some random leaf on ourselves in the hope that it would help.  I think it acted as a good placebo, but that’s about it.

So, we walked about 2kms up the canal to the lovely little village of Montertelot which has one bar/cafe and one bar/restaurant – but doesn’t actually serve food that we’ve noticed.

The whole village is filled with colourful flowers.

It’s crazy how so many towns have embraced Jason’s visit by putting up these shrines to him!

The houses are quaint and some you would call elfinlike. 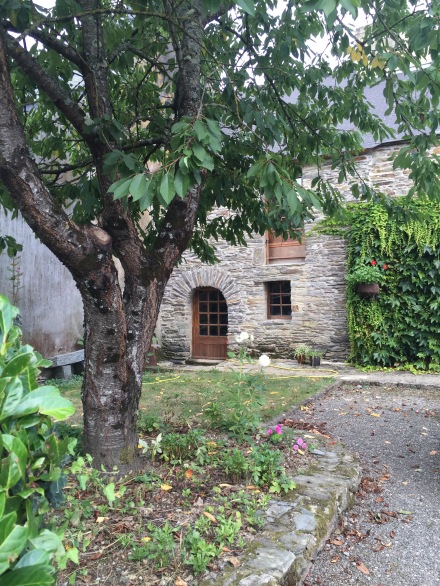 There are flower pots everywhere.  These ones in shoes are covering up the bins.  What an ingenuous idea! 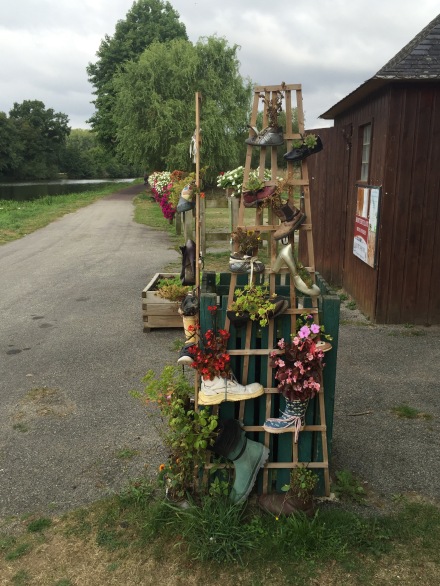 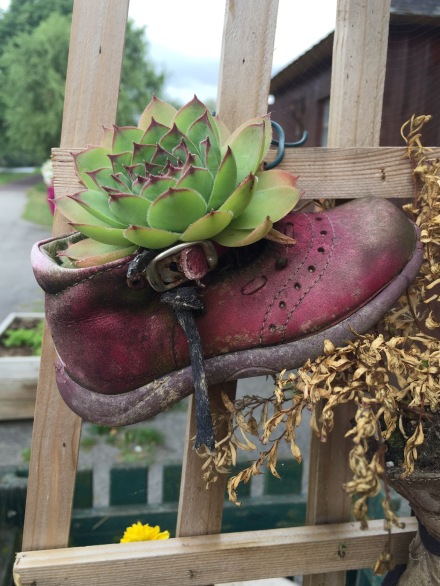 Other plants around town are in old painted soccer balls. 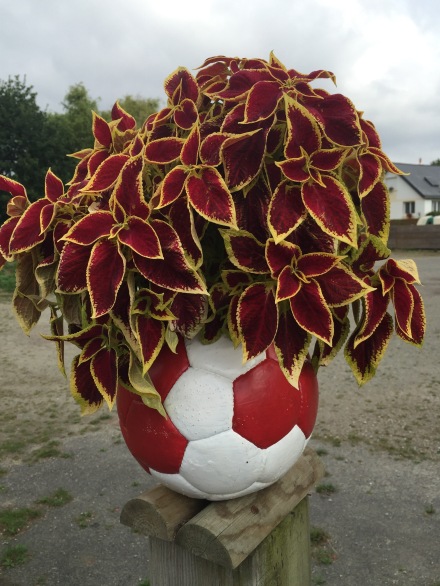 These are the lock keepers.

The day after we arrived there was a special Heritage Day in France and we’d been told about a place that’s a little bit like the French version of Stonehenge – Menhir or ancient megalithic standing stones.  Menhirs have been found all over the world   So, we checked out the ones right near us.

Is it down that path?

Which way should we go?

Apparently this is what it looked like back in the day. 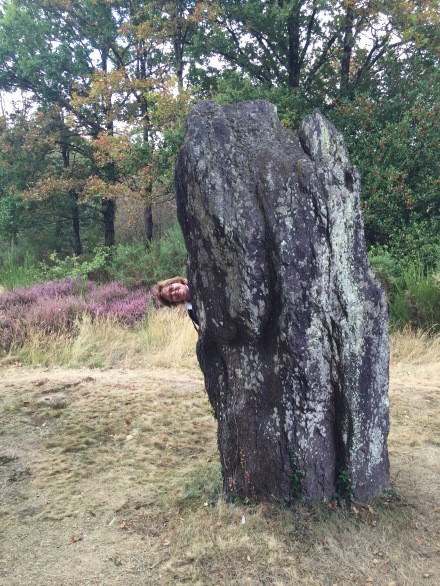 This was probably a sacrificial stone, even though there was no evidence that the people back then sacrificed anybody/anything.  This stone probably just fell over.

Apparently these stones have been here nearly since time began but the stones were only discovered  – and they have deduced, based on the tools that were found, that they were man made – as in people carved the stones and stood them up in that pattern.  Nobody seems to know why they did it though.  Regardless, we had a lovely walk through the forest.

Then after all that hard learning and walking, we all deserved a beer at a lovely pub in Augan.  Well, I had a panachè (French shandy) cause I was driving.

This pub brewed its own beer downstairs.  The crew tried out all three varieties – blonde, blanche and rouge and agreed that they were all pretty damn good and at 2.20 euros… it was some of the cheapest beer we’d come across.