After an entire day of doing absolutely nothing yesterday, today was all about doing something.

I have been wearing the same 4 sets of clothes now for 2 months, 1 week and 5 days so today’s ‘something’ was to find something to give the suitcase wardrobe a bit of pep.

En route to Oxford Street in London town I thought I was quite familiar with the trains and tubes etc…. But for some reason on this trip I can’t quite get my head around where everything is.  I keep getting off at London Bridge (I’ve done it 3 times now!), heading for the exit or to the crossing over tube line or even the overland train, only to realise half way there that I shouldn’t have got off at London Bridge at all!

When I lived in London many moons ago London Bridge was my go to station – all trains/tubes/buses and roads lead to London Bridge… but alas, this is no longer the case.  The fact that I wasn’t going to work should have been a clue!  If I suddenly turn up at my old school in Dartford, Kent, then I’ll really start to worry.

So, back I turned, followed my steps and got back onto the tube and rode it to my actual destination of Bond Street and Oxford Street – the central shopping strip of London.  I actually remember it being a bit more full with high street named chain shops, but this time there didn’t seem to be much on offer or it perhaps it was that there wasn’t much I cared for.

When you start seeing fashions like this on the street…

…you start to wonder if there are any shops left that sell the stuff I like.  I mean, I’m a simple sort of dresser;  I don’t ask for much, but I’m not sure who is designing the crap in the stores today.  I mean, this girl in the picture above, who is probably a lovely lady, is wearing cut off denim shorts that have had pleather legs sewn onto them.  That can’t be right, can it?

After about an hour of shopping misery I decided to drown my sorrows in some lunch and headed for a Carnaby Street eatery where I could watch the world go by.

I had the perfect view of a lady, who was obviously trying to spread to word about something to do with animal welfare or something.  I guessed this because of her cute ears on the top of her hoodie.

She spent about 20 minutes dramatically waving at people as if she was one of those Times Square Elmos and pretending to be a cute animal with little paws. When people looked at her a little confused and just walked by, she would lean back and give them a big two handed wave. 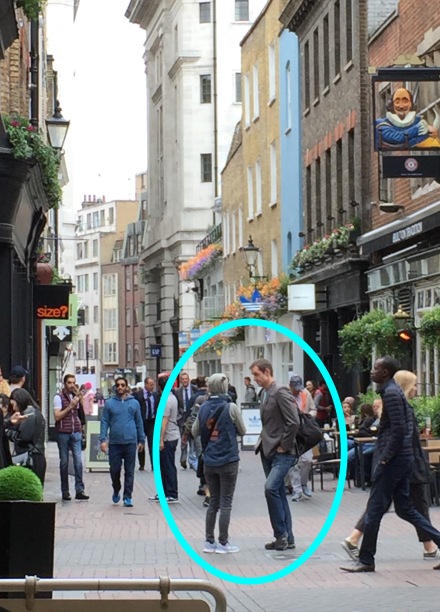 She finally got that man in the picture above to stop.  He had a look of exasperation on his face, but took a deep breath and then stood there where he was talked at for a good 20 minutes!  The lady was waving her arms about and using her playfully realistic ears as props to enhance whatever she was saying.

He nodded a few times, but that was the only bit he could contribute.  She didn’t look like she was asking for money; she didn’t have a clipboard, so wasn’t doing a survey and she had no pamphlets to hand out.  She just wanted to have a chat.

I wanted to stay longer and see how long he held out, but I needed to be about my day like the other 100 people who passed this animal lady by.  As I walked further down the street I noticed another lady, sans ears who was asking people for a minute of their time as well.

You would have to be pretty passionate about your cause to be trying to stop Londoners on their lunch break!

I’m not sure that this quite is appropriate for this story…. or is it?