The arctic fox is the only species of land mammal native to Iceland. Polar bears have also made their way to Iceland over the centuries. (note from me: but famers shoot them on sight if they make it to the mainland) Other mammals found in the wild have been brought by humans, either deliberately (reindeer, mink) or inadvertently (mice and rats). Farm animals and pets may be released or escape into the wild but are not classified as wild animals.  http://en.ni.is/zoology/mammals/

They call the Arctic Fox elusive because as the word describes – they like to keep well hidden from people…… until today!  That’s right – we spotted an Arctic Fox today running across a field.  We had a discussion about what it could possibly be and when Me Jenny reeled off all the animals found in Iceland – whales, seals, long-tailed mice, mink, reindeer, sheep, cows, horses and the occasional polar bear (if it makes it past the farmers)….. the arctic fox was the only possible answer.  How exciting!  It was kind of a shame that we were doing 90kph at the time with nowhere to pull over – but nevertheless, we saw it! 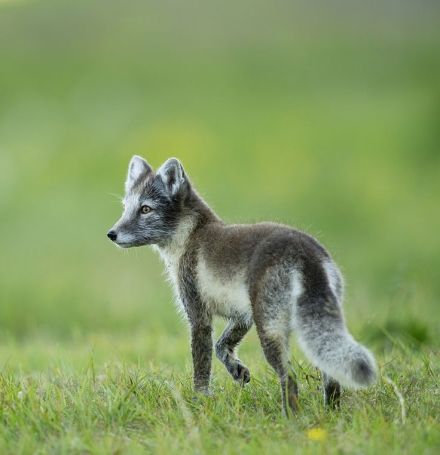 They are white in the winter and their coat turns brown in the summer months – this probably gives them a much better camouflage.

The baby ones have a bit of the Tasmanian Devils about them.

Check out the blog of the person who took this photo below: http://www.dgwildlife.com/blog/2014/8/arctic-foxes

I think that’s one for us thanks Iceland!

2 thoughts on “The Elusive Arctic Fox”