This morning we were off on a little tour which because of the time of year was going to be a non intentional private tour…. but we were joined by two lovely people from Australia!

Jenny likes to be super early for everything so, we took a walk down to the river before the tour started.  There is another bridge to the left and in Winter the section between the two bridges doesn’t freeze because the water is moving too fast – I’m not sure what happens when it moves quickly into the frozen part though….. ?

Just near our hotel is the Pohjanhovi Resort…..  Does anybody else see a play on Jon Bonjovi in this name?

Our tour guide today was Michael, a lovely young man from Russia who is studying tourism in Rovaniemi and speaks perfect English, Russian and enough Finnish to get by.  He took us to a reindeer farm, the husky park and Santa’s Village….. that’s right – we met Santa!

There are 220,000 reindeer in Finnish Lapland, the reindeer herding region and they know this because each reindeer is owned by somebody and each year they count them and any numbers over 220,000 are culled for meat.  If they have more than the magic 220 there is not enough food in the forest for them and they perish and if they have less, then there isn’t enough meat…. highly regulated.  Apparently it’s a very rude question to ask a Laplandish reindeer farmer how many reindeer they have because it would be like asking somebody how much money they have in the bank.

We got down to the reindeer and Marie, whose family has been herding reindeer in this same spot for about 7 generations (that she knows of) told us not to touch their antlers because they were very raw and tender after rubbing the outer skin off them on the fences (something they do each year)….. so Jenny maintained this stance.  Our last encounter with reindeer in Alaska clearly left Jen a little scarred when she was feeding them carrots, one ate her rain poncho – she was taking no chances this time.

We didn’t realise, but reindeer lose their antlers every year and they grow another set in 12 months – growing about 2cms each day!

We were thinking that this poor bugger above had drawn the short straw on antler shape because it was completely over his eye, but they grow like that to protect their eyes when they’re fighting.  Another amazing fact – each year when they grow new antlers, they always grow in the same shape…. so it’s not like having a bad hair cut and waiting for it to grow out.

They feed them lichen in the summer and salmon in the winter and they forage in the forest for berries and whatnot.  There was one fussy little reindeer there who didn’t like the lichen – Marie said that he preferred the salmon…. fair enough.

This poor bugger had an itch that he just couldn’t quite scratch. 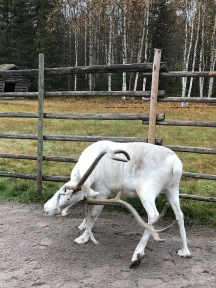 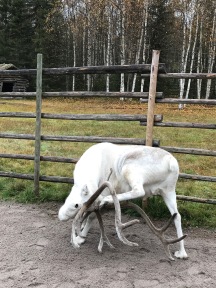 They were used to people, but didn’t really like being touched, because they know that when you rub their back, they’re about to have a harness strapped on and they were still on their summer holidays, thank you very much, but we did get a little palm stroke in as this chap passed by and their coat is very soft and thick – obviously necessary in these temps. 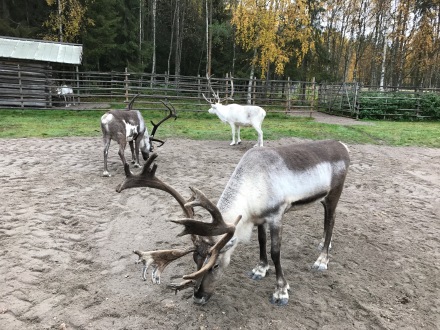 They were lovely and placid – almost making you want to become a reindeer herder…..

On Marie’s property, there are lots of little wooden houses/buildings that are used to store food and tools.

After all the patting, we were taken up to the main building for some delicious, home made forest berry tea which was made from freshly picked forest berries, as the name would predict – but she wouldn’t tell us the ingredients.  Having visitors here is obviously another way to earn income… there was a roaring fire and she chatted and answered all our questions.  Here are her toilet doors…..

Next stop was the husky park.  I don’t like the idea of animals being locked up at all, so this was a little sad, especially when they all started making a noise, that to me sounded like a cry, but guide said that they knew that the handlers were preparing to assemble the running team to pull the summer, wheeled sled, and they all wanted to be picked.  They were crying “pick me! pick me!”  There were some dogs who had run the day before who weren’t that fussed about all the commotion, so they just sat in or on their houses.  They were all very friendly and loved a pat and a sniff. 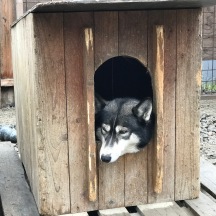 We didn’t partake, but some visitors went on a 500 metre ride around the park – the dogs can run 60kms in a day, so this was nothing to them.

There were two people who were clearly trying to visit the park undetected……  the one in the back actually worked there, so that’s sort of fair enough.

Our new Aussie friends, Stacey and Chuck were kind enough to take our photo….. we maybe needed a bit more direction …? 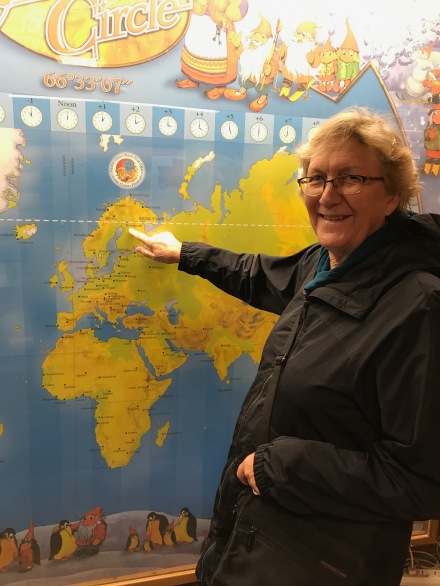 Rovaniemi is situated right on the Arctic Circle – 66.5039° N, 25.7294° E and there is a line right through Santa’s Village marking where it is, however….. The position of the Arctic Circle is not fixed; as of 26 September 2017, it runs 66°33′46.9″ north of the Equator.[1] Its latitude depends on the Earth’s axial tilt, which fluctuates within a margin of 2° over a 40,000-year period, due to tidal forces resulting from the orbit of the Moon.[2] Consequently, the Arctic Circle is currently drifting northwards at a speed of about 15 metres (49 feet) per year.  Thank you Wikipedia!

And here we are with the big man himself.  He was really sweet.  An elf meets you at the door and asks where you are from and then repeats it loudly so Santa can hear…. then when you sit down he says, “You’re from Australia!” (like you don’t know) and then narrows it down….. “What part of Australia?”  “The west”, “Yes, which place?” “Perth”  “Ah, yes, I know Perth.  It’s a lovely place.” “Have you been there?” “Yes, every year”

We asked if he could possibly work some magic and clear away the clouds so we could see the elusive northern lights and he said that if it was a Christmas wish then we’d have to wait until the 24th December….. a little selfish – or is that “elfish”?  See what I did there?  Anyway, we were definitely swept back to our childhoods being in the presence of himself.  They also take a video of your interaction with Santa and show it to you afterwards…. we looked like giggly girls totally in awe.

After seeing Santa you walk through a corridor lined with photos of Santa in leisure pursuits – obviously taken in the off season….. and then the corridor leads to the obligatory souvenir shop. 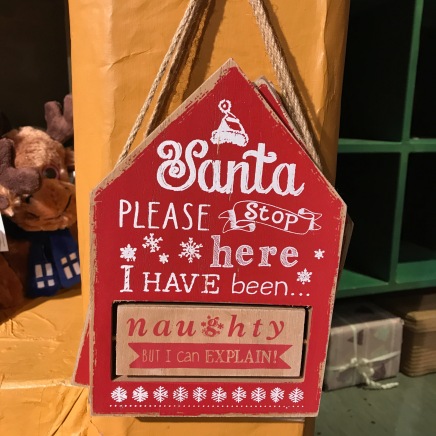 You can sit in this cosy area to write your letters and postcards from Santa’s official post office and check out the sorting station and then mail your letters right there and then.

last year Santa received about 500,000 letters and he and the elves try hard to reply to each and every one of them. 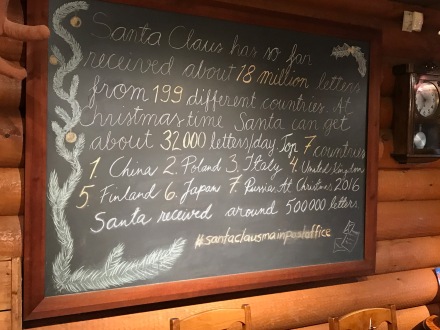 There were a number of reviews on Trip Advisor saying that Santa’s Village was commercial and tacky and in the summer, without the snow, lacked any magic…. I disagree with the magic bit.  Yes, it is commercialised – there is a whole row of souvenir shops, and besides the post office and Santa’s main office – not much else, and being out of season, there were only a handful of people there, but I see the as a plus – there were no lines to see Santa.  So, there was definitely magic…. and yes, I purchased a souvenir to remind me of this moment.

Having said that – it be awesome with snow.

Santa was ‘ere and so was I! 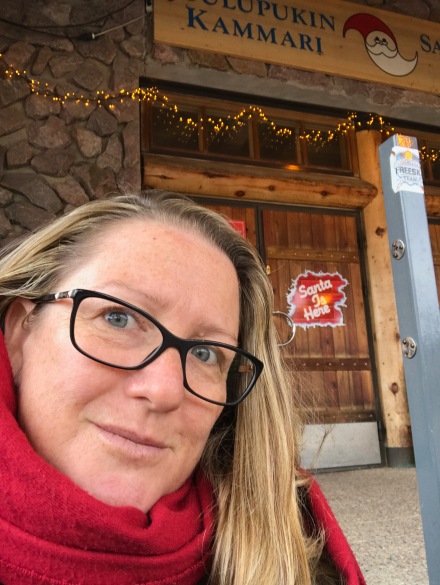 This is inside the lift at our hotel….. is somebody following us, do you think?

One thought on “Santa Claus is coming to town”