This morning we woke up to 6°C.  Now I like the cold, but this was a bit much – especially since I had packed clothes for 20°C+, so dressed in nearly everything I brought with me, we met Pete, Kay, Noah and Wes out the front of our building at 8am on the dot.  Today’s adventure was going to take us down town to Battery Park and maybe on the ferry to Staten Island.

First stop was brekkie which is tricky when you don’t know what’s where or what’s what.  But we eventually found a place with an assortment of choices and plenty of seating.  On the way to finding this place we stopped outside of the NBC news window – you know where those people stand outside not knowing that they’re on the telly…. well that was us!

We passed Bryant Park, which looked a little eery in this weather, but is somewhere that we’ll definitely be coming back to.

We got to 34th Street and jumped on the downtown subway.  When the train arrived, it was absolutely packed, I thought that we’d just wait for the next one but Kay manoeuvred the boys on into the little tiny spaces until they could breathe without a mouthful of somebody’s bag or buttock – it’s tricky being that height on the subway!

But a couple of stops later, we looked around and they’d found seats!  Score.

And they were happy as Larry!  Considering they had to pay the same price as an adult – why shouldn’t they get a seat?

We were headed to South Wharf to catch the ferry, but as the train pulled into the World Trade Centre stop Pete suggested we get off there and have a look, then walk the rest of the way down.

This is the Cortlandt Street stop – it’s a new station that apparently, according to the tour guide I overheard, cost $4 billion – with a “b”.  The architect is quite well known for blowing this budget – which seems to negate the need for a budget.  It’s a pretty amazing space and very modern, so for my liking, it’s good, but not as good as Central Station – they don’t make buildings like that anymore.

The Oculus (the top part of the building) is meant to resemble a bird being released from a child’s hand.  I can see that if the child was maybe holding onto the right wing a bit tighter than the left.

Right outside is the Freedom Tower – which is the building that they’ve popped up to replace the two World Trade Centre buildings.  The antennae at the top is the same height as the WTC buildings were.

The Brown Family having a look at the memorial.

It’s still quite a sombre place to be – even 17 years later.  It’s hard not to imagine what it would have been like and what the people there would have gone through.

So clearly there’s no pressure on the gardener to keep this one alive!

Next stop was Wall Street.  The boys wanted to see the big bull and I had never been down that way before, so it was something new.

On the way down there we passed this church – which has security in the doorway – like airport body scanners.  Seriously – what has the world come to? 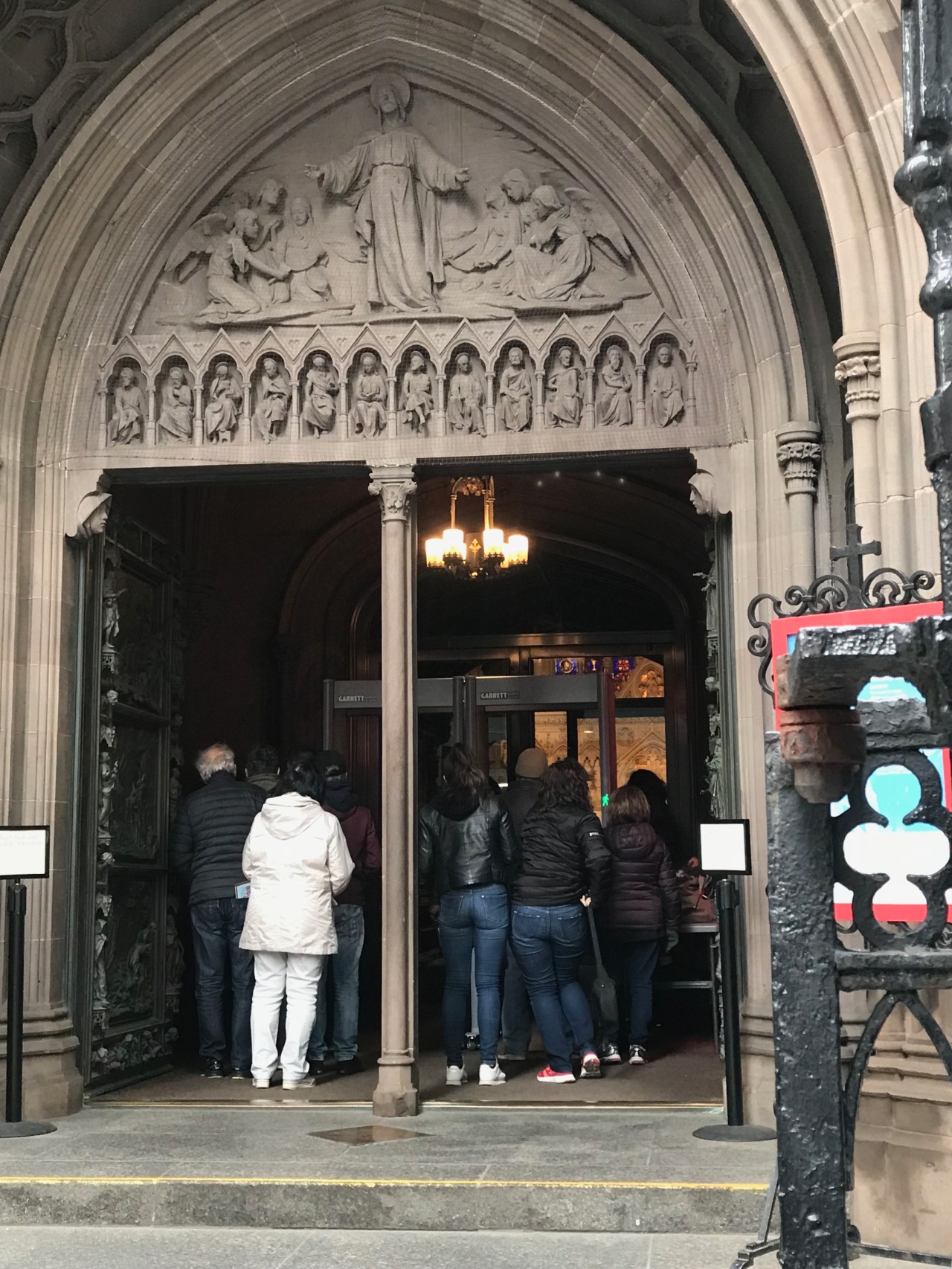 There is so much scaffolding around New York at the moment – way more than the last time I was here.  It’s on nearly every street you walk down and Wall Street is no different – they’re constantly building and rebuilding smack in the middle of city which disrupts everything.

These chaps were cheering themselves up about all the scaffolding by playing a few ditties outside Federal Hall. 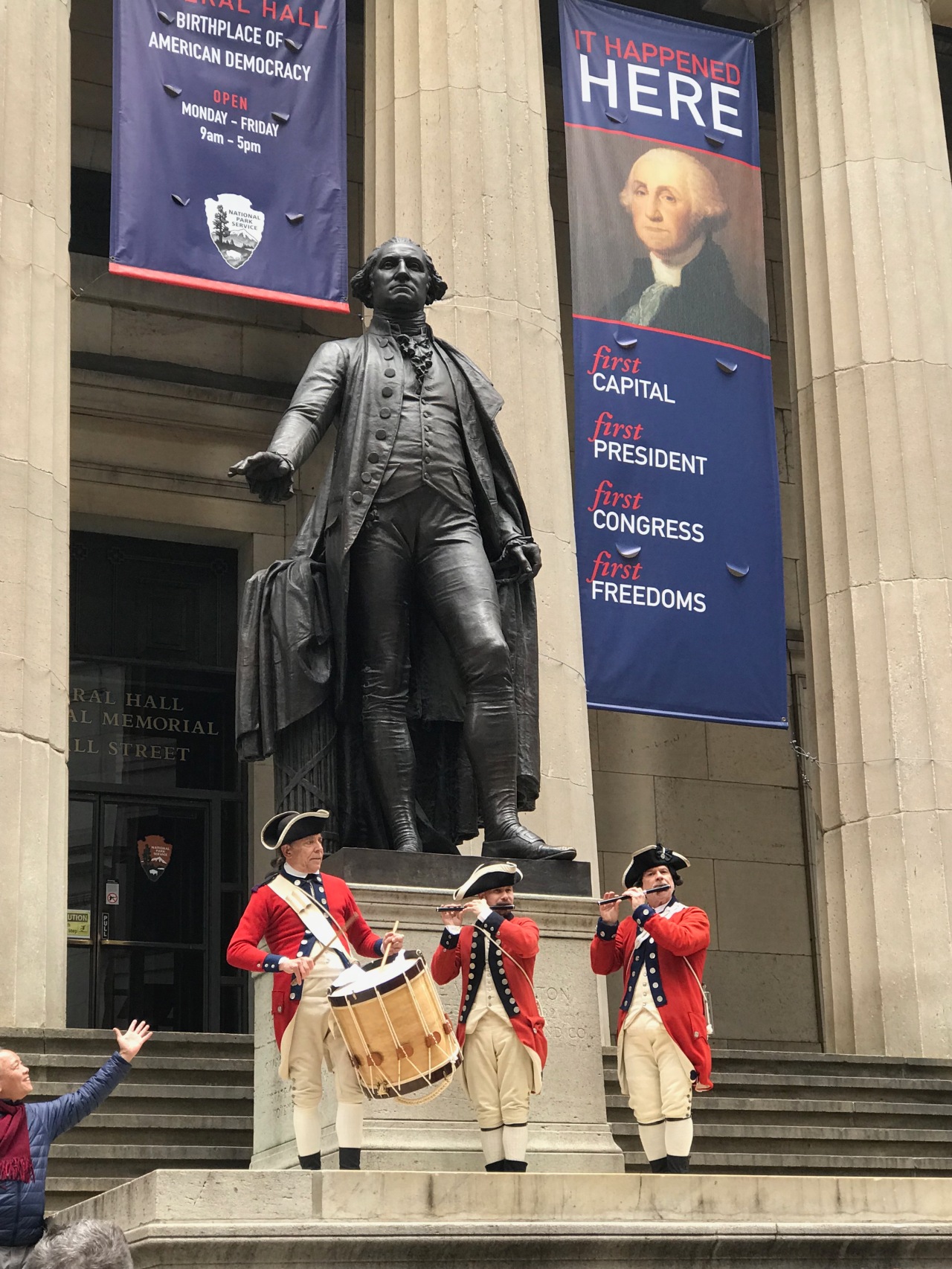 The bull isn’t actually on Wall Street, but around the corner a down two blocks.  It was surrounded by people – so much that you couldn’t get a clear shot.  At first we thought that there was maybe a line up to take your photo with the bull, but it became clear that it was an absolute free for all when Peter handed me his phone and said, “I’m going in!”  I got the shot (which is on his phone, so I can’t show you)

The boys had a bit more luck getting photos though…

This statue – Fearless Girl is only relatively new – she was put there in March 2017 and there has been a far bit of controversy surrounding her existence and positioning ever since.  Here’s the Wiki link if you’re interested in reading about it:

The boys ducked under for the obligatory photo with the bull doogs,  then we were on our way.

Heading back uptown we jumped back on the subway… this is notbody we know (I don’t think… how would we know?)

… and headed to a shop called B&H which is a super duper electronic store that sells literally everything.  They have a massive warehouse underneath the shop that was as big as the whole block and the shop has conveyor belts running just under the ceiling the length and breadth of the store.

So you line up, then you’re buzzed to a desk along a long counter – like the old days in a bank and ask your question to the clerk – then he checks it out on the computer and gives you a bit of paper – then you head to payment where the person takes your cash and gives you a receipt…

… then you head to pickup where you give the person the receipt and they give you the goods – already bagged up, stapled together with your receipt and then you head for the door.  It’s crazy.  Pete needed something special for their motorhome trip, so we browsed around while he followed all the rules.  If you need anything – this is clearly where you come to.

As it was still frickin’ freezing, it was decided that we would head up to the Natural History Museum.  ML decided to bail out and head back to our penthouse (well it is on the top floor!) for a little letdown and warm up.

The rest of us made the most of the warm inside and looked at everything on all 4 levels. 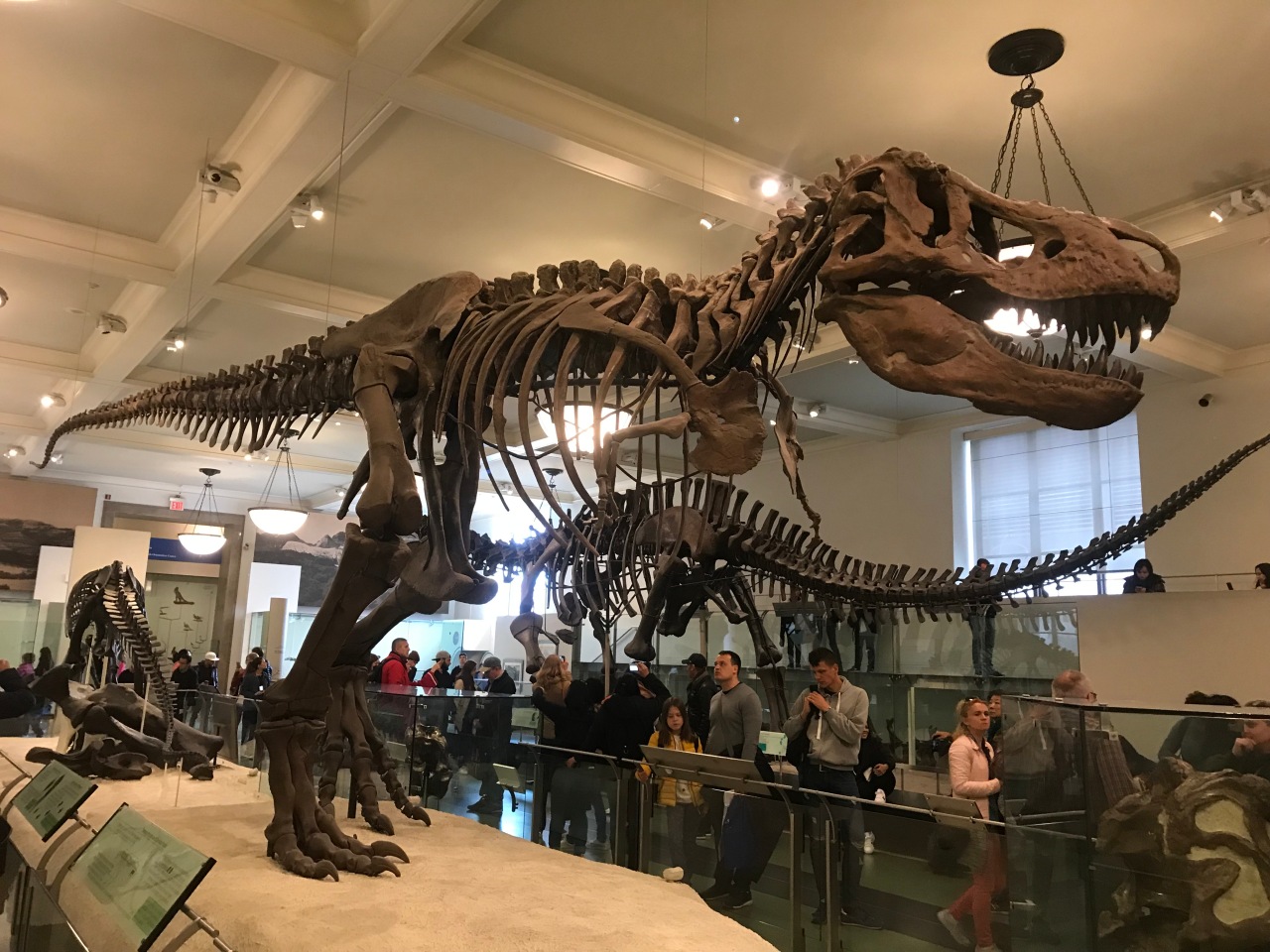 Noah and Wes were really interested in all the exhibits – they really are fabulous kids.  In fact, the other day ML wrote on her blog just how fantastic the two boys are and they were chuffed.  Then, I was asked if I would also like to write something about them (by them)… so here it is:

Noah and Wes are incredibly cool to hang out with.  They are so well behaved and absolutely hilarious.  On the odd occasion when we were deciding on what we might do or where we might go Wes would ask me, “So, what are your thoughts?” They are interested in what people are saying and really interesting to talk with.  They both have fantastic imaginations and great aspirations for their futures.  Noah has decided that he would like to be a bull fighter and Wes thinks he might be a scientist, an archeologist and a wrestler.  It was great fun to spend the last couple of days with them all and maybe next time I’ll just go the motorhome with them – because I think I’m going to miss them.  Don’t every change you two gorgeous boys.

Pete & Kay – you should really be very proud. 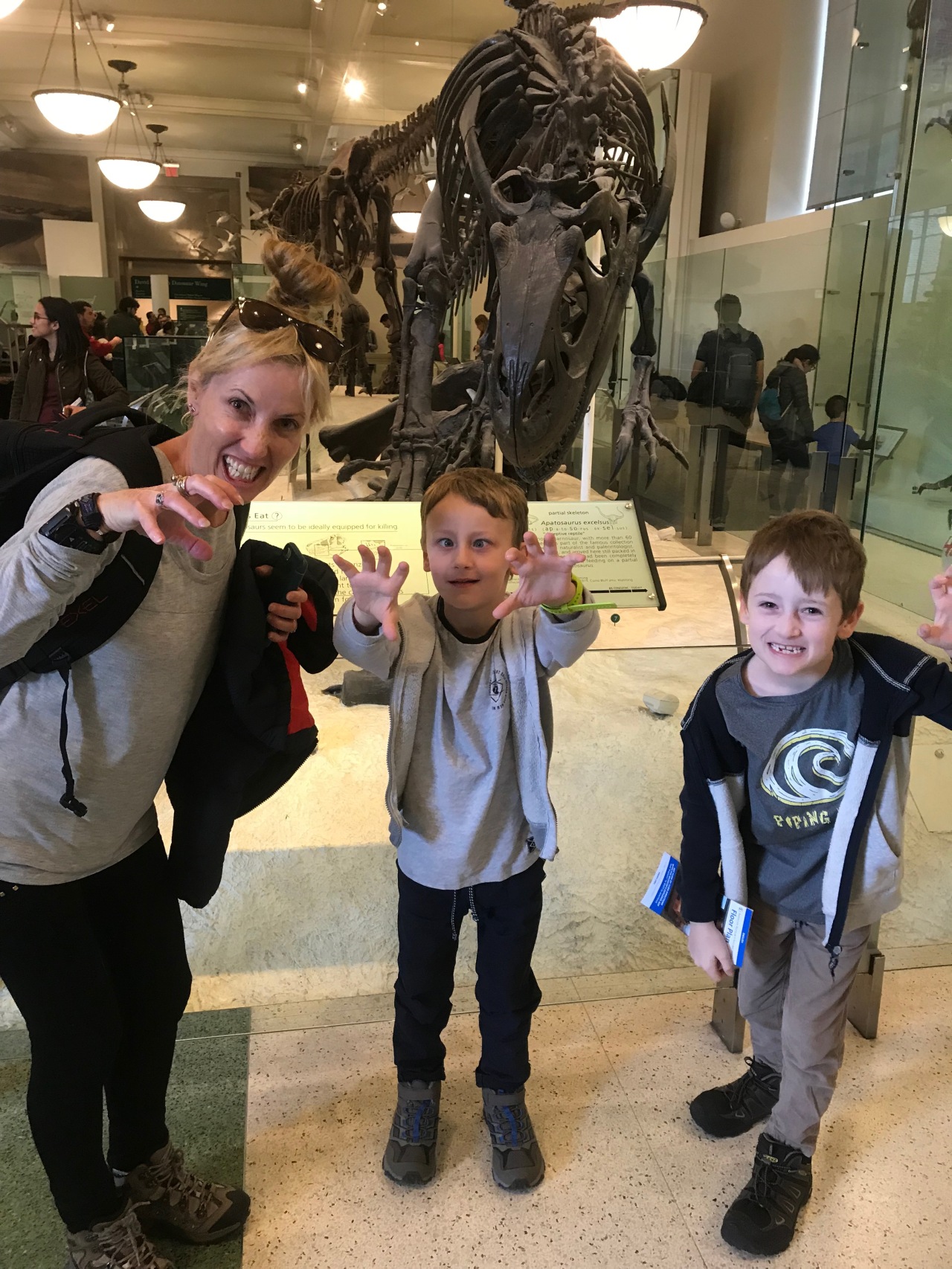 My highlight at the museum – the bears… 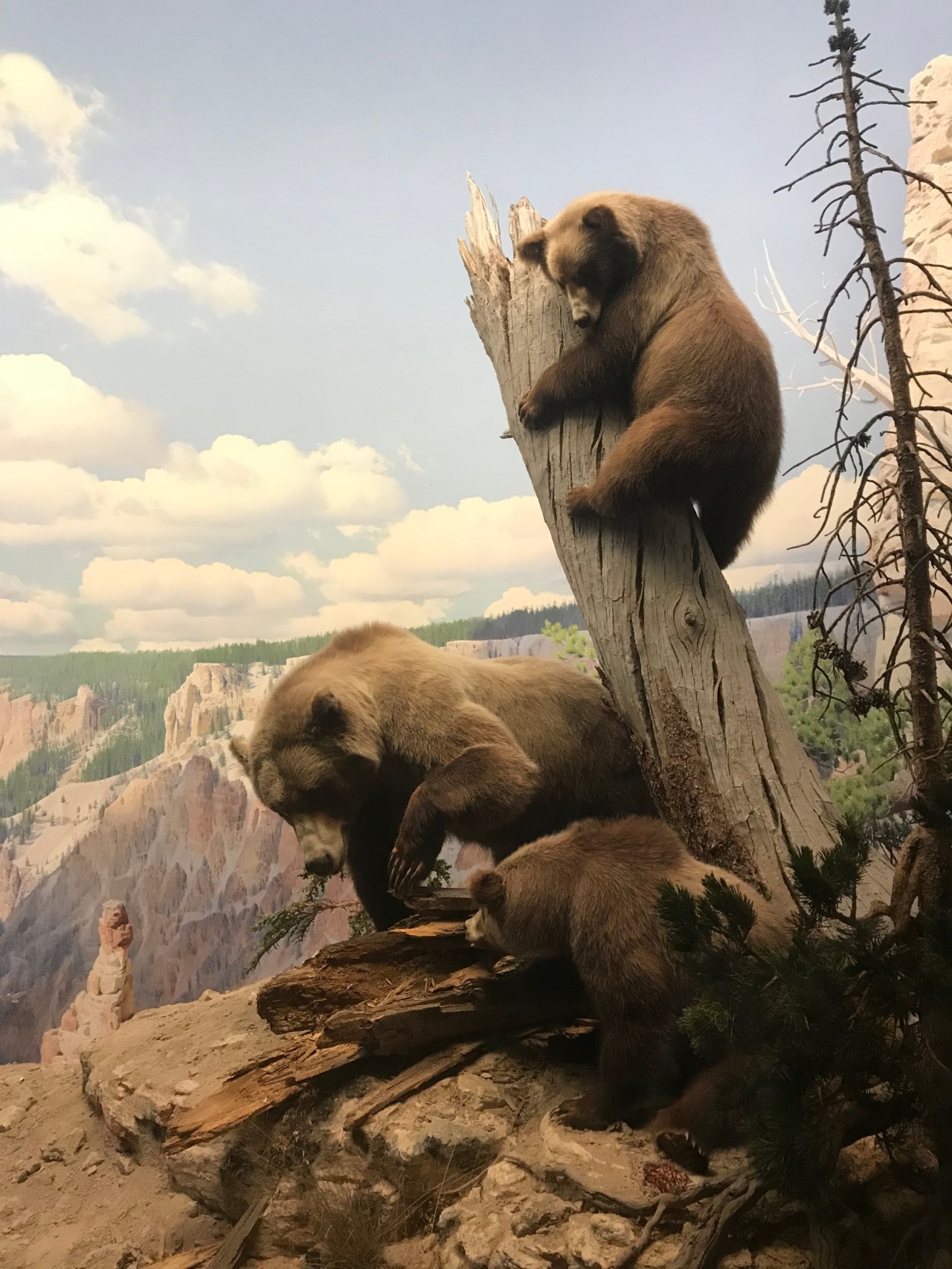 They boys likened our visit to a school excursion, so at the end we asked what they had learned.  Wes learned that whales can fly and Noah learned how to catch a shark, so that was money well spent!

A great day was had by all – especially ML who, if she hadn’t fallen asleep on the train before our stop, was tucked up in a warm bed.

It was still freezing when we came out, and it had started raining (a bit) so we decided to walk back to their hotel/our apartment. 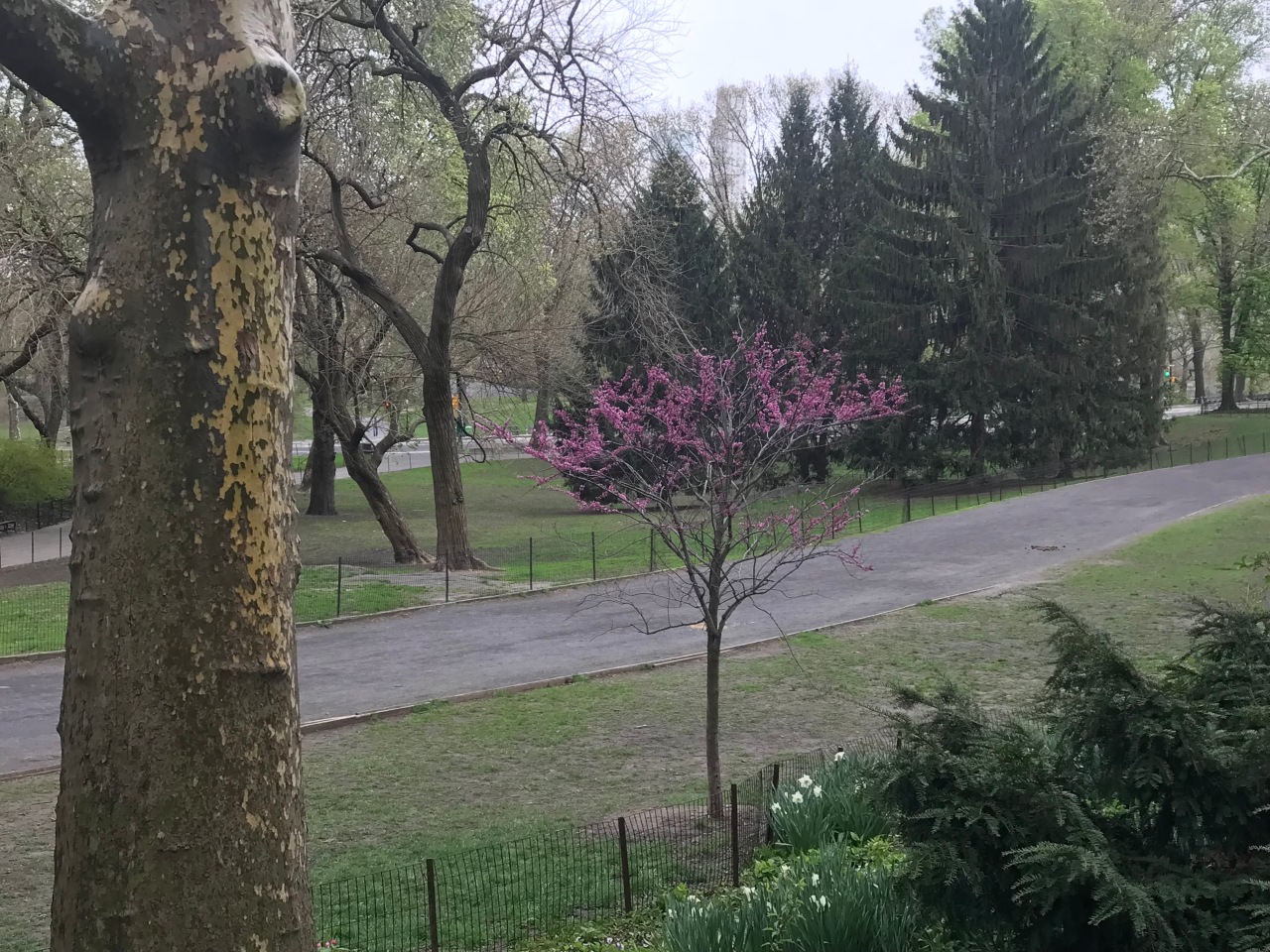 We strolled past Central Park and these amazing buildings.  I do so love the old ones.

I really want to try one of these city bikes, but Kay was telling me that you can only ride them for 30 minutes as they’re meant to get you from point A to point B – so I think I’d spend the whole time worrying about finding the next docking station to actually enjoy it.  Or maybe I could just ride around the park for 25 minutes and bring it back to the station…. but then if there’s no spaces left, you have to find another one… too hard – I think I’ll just walk.

I got home to our apartment to find the door open, keys on the bench and ML facedown on the bed – so I deduced that she had indeed unlocked the door, swung it closed behind her (which didn’t latch), plonked the keys down on her way to the bedroom and that was that.

So we’ve had a safety talk about door closing/locking and I think we’ll be fine from now on.

Pete, Kay & the boys have to get up at before the crack tomorrow to pick up their motorhome about an hour out of New York, so we decided to meet early for a “Duplex Dinner” – so-called because when ML and I were growing up, we lived 5 houses away from each other on the same street and ML’s Mum – Shirley would always have dinner ready super early.  Like, at 4.30pm she would tell me that it was time for me to go home because ML had to have her dinner (that’s the reason she told me anyway… it was probably more likely the she was sick of me hanging around), thus any dinner eaten before 6pm is a “Duplex Dinner”. We chose Rosie O’Grady’s because it’s right across the street from their hotel and one block up for us, so nice and easy for the kids who had done A LOT OF WALKING today – upward of 23,000 steps – absolute troopers – not a single whinge! 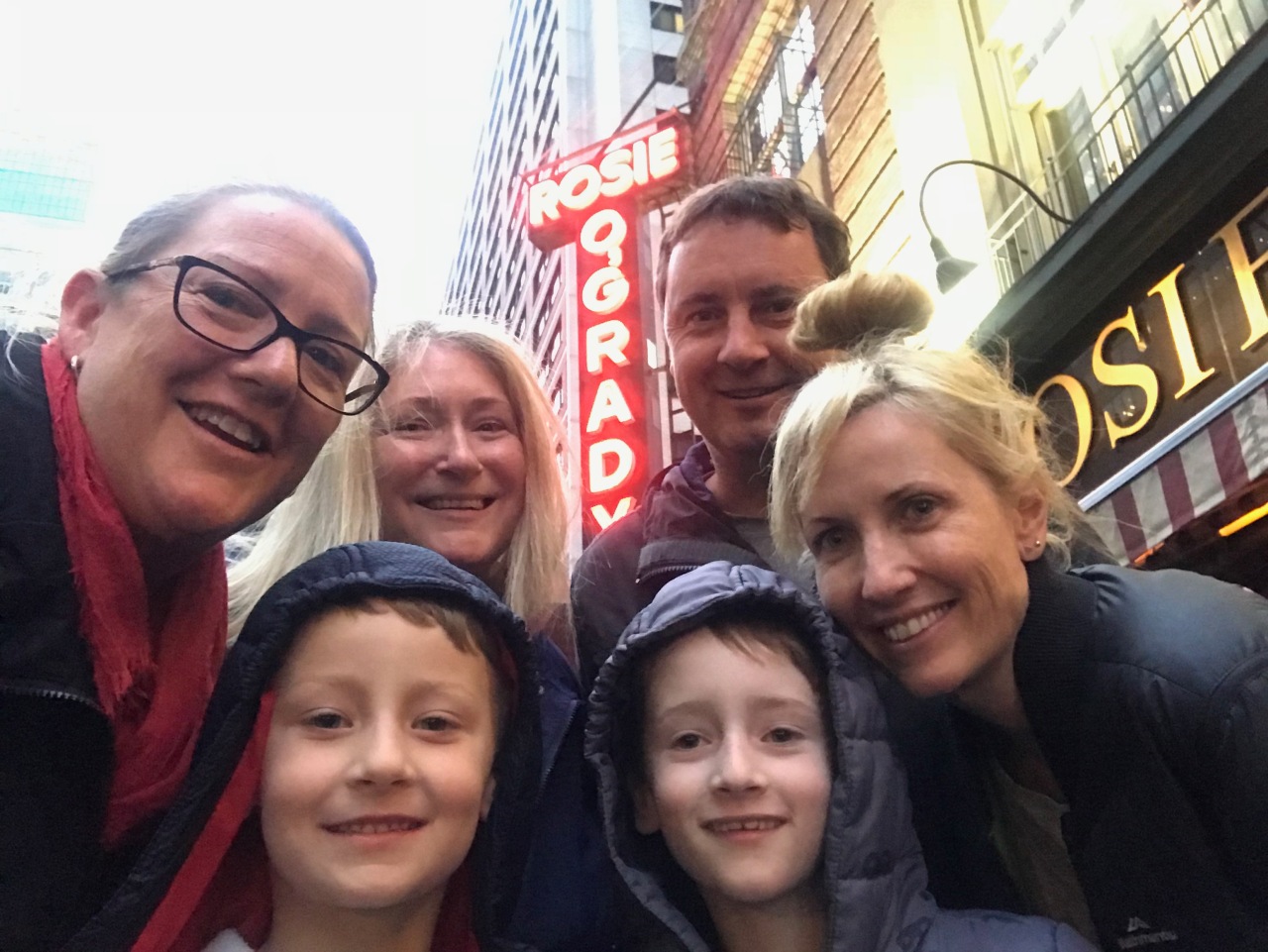 … and a silly face photo. 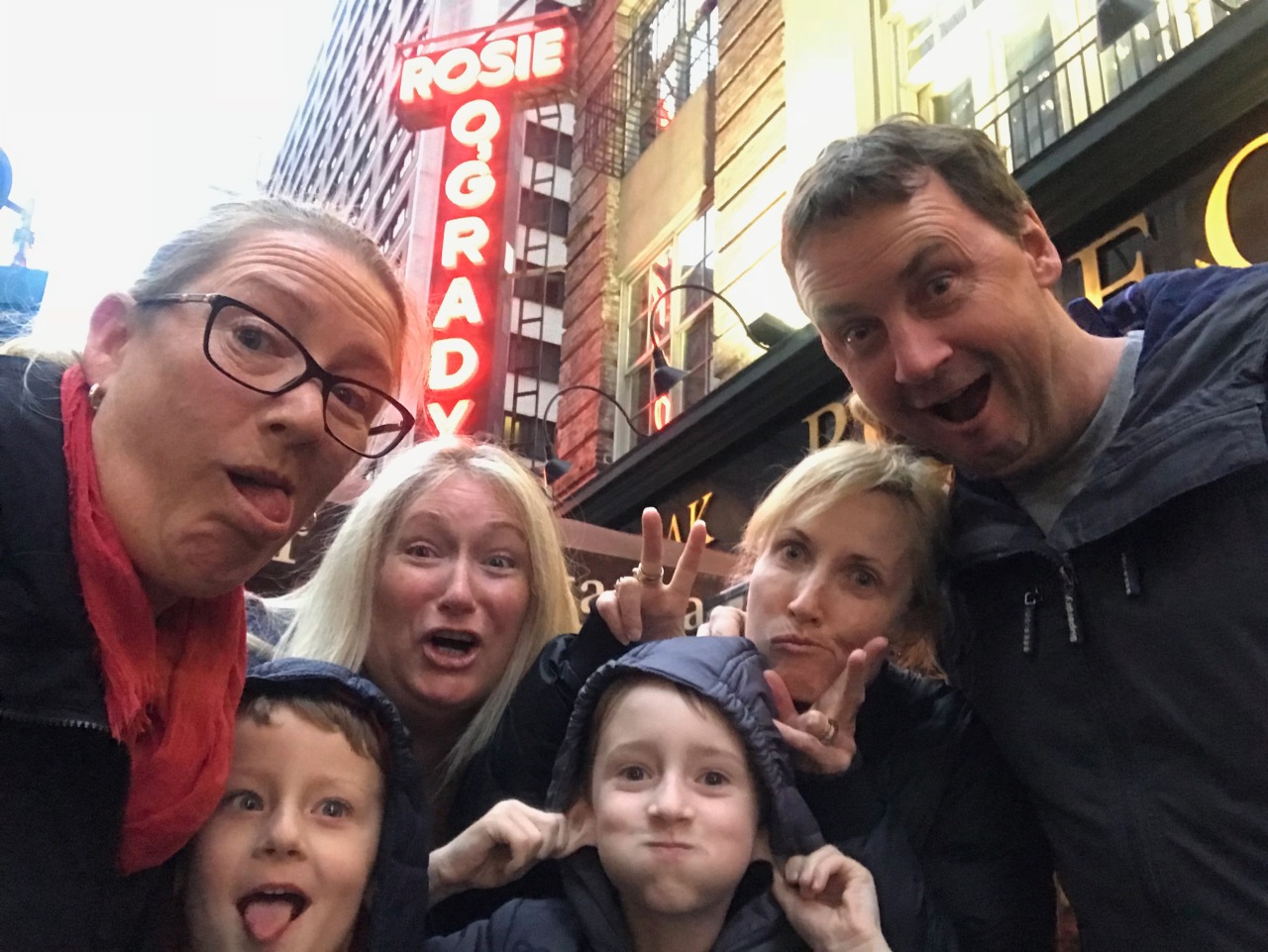 Then back to our place to admire the bit of sunset between the buildings from our roof top terrace.  That’s right people – our apartment building has a roof top terrace!  I’ll take photos next time – it was way too cold to take my hands out of my pockets.