It’s not a trip to Colorado without a tour up to the Rocky Mountain National Park, so on our first free day – that’s exactly what we did.

We booked with Aspire Tours and they were fabulous.  Our guide, Alyce was enthusiastic and very knowledgable.  A good tour guide makes all the difference to the tour – they can make or break the day and today I’m happy to say that Alyce restored my lost faith in group tours.  We only had 8 people in our group and not a single annoying person among them (maybe it was me?)

Our tour started at the Denver Union Train station and Alyce talked about some of the buildings in the city on the way out.

Some of the buildings in the city are still the originals from the 1800s with the orignal advertising painted on the side. 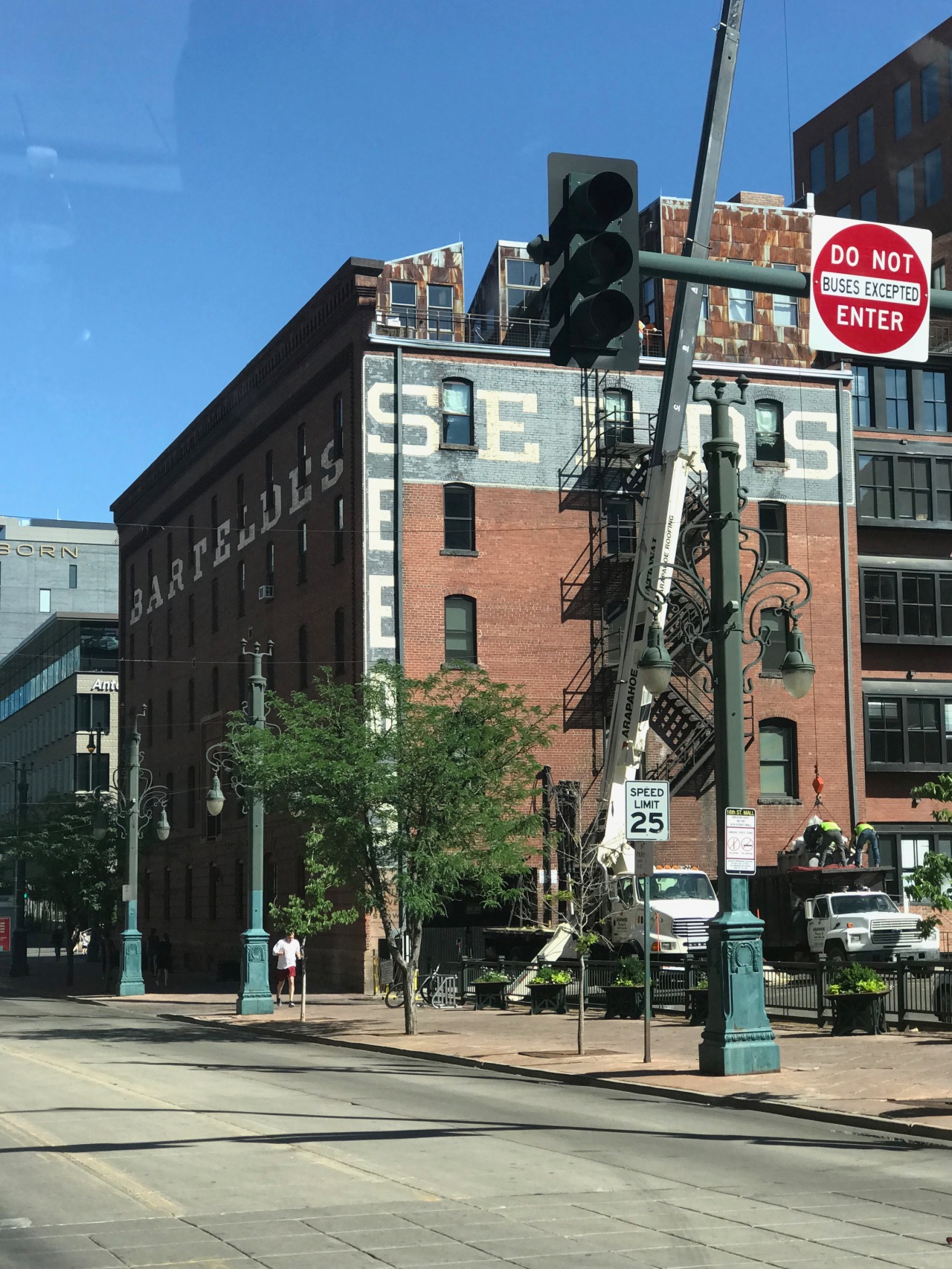 This one’s had a refit, but they’ve kept all the features.

Check out this little VW – the chap has adapted it, so he sits inside and makes coffee – genius!

We drove through the university town of Boulder which was really pretty and then we spotted our first glimpse of the foothills. 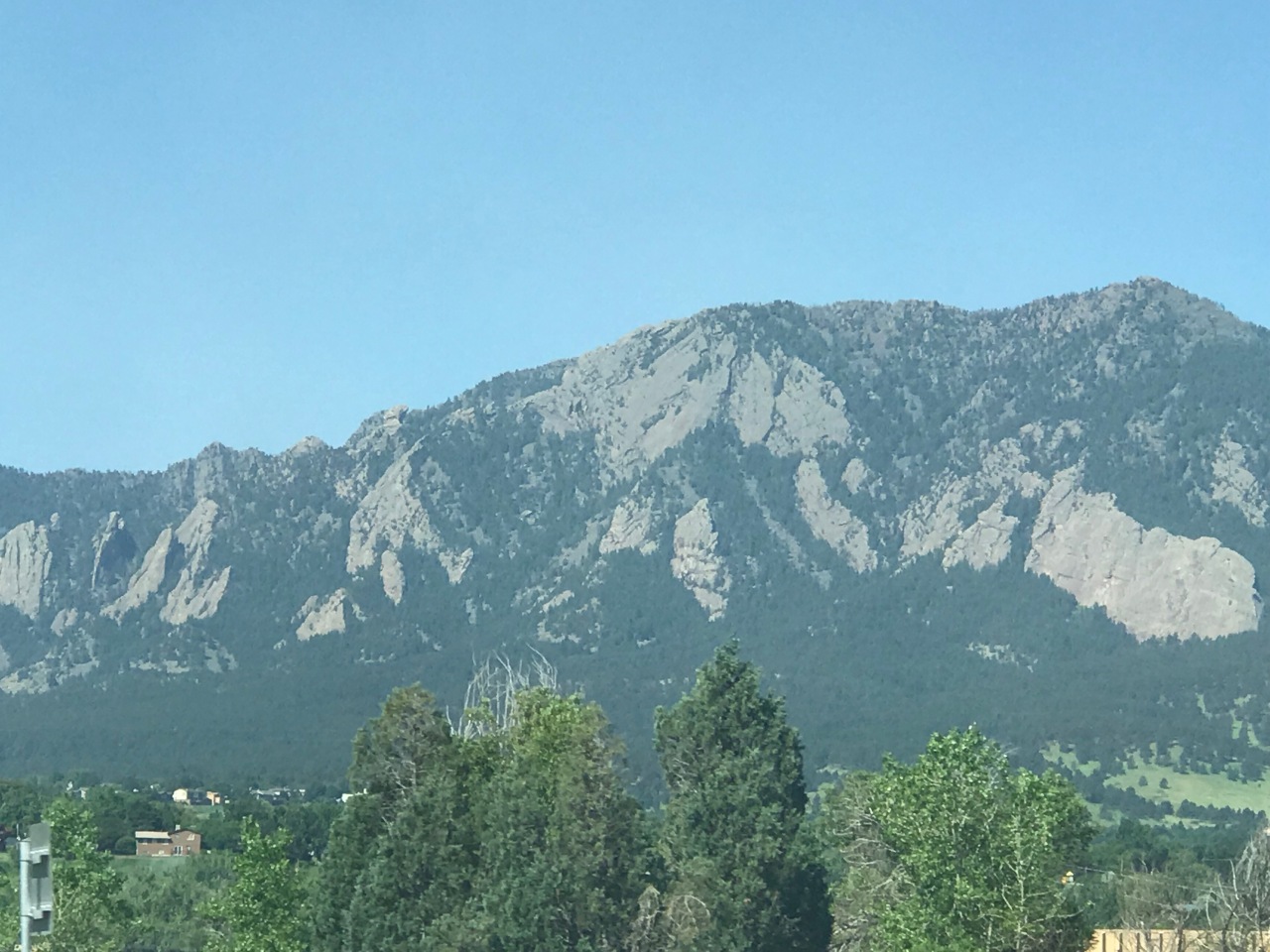 This is what a prairie dog looks like up close.  I bit like a gopher or a groundhog, but they stand up like a meerkat, but they are considered rodents and they cause a bit of trouble when the city are building a new neighbourhood because they dig underground and through the new foundations.

Our next stop where we got out of the bus was in a town called Lyons.  A cute little town where we bought some supplies and went to the toilet and Jodie purchased a lovely t-shirt from the Reruns second hand shop.

Don’t be fooled by the cuddliness of this bear….. there are real life black bears in the Rockies, although no grisly bears.  Apparently they were hunted out quite a while ago, but they’re slowly moving down from Wyoming. I’m not exactly sure how they know where the border is – maybe there’s a sign? 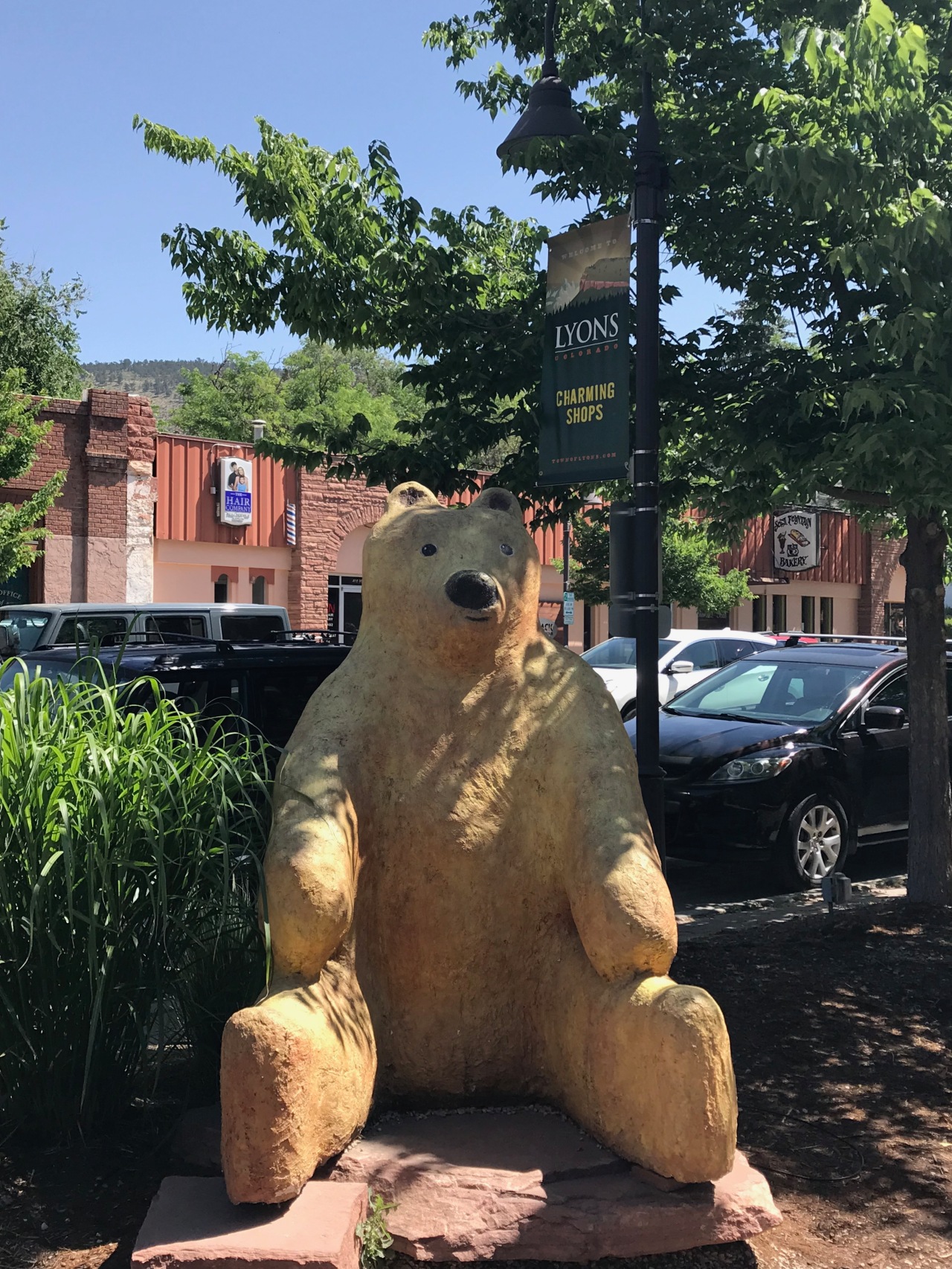 The trouble with visiting these little towns with all their gorgeous shops is that you can’t buy anything – especially when you’re at suitcase capacity already!

The entrance to the park is at 2512m above sea level…. the air is really dry in Colorado and thin, so lots of moisturizer and lip balm have been applied along with drinking lots of water.

I was hoping to see lots of wildlife on this trip… there was a possibility of moose, elk, foxes, deer and black bears, but the first thing we saw was a lone sheep.  She was a ewe, so no curly horns.

There are waterfalls all over the park and this one was lovely to do a mini hike up.

Then we stopped at another lovely place for a picnic lunch and a little walk around the area.

This area used to be a ski-field back in the day, but because it was so small, it couldn’t compete with the likes of Vale and Aspen, so it closed down. 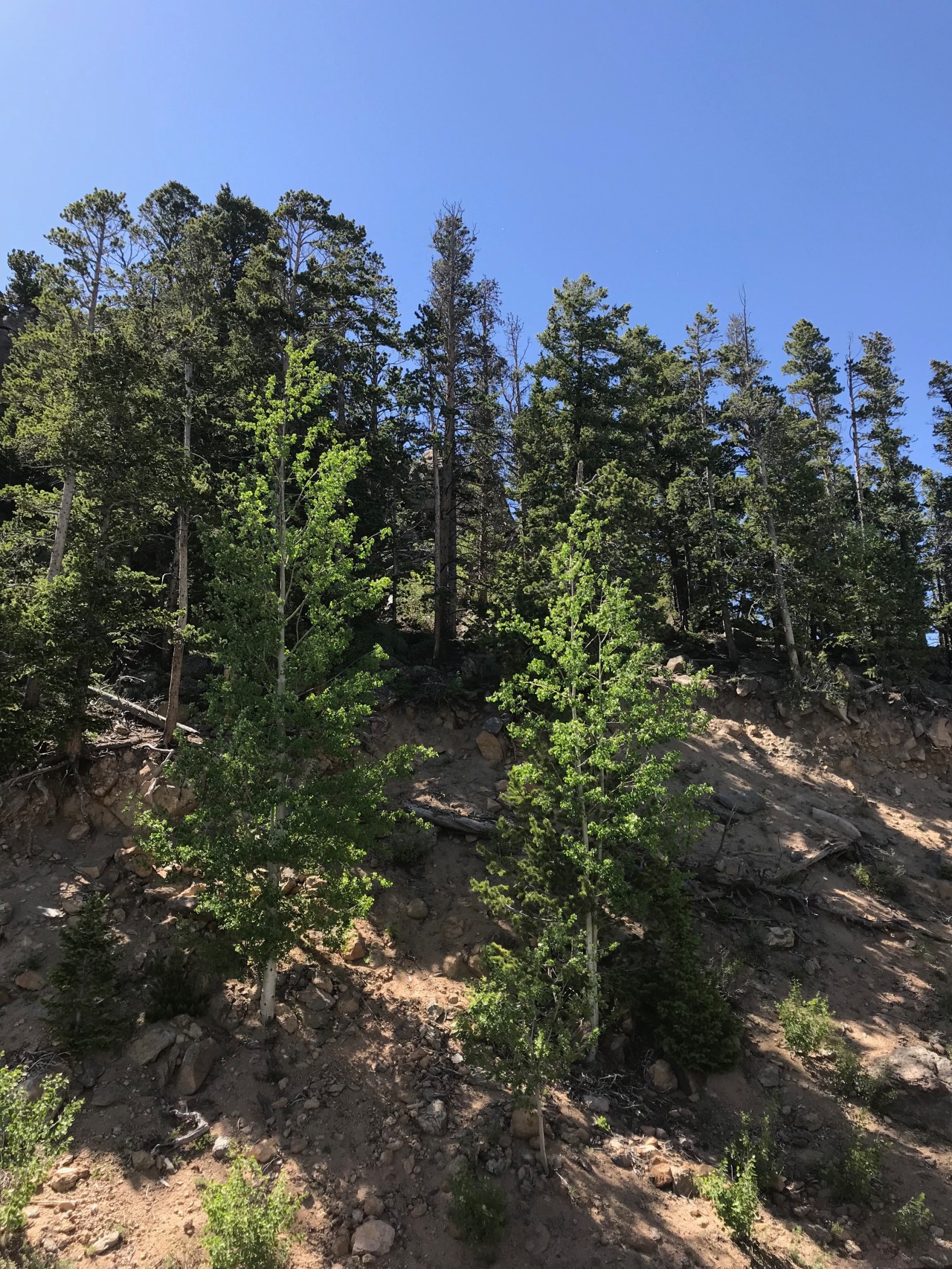 As I only saw the back end I couldn’t tell you if it was male or female and we were on a narrow road going around a bend, so there was nowhere to stop.

This obviously isn’t my photo – but I’ve included it to show you the animal that I saw.

The journey up to the tundra – we were surrounded by picturesque views up to the snow capped mountain tops.  Fun fact: the word “tundra” is Russian for ‘land of no trees’

Then we got to the top… and this was our view.  She was pretty windy up there and it had chilled right down.  It has been quite hot in Denver the last couple of days, and Alyce told us that this was the hottest day she’d ever spent up in the Rockies… but hotter up there is still very pleasant.  We had to hold onto our hats up here, the wind can get up to 160kmph!

I could look at this vista all day!

There was a little patch of snow right near the footpath and even though there were signs everywhere asking you to stay on the path, some people just couldn’t help themselves and jumped on over.

This patterned ground is only found in Arctic and Alpine regions where temperatures remain below zero for at least 5 months each year.  During the last ice age, freezing and thawing of this tundra topsoil forced these patterns to the surface.  Interesting hey?

It was more slush than snow, so it looked better from afar. 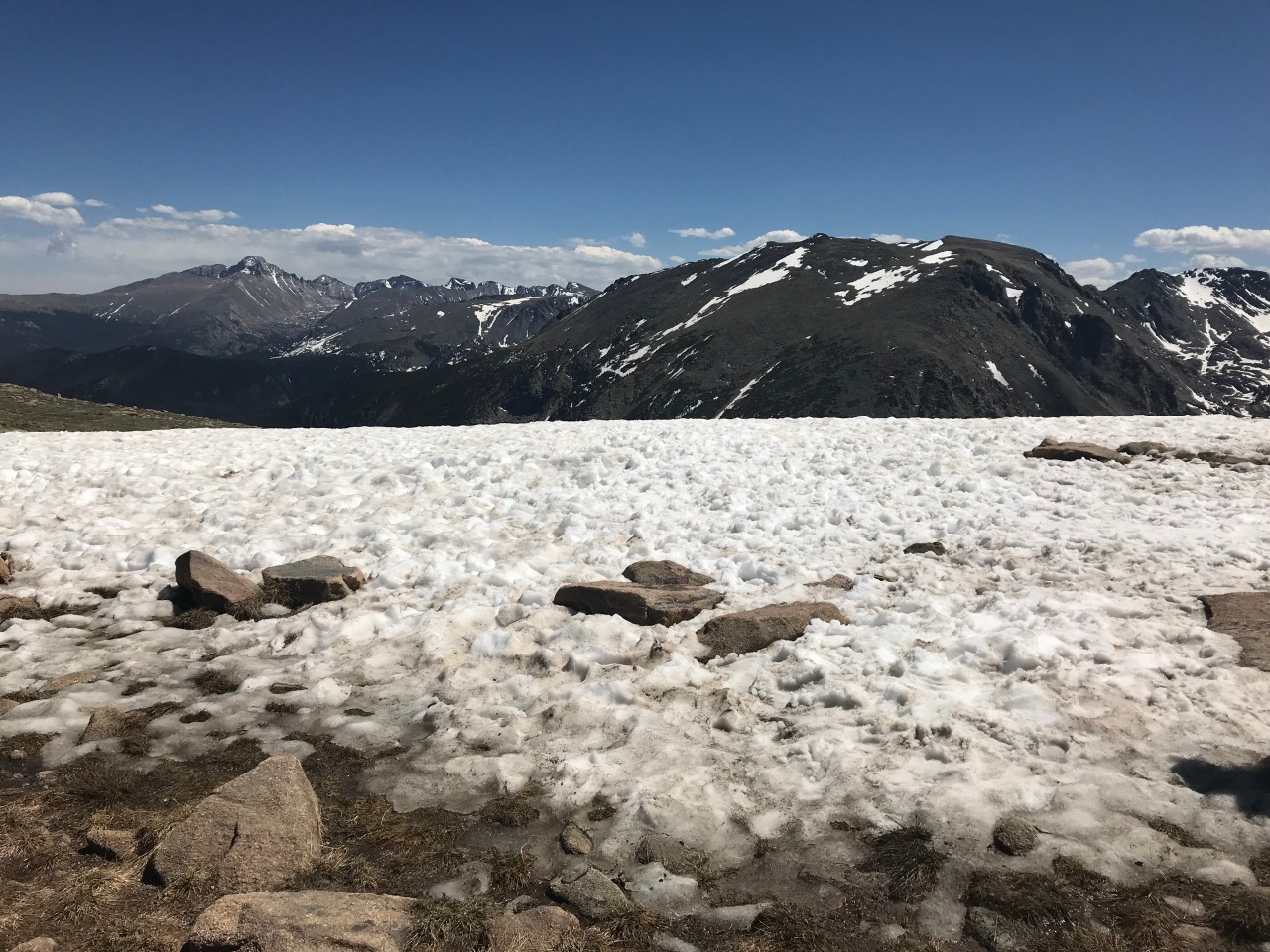 The air is so thin up here that this packet filled with air to the point of bursting. 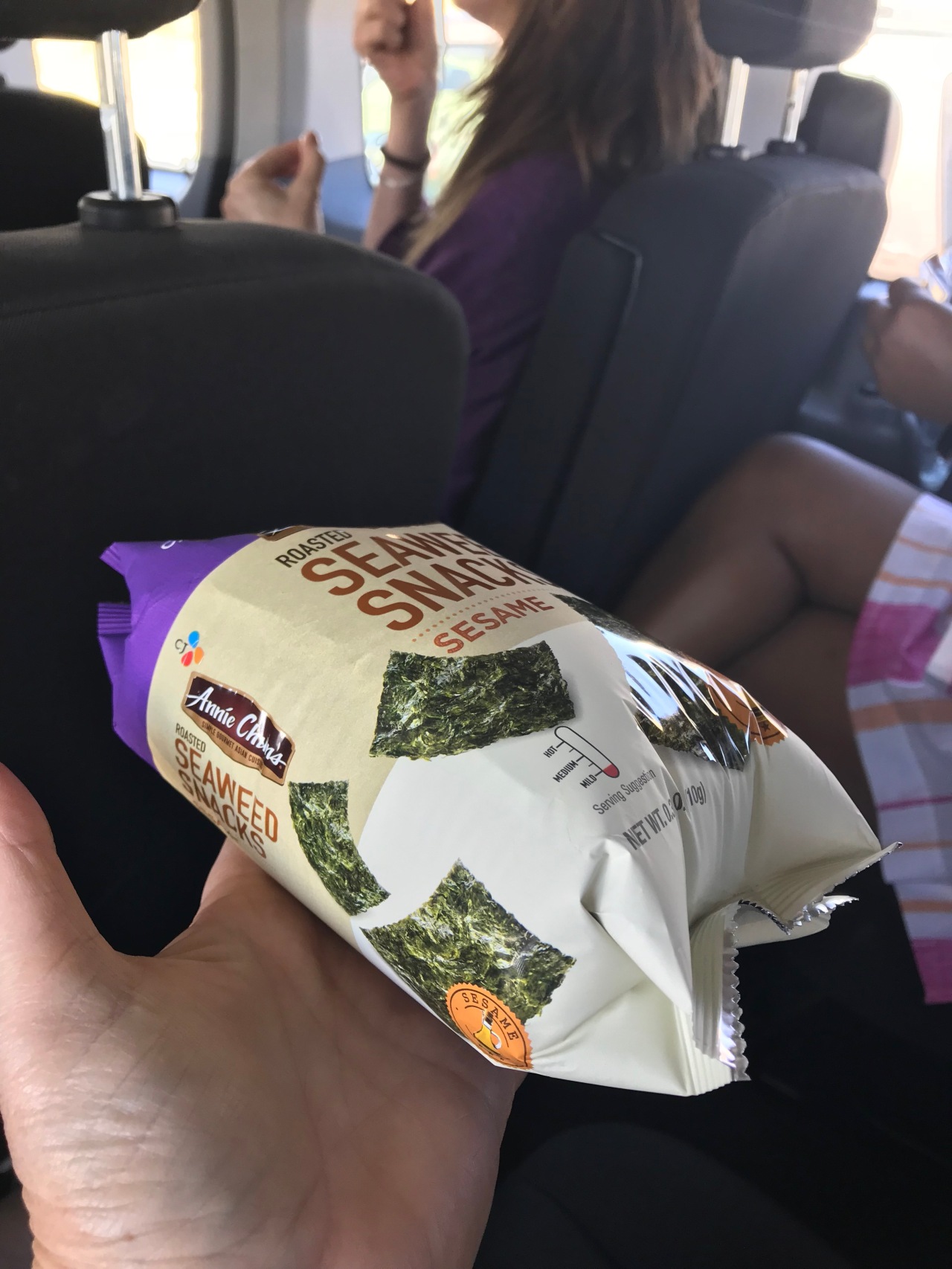 On the way back down Alyce dropped us off at one carpark and we walked along a boardwalk past some amazing scenery and she picked us up at the next car park.  Check out the cool bikers heading to the top…. a friendly lady even gave me a wave.

So part of the view along the boardwalk is this one… all these mountain peaks have names, but this one was the most apt as so many people have asked us if Jodie and I are twins…

See – identical!  Maybe if one of us took our hat off, that might make it easier for people?

The drive down seemed to go a lot quicker than the drive up and we were back in front of Union Station by about 5.45pm.

Such a great day in the Rockies!