So, we said goodbye to Denver and boarded the train to Glenwood Springs.  We were waiting for the engine to be attached to the train, and they didn’t appear to be any sort of hurry, so we had about an hour just sitting at the platform – lucky we got up so early!

Because there was no engine, there was no air-conditioning, meaning no air… so I waited out on the platform where it was a bit cooler.  I was standing there, minding my own business when a short chap approached me and said, “Are you the girls (there was only me there) with the yoga mat?” I wasn’t sure what he was talking about, but then remembered that Jodie had her mat hanging on her suitcase.  I said, “Yes, that was my sister.”  “What’s your favourite yoga pose?” he asked me. “Um… I’m only just a beginner, so I guess downward dog?” (if I’m honest, it’s the only name I could remember) Then he introduced himself as Tim and without any hint on interest on my part, proceeded to tell me all about himself.  Tim is a yoga instructor and he thought that this was the perfect time to tell me all about I needed to do to perfectly yoga practice.  I kept looking at my phone and around the platform towards to conductor and the door.  He wasn’t getting the clue that I wasn’t really interested…. he then told me all about this favourite yoga pose (honestly – I’m not making this up!!!) then, just in case I wasn’t clear as to what he was describing, he showed me his favourite yoga move – there on the platform.

Finally another person joined us and I made for the train.  I raced in to our roomette to tell Jodie what had happened – I still couldn’t quite believe it myself.  She told me to shut the curtain and not make a sound. 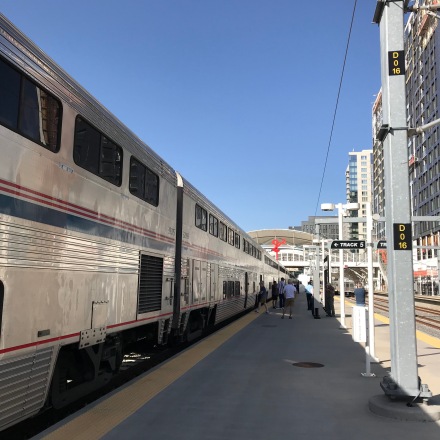 Everybody told us that the view along this route was the most scenic on the whole journey and they weren’t wrong!  These photos aren’t going to do any of it justice. 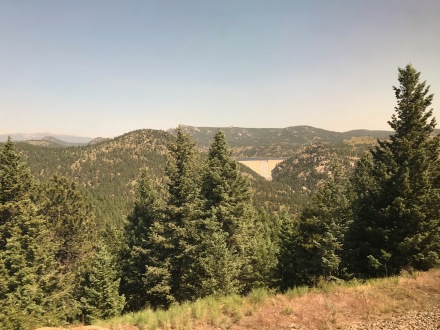 And this is the big resovoir. 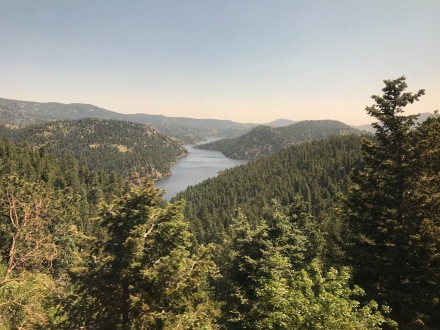 This house was built by Kathy Lee Gifford and her husband, but she didn’t like it, so they never lived in it.  Talk about isolated! 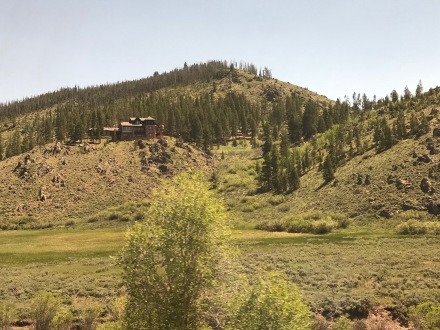 The roomettes are quite comfy, but when you have legs as long as these ones, you’ve got to get inventive! 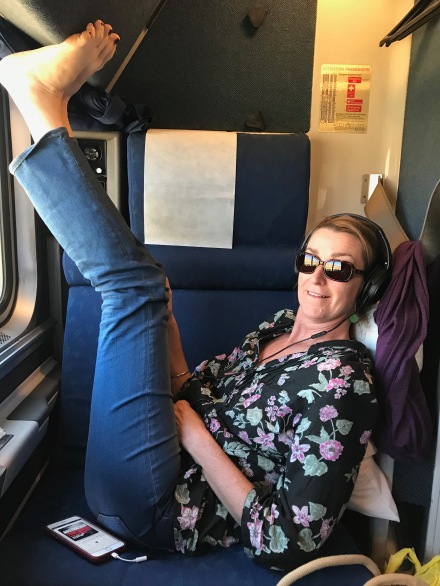 The colours have also been a bit muted by the windows – this was lovely and green. 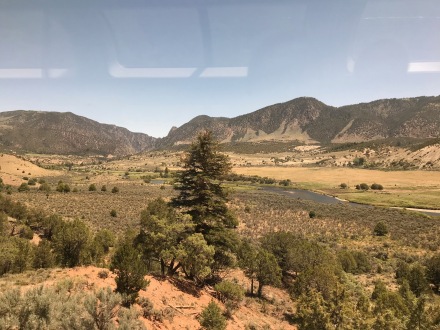 There are lots of people who canoe/kayak and white water rapid in the Colorado River… the tradition is to moon the train as it passes.  The people next to us were telling us to look out for the ‘bears’ meaning bare butts.  We thought they were joking, nek minit, there was an arse out for the mooning!  So that’s nice for the train passengers. 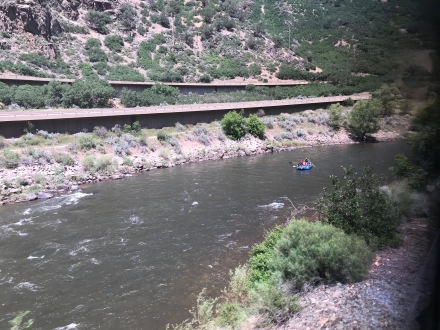 Going through the canyons was just breathtaking…. I’m not just because of the altitude! 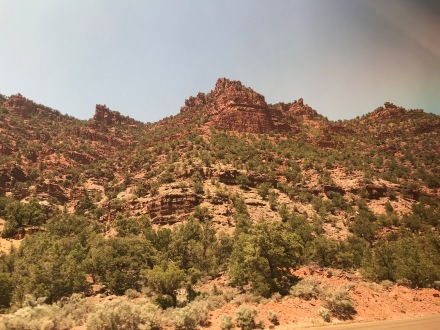 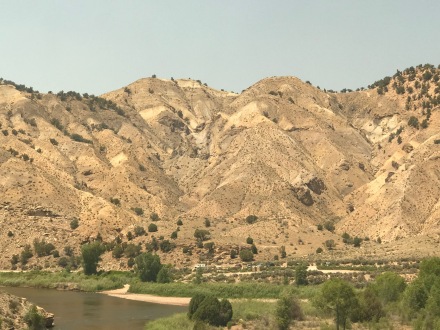 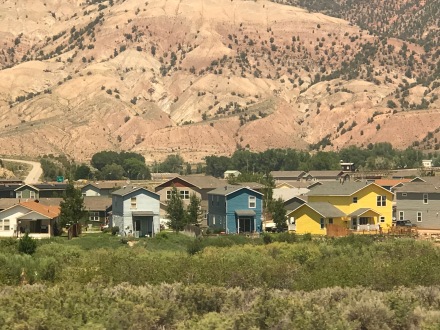 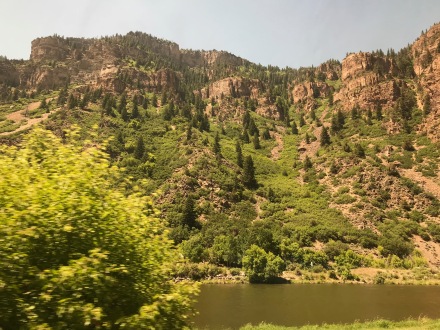 This building of this road was a contentious issue amongst the locals.  Lots of people didn’t want it, but it happened and they did their best to make it blend in with the hillside.  I don’t think they’ve done a bad job. 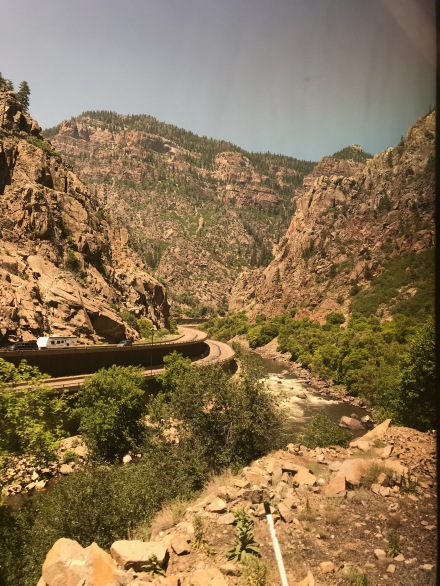 Then we finally chugged into Glenwood Springs.  It was actually a bit of a shame to get off the train.  We headed downstairs to get our bags organised, but Tim, who was a few roomettes down saw us walk by and raced out after us.  He almost pushed Jodie down the stairs calling out, “Shelley, are you getting off?  I thought you were going the whole way to the coast?”  Then he proceeded to stand in the way so I couldn’t get the bags out.  “Excuse me Tim, just need to get out bags.”  “Oh right”, he continued, “Anyway, about that yoga pose……” then he banged on until the train came to a complete stop about what I should be doing in my yoga practice – seriously Tim, Puck off! By the way, Jodie looked out the window the whole time this was happening, pretending she didn’t know me.

We got off the train and as we were deciding how we would get to our hotel, I noticed a man standing next to a small bus with “Glenwood Lodge” written on the side, as luck would have it he was there to pick up passengers.  We jumped on board. 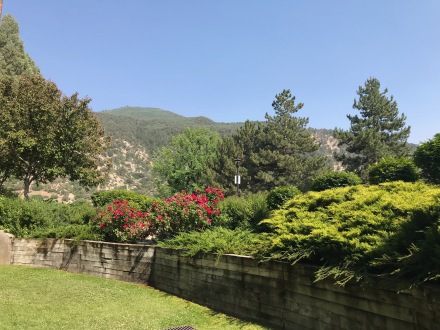 We popped over to look at the hot spring pool (which was FULL of people, including kids playing Marco Polo – very relaxing!) and we decided that we’d save our swim until the early morning to avoid the crowd.

Today – the 11th June is my birthday (and because we are day behind Australia, it means that I get two birthdays – I’m not complaining at all!!!)  I think I can say that I have gracefully (?) hit the official ‘mid to late’ 40s.  The day started out on the train where I was stalked by a short man named Tim, had a very ordinary breakfast on the train, followed by an unwelcoming reception at the Glenwood Springs Lodge, then we had a very mediocre dinner at the snack bar over at the pool.  Jodie had given me a massage for my birthday and when we were introduced to our massage therapists, I was a little apprehensive because… and I’m going to sound judgy here – he did not look the picture of health… but I took a deep breath and thought to myself – you’re in the rocky mountains on your birthday about to have somebody massage you – stop it!

The massage, let me just say, was one of the best massages I’ve ever had – ever! And Kevin was a very sweet young man.

A lovely end to a wonderful birthday spent with me favourite sister. 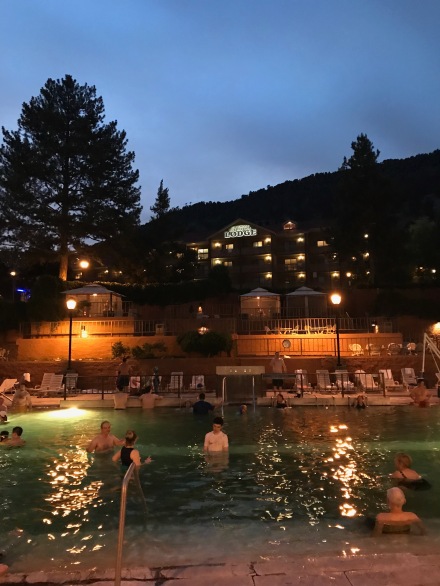 The pool was still open for another hour or so after our massages were finished, but we were covered in lovely oils and a bit dazed from being face down for an hour and half, so we went across the road and straight to bed.

By the way – thank you to everyone who left me birthday messages on Facebook, Instagram, via email and Messenger.  Believe me when I say that I felt all the digital love, even fall the way down in a canyon in the Rockies.  I tried to respond to all the messages, but if I missed one by chance – please know that I read them all and truly appreciate it.  You all made my day.