I left my heart…. in San Francisco

Again, we were pulling into our destination station a few hours later than expected, but easily picked up an Uber and headed over to San Fran and to our lovely little AirB&B in the suburb of Noe Valley.

The weather had turned a little chilly since we left the mountains, and San Fran wasn’t looking too inviting with her low clouds and her fog.  The forecast says it’s going to be like this all weekend!

We found our house and with fabulous instructions found a key and let ourselves in.  Just up the road is a bustling spot for restaurants and shops, so we stopped at a Greek place called Novy, sat in the window and watched the world go by whilst we feasted on moussaka, beans and a yummy chard dish.  It’s good dining with my sister, she always suggests the yummy things.

This was the view out the restaurant window. 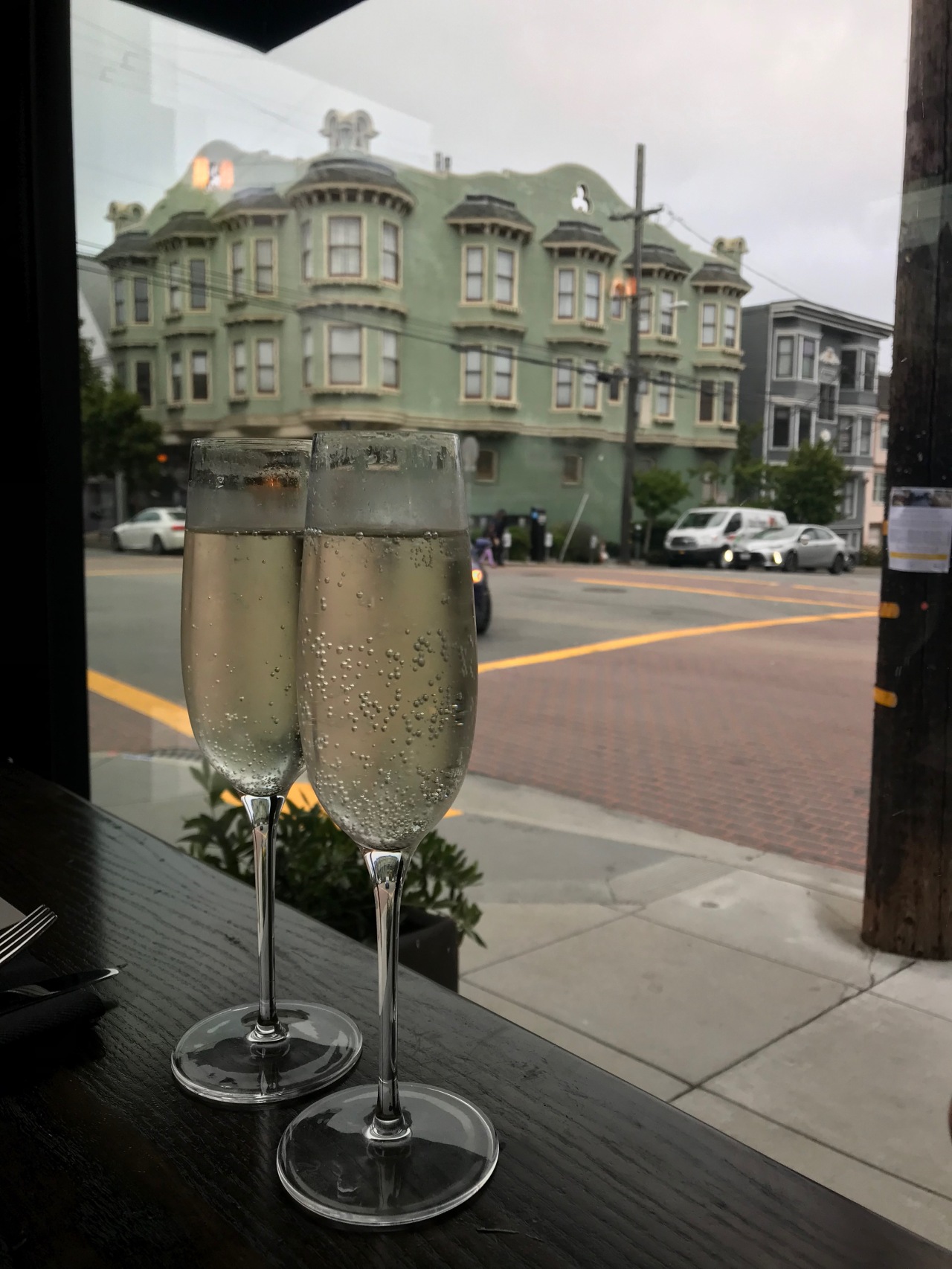 Then we walked home around the block to look at some different houses. 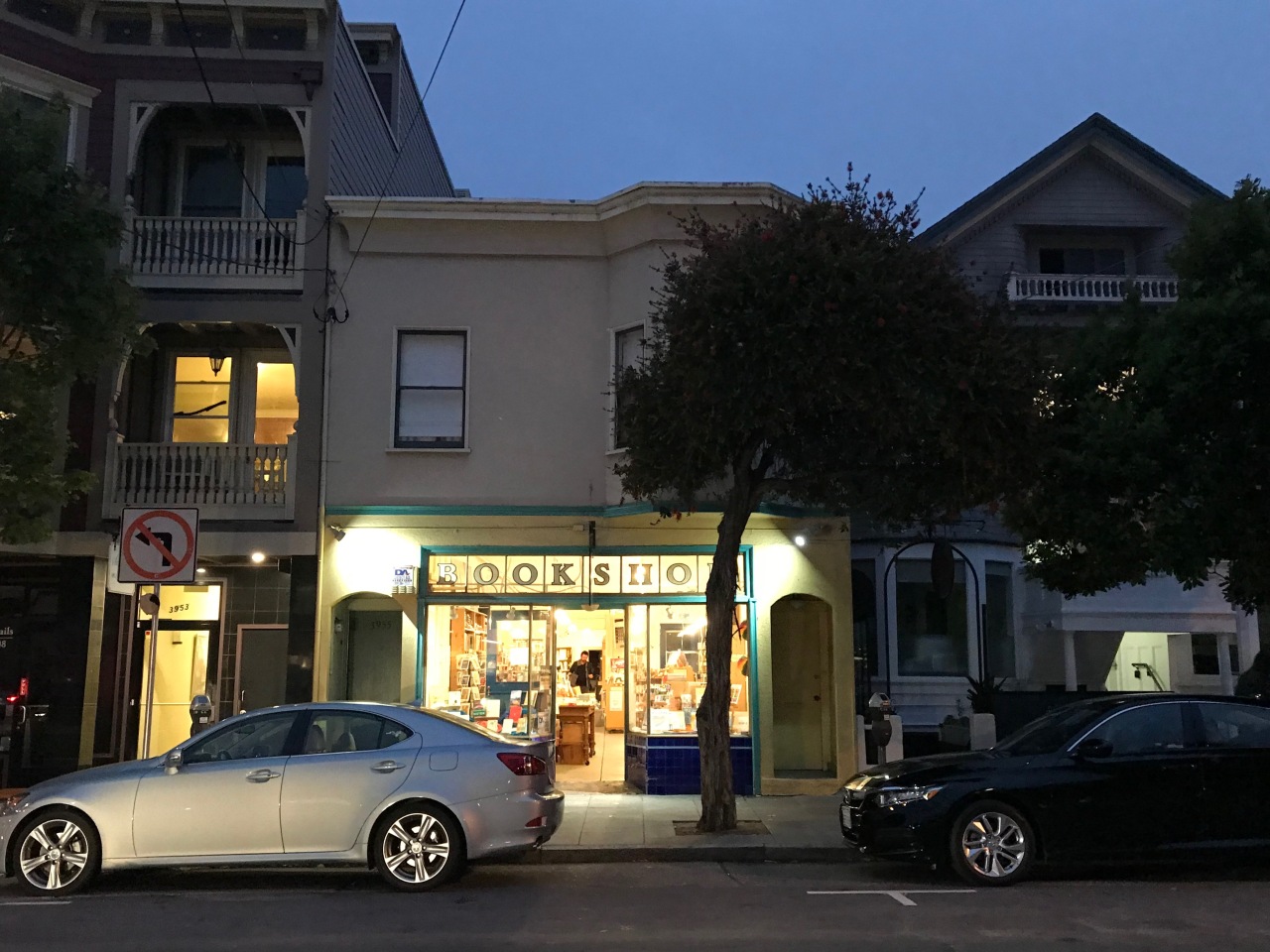 So, slept well and up early for another day (honestly ML – you wouldn’t believe how early I’m getting up!!!)  She was a little chilly this morning, so had to pull out the old sweater I purchased back at the alligator park in Florida – remember that?  That feels like a decade ago now!

As chilly as she was – the clouds were gone and the sun was shining – a perfect day!  In my next career change I’m going to be a weather lady – just guessing the weather! 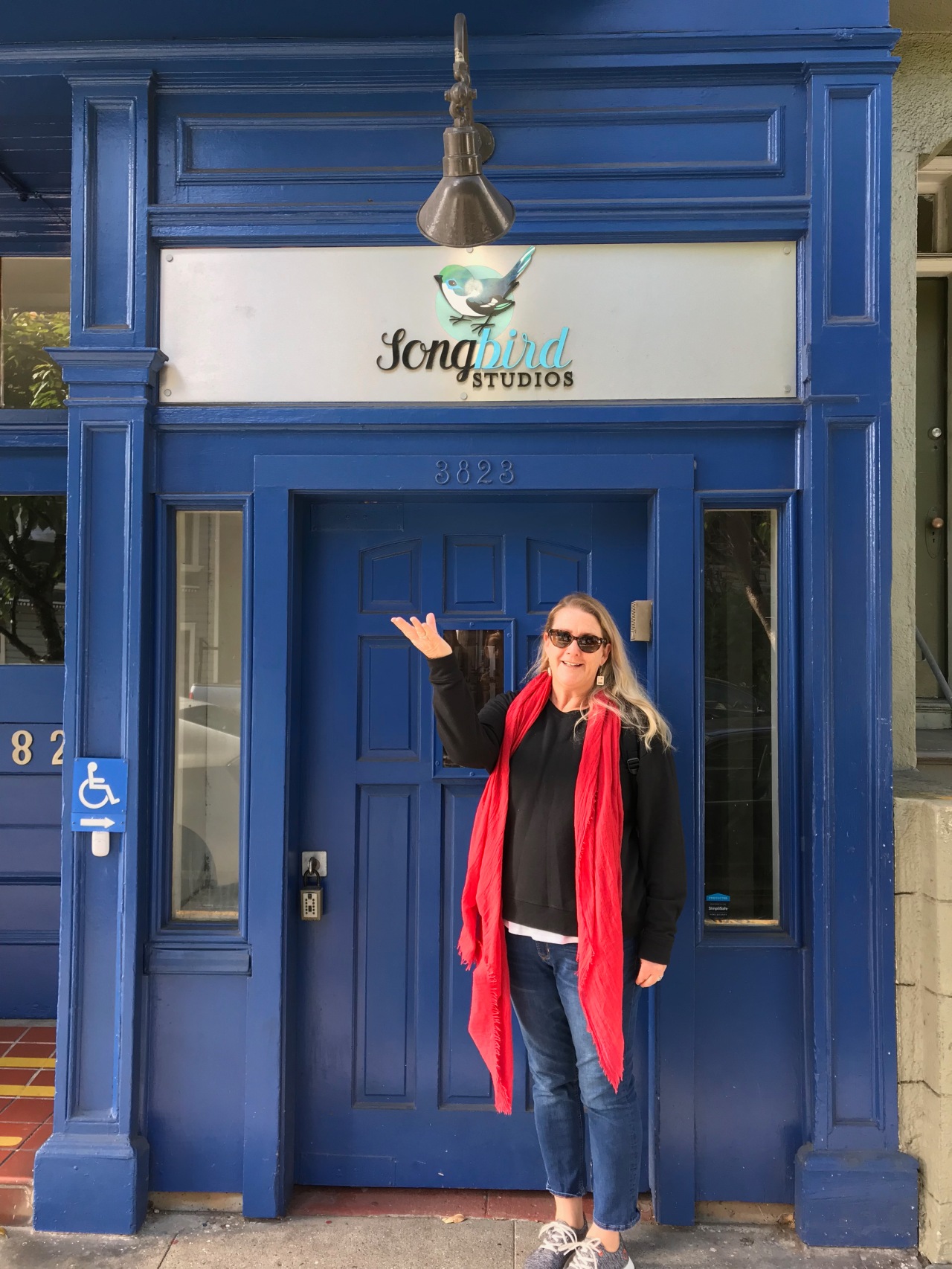 Today we walked 14.7kms and I’d like you to be aware of the steep hill situation in San Fran… look at this incline!  This wasn’t even the steepest. 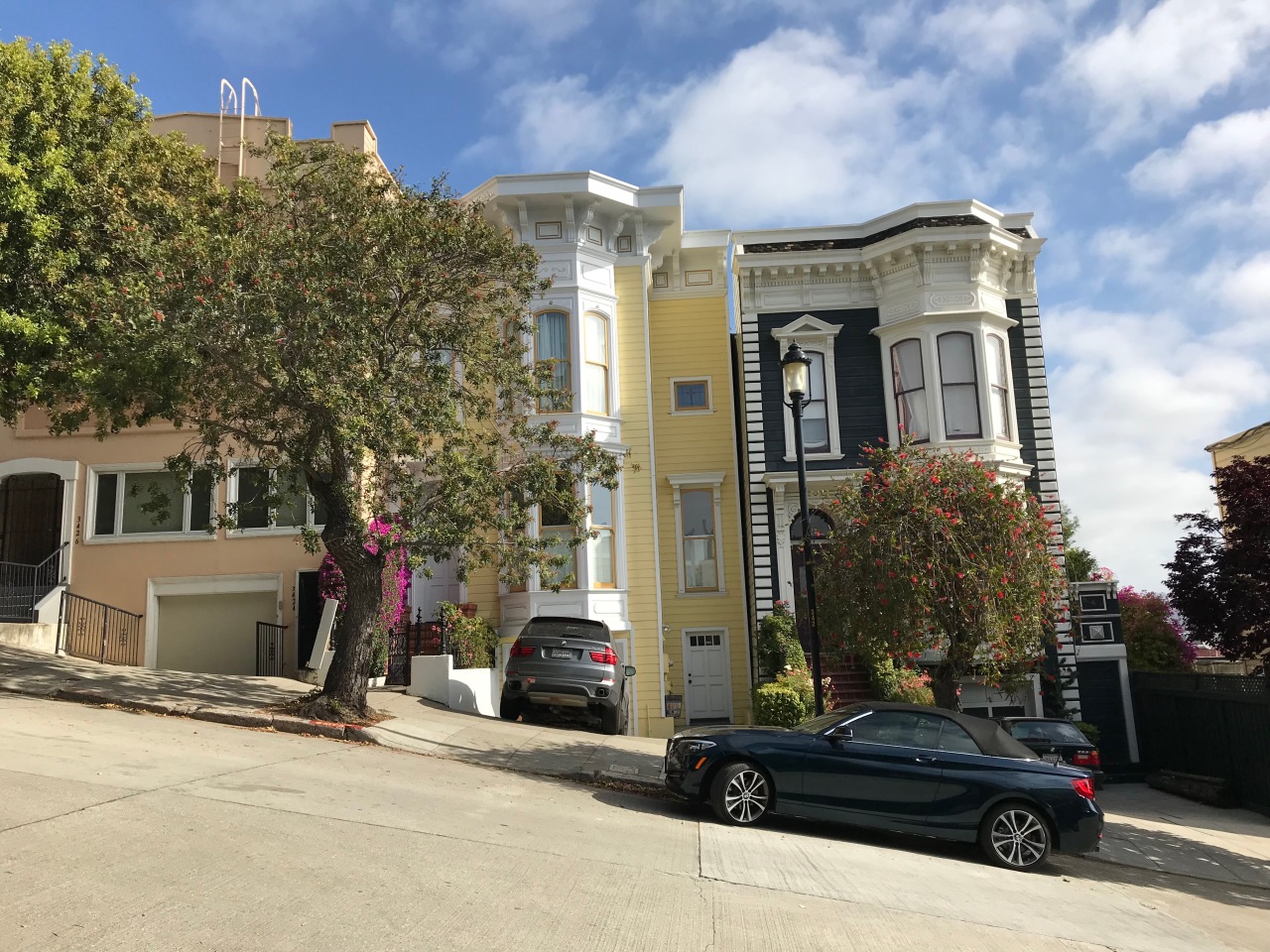 There were some gorgeous little yards as we walked around.

I didn’t take any photos in that area because it just didn’t seem appropriate or safe, so we quickly turned the corner and headed in a different direction.

I love the houses here.  Everywhere you look there’s another gorgeous house more gorgeous than the last. 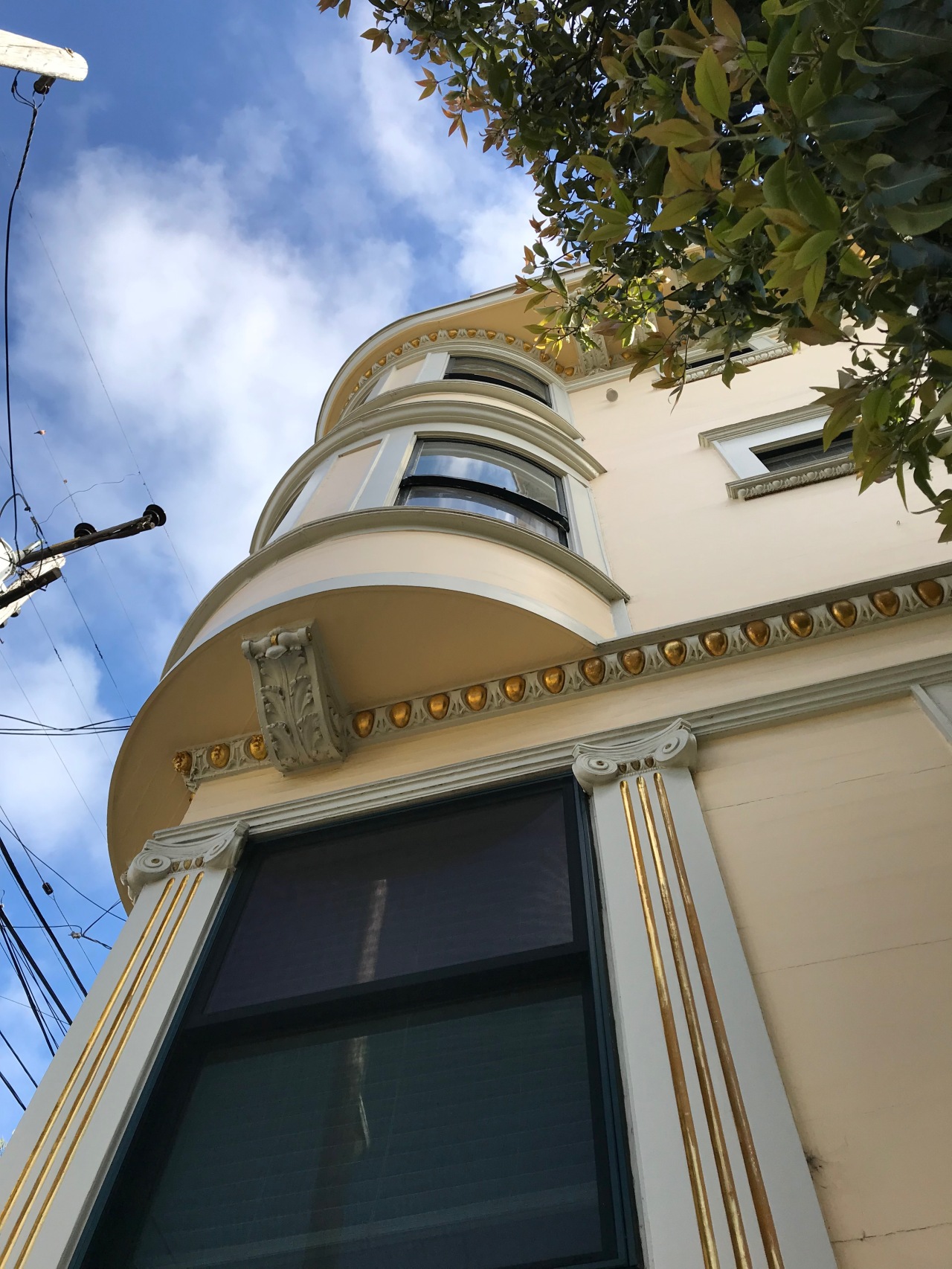 And some lovely pavement address art… 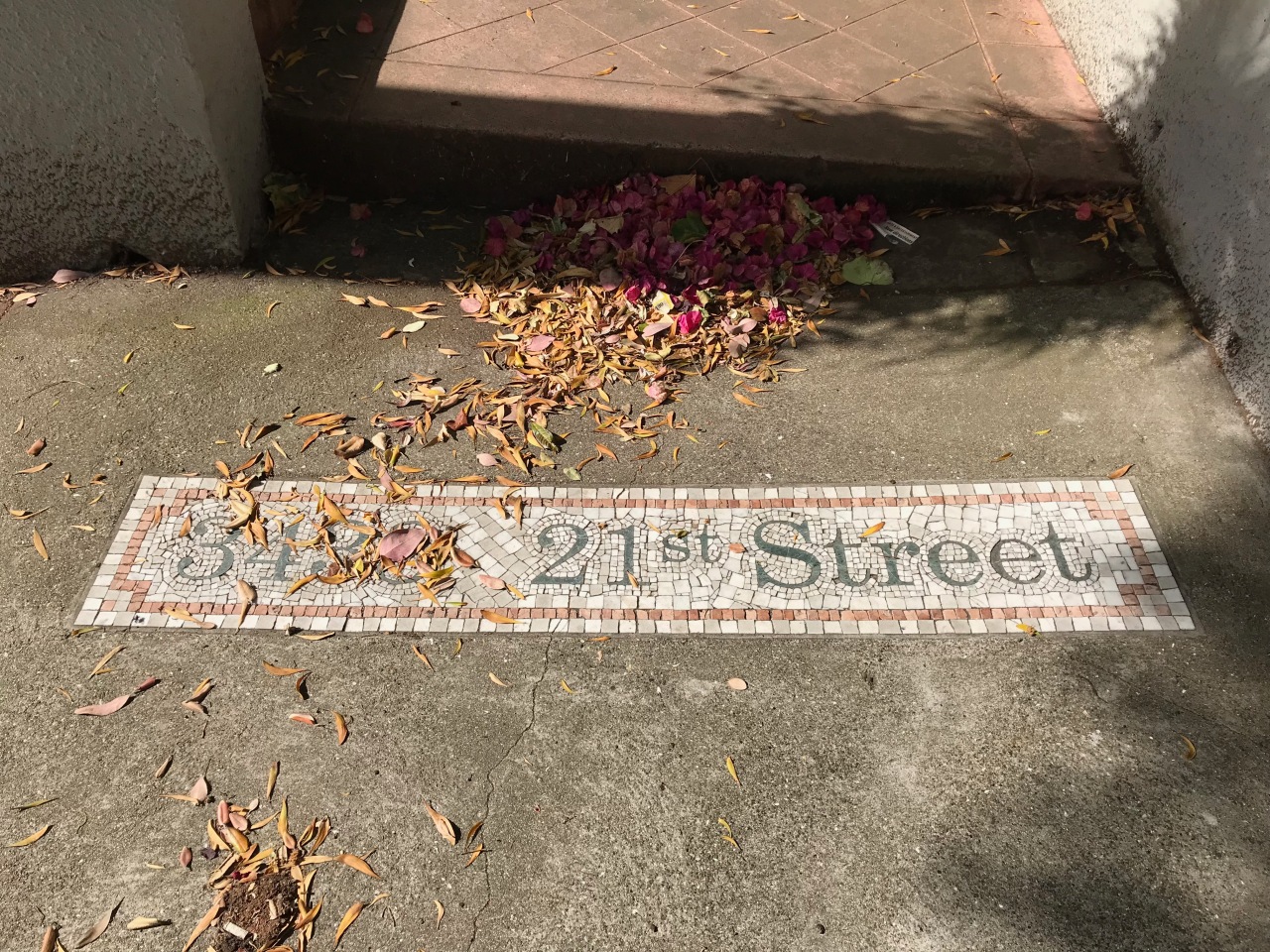 Jodie had been reading in the Lonely Planet about some famous murals in the Mission District.  We weren’t quite sure where they were, but then we as we were following our noses through the streets, we randomly came across the best mural of them all – the Women’s Building. 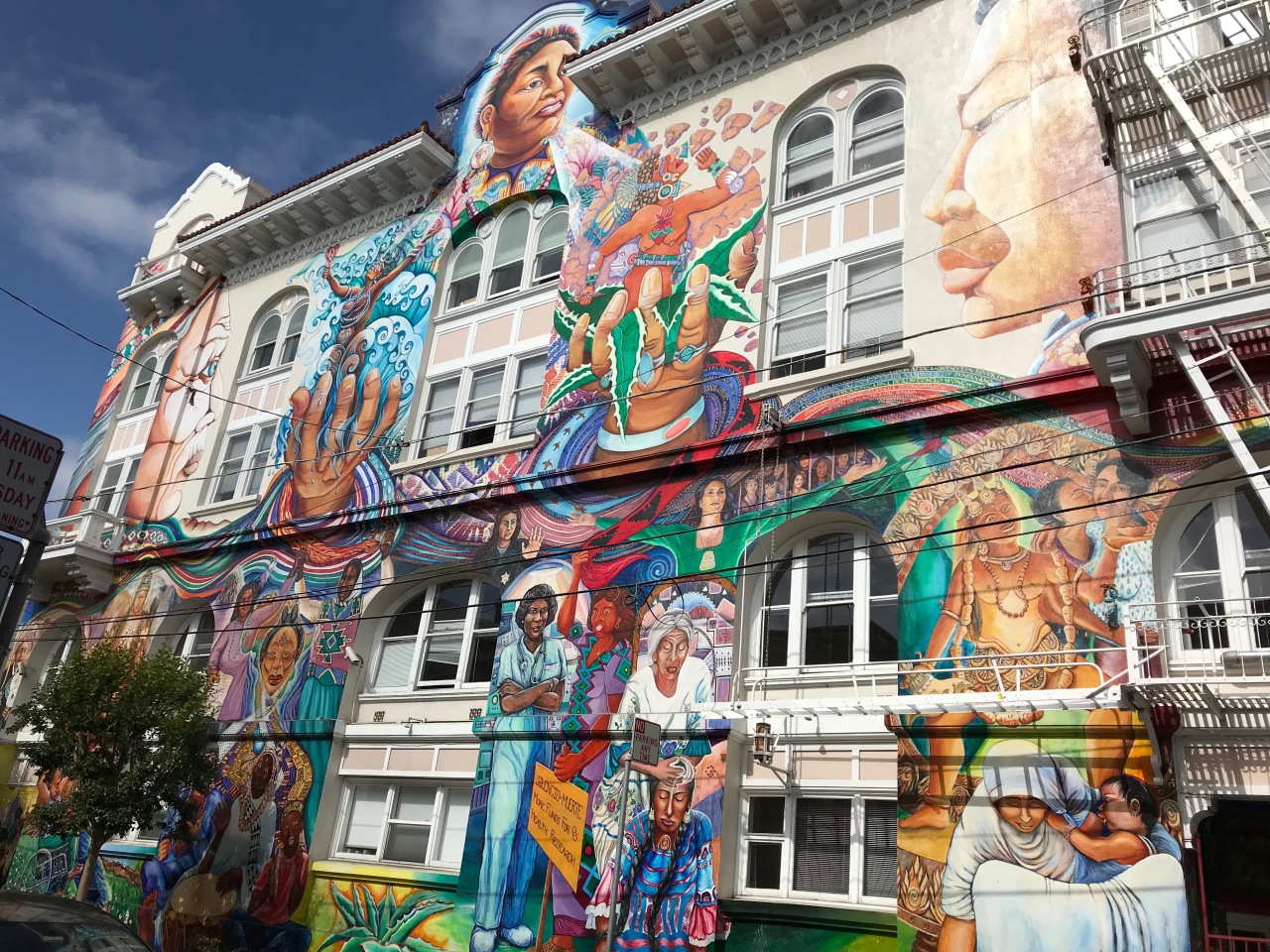 Then there were some more lovely houses….. take a closer look in the upstairs window. 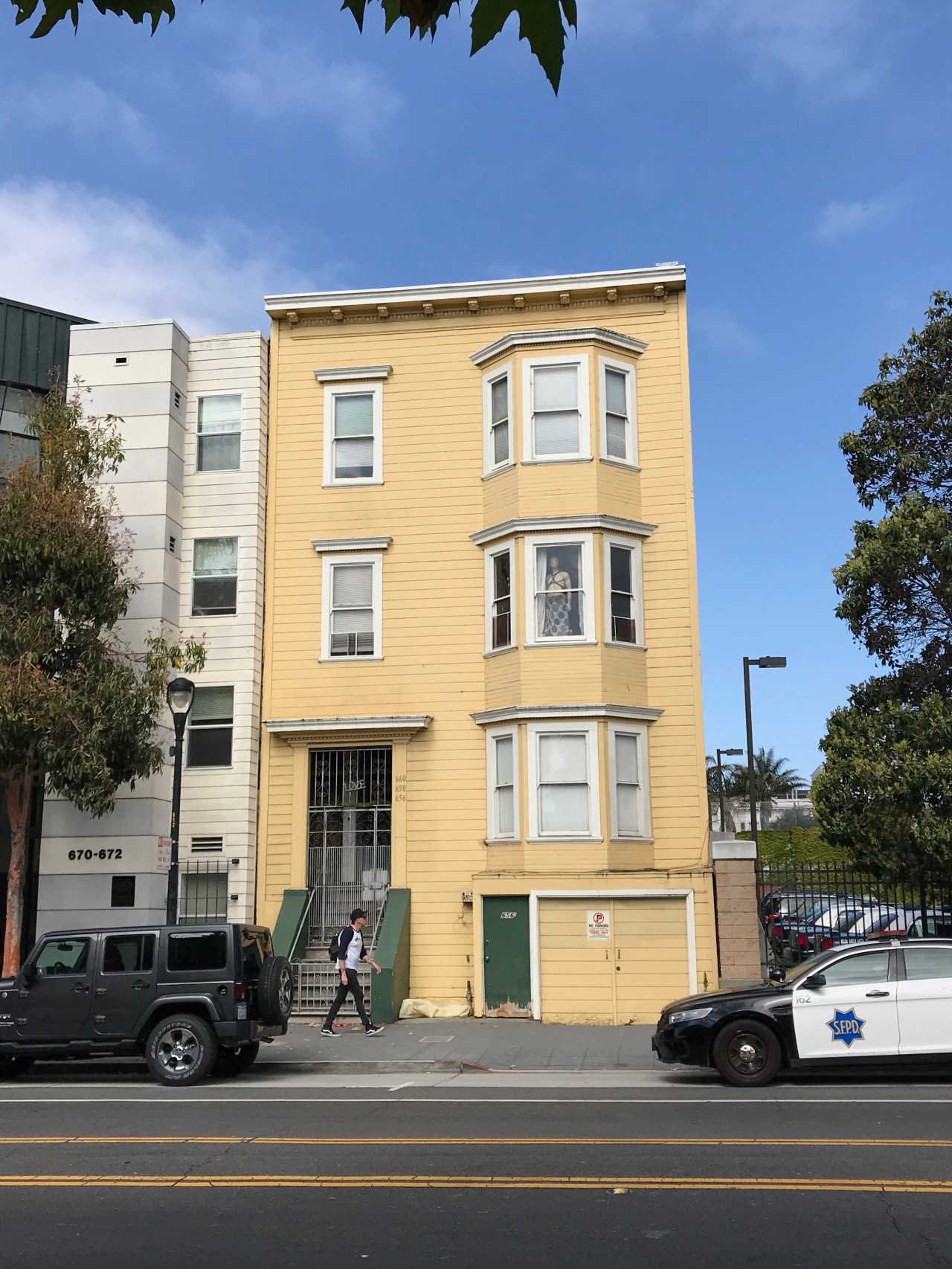 Here’s a bit of pavement art that I thought might have been a Banksy, but was informed by cousin that “Banksy doesn’t do the ground.” So I obviously just witnessed some other budding artist’s work.

To give ourselves a little break from the hills we reached Market Street, a main thoroughfare with trolley buses a plenty …. 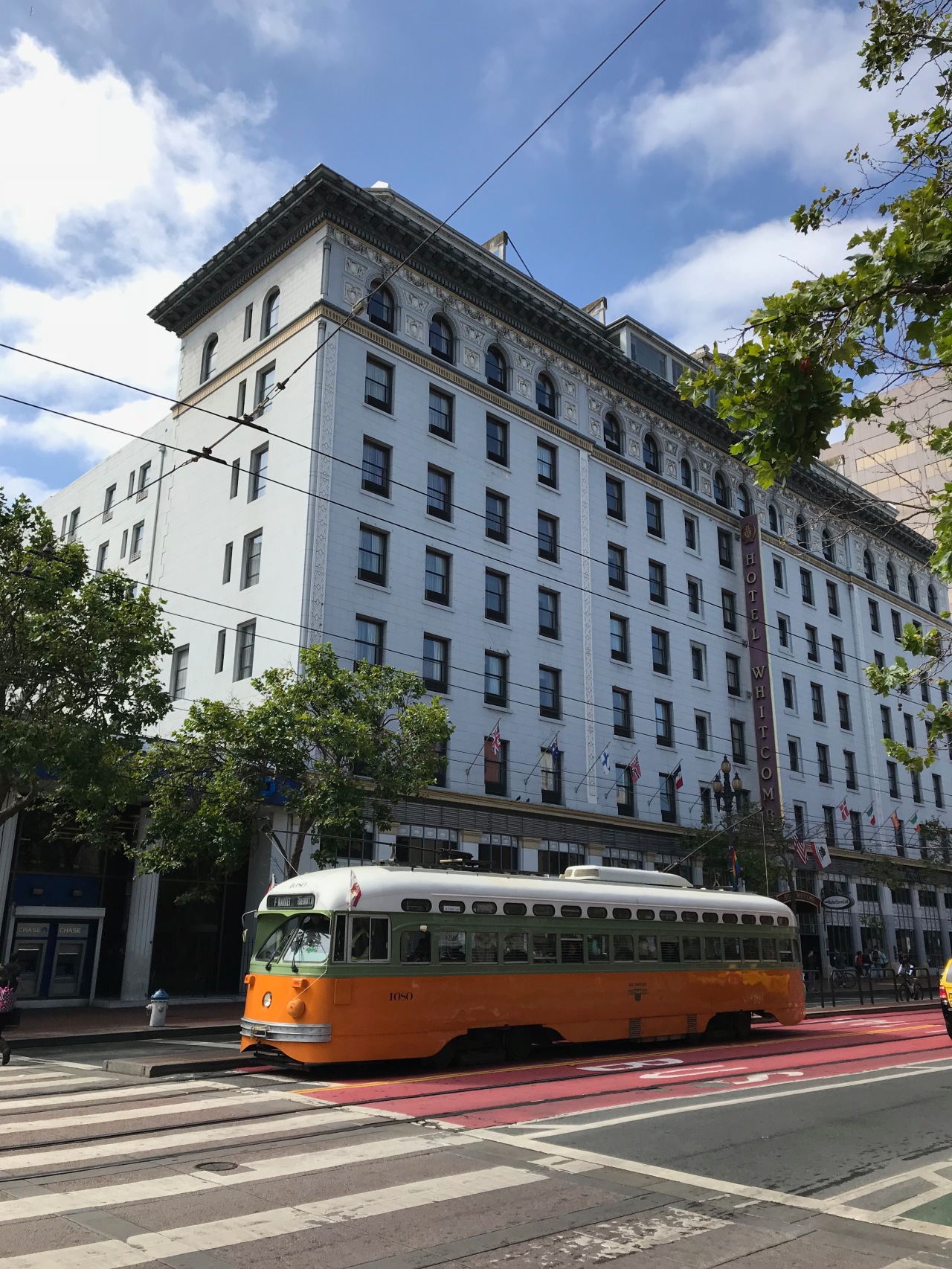 … and we jumped on, mastering the online ticketing system as we went.

Look at us, happy as Larry to be on the trolley bus.

There was a bit of architecture that we were interested in seeing along the way, so we jumped off at the public library thinking we would walk a bit more giving us a good chance to see the lovely buildings, but it appeared that we had jumped off at the most insalubrious area.  We both felt immediately uncomfortable and jumped straight on the next trolley that came along – about 30 seconds later and rode until we hit a safer looking area.

Have you ever seen fatter pigeons than these?

We were now in the shopping precinct and popped into Marshalls which is sort of like the US version of Marks & Spencer (sort of) and purchased a couple of items…. however these were not one of them – in fact, these made my toes feel weird and I hadn’t even taken my own shoes off.

Marshalls sits underneath this flatiron building, which coincedently is one of the buildings we were hoping to see. 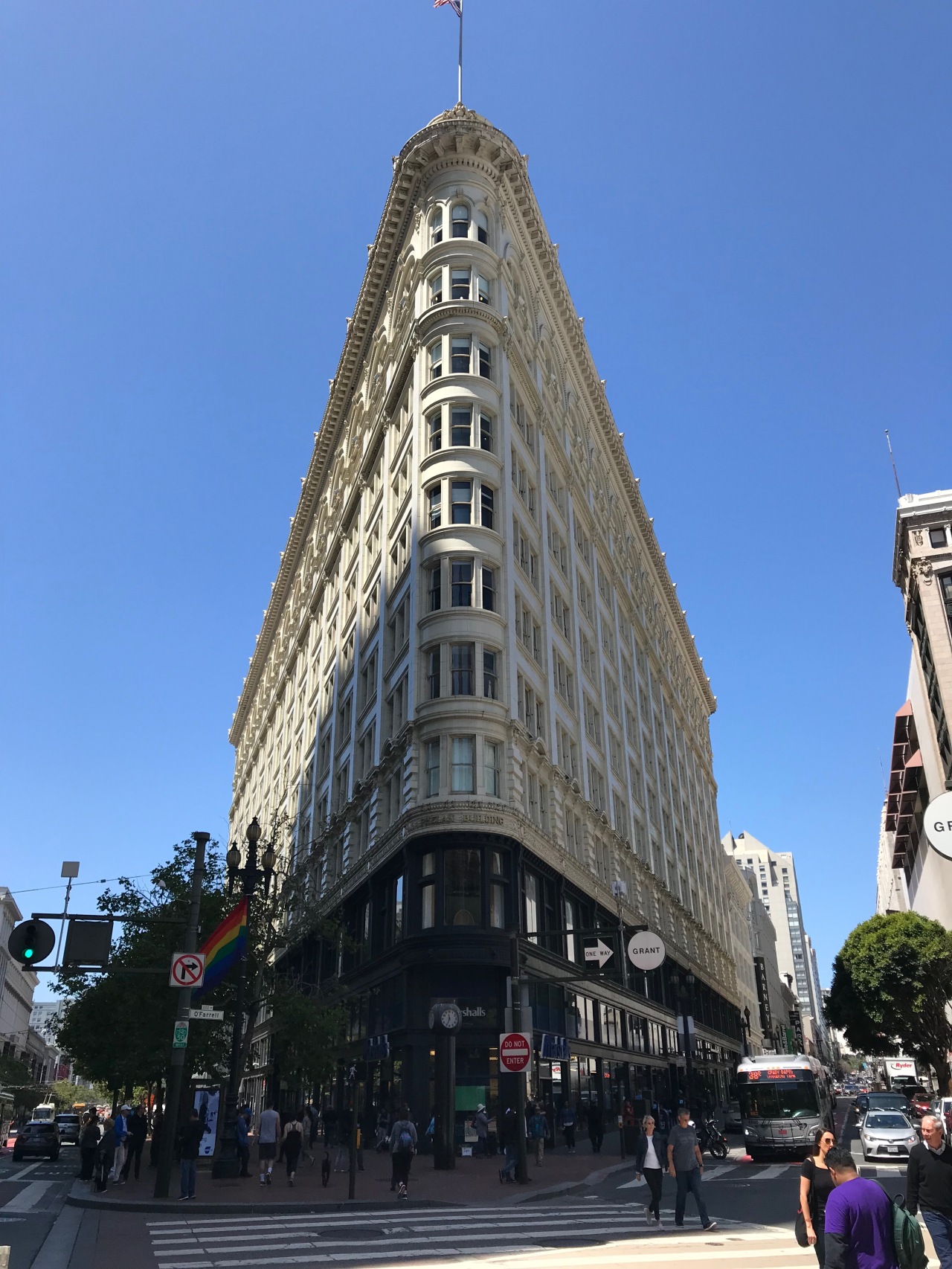 And right outside of Marshalls was this chap.  He was crooning to some old time classics sounding a bit like Michael Bublè.  I say good on you if you can rock a waist coat and tricky daks!

This is also the area where you can catch the cable car.  These are famous in SF and on the one time Me Jenny came to San Fran (years ago) she really wanted to ride the cable cars, but they weren’t running… so we were determined to ride one just for her.  However as this was the start people were lining up – like about 60+ people, so this photo was going to have to do. 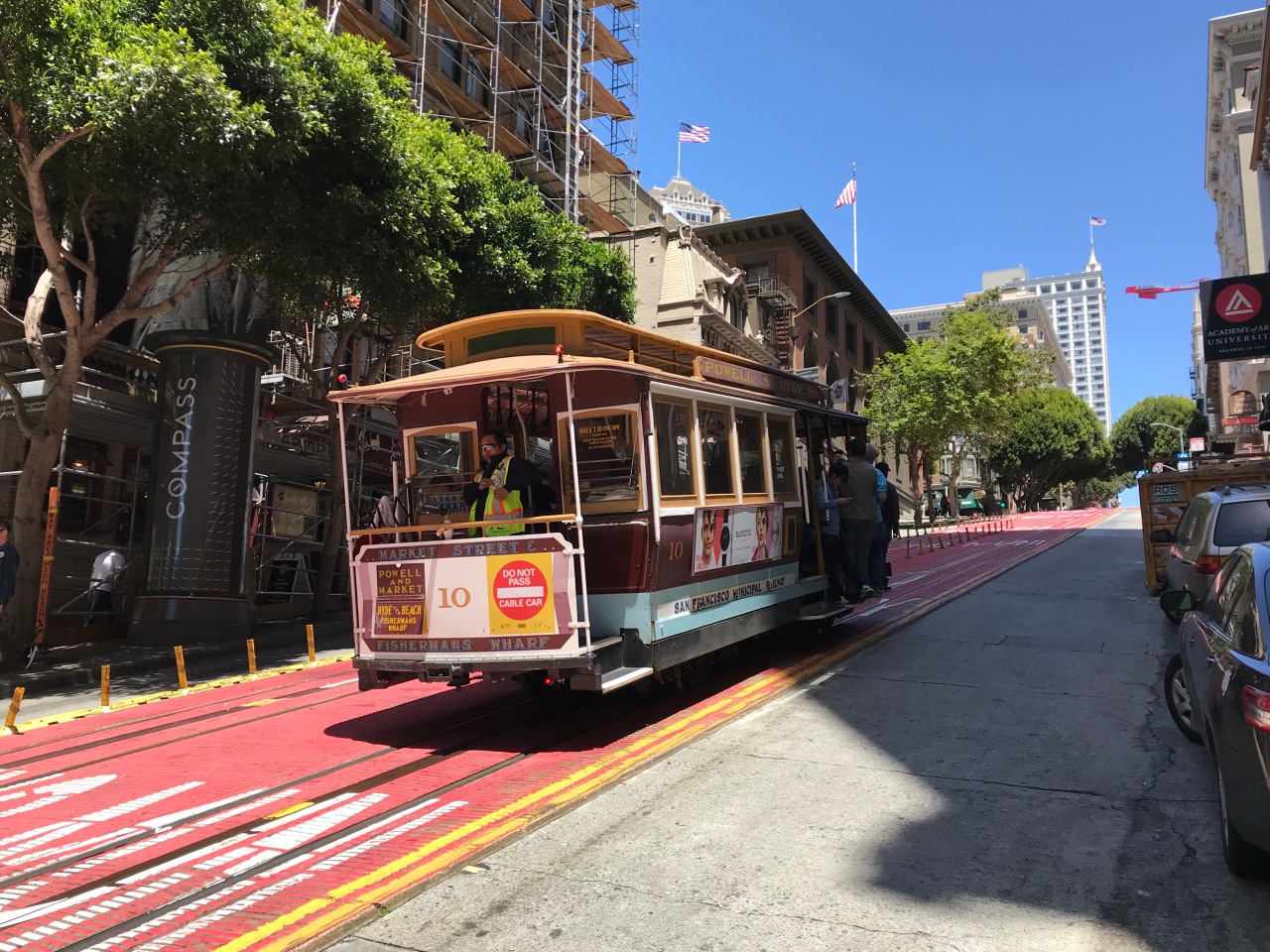 We zigzagged around the streets and ended up in Chinatown…. past the Willy ‘woo woo” Wong Playground.

and smack into a Chinatown dragon dancer’s festival.

These are the spare dragon heads…

The crosswalk is a chinese design – very cool.  This is apparently the biggest Chinatown outside of China.  We noted that it felt like a ‘real’ Chinatown in that it wasn’t just Chinese restaurants, but that people were actually living there.  It felt authentic. 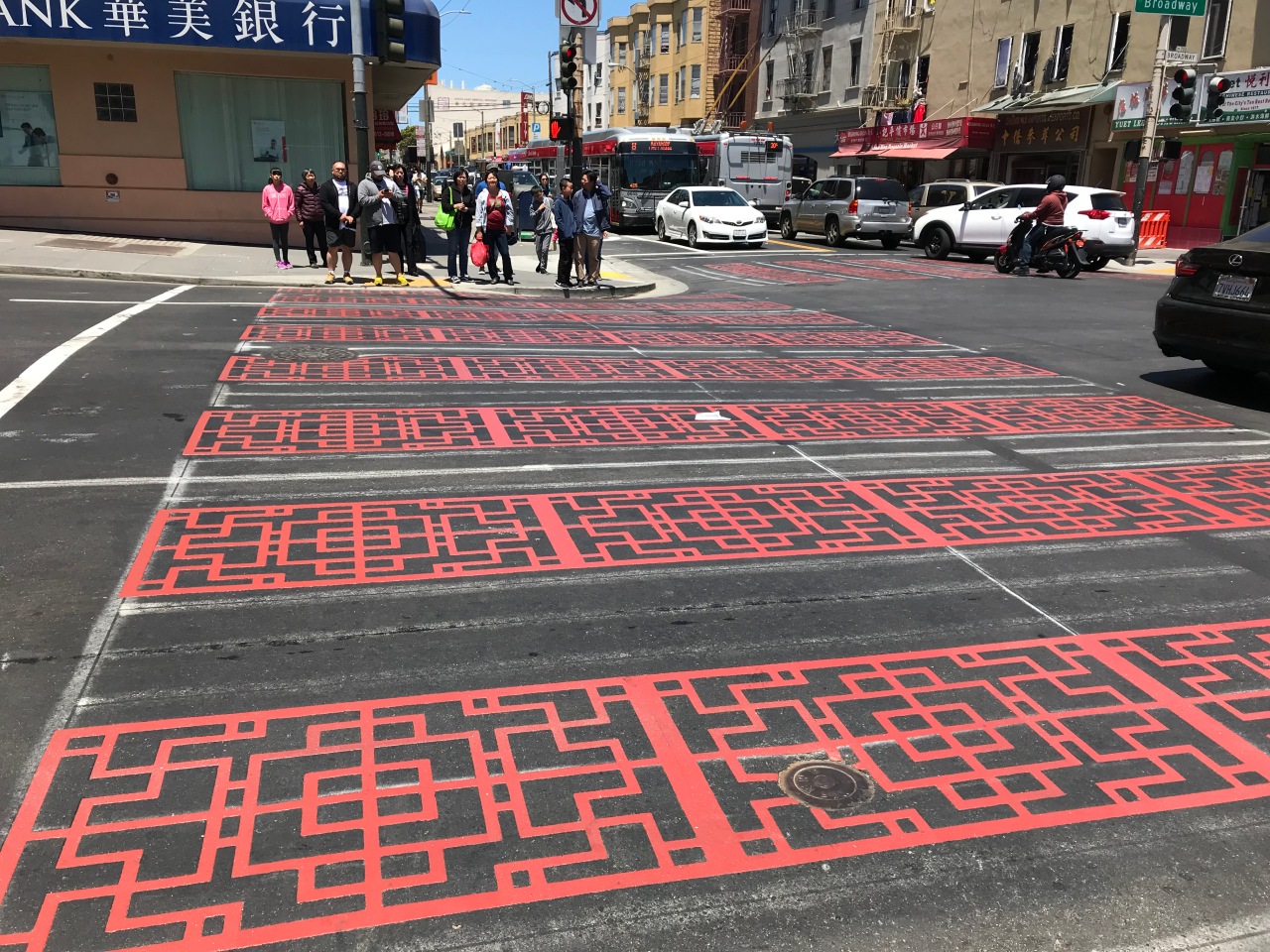 After Chinatown our mission was to make to the top of Lombard Street, the curviest street in the world.  To get there we had to hike up several massively huge steep hills, plus an enormous amount of stairs (Madeline, you would have been so proud of me!)

(This is not my photo – I was concentrating too hard on putting one foot in front of the other to take any photos.)

Once we got to the top though – this was our view….. That’s Alcatraz in the distance!

And here’s a close up…

And in the other directions…

The top is called Russian Hill and it’s very fancy with its big houses and even bigger views. 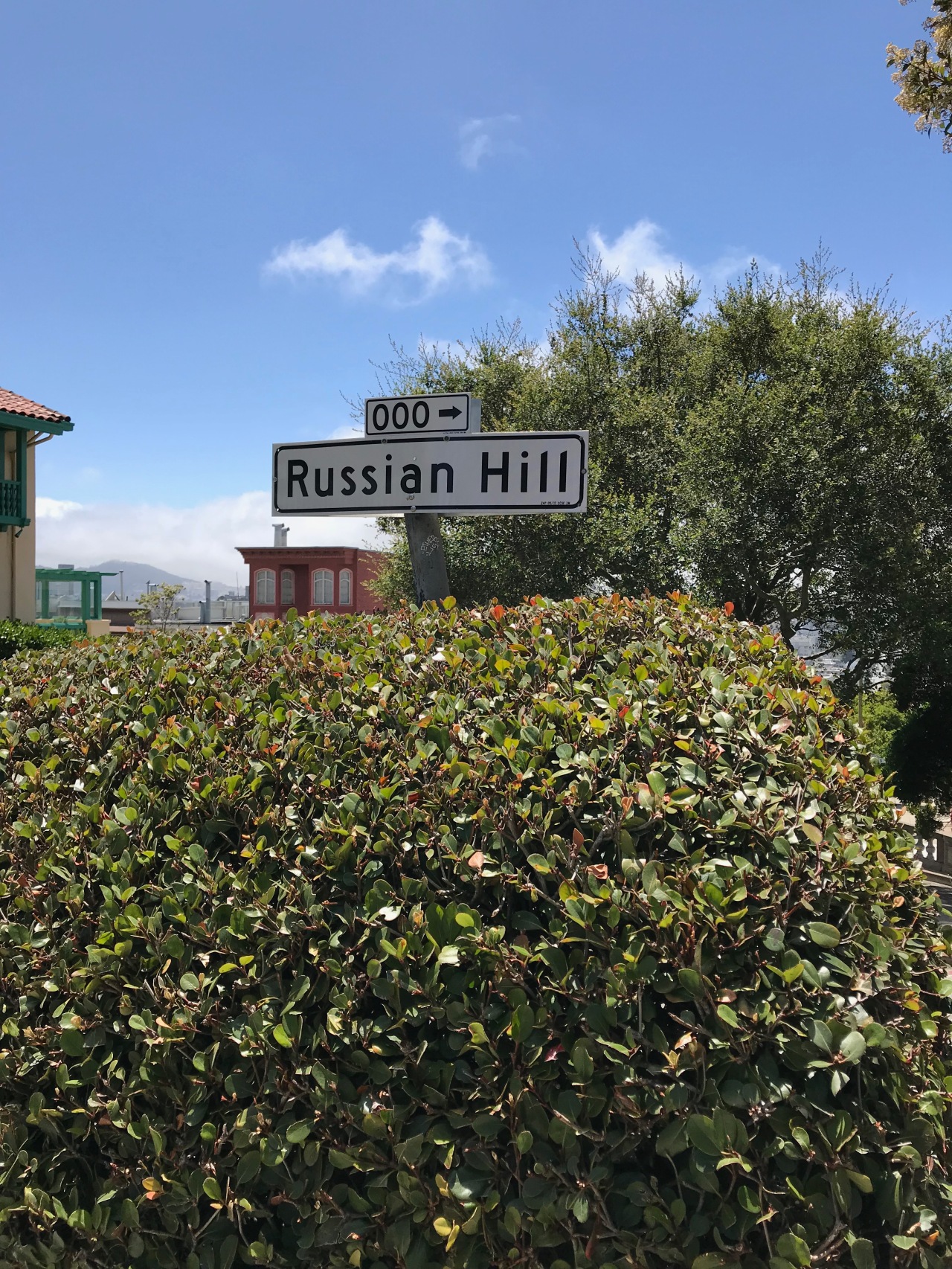 I love wandering around and finding random treasures along the way… We had to pop into a little pizza place to use their bathroom and the waiter was so lovely and helpful.  On the way out he wished us a pleasant day and suggested we have ourselves an ice-cream from Swensen’s – the original sherbet ice-cream place up on the corner.  It felt rude not to.

Then with ice creams in hand we made it to the top of Lombard Street with about 6,000 other people all taking photos and walking up and down.  Cars were driving down with the passenger filming the whole experience.  This photo doesn’t look like there’s many people, but they must all be behind me.

I felt terrible for the local people who live here – this must be constant.  One young lady who I don’t think understood a lot of English was asked by a security guard not to climb up on the balconies – as they are private property.  She just giggled.  Apparently she was up on the second floor! 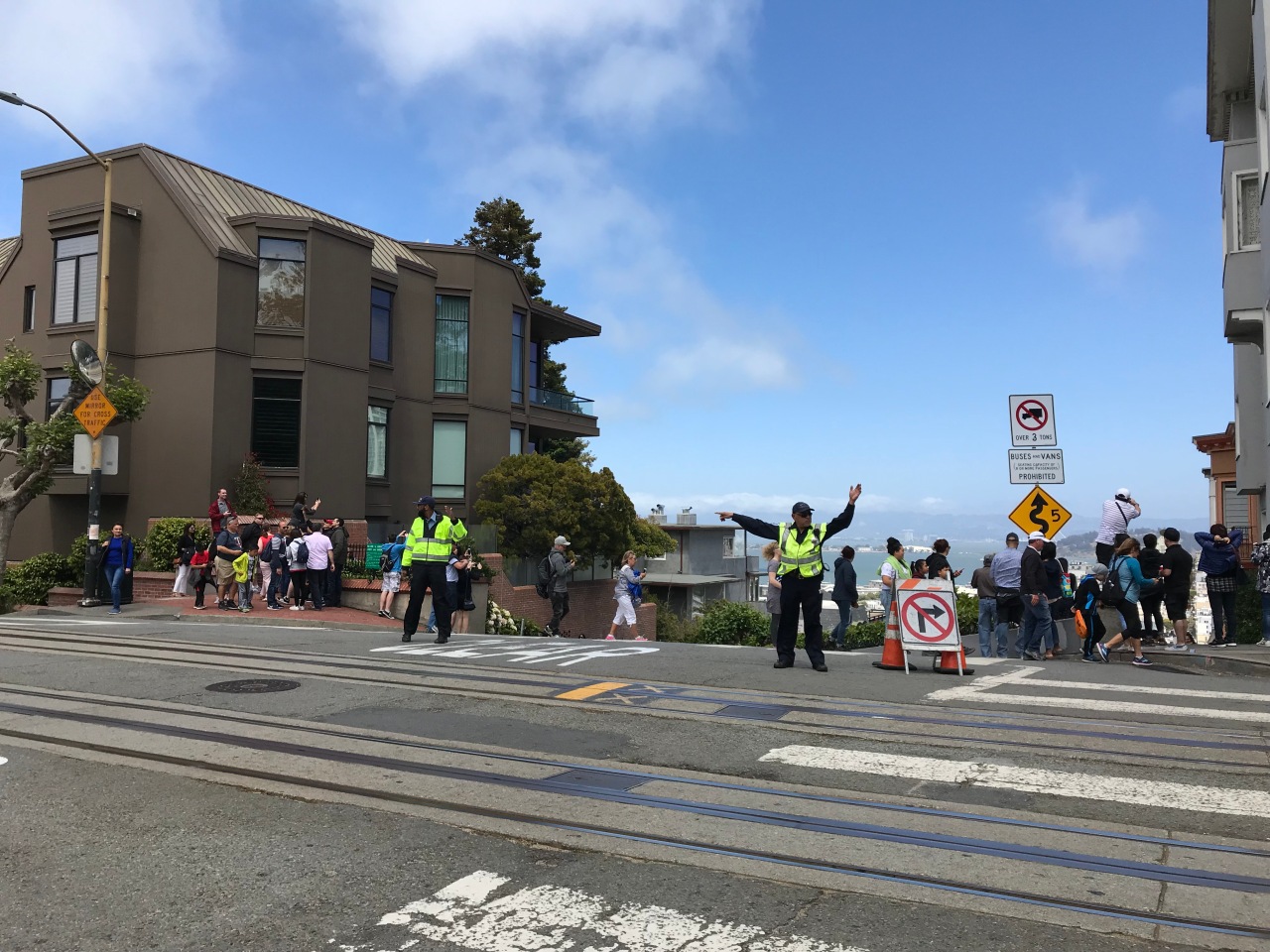 We were going to walk to the bottom, but we realised that the cable car rode along the top, and we didn’t want to walk back up again, so we had a quick look and then waited for the cable car.

We rode it all the way down to the bottom.  Some would ask why we didn’t ride the cable car up the hill and then walk down and sure, you can ask that if you like.  It’s a very good question, but we had a lovely day and our feet, knees and legs don’t want to think about it anymore. 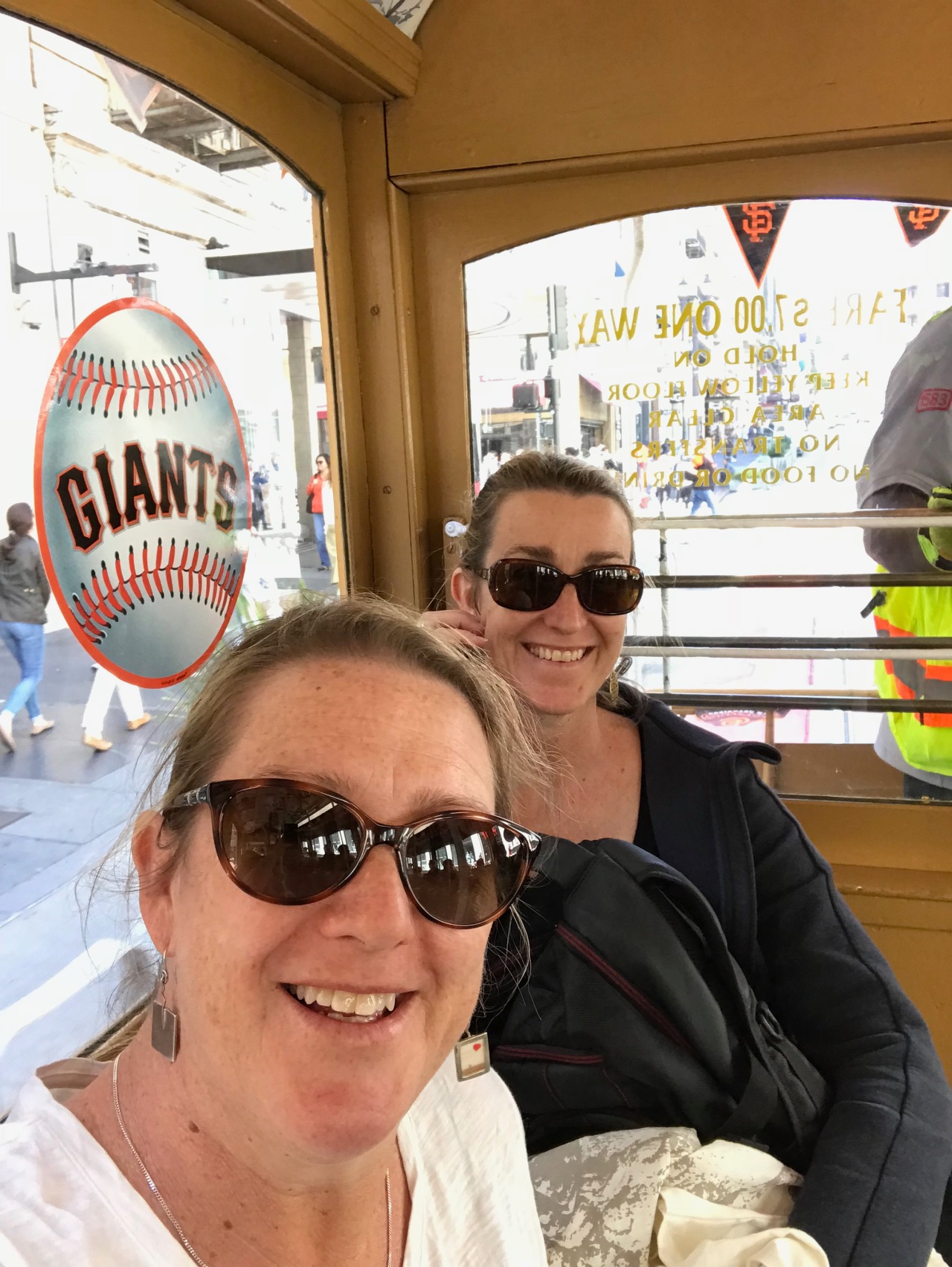 Being the San Fran transport experts that we are now, we got off the cable car and straight onto a trolley bus all the way into the suburb of Castro, which is a predominantly gay neighbourhood.  It was lovely and colourful with the rainbow flag flying in every window and even on the crosswalks.

We were going to get the bus home, but we decided that no – we hadn’t walked up nearly enough hills yet (I’m talking 45 degree angles people!), so we walked home!