It was overcast and cloudy when we said goodbye to our lovely little San Francisco Airbnb…. the train was going to be on time – damn it! so no Chloe’s Cafe croissant french toast covered in strawberries for us this morning.  Our little apartment was down the right side of the house and round the back.

We boarded the train and made sure that we got seats on the right hand side as that is where all the scenery was going to be – although we didn’t hit the coast until quite a few hours into the trip.

We did travel through quite a bit of marsh land…

Then miles and miles and miles of vegetables – like so many miles that you’d think that this stretch of California was feeding the entire country.  There were all sorts of things growing from cabbage to strawberries and lots of people working hard picking them.

Kay had mentioned to us that there were oil fields on the way, but I wasn’t quite sure what to picture – well, this is it – little oil pumps for a few miles.,,,

There were rolling hills and a few lakes and then finally – The Pacific. 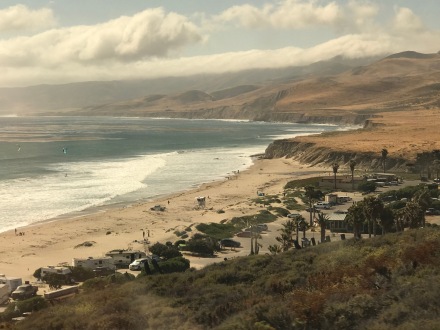 The water was a little disappointing though.  It was a bit murky today with lots of floating weed.  There were still people swimming and surfing in it though.  Maybe this was a good day?

There were a few trees along the way that made us think of home – Geraldton in particular!

And a few boats were parked just off shore and we wondered if they were the coast guard.  Just like at home, there’s a fair bit of coast for them to guard!

Here’s one of the little bridges we went over.

And this was our view as we went over it… 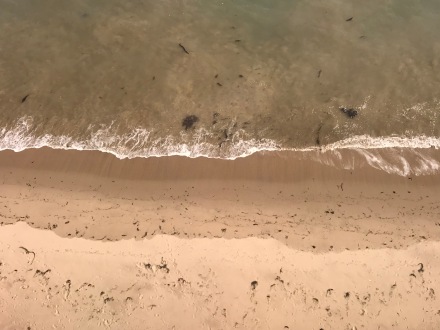 And people on the beach waving at the train – happy to say that all pants were kept pulled up this time.

We stopped at few towns with unfamiliar names, but then we stopped at Santa Barbara and I know that both Oprah and Ellen live not far from there…. This house was right next to the train station – I don’t think either lady lives in this house, but we were close.

They actually live up in them thar hills…  We were hoping to snag some tickets to a taping of Ellen while we were here and I applied ages ago, but we’ve heard nothing and Ellen has been in Africa with her gorilla foundation, so it just wasn’t meant to be.  I still may go to Warner Bros Studios though and just pretend I was there. 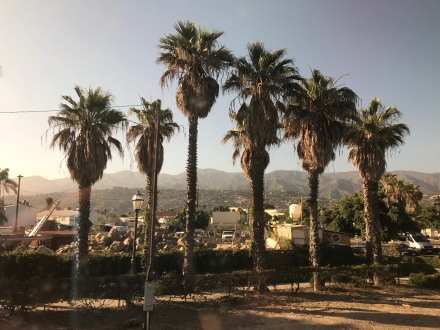 We packed the best picnic for our 12 hour train journey….. baguette, cheese, artichoke & spinach dip, cheese puffs, some chocolate a couple of bits of fruit and strawberries….. this was all that was left.  Don’t worry, we ate that too! 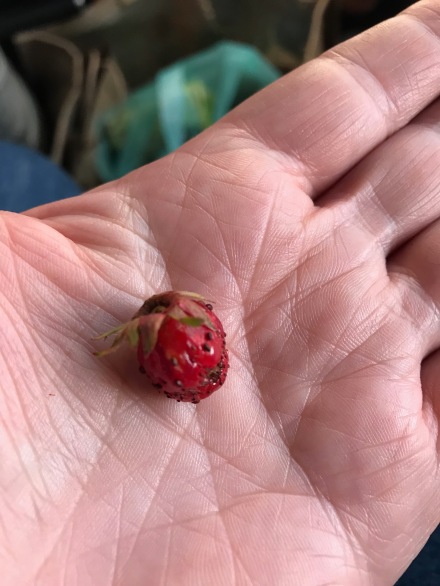 The journey was long, but it wasn’t that bad – there was lots of interesting things to look at and we saw some deer along the way.  However, by the 11th hour we were both ready to get off and into our new abode in Hollywood.

And that was our last train journey.

I can highly recommend to anybody wanting to travel across the states via train.  It was comfortable and interesting with amazing scenery.  The train can run very late, but it  actually worked in our favour most times because we didn’t have to be anywhere at a certain time and it gave us more time in the place we were in, so as long as you’re flexible – it’s a bonus.