Today was going to be a big day, but first things first – brekky.  In the breakfast area there is a bottle of olive oil on every table.  No butter, no salt, no pepper – just the essential accompaniment to any dish.

This is looking down on our foyer waiting room which is typical of the buildings in this area where many families would share one building.  There is always a central open courtyard with a number of rooms off it – each room housed one family.

We were headed for Place Espana – a must see if you come to Seville!!!  It was walking distance, as is everything really and our walk took us through the lovely Jardins de Murillo & Jardins del Alcazar (the Royal Palace). It is all very picturesque.

And even space for a little sit down when needed…. don’t you love the school photo position.  Feet together please Jenny!

Along the foot paths there are marked sections for bikes only.  Each little silver emblem on the road marking the way has a picture of a little bike, but if you look at it upside down, it’s a smiling face.  Most people kept to their rightful side depending on their mode of transport – foot or bike, but some were still yet to learn the Sevillian ways… 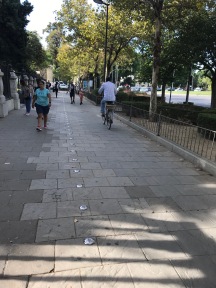 This building is incredible and this photo does not do justice to the sheer size of it.  It was built in 1928 for the Ibero-American Exposition held in the next year.  It’s got ALL the architectural styles in there, Baroque, Renaissance, Moorish – It’s got the lot!

With a massive forecourt and it’s curved shape and fountain in the middle, it made a perfect backdrop for Me Jenny’s uno dos tres – TURN 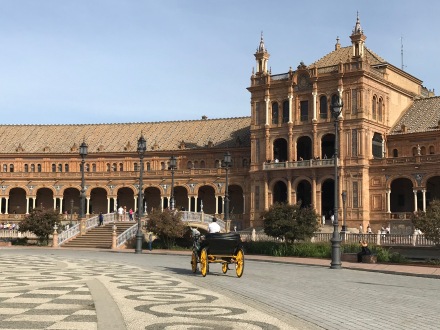 A great place to sit in the shade for a little water up! 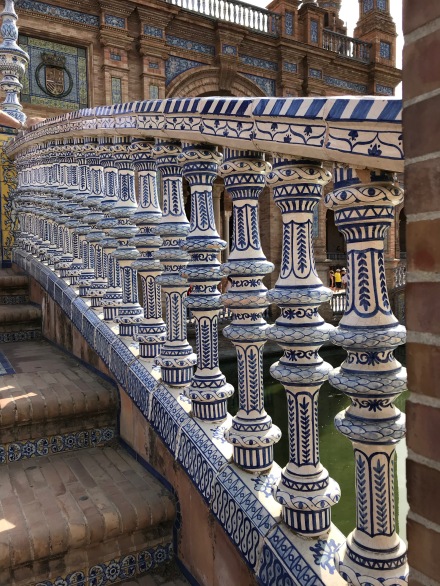 Now there are people everywhere and 98% of them are all taking photos – of the buildings, of each other or of themselves… the other 2% are asking strangers to take their photo for them.

The whole way along the front there are these little alcoves with tiles and a mosaic tiled map of each region in Spain.  I noticed that one of them was called “Jaén” and it sounded and looked a little like “Jen”, so I ushered Me Jenny over to take a photo.

There was a couple sitting on the bench having their photo taken by a stranger and when they finished and said their thank yous, etc…. they stood here to see what type of photographer the stranger was.  Jenny sat for a few moments which they didn’t notice, nor did they detect my close proximity, so I thought ‘Oh for goodness sake, they can be in the photo – where are we going to display this picture anyway?  It’s just a bit of fun…’

They did finally move and a small queue had formed behind me for other people wanting to do the same thing.  I directed Jenny to point to her ‘sort of’ name so that you could see the reason she was sitting in this random spot.  It was then we realised that she couldn’t lift her arm or shoulder (recently broken and replaced) any higher….

A quick swap to her good side and we were away.  We don’t even know where the region of Jaén is! 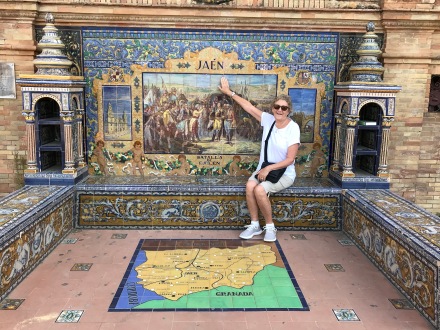 The front of the building even has a moat (I don’t think it’s for defensive purposes, because they left out a massive chunk at the front gate!) You can even hire row boats to have a paddle up and down.

There is a lovely big river that runs through the centre the city separating Seville and suburb of Triana – the home of gypsies and flamenco!

Earlier we’d booked an English speaking ‘skip the lines’ guided tour for the Cathedral as the ‘walk in yourself’ lines were hideous!  I won’t bang on about our experience with our tour guide, but let’s just say it wasn’t the best.  Anyway, we were in the cathedral… 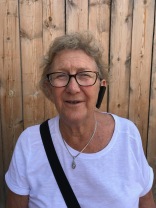 And it was amazing…. it was HUGE!

You can’t imagine how big – this was just one side and I think I’m standing about half way down! 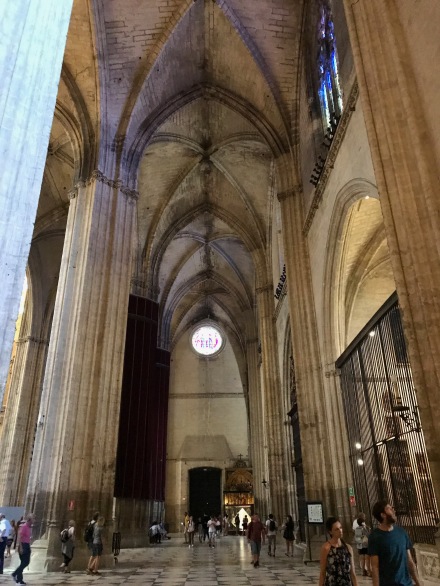 Everything is ornate and gold or silver and generally covered by bars.

This one statue is made entirely of silver.  You can only just make out Mary holding a baby (I assume it’s Jesus) and in the other hand she’s holding a….. well our guide told us it was a grenade.  She told the whole story about the statue and the meaning and kept mentioning the significance of the grenade.  You know when you know something is wrong?  An English lady who lives in Spain said, “You keep saying grenade, but in English we say Pomegranate.  A grenade is a bomb.”  Then she did this amazing mime to explain what she meant by bomb.  The guide later referred to the ‘siimbolism’ of the same fruit and called it a “pommygrenade”.  I don’t know if she was being derogatory to the English lady or not? (I’m kidding, I am.) 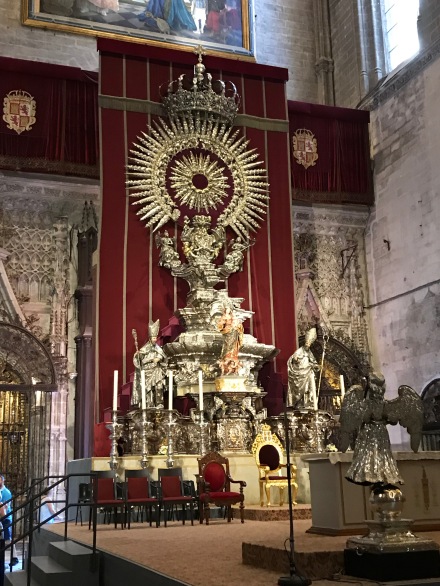 I can’t decide whether I like this alter or not.  It’s a lot to take in and it’s covered, if not completely made of gold which is a little over the top.  I do however like the wrought iron gate and the filigree work. 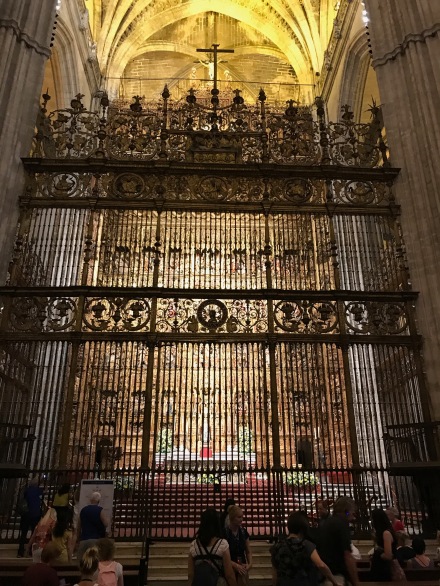 Christopher Columbus is buried in the Cathedral in this tomb.  You can see the pommygrenade under the front guy’s foot. 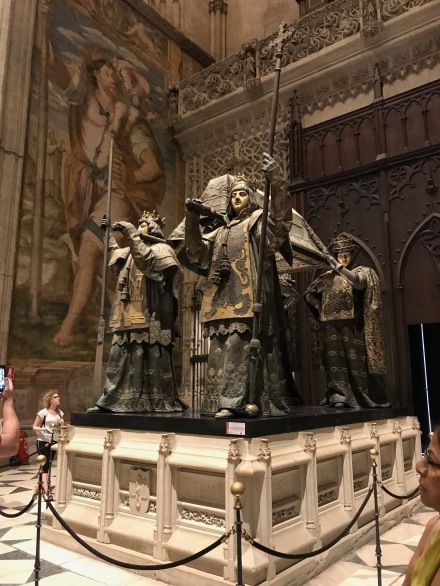 There are chapels off rooms that are off other rooms which link back to a different chapel – the place is huge.  This is one of the ceilings of one of the chapels. 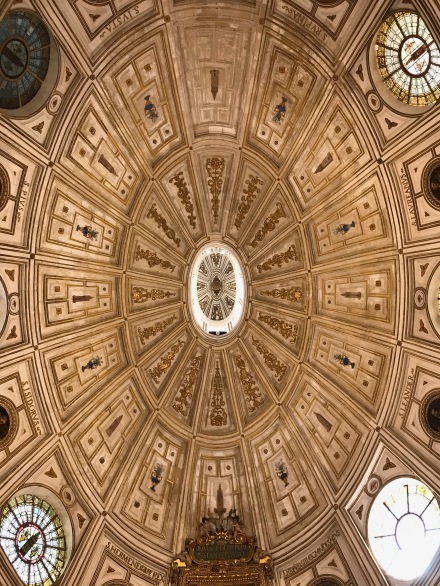 On the left here we have Jenny’s new day hat and on the right – we can stop looking…. I’ve found the holy grail.  It’s not as big as I thought it would be. 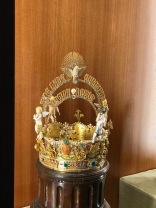 One of the most bizarre stories about this cathedral, (which funnily enough we didn’t hear from our cathedral tour guide, we heard this story from a different guide on a different tour – nothing to do with the cathedral!) is that there is a crocodile hanging from the rafters (a wooden replica) that has a great story to go with it…

So there is a wooden crocodile, an elephant’s tusk and what appears to be a horse’s bit hanging from the ceiling.

The story goes that in 1260 King Alfonso X’s tried to marry his daughter off to the son of the Sultan of Egypt.  The son showered her with a number of exotic gifts, including spices and materials, a crocodile, an elephant and a giraffe. When the boat arrived from Egypt with the now deceased animals the princess was not impressed.  So for that reason and the fact that they were from different countries, spoke different languages and followed different religions, she refused to marry him.  A variation of this story ends a little nicer for the animals – Apparently the princess refused the gifts and the animals lived out their lives in the gardens of the Royal Palace (the Alcázar) and when the crocodile died it was stuffed and put on display.  The crocodile was eventually replaced by a wooden replica and the croc hanging in the church today is a second replica of the first replica (the first was destroyed in an earthquake!)

Sevillians love this story and don’t want it to be lost over time.  It’s odd though that they’ve chosen the cathedral to hang them in, but there they are.