The Criminal Minds of Sarah Island

We’re in the little town of Strahan (pronounced Strawn) on the west coast of Tassie.  There is a fabulous boat tour – ‘Gordon River Tours’ or ‘World Heritage Tours’ that leaves from Strahan and heads up the Gordon River via an old penal colony island called Sarah Island. 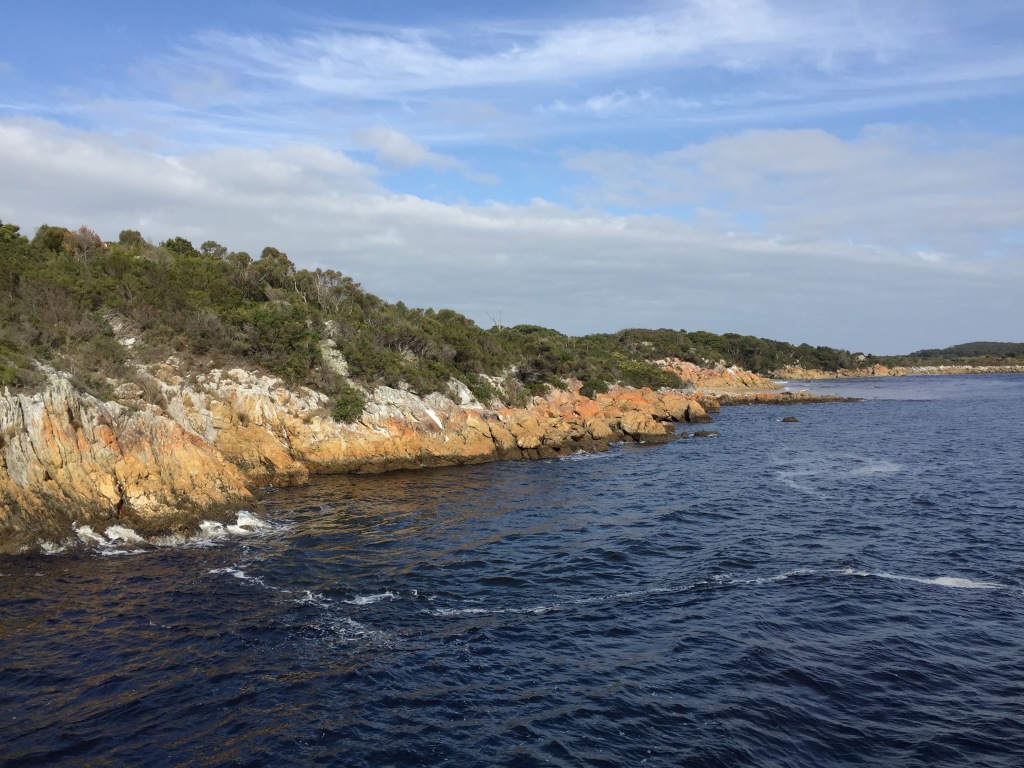 The boat first takes you across Macquarie Harbour and out of “Hells Gates” where the harbour meets the ocean.  The name was given to the entrance by the convicts who were being sent to Sarah Island – Hell on Earth and the name stuck.

Jenny has tried many times, over many trips to Tassie to get onto this boat and for whatever reason – the weather was too bad or the timing wasn’t right, she has never made it, so on this trip, she was determined to get on that boat!  We pre-planned, staying in Strahan for 2 nights, just in case and all our stars aligned, cause we had all the time in the world and the weather was perfect.

Jenny being very excited to be going to Sarah Island…. or she could have just been cold?

Once on the island we were given the option to take a map and wander around on our own or we could join one of the two tour guides.  Normally,  I like to just wander around and generally if we do join a tour guide, we stay with them for the first 5 minutes and if they’re dull we peel off on our own.  However, this tour guide, ingrid was absolutely amazing.  She painted a mental picture of what life must have been like for the poor bastards to ended up there in 1822-1833. She told dramatic stories, she made us laugh and after a whole hour, I still wanted to hear more.

Ingrid was part of tour guides from http://www.roundearth.com.au and was brilliant!

Sarah Island was named in 1815 by James Kelly after Sarah Birch, the wife of the doctor Thomas Birch who financed his expedition.  Although I’m sure she wasn’t too happy about it as it was designed to be a terrible place for convicts who had reoffended whilst still under sentence.  It had a reputation as a place of unspeakable horrors and a living hell, largely due to the exploits of one of the island’s ‘colourful’ characters, Alexander Pearce, the Cannibal Convict.  He escaped twice with a group of people.  The first time he was found alone….. and the second time he was caught with a sack of body parts!  It was also the setting for the novel For the Term of His Natural Life written in 1860 by Marcus Clark.

For the first half of the settlement it was a terrible life for the convicts.  They were punished every day receiving lashes from a special cat of nine tails – 3 cat of nine tails braided together with pieces of metal embedded to ensure it cut through their skin.  They weren’t allowed to fish and were given little food.  They were made to sleep in a draft hut and were put to work building boats with the Huon Pine. 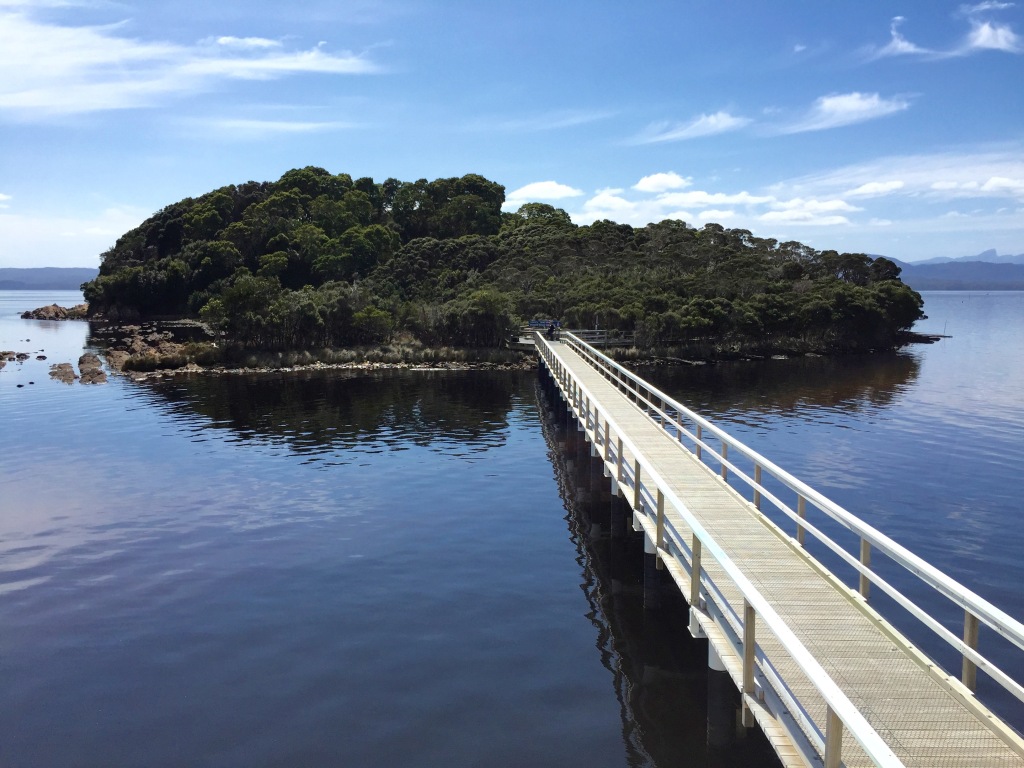 It apparently rains 300 days of the year here…… how lucky were we?

About half way through their time at the settlement a chap by the name of Mr Hoy arrived.  He was a wealthy Scotsman who was big time into boat building and had heard about the precious Huon Pine, so he made his way down there to get his hands on some.  Shortly after he arrived there was a broo-ha-ha with the Commandant who was losing control of the convicts. He spat the dummy and left the island in disarray.  My Hoy saw an opportunity and stepped up as the new leader.  He realised that punishing and starving the convicts wasn’t going to get him quality boats made, so he promised them better sleeping quarters, more food and better conditions.  Funnily enough the number of escape attempts and stints in solitary confinement dropped dramatically.

These were a row of solitary confinement cells that were the size of graves.

The new Governor, Governor Arthur heard about this new fangled way of doing things and how well the convicts were working and he built the new penal colony, named it after himself and ignored all the advice from Sarah Island, establishing yet another terrible place, complete with daily punishments and solitary confinement.  Welcome to Port Arthur!  Once this colony was ready to use, Sarah Island was dismantled and closed down. 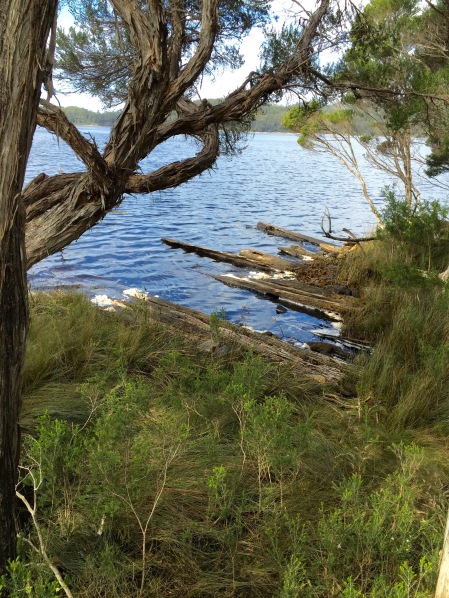 The slipway they used to get the ships into the water

They built 160 ships on that island and the 161st ship was built with a My Hoy and a skeleton crew of convicts.  When it was finished, the convicts, who were bound for Hobart or Port Arthur decided to mutiny and take over the ship and they sailed it half way around the world to Chile!

There is a whole performance, in conjunction with Round Earth Productions dedicated to “The Ship That Never Was” – the Frederick, the ship that the convicts stole.  It’s held, conveniently, right next to where you get on and off the boat.  The play has been running for 20 years and was well worth it.  They included the kids, they were what I like to call ‘muppet hilarious’ where they slip in adult jokes whilst entertaining the kiddies.  There was a fair bit of audience participation of which we were not subjected, but there was an audience of good sports who got involved. 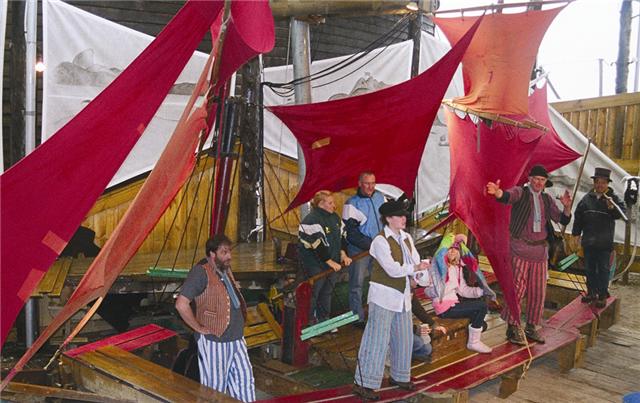 Look how gorgeous this day was!

On the boat we thought there were a few people that we would have liked to leave on Sarah Island…….

These people came and sat in an area that they weren’t meant to be, he rolled up his trousers and she proceeded to rub a dencorub like cream into his lower legs!  It stank – as dencorub does and there wasn’t one bit of concern for the people around them – none!

Anyway….. after Sarah Island our skipper showed us the fish farms….. 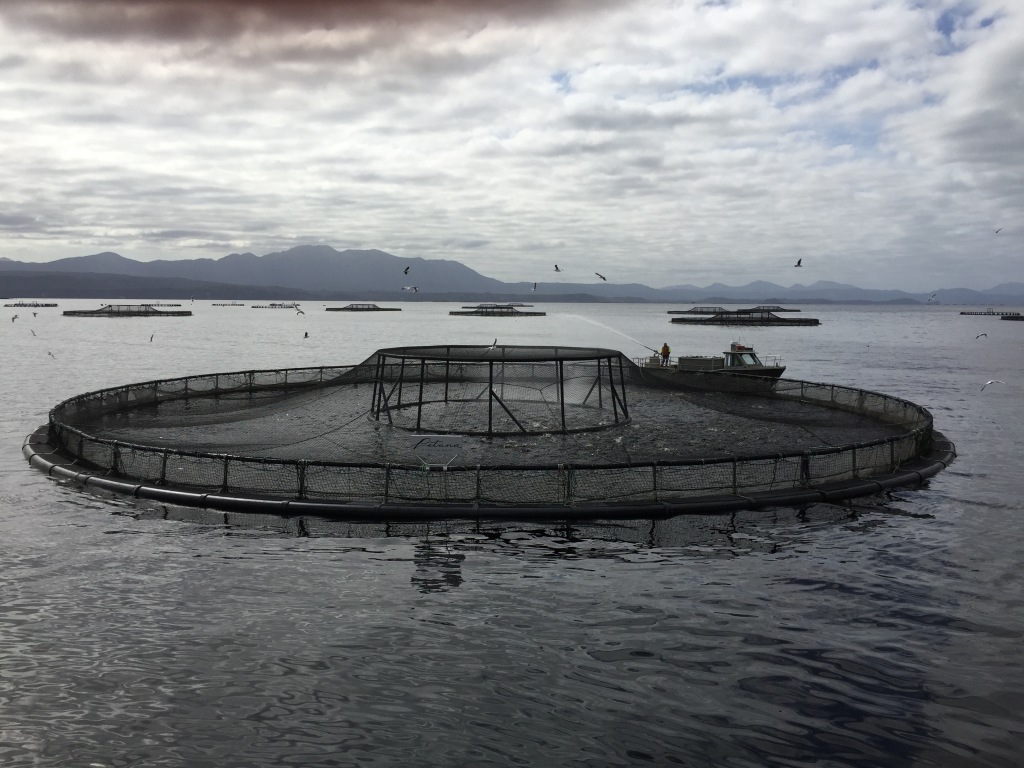 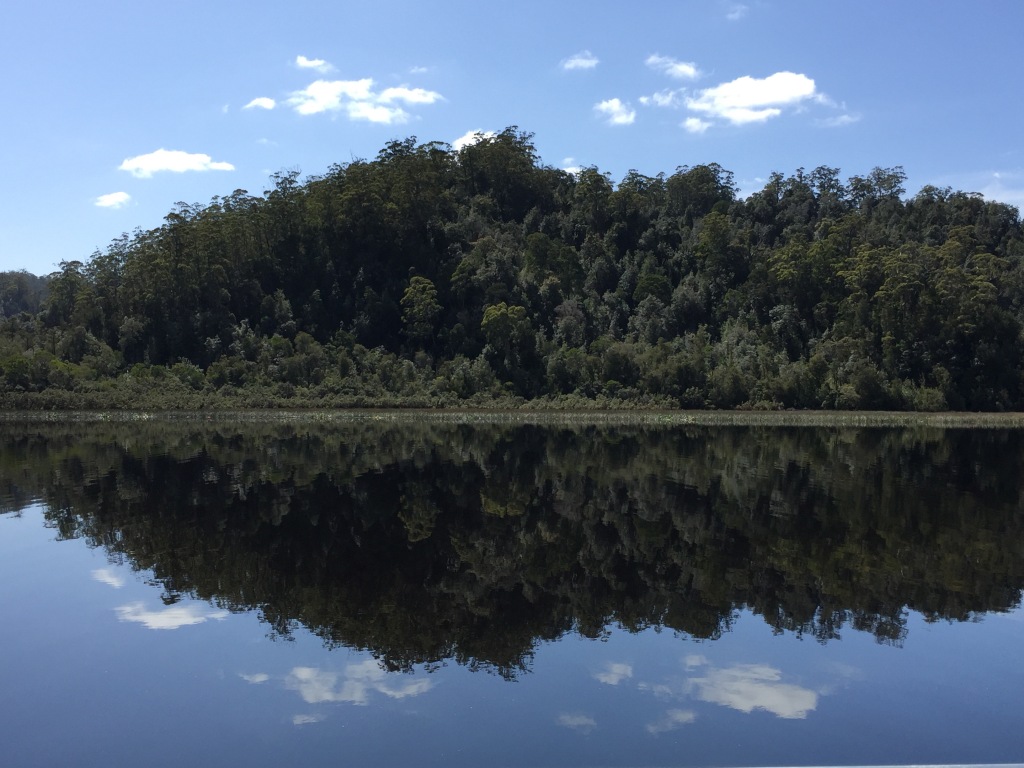 It’s all about the reflections

Here’s an interesting fact:  Because the Gordon River is fresh water and lined with button plants which releases a tea-like tannin, the water is a murky, tea-like colour.  When you go out into the harbour the water is mixed with clear salt water, but because the fresh water is lighter than the salt water it sits on the top.  When boats move though it, it churns it up and makes it brown. 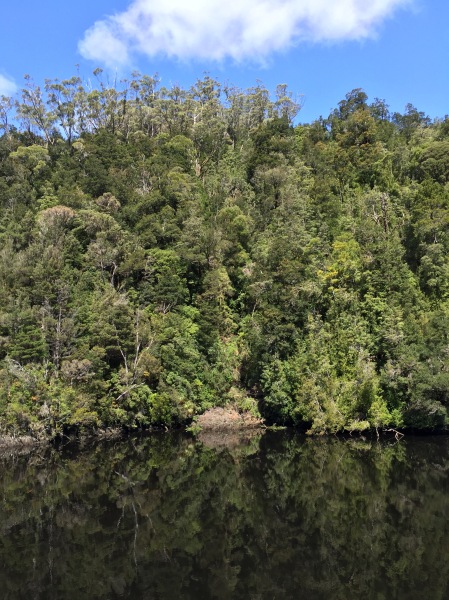 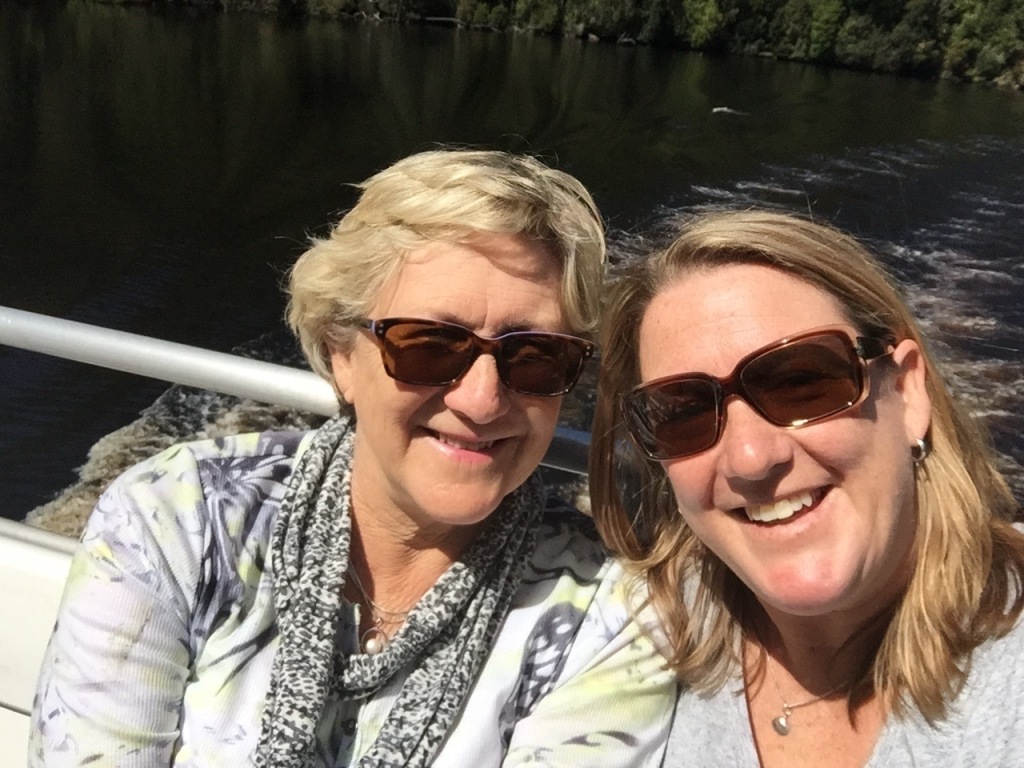 Some ladies enjoying the sunshine

Jenny has spotted the elusive Huon.

This poor family behind Jenny.  The kiddy was obviously bored silly on the 7 hour tour that wasn’t designed for small children and where he was stuck on a boat with no opportunity to run around – even when we got off the boat he had to stick to the paths, so he whinged all day and the dad had to follow him chase him and hold onto him all day.

I’m not sure why people do it to themselves?

A super interesting day was had by Me Jenny and me – sure, not so interesting for the kid, but that’s not my business.  I’m becoming more and more fascinated by Australian history and Tassie has it in spades!

We can definitely recommend the Gordon River Tour if ever you’re in Strahan.