A lovely couple in the caravan park had posted signs all over the park advertising a craft sale today between 8.30am and 1pm.  Jen and I were super excited as we love a good bit of craft.  So down we wandered with our expectations held way down low, expecting to see some knitted booties or perhaps a crocheted tea cosy (both fabulous items, just not in our realm of  want or need)

We arrived to a semi professional stall with tables and items wrapped neatly in plastic  – and all very reasonably priced.  We purchased a caravan motif hand towel that hangs over the oven rail, a lovely little bag, a couple of bookmarks and this caddy bag that fits thusly onto Colin’s Luggie through the wonders of Velcro!  That couple made a killing today! 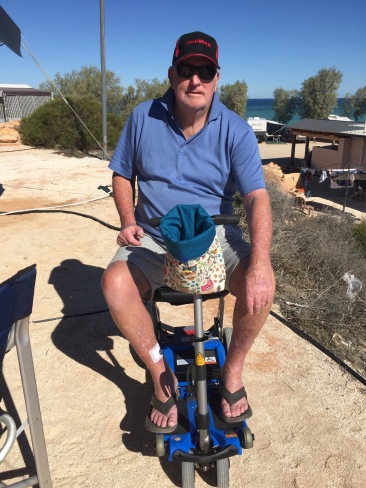 Col has a few issues with his back, (if you ask him, he’ll tell you all about it) so to get around, especially when we’re going long distances, he pops himself onto his “Luggie” and speeds along the footpath at walking pace.  Otherwise he’d be back in the van on his own and that’s no fun.

This year is the 400th anniversary of Dirk Hartog landing on Dirk Hartog Island.  What are the odds of landing on an island that has the same name as yourself?  I jest people, I jest…  It was named after him after he landed his Dutch trading ship at Cape Inscription (now known as DHI).  Apparently Dirk was the first recorded white man to set foot on Australian soil.  He stepped off the ship and nailed a pewter plate onto a post.

However there have been claims by the French that they were in fact the first people to land there and showed an example of French coins in a bottle that were buried at the tip of the island, so about 15 years ago some chaps we know went on an expedition to Dirk Hartog Island using an ancient map to try and find said bottle and coins – and found it!

Maybe Dirk saw the bottles, threw them into the bush and nailed his plate, pretending that he hadn’t seen anything?  Maybe they were buried really well and he was none the wiser?  So it turns out that it wasn’t actually Dirk who was the first to discover the island.  Shark Bay are still going to have a festival though to celebrate 400 years since some bloke littered our beautiful coast line with his pewter plate; and they are going all out.  The foreshore has been dug up and there are cranes and heavy machinery all over the place.  It only takes a little away from the serenity.

Denham seems like a lovely little town to stop and unwind.  There’s not a huge amount to do here except fish, but there are people who come up here for months at a time because the weather is glorious and there’s all the time in the world to do nothing – perfect! 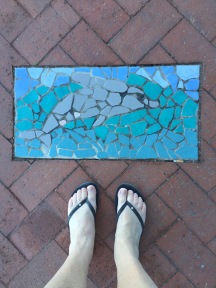 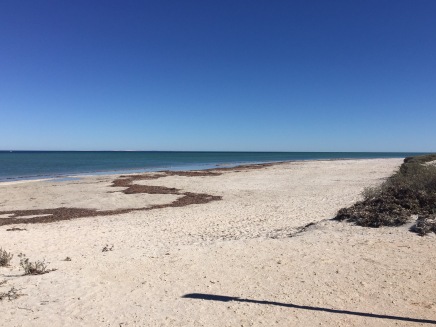 Just outside of Denham in Hamelin Bay, there is a beach full of tiny shells – called, strangely enough, Shell Beach… 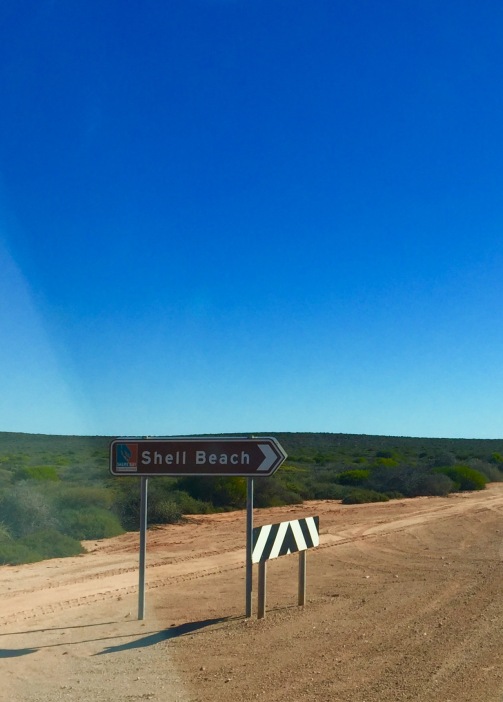 The shell is so jam packed it goes down as far as about 9 metres.  It was quarried and cut into shell blocks and then used to build most of the station homesteads.  This building is on the main street of Shark Bay and was built using the shell blocks as well.  It’s a fabulous insulator keeping the buildings cool in the summer and warm in the winter. 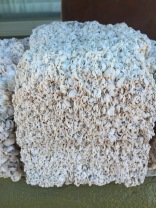 The foreshore is a big eyesore at the moment, but if you just look in one direction, you can pretend that it’s not happening… 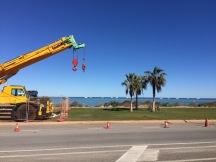 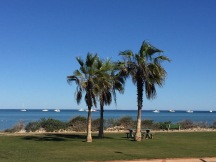 Since Colin has had his Luggie he has been consistently stopped by the ladies.  Today we weren’t sure if it was the Luggie that drew this lady in, Colin’s charm or perhaps the crafted pouch we purchased this morning?  Who knew the Luggie would be such a chick magnet?  However, on second glance at the photo – the lady is looking away…… 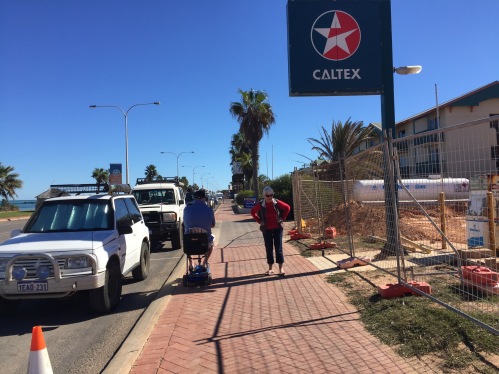 So this is pretty much our view if I walk down a small hill – look at the colour of this water!

The only trouble is that – everybody else had the same idea…..