Fliss’ nephew, Angus and his girlfriend, Rachel have been travelling in Europe for about 6 weeks and they were going to be in Barcelona on the same night we were there, so we joined up with them for drinks and a spot of tapas.

It was so lovely to see these two lovely young peeps and great to hear all about the way the young kids travel nowadays with hostels and shared bathrooms to Air B&B’s  – it’s all a bit different to how us oldies do it now!

I thought we’d got our Gaudi on yesterday, but apparently I was wrong – Here’s day 2 of the Gaudi festival. 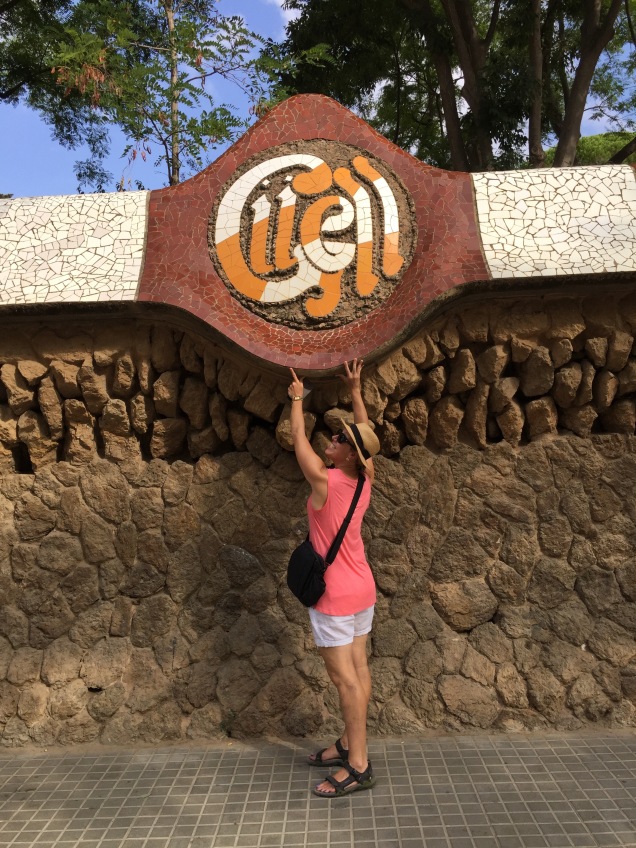 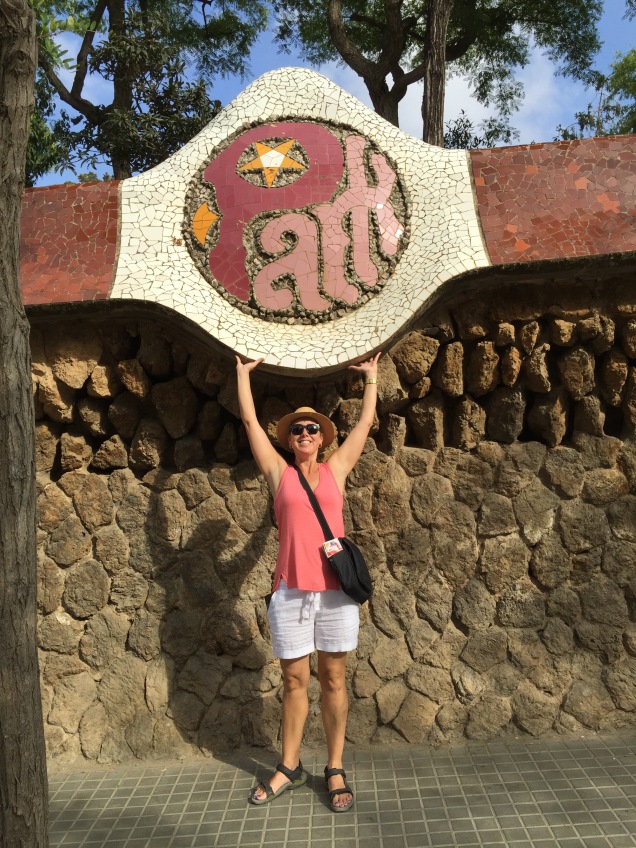 We made our way up to Gruell Park which was designed by Gaudi and she was a mosaic picnic!

The pillars are all at different angles to help keep the structure up.  This particular area was originally supposed to be a market place, but only a couple of areas were sold/leased and so the market never got off the ground and was considered a failure.  They had built 3 houses in the area, that the market was meant to service, but when it closed – due to failure, they stopped work on the residential houses as well.  Now it’s a lovely park that is open to the public.

This is a mosaic on the ceiling.

This is Gaudi’s residential house. 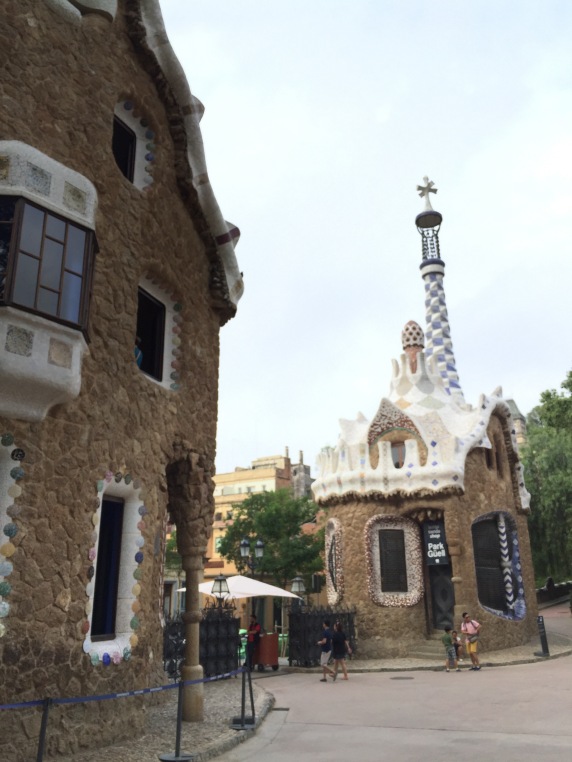 The market place from the top of Gaudi’s house – you can see the flat open park area at the top that is surrounded by Gaudi’s mosaic seating.

Just one of the many lovely mosaic tiles on the walls.

Fliss and I were taking the obligatory selfie with Barcelona behind us….. 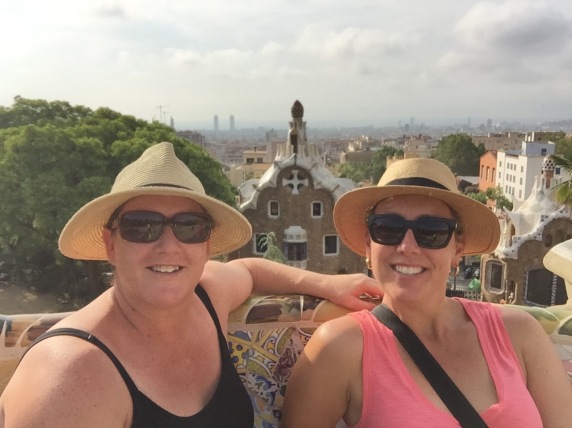 …when this girl came and sat down beside us – and posed really naturally – like this…  We watched her move around the park and pose the same way in each photo.  I guess that’s her best side?

So, as you can see the seat has coloured, intricate mosaic tiles all the way around…

Until you get to one end…. 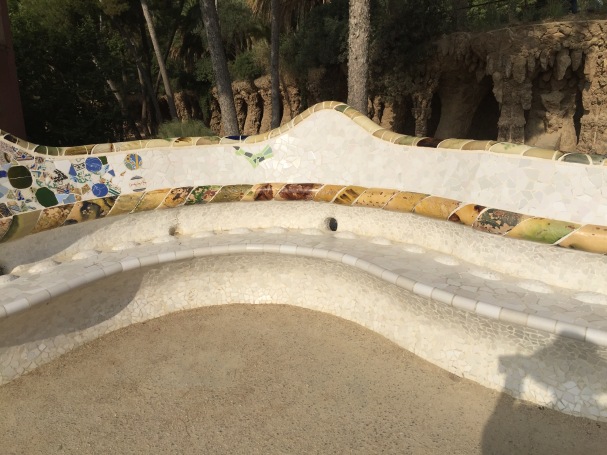 Then I think somebody just got a little bit bored… either that or they ran our of coloured tiles. 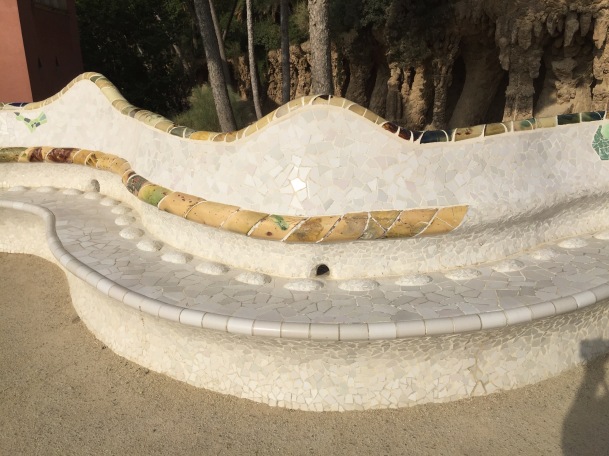 We jumped on the hop on/hop off bus and headed back into the centre of town.  The plan was to head down to La Boqueria Markets, just off Las Ramblas.

But when we got there – naturally if was closed of a Sunday.  Fliss was not happy Jan!

It was obviously not our day as we tried to book online tickets for the Picasso gallery,  but there was none to be found – again, not happy Jan!  but we walked down there anyway just to see if maybe we could get tickets at the door….. there were 2 massive lines of people trying to get in so I went to the lady who was in the middle of both lines, directing the traffic to ask what they story was and she got confused and told me to stand right there – at the front of the line.  I felt a tiny bit bad, but then she started moving the people from one line into the front of me and the people who now hated me in our line – trying to make one big line.  We thought we were going to be waiting there for hours, but then the line moved really quickly and we got in!

So our last night in Barcelona, we were determined to find some more delicious tapas and walked out of our hotel and turned left. 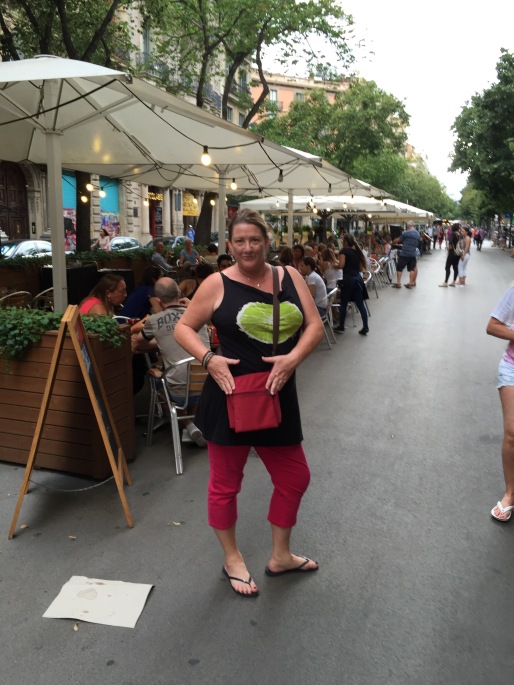 Me with my small little purchase.

We came across an entire strip of restaurants – one being a place that had been recommended to us, however she was full and had a waiting list, so we simply walked two doors down where this was hanging in the window…

… and here we enjoyed some of the best food we’ve ever eaten – ever (and Felicity is a chef!!!)

A fabulous way to end our last night in Barthelona!