But first things first – It was my job this morning to get Archie off to day care and luckily he knew the way (it’s only 3 blocks away, and he’s only 3.5 years old) and my second job was to make our lunch… you can always purchase food at events like this, but I have no patience for waiting in line for overpriced event fare.  So I put together a picnic feast. 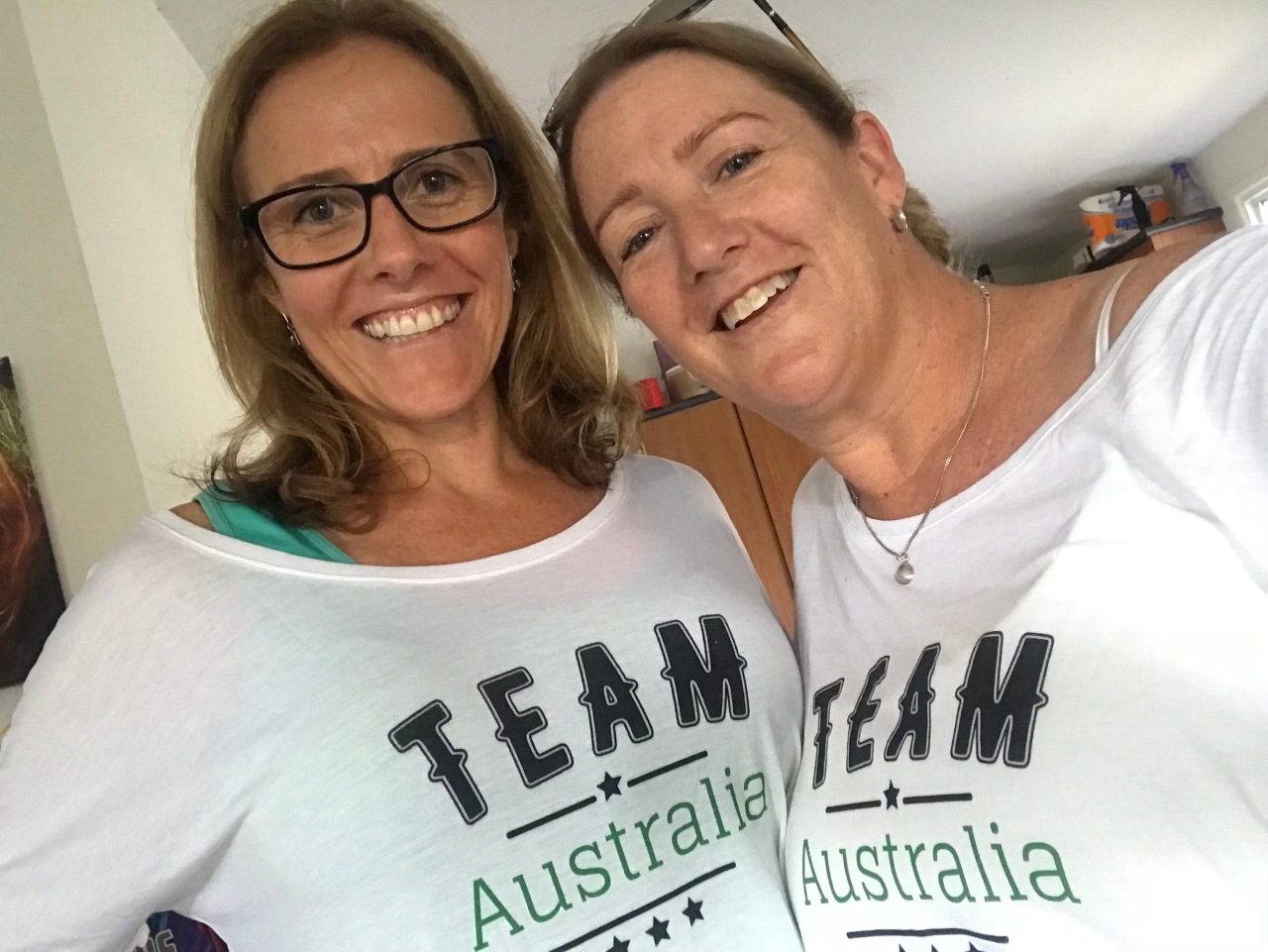 Madds got home from work and we donned our “Games” T-shirts and made our way to the train station – parking as the train pulled into the station on the farthest platform from where we were standing….. we legged it up the stairs, across the overpass and down the other side just as the train pulled away.

My life motto is usually “Never chase trains or men cause they’ll always leave you behind.”  I should have taken my own advice!  We only had to wait about half an hour for the next train and then we settled in for the 1hr 40min journey to Coomera Station.

As we were nearing the end of the line I noticed the sky had turned an ominous shade of grey and noted to Madds that I wasn’t too happy about their hue and with that, the doors opened, as did the sky and I’m not talking a few drops – it absolutely poured!  We jumped down onto the platform and into the station where we joined the masses waiting for the shuttle buses to the venue. 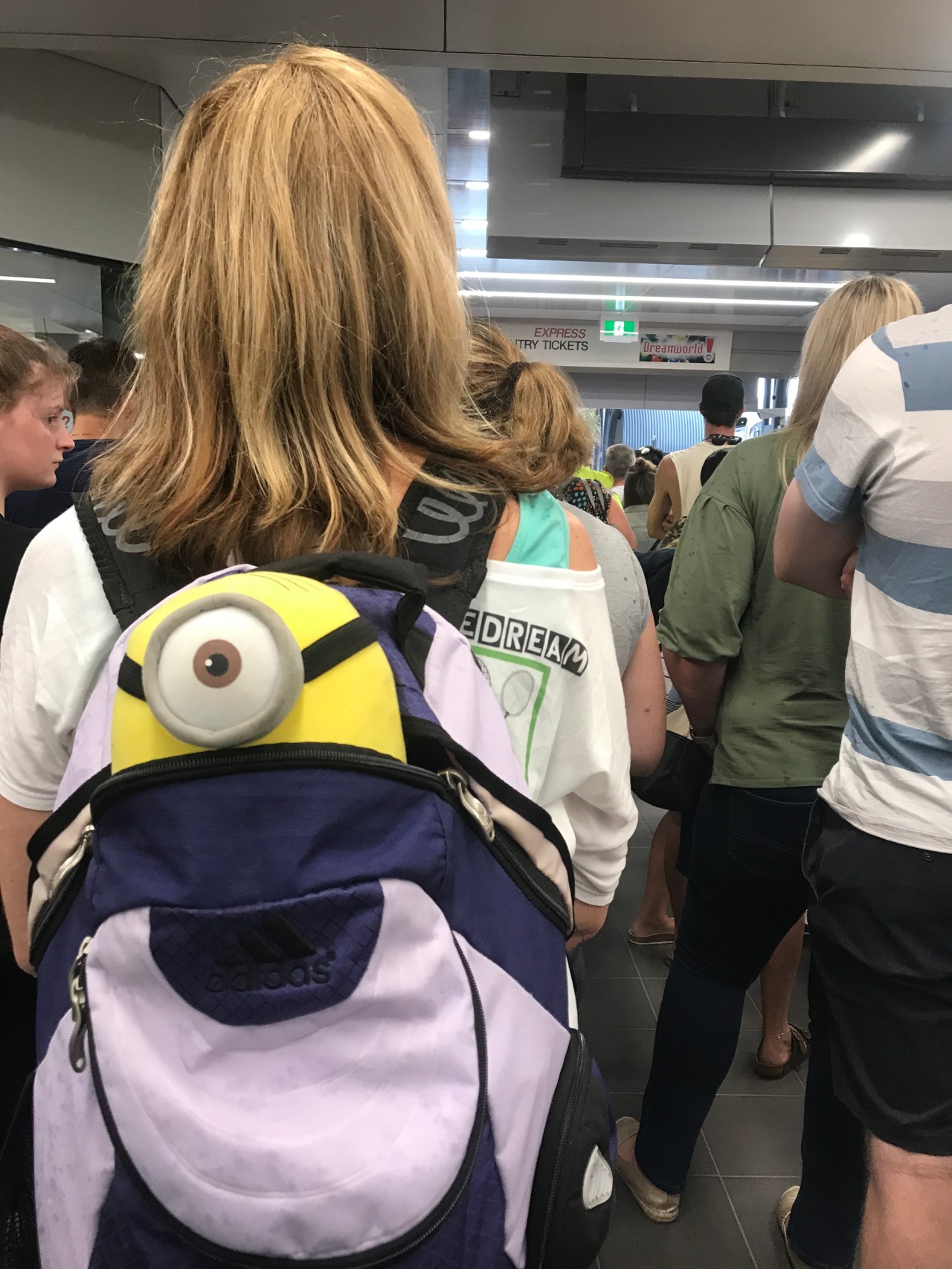 As we stood in the line waiting the bus the temp all of a sudden dropped and I began to rethink my choice of shorts and birkies. 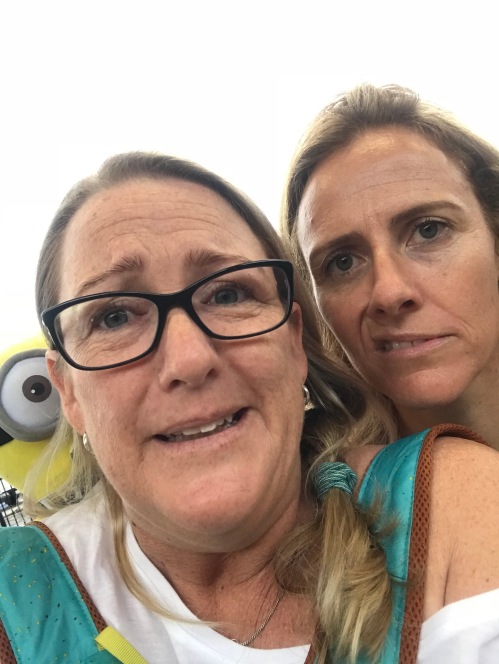 It really didn’t take too long at all, in fact even with the missed train – our timing couldn’t have been more perfect!  The bus shuttled us to ‘near’ the venue (read: you need to walk for about 10 mins) luckily it had stopped raining by the time we got there and as we got closer to the front entrance – a solid line of people started to form as they made their way through the back and forth gated laneways into security.

There had been talk of entertainment outside of the venues….

This chap made his way to us and stopped for a photo – now, I can’t be sure what has happened when he squatted a little to be in the picture – that’s either part of his tail or quite a large pair of roo doogs – I’ll let you be the judge.

Because of the massive downpour and the rain that the Goldy had been experiencing over the last week the ground was sodden.  They had tried to cover it up by putting plastic slabs over the wet grass and puddles, but as you trade on them, the water squeezed up through the air holes and plunged your feet into the murkiness.  People could be seen pacing up and back in the gated laneway with their dripping shoes in their hand – sure it was inconvenient to have wet feet for the remainder of the evening, but it was all part of the fun!

Once in there, we headed for Door 4 – right around the far side of the building, which, as luck would have it, had a set of clean and empty porta loos – Kenny would’ve been proud!

It think they were probably empty because the majority of people were lined up to buy food….. but not us!

We got in just as it was starting and had great seats. 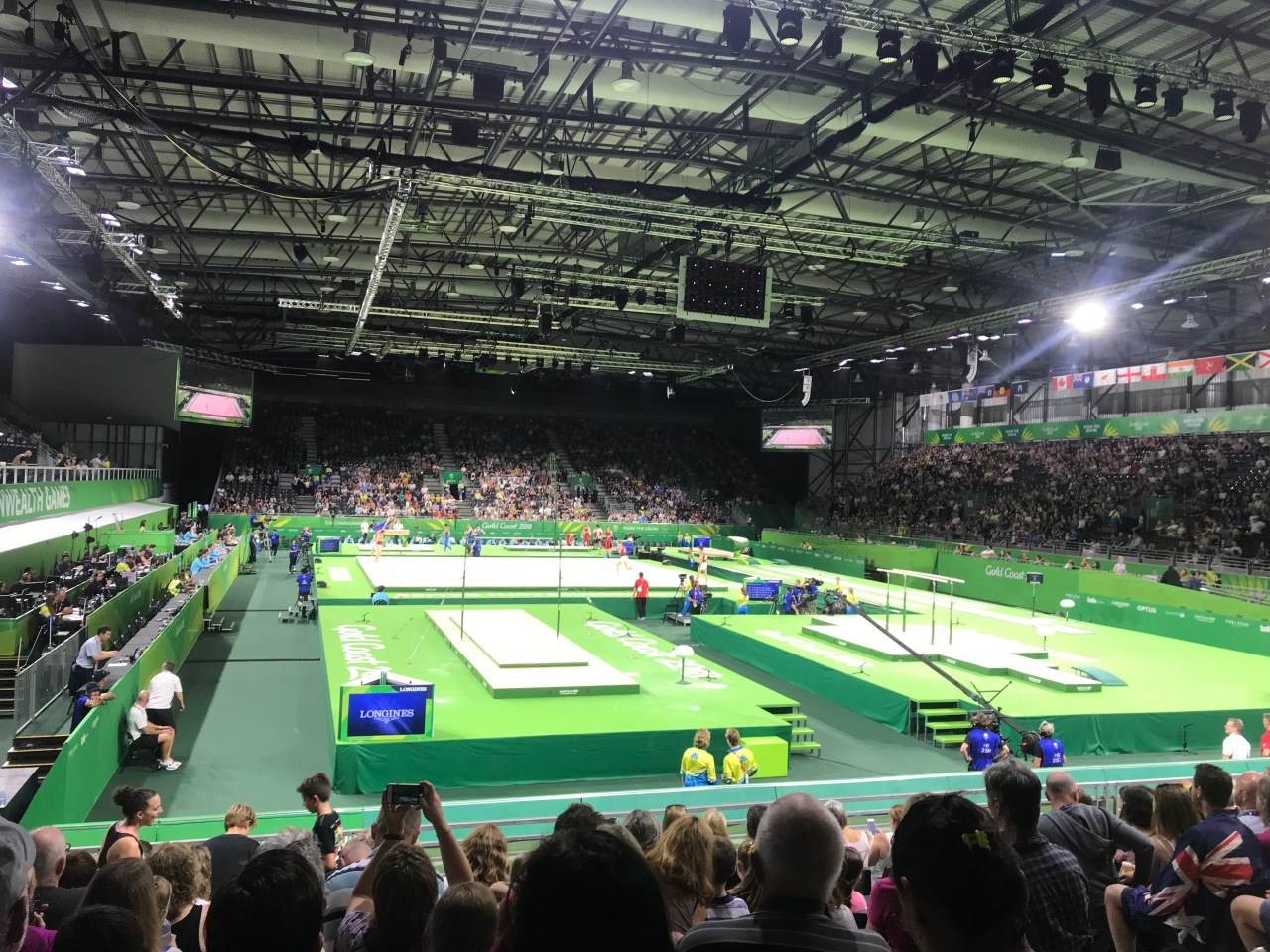 Our event was the Men’s Artistic Finals and the finalists were England, Scotland and Canada.  They rotated around the room on the different apparatus – we were closest to the high bar and the parallel bars. 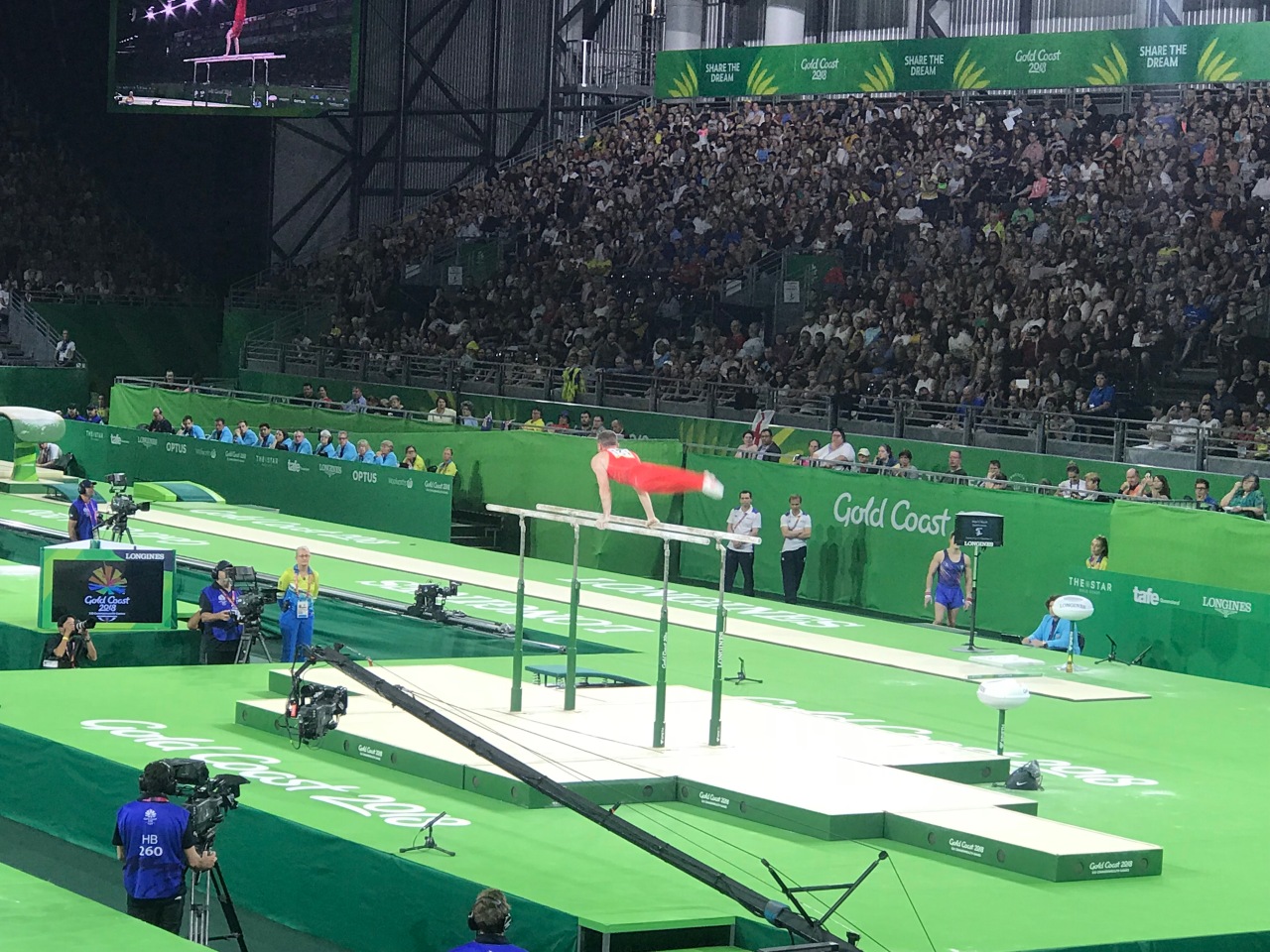 Most of the athletes were either horizontal…. or upside down. 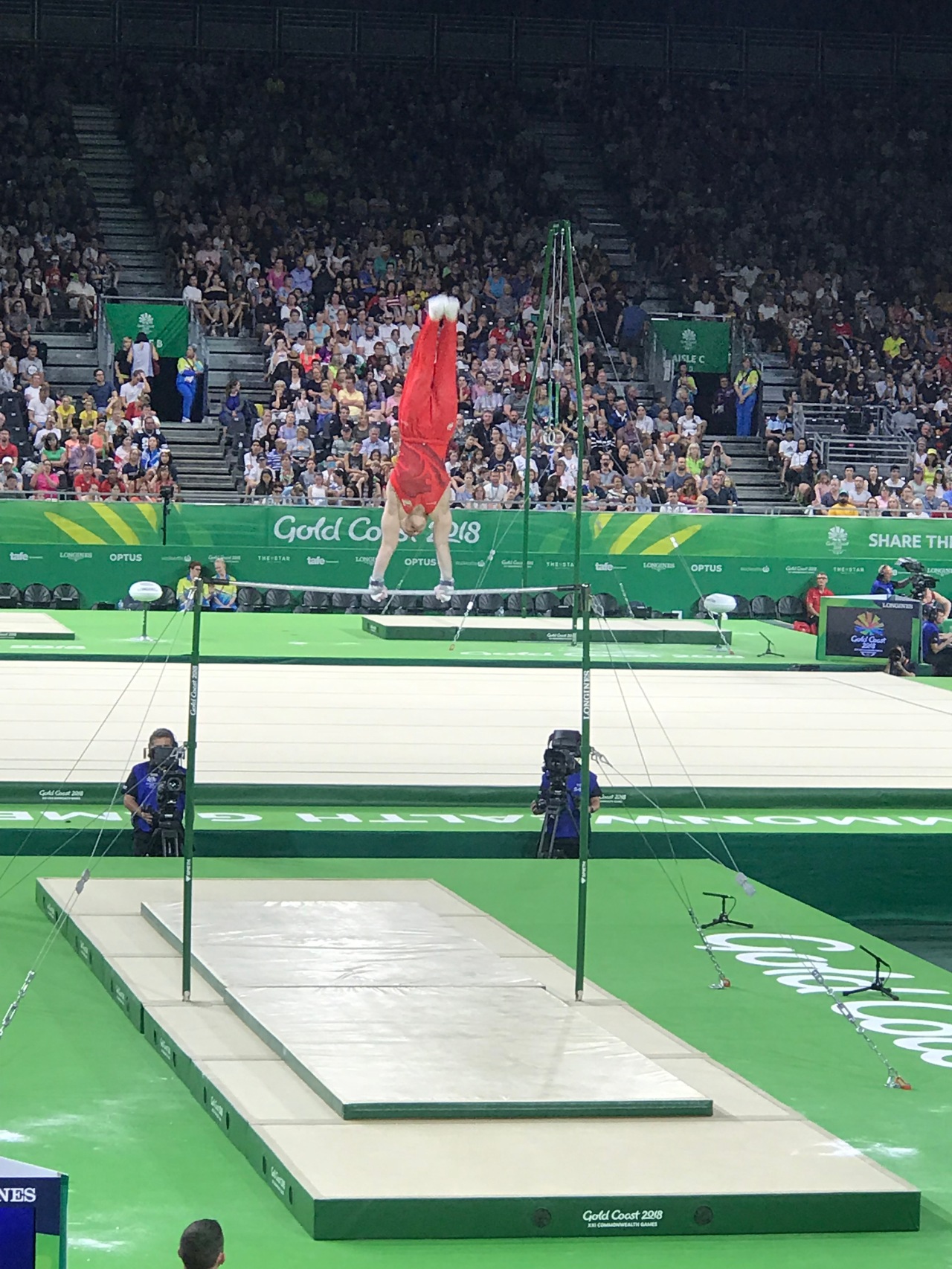 We noticed that they all had their own personal bag of powder and their own bottle of Capilano’s honey!  Apparently they rub the honey on their hands before plunging them into the bag of powder which helps it stick I assume.

We got to know each of the athletes pretty well during our time – especially the ones who were doing really well.  This is Nile Wilson from England.  He did extremely well – in fact he topped the individual points score across all the apparatus.  He looks pretty chuffed with his efforts here – and rightly so! 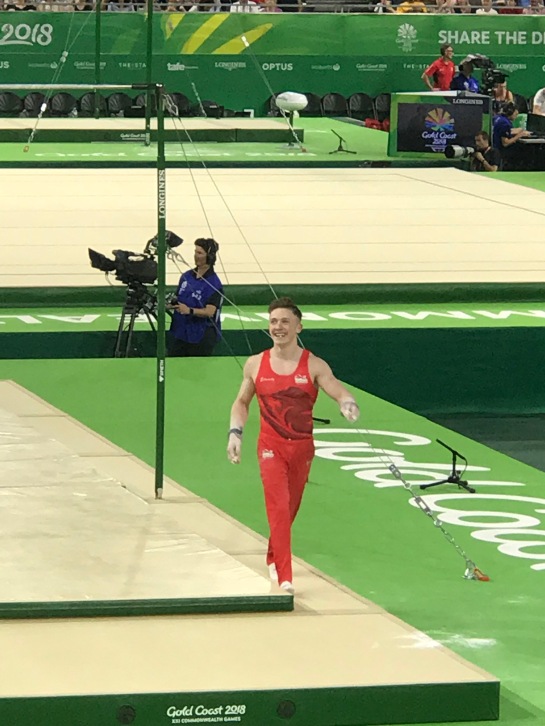 His teammates tried to congratulate him but he was like, “Could you move your head, I want to see my score.”

There were 3 lots of judges that moved around the room at each rotation so they could be in front of the correct apparatus (shall I say apparatus again?)  I did wonder how one became a judge as there were plenty of judges that didn’t look like they had ever been gymnasts before….. perhaps they were simply good at being picky.  Madds and I certainly could be judges after watching this session.  By the end we were able to predict the score they would get and did our own commentary on each performance, like the experts we are. 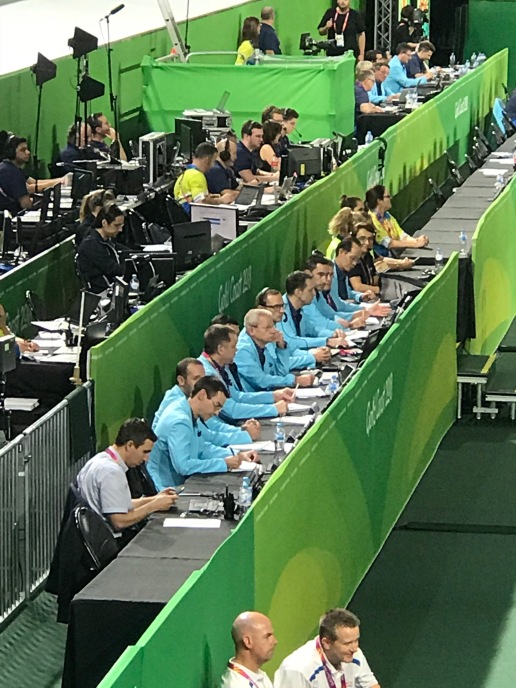 So in the end England were just too good and took out the Gold.

Scotland went away with a respectable Bronze.

With that the stadium started to empty before the lads stepped down off the podium and we were out of there – hightailing it back to the shuttle buses to catch the earlier train.

Everyone was in good spirits and the ladies who were organising the buses were fantastic – which meant that we got our bus which got us to the station in time to step onto our train and then the peaceful 1.5hr journey home. 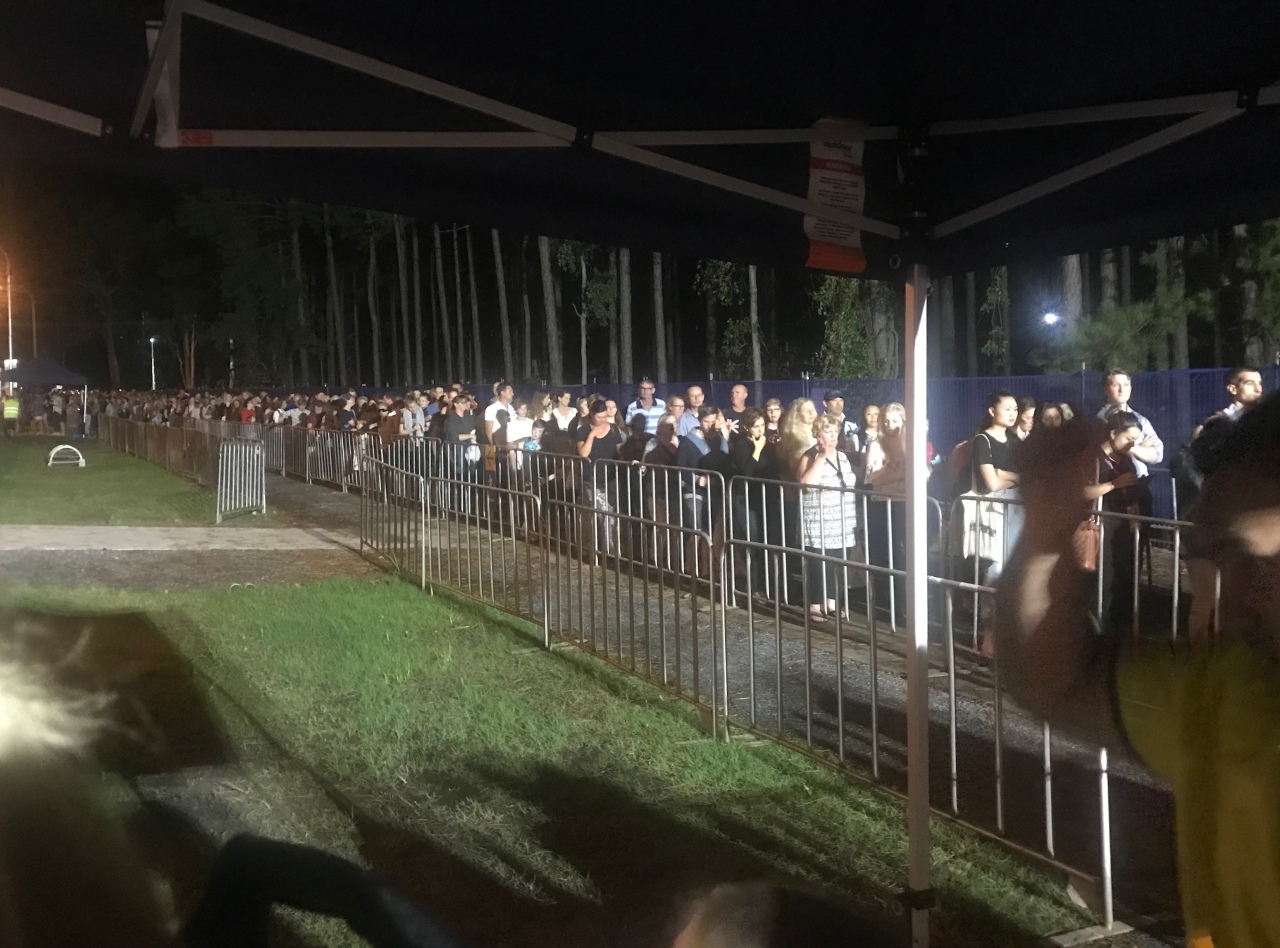 And that’s good night from me….. cause we’re going to get up in the morning and do it all again.  Tomorrow is badminton.

Here’s a fun fact that you might not know about me…. in 1978 I was the under 8 girls runner up champion in the local Geraldton badminton competition.  There was at least 4 girls in it.  So I’m hoping that I can learn some tips to help me see where I might have gone wrong all those years ago and maybe dig out the pink pom pom socks and baddy racquet again to defend my runner upness.