Today is the last day of the Games for me and I’m flying solo.  My Team Aus buddies had to head back to Victoria for a family matter, so the journey down to the Gold Coast wasn’t nearly as exciting…. there also wasn’t as many people on the train or at the station or on the shuttle bus – it was like the Games had finished for everybody…. but when I got to the GC Convention Centre, where the netball was being played…. I found everybody.

A lovely lady called Leanne, but we call her Wesley-Anne (where’s Leanne? Get it?) was able to take the tickets at the last minute when my team realised that they would have to pull out of the event.

Wes and I used to work together in Melbourne and we are 2/3s of a girl band called “Sharalea” with our lovely friend Sarah.  We didn’t play any gigs as such, but we did come up with a number of song titles over Friday night drinks.  And we made our own band t-shirt – so we were totally legit.

So Leanne now lives on the Gold Coast and had her Mum, Joy and niece, Sally staying during the Games and they gladly took the tickets.  So great for me to have some companions but also to catch up with Wes.

Today’s schedule was terribly exciting.  We saw 2 games – the first two teams were vying for 7th & 8th place and the other two were battling it out for 11th & 12th – so the excitement level gave us a lot of time to catch up.

For some random reason Anna Meares was there – she walked the game ball out onto the court.

And these were our seats.  The centre was absolutely freezing, so by half time of game two we’d all had enough and Joy needed to thaw out.

Joy is a spritely lady, but has a bit of trouble walking long distances, so we borrowed a wheelchair and let me tell you – it was great for getting to the front of lines and through special entrances!  Settle down – I wouldn’t try to exploit this unnecessarily…. but when the opportunity arises… 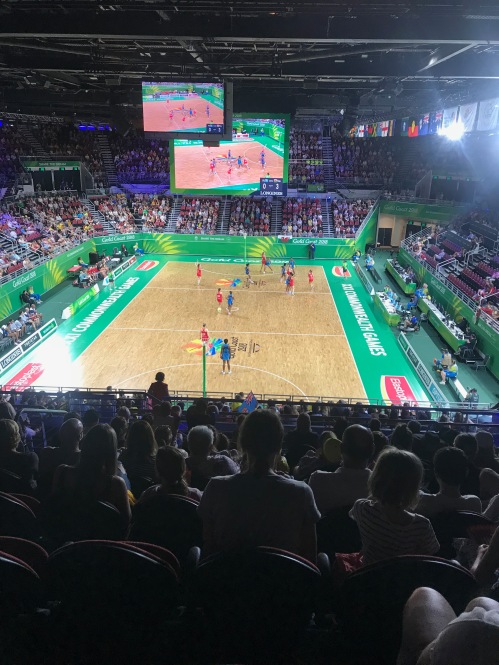 After the game we headed into Broadbeach for a quick drink and a people watch, where Joy accosted a lady with a dog in a pram and swiftly swept him up for a cuddle.  He was happy to oblige.

I also found out that Joy was a champion diver in her day – she was great the 3 metre board, but would have loved to try the higher boards, but the Chiltern Aquatic Centre didn’t have one.  She is also quite adept at the lawn bowls…. so this is my brush with athletic fame today.

Then just like that… after 2.5 hours on the train home – that was it.

The Games was over. 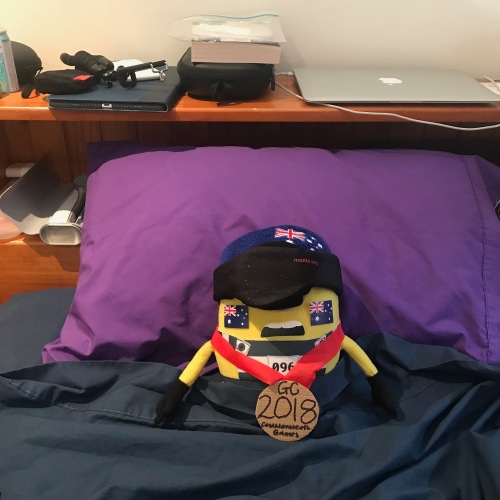