Tonight is all about the Athletics – track and field….. a little like country and western – you either love it or your hate it, but you can’t have one without the other.

We were all geared up and kept ourselves amused for the journey back down to the Gold Coast. 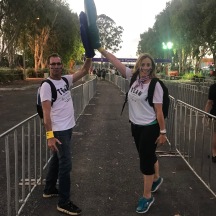 There were practice OWAF jumps all over the place while we waiting for Rob’s mate Tammy to join us.

And a bit of fun with the vollies….. they love a high five!

Let me just take you back briefly to the 2012 London Olympic Games where Madds and I (along with our “Livin’ the Dream” companions Lu & Vinnie) saw our good mate Usain win the gold – so you could say that we are pretty spoilt for track and field viewing….. but just wait until you hear what we got to see at the 2018 Brisbane Comm Games! 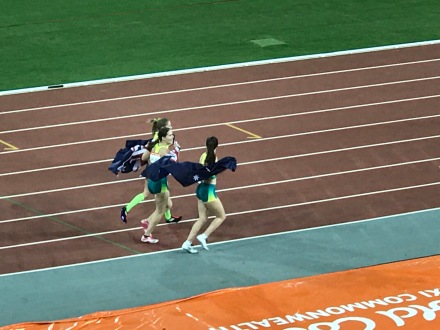 * the woman’s steeplechase – why you’d want to run around the track with wet feet is beyond me – there were a couple of Aussies in there who won participations awards. 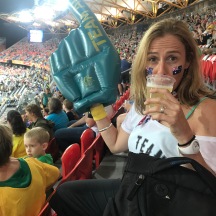 There was a great crowd and we even managed a Mexican wave….

We took a little pair of binoculars this time and we tried hard to spot if our good mate Usain was there watching…. we’d read that he had flown into Brisbane that morning, so he was bound to show himself.

What about that guy?  Both possibilities!

But so we can be really sure we enlisted the help of the chap in front of us who had a massive zoom lens…. he also happened to be 400m relay 2014 Comm Games (Scotland) champ Graig Burns!!!!  Not only a famous athlete, but he was also 1 half of the first same sex marriage in Australia on the 9th of Jan – they got married at midnight…. you might have seen them on A Current Affair or in New Idea or something.  What you wouldn’t have seen in New Idea though is this couple in the top right photo bombing and the man on the left ‘scratching’ his nose.  So Craig zoomed around the stadium to see if he could find him, but to no avail…. I heard later that he was probably at the netball watching the Jamaicans. 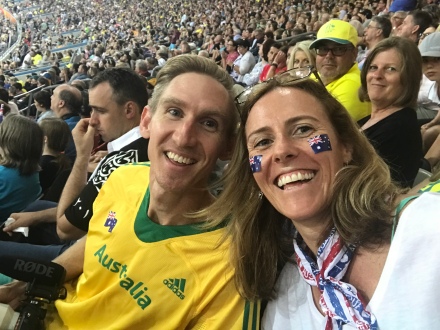 Team Australia had a new ring in member tonight in Rob’s mate, Tammy – she was a welcomed member and new everything about all the sports – so she came in very handy when a tricky question was bandied about that Craig couldn’t answer. 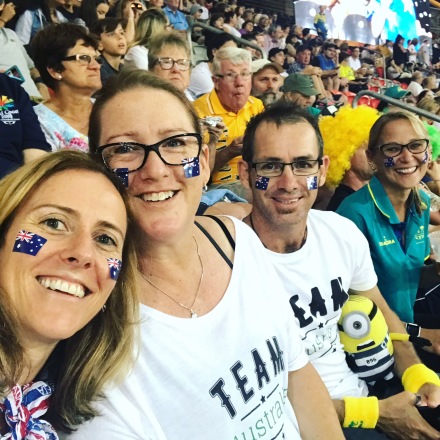 At the end of the session – after the last race 90% of the spectators stood up and headed for the doors….. there was still medal presentations and flag raises and anthems to be sung…. I felt bad for those medal winners who were going to come out to nobody!

But we stayed until the bitter end.  Yes it does look like I’m squeezing Tammy a little too hard here, but I can assure you she was fine. 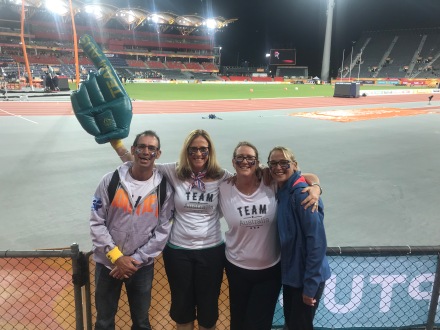 She waited for a break in security and jumped the fence to get a touch of the track…. but lost her nerve in the end, did a little dance and then jumped back over. 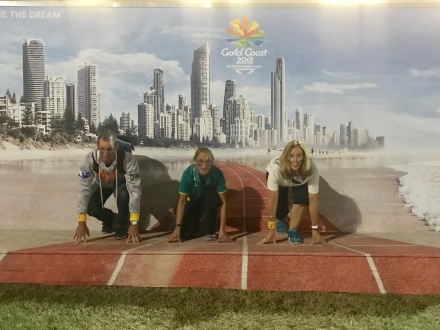 And it’s GOLD to Madds for the statue race. 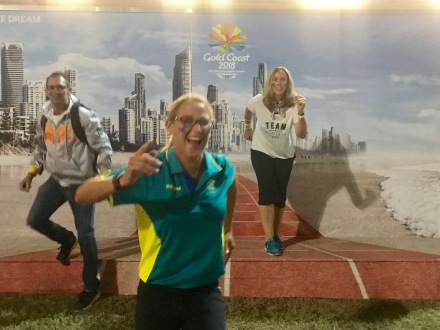 Another great Games sister….. let’s start planning the next one!