Just off Playa del Carmen is an island called “Cozumel” It’s quite a big island where cruise ships dock and people live and can stay.  The island offers lots in the way of water activities and has lovely beaches to swim and snorkel at etc…

Not wanting to go on any boat trips and not really interested in snorkelling limited the activity list somewhat, so we decided (on a few recommendations) to rent a car and drive around the island checking out all the beaches.

ML had read that one of the ferry lines had been the target of a recent attack (twice) and so much preferred to travel on the other line.  Ours was a slightly older, slower ferry, but peace of mind was worth it.

This chap is already raring to go!

After the 30 minute ferry ride across, we chose two friendly looking woman from the plethora of car touts blocking the exit from the ferry terminal.  We chose a small automatic car with air conditioning and were then walked a couple of blocks to the main office – which was a small room off the street. Flavio then did all the paperwork, answered a few personal calls and generally faffed about the office before showing us to the car.  It was already running when we got in and sounded ok as far as we were both concerned.  We waited for a massive bus to pass us, and side swipe the car parked just in front of us as it tried to turn a very sharp corner.  When the driver found that he couldn’t make the turn, he chucked her in reverse and the back corner of the bus scraped along the doors of the car it had just hit.  There was no kerfuffle at all, the owner of the car raced out of a building and just moved the car, but that was it!  We took off as soon as we could and found our way to the one main road that goes around the island pretty easily and were on our way.  On one side of the island – the one that faces the mainland there is one beach club after another.  The other side is where the free beaches are.  We decided that we’d like to check out a beach club, so we chugged along in our little (possibly stolen) car, the engine skipping every now and then and parked at one of the beach clubs that I’d read about.  You pay a fee and then you have access to the beach, beach loungers, floating, climbing things, kayaks, floating mats, a pool and bathroom facilities.  There’s also a bar and restaurant.  So we paid our money and went in.  We found a couple of loungers in the shade and went straight into the beautiful clear water for a swim.

The water definitely felt different to home – this was smooth and heavy and much saltier. 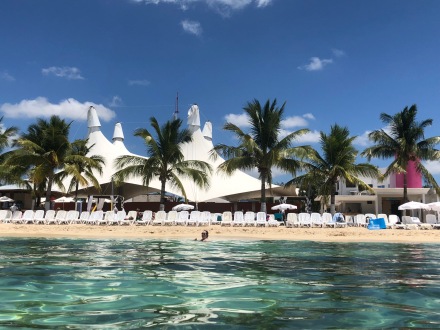 Here’s me doing my best Celeste Barber impersonation of her impersonating some of the ladies we’ve come across thus far…. the hand on the head is meant to be my fingers running through my hair – but as I’m super sun safety cautious, this will have to do.  I’m also enjoying the way the water is making my behind look like a caricature…. I don’t know why I don’t have a left arm.

The sky clouded over and the wind picked up making the beach less appealing and so we headed up to the pool for a quick dip before lunch.  Yes, she’s a small pool and yes, we were expecting bigger things, but it was perfect for a little dip – and we had it pretty much to ourselves. 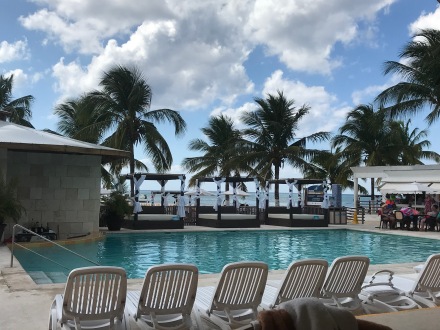 We changed out of our wet bathers for a comfortable lunch and then hopped into the hot car to scoot around the other side of the island for a look at the free beaches.  Thank you Kirta for our little prize – these have come in very handy on more than one occasion!

The car didn’t start first time and so I tried all sorts of tricks – waiting until the oil light goes off, fiddle with the steering wheel until the key turns, pump the accelerator, wind down the window (handle has no knob!) and eventually it started.  I’m not sure which of those strategies was the one that worked though….

One of the first places we stopped was this little beach.  The sea was rough, it was really windy and the shore and water were covered in seaweed and she was a wee bit smelly.  The colour of the water was beautiful though – so in less windy conditions, and at a different time of year when the weed isn’t abundant – this place would have been glorious.

It was a little bit reminiscent of Kalbarri in WA – not the smell, but the rocks.

There was a souvenir shop – of course… 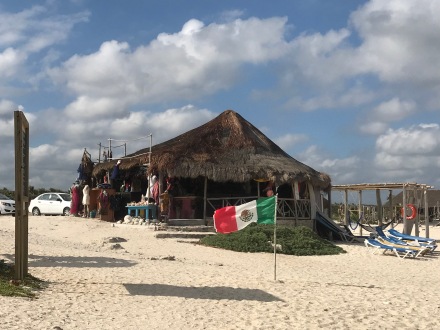 The car had another small attack of the “I don’t want to starts”, but after a few attempts we were good to go… Up the road a bit more, there was a beach where lots of people were swimming.  But not us – once you take wet bathers off – there’s no way they’re going back on!

This time when we stopped we were reluctant to stop the engine – just in case… but wanted to get out and have a look around, so had no other choice.  Starting it again took all our motor vehicle knowledge combined and after a few bangs and whacks, it started, but sounded like it needed me to pull out the choke – remember when you had to do that?  We spluttered all the way back to the office where Flavio was going to get a piece of my mind.  You’re probably thinking Flavio wouldn’t have cared too much, and you would  be right.  I told him his car was a pile of junk and not fit to be on the road and he said, quite rightly, “Why didn’t you bring it back or call me?” I retorted with, “Why did you rent it to me like that in the first place? – it’s obviously junk!” and with that we came to an impasse.  My suggestion is to those heading to Cozumel and are wanting to rent a car – either don’t go through this mob, or test it out first – this man in the helmet is not Flavio.

After that debacle we weren’t in the mood to pursue the numerous tourist stalls lining the street – all selling the exact same wares, so we passed by everything with a many “No, gracias” and headed straight for the ferry terminal and wait for the next ferry.

Once back on the mainland…. (See ya round Cozumel (can you see it in the background?)

We sauntered back down the main street to our hotel stopping for an ice-cream – I felt I needed a little pick me up.  We chose this stall, outside a tourist stop.  You choose your ice cream at the front, then the lady writes down what you had and hands you a piece of paper and you have to go to the very back of the store to pay for it.  At the back of the store there were two cashiers who are busy ringing up hundreds of souvenirs for customers, so we got to eat our ice-cream before it melted whilst lined up at the back of this shop.  We decided that if we finished the icecream before we got to pay, we’d just leave via the side door.  I can’t say it was the best system for the customer, but maybe it works for them? Their repeat customers can’t be plentiful.

We got back to our hotel to more towel art….

The we popped up to the mainy for dinner.

… and tacos (and it’s not even Tuesday!)

And… we were treated to a show of three blokes doing a breakdance/acrobatics performance.  I’ve just been to the Comm Games and these three guys could have well and truly competed in the “Freestyle” category, if there was one – they were amazing!