Today we were venturing south along the coast to a village called Tulum.  There are a couple of reasons why this was on our itinerary.  ML wanted to sit on the beach and sip a Blue Tulum cocktail (we’re not sure of the ingredients… but we’re assuming Blue Curacao is making a comeback from the early 90s!)

The other reason is that this is quite a big archaeological area and thought we’d best get us a bit of culture before leaving Mexico.

We chose to risk it again and hire a car as there was only one main road to really drive on and the signage on the main road is really good.  This time we asked at the hotel reception for a recommendation on car hire establishments.  Alejandra, the lovely lady behind the desk was drawing us a mud map to get to Hertz when Miguel, the porter stepped in and gave us a business card to Easy Car Hire – they weren’t a big name and we were being very cautious… but as we walked out of the door to head to Hertz 2 men walked in and then quickly followed us out.  Miguel had obviously pointed us out to them and they chased after us to tell us about their cars.  This turned out to be a fortuitous encounter because Eduardo, who was only on his 4th day of the job walked us up about 3 blocks to their lovely, clean and air conditioned office.  They were very professional and assured us that all their cars were brand new – which was true.

We chose this little Mitsubishi, which was tiny, but suited what we needed.  The price came in at exactly a 3rd of the price that we paid for the possibly stolen heap of junk on Cozumel – we won’t be fooled again.

The road to Tulum is about a 30 minute drive south in a straight line.  Driving on the right (wrong) side of the road is becoming second nature now – but I still need to remind myself when turning right that I don’t drift over to the left.  Not really knowing what to expect of our destination, we turned left at the sign, parked relatively easily and followed the crowd.  The archeological site is about an 800m walk away from the main section of markets and restaurants, so in 38+ degrees we chose to catch the tractor train. 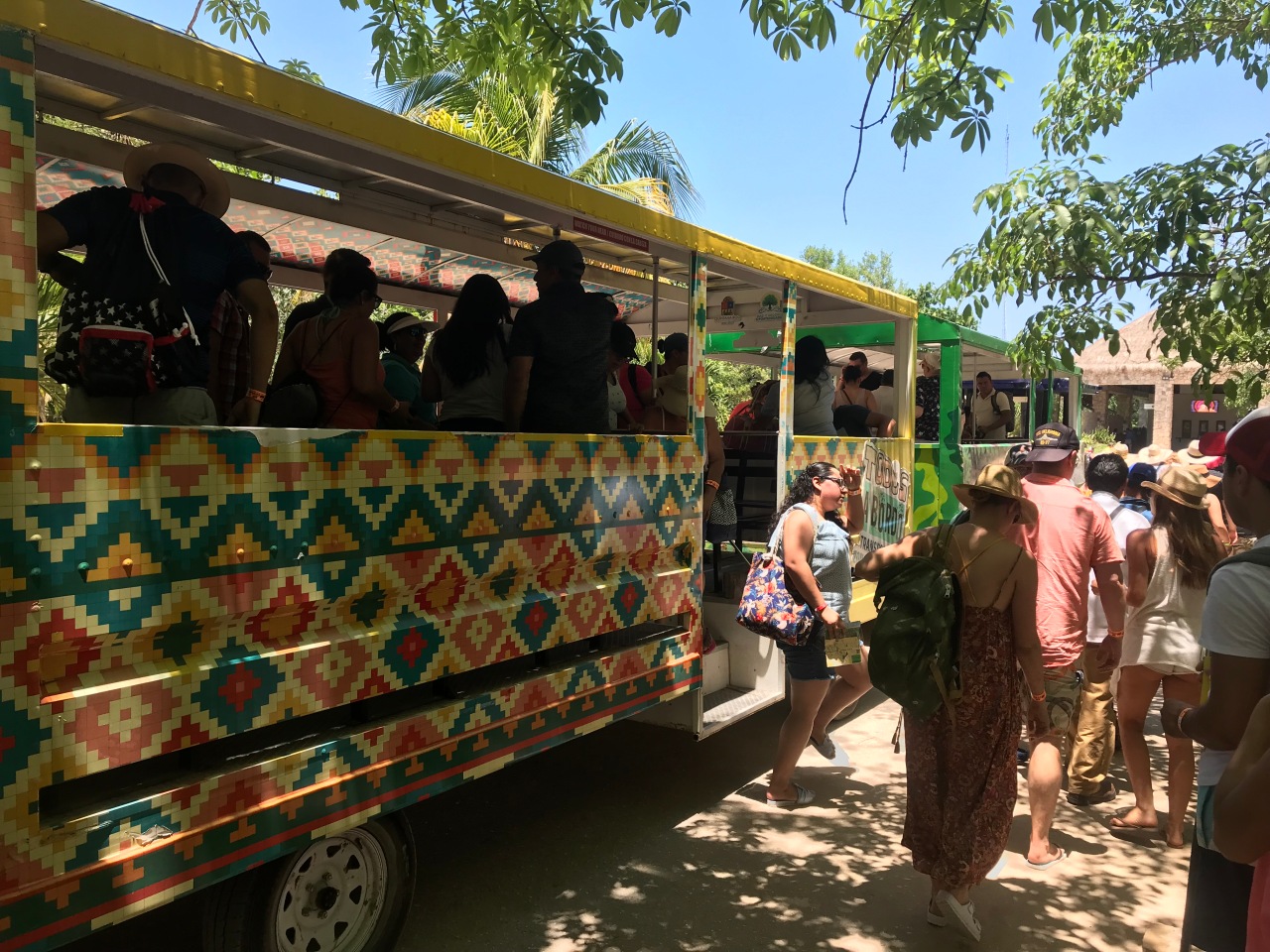 As always we brought the crowd with us, so with 98 of our closest friends we lined up at one small window to buy our tickets to enter the area.

Our transaction of “dos tickets por favor” took about 6 seconds, so I don’t know why other people took so long at the window.  Being the old ladies that we are, we dug out the fan and were the envy of many.

Ticket in hand we followed the path towards to sound of the Caribbean Sea.  The city of Tulum was also known as “Zama” (dawn) because it is one of the places where dawn first breaks in Mexico. 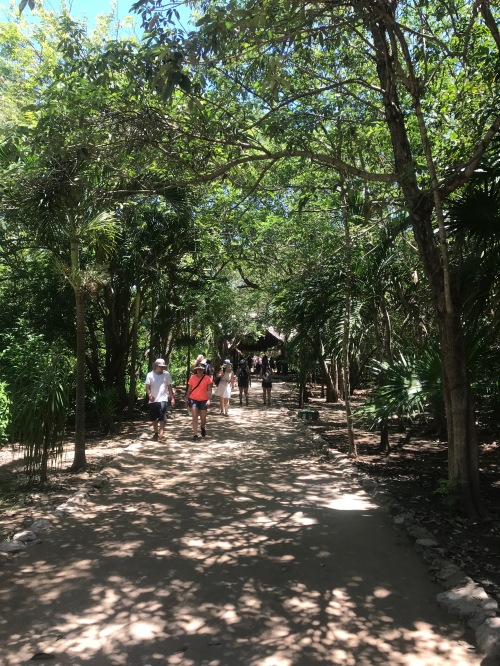 The place was full of these iguana type dragons which shouldn’t have been frightening, but they were!  Their ability to scarper at the speed of a racehorse is what freaks me out…. on doing a bit more research, there are some of these lizards that are called “Jesus Lizards” because of their ability to run on water! 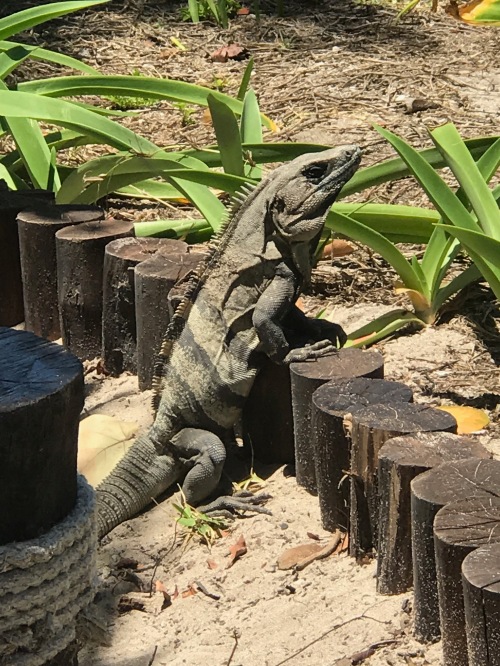 This area is also a nursery to the loggerhead & white turtles.  They are punctual without fail, every year between June and October they turn up and lay their eggs.  After many years and after travelling thousands of kms, those turtles who survived to reproductive age, return to where they were born to spawn and thus repeat what has happened year after year for centuries.  Also with all this seaweed, I’m not sure how they reached the nests!

So, in 38+ degrees how many ruined buildings is it acceptable to see before seeking the air-conditioning of a Starbucks? 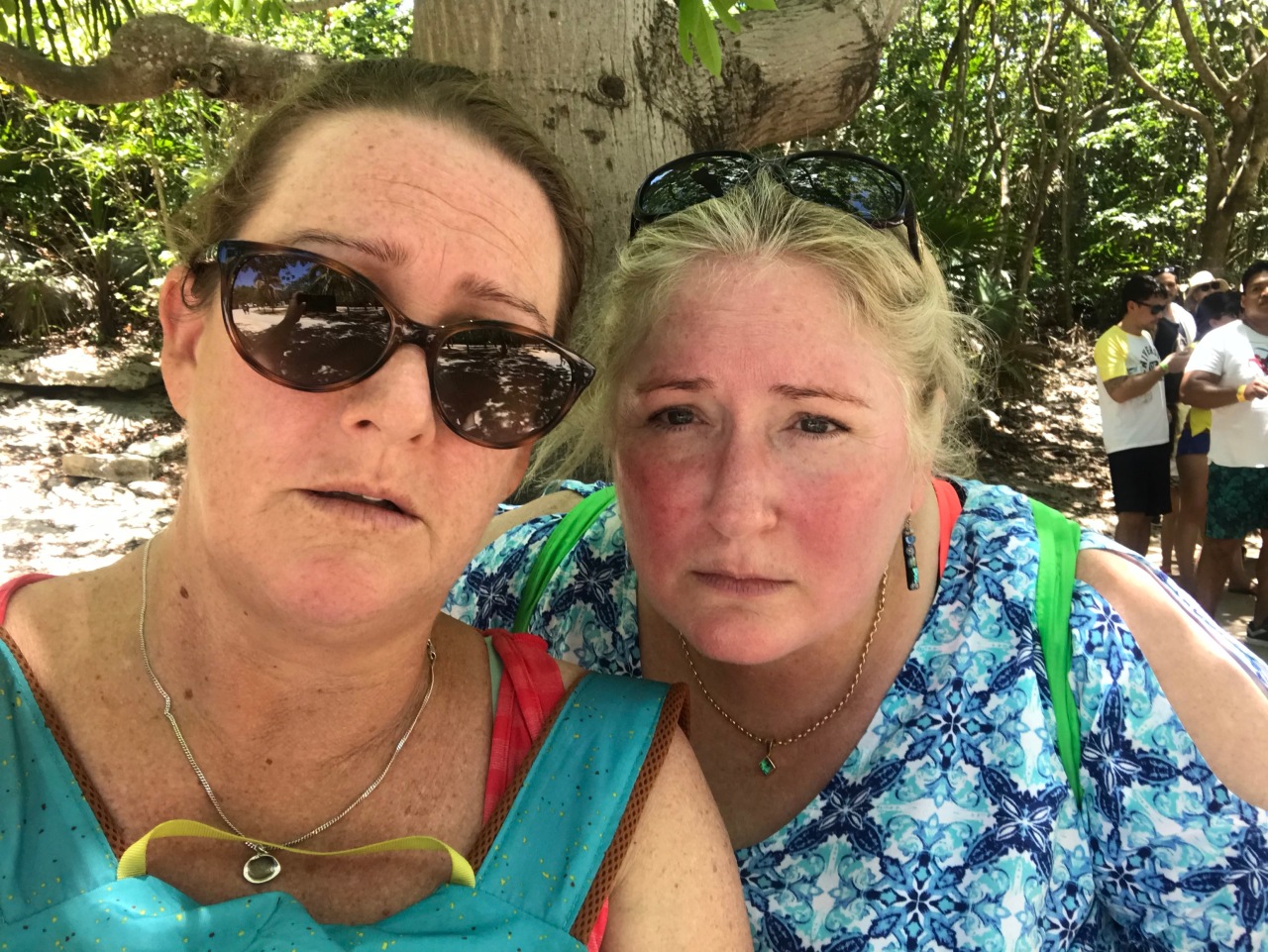 We put in a solid hour before we started to fade.  On entrance there are signs everywhere about this animal – a Mexican racoony type of thing.

Apparently there was one there that hangs around the ticket area that was saved from illness and hand nursed back to health by the staff, so even though he is tame and friendly, he’s not a pet and must not be touched – so, he was on the floor with 4-5 people standing in a circle around him taking photos when a girl walked through the middle of the circle without seeing what was going on and stepped on his tail – to which he bit her.  We were on our way to the tractor bus – we didn’t even break stride…. I don’t think rabies is a thing in Mexico, is it?

Back in the village we sat with a refreshing beverage right next to this fan which was not being put to good use at all!

…and were entertained by (Thanks Wikipedia) the Danza de los Voladores (Dance of the Flyers).  It’s an ancient ceremony still performed today, albeit in modified form, in isolated pockets in Mexico. The ritual consists of dance and the climbing of a 30-meter pole from which four of the five participants then launch themselves tied with ropes to descend to the ground. The fifth remains on top of the pole, dancing and playing a flute and drum. According to one myth, the ritual was created to ask the gods to end a severe drought. 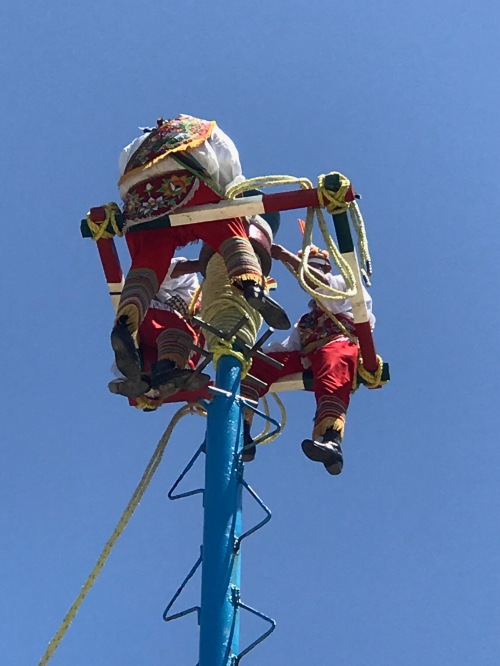 4 men climb up and wrap individual ropes around the top of the pole and around themselves…. not much in the way of OH&S, then one of the guys – the most experienced I would guess blows a whistle whist banging a small drum, then they all drop backwards and the thing at the top spins them around while their rope unwinds… all the while the whistle blower blows and drums and the man on the ground walks around with the hat.

When the Starbucks guy asked for my name I hesitated for a moment because usually my name “Shelley” is heard as Shirley, Cheryl, Cheryl-Lynn, Sharon, Sandra, Sharley, Sally, etc….. but I thought I’ll give it another go – I’ve never been called “Sherlin” before, so that’s a new one. 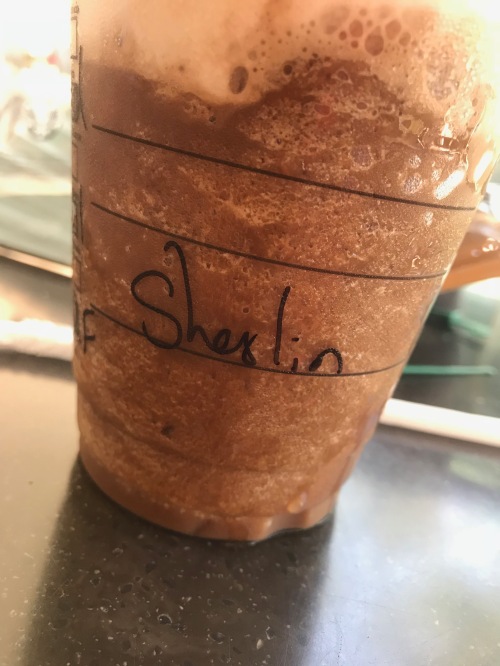 When ML ordered her drink he asked for her name and she said just use the same name…. he obviously couldn’t remember what I’d said first, but must have remembered that it started with “Sh”… funny!

On the way home…. this is how you transport the kids in Mexico!

As it was our last night – I wanted to have one last look at the beach after dinner…..

Look at that pile of seaweed!  It’s time to go….. Mexico!