Does this building remind anybody else of a rack of stacked bowls? 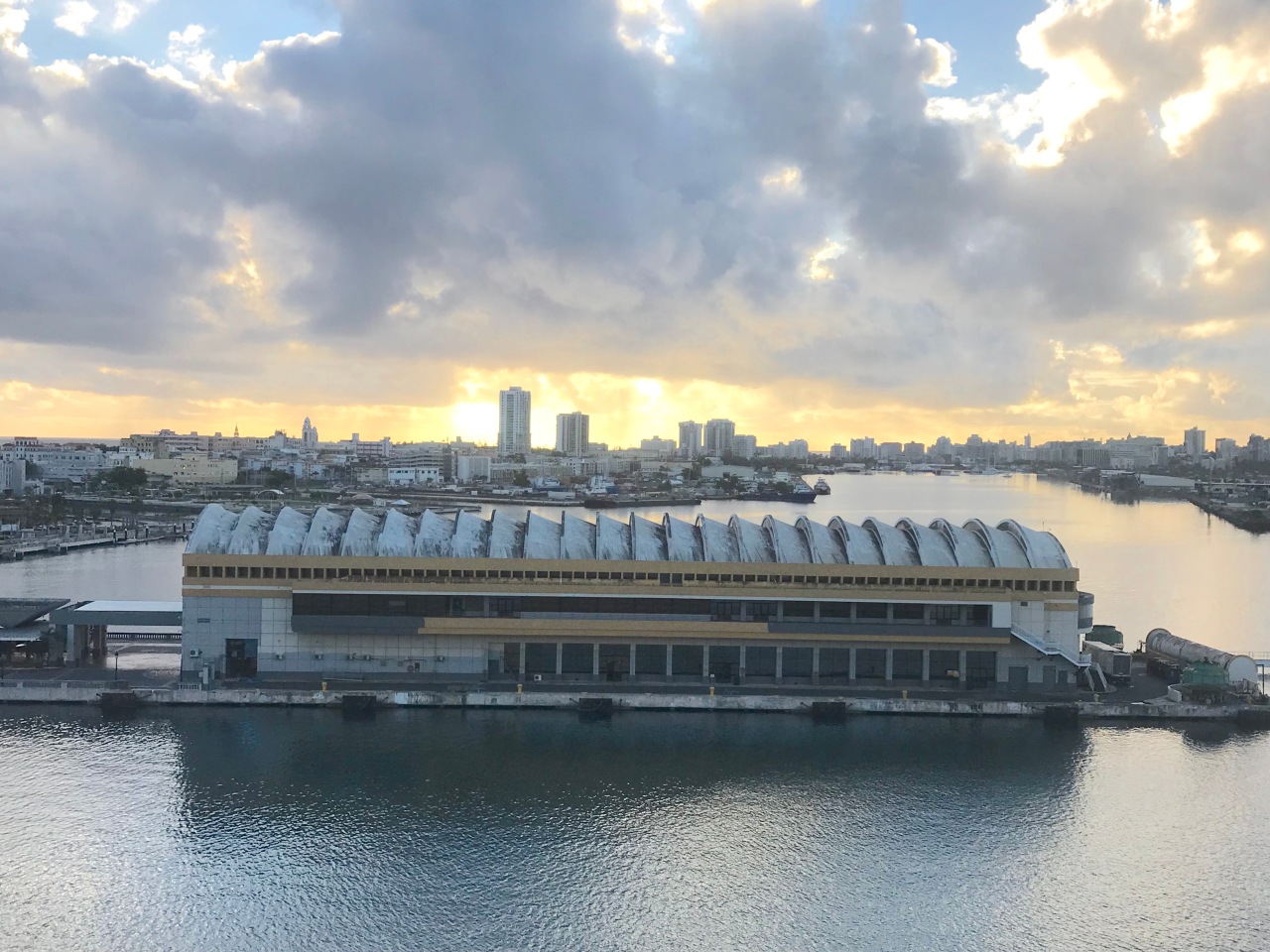 ML has been overcome with a bit of a respiratory issue, so she is staying tucked up in bed today whilst I venture out on a tour – The Wonders of San Juan.

The tour buses are all ready and waiting!

So my tour started out ok in that I got a window seat and a pretty cool tour leader – Luis, however that’s where the good times ended.  Unfortunately the microphone/speaker that Luis was using had a big static problem – obviously something that neither he or the driver could fix easily – otherwise one would have…  the driver’s name was Juan :-).  So Luis acknowledged there was a problem and then just turned up the volume – making it worse… now 1 or 2 of you might know that I have a bit of an issue with these types of noises, especially if I’m meant to focus on what he is saying – it’s like somebody running their fingernails down a blackboard… so I managed to get a bit of information, and then on our first stop, I got out and told Luis that I could go no further.  He was very understanding and pointed me in the direction of the town and back to the ship.

But… what turned out to be a not so good start the day actually was the best thing, because I got to see so much more walking through the town – note to self – stop booking tours! 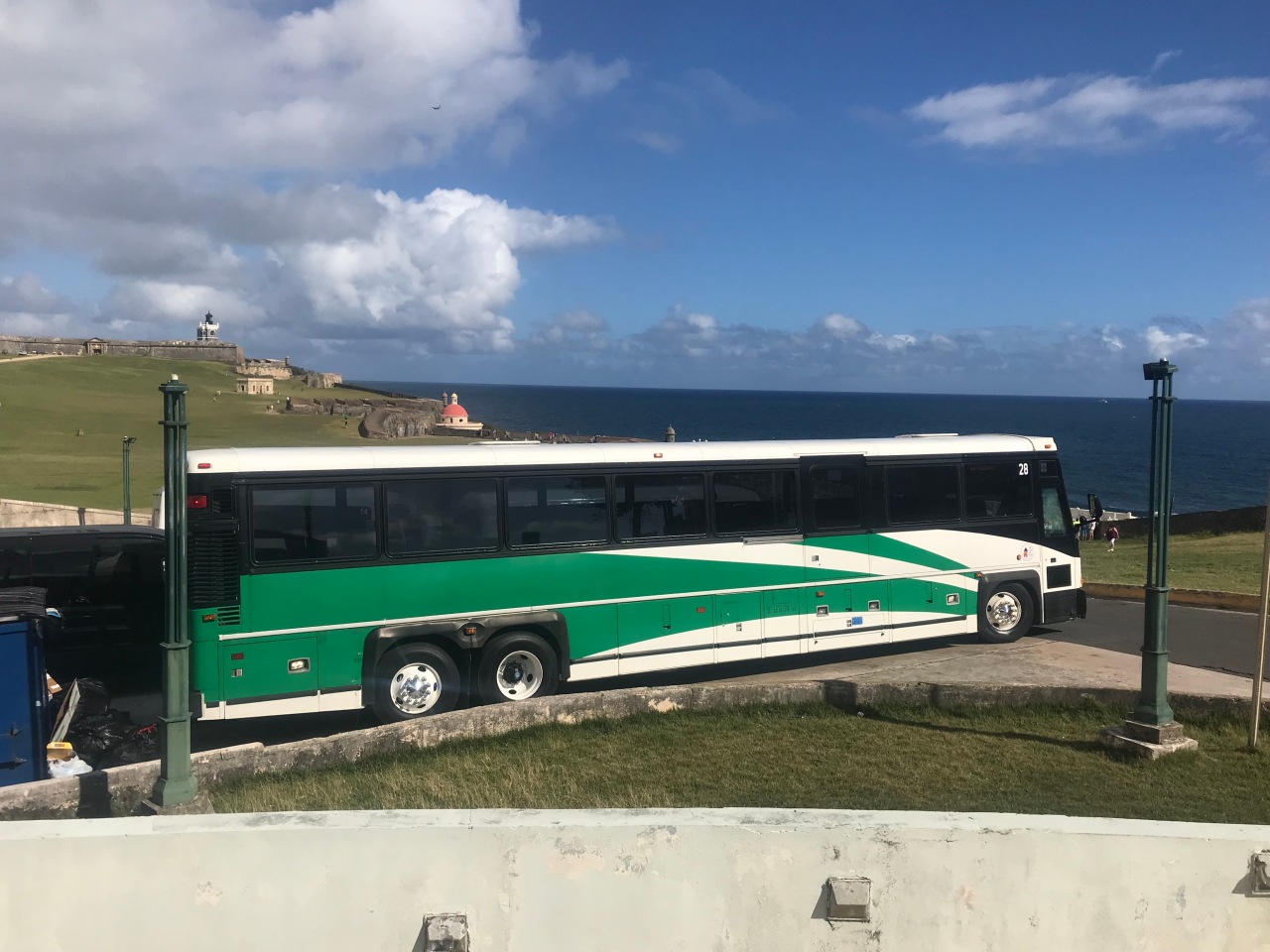 So the city of San Juan is a walled city – the wall still exists.  The island was originally inhabited by a few different tribes of Indians, but when Chris Columbus turned up, and the population got down to dangerous numbers due to infectious diseases and exploitation and war.

Puerto Rico – meaning Rich Port was a place where merchants used to hide their ships filled with all sorts of goods.  It was part of the Spanish Empire back in the day and has been a major military post during many wars between Spain and other European pwers.

During the Spanish–American War in 1898, Puerto Rico was invaded and subsequently became a possession of the United States, but it took until 1917 and the establishment of The Jones Act which made Puerto Ricans US Citizens.

Below is the spot where I hopped off the bus and said Adios to Luis and Juan, and just down the bottom there you might be able to see a graveyard with one of the best views in the world – Raul Julia is buried there and apparently Ricky Martin has put his name down when his time is up.

There are 78 little villages in San Juan like this one below.  They are actually built outside the city walls on land given to them by the government.  They are like ghettos where the lower socio economic group of people live.  This one is called La Perla.  The buildings that I could see looked uninhabitable – possibly from Irma, but it’s possible that they were like that before.

The streets are all cobblestone and the buildings are painted beautiful pastel colours. 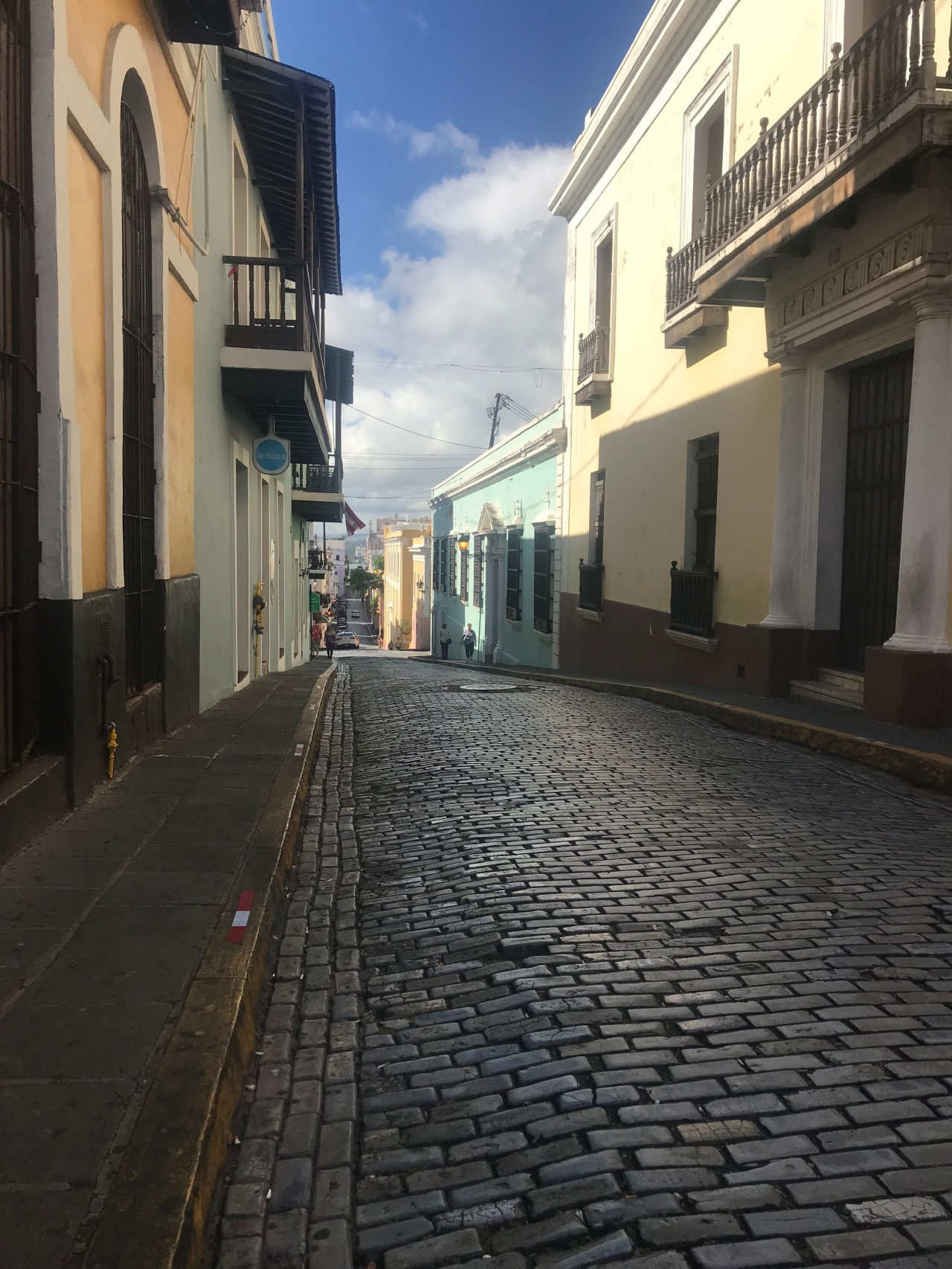 I passed a lovely little square … 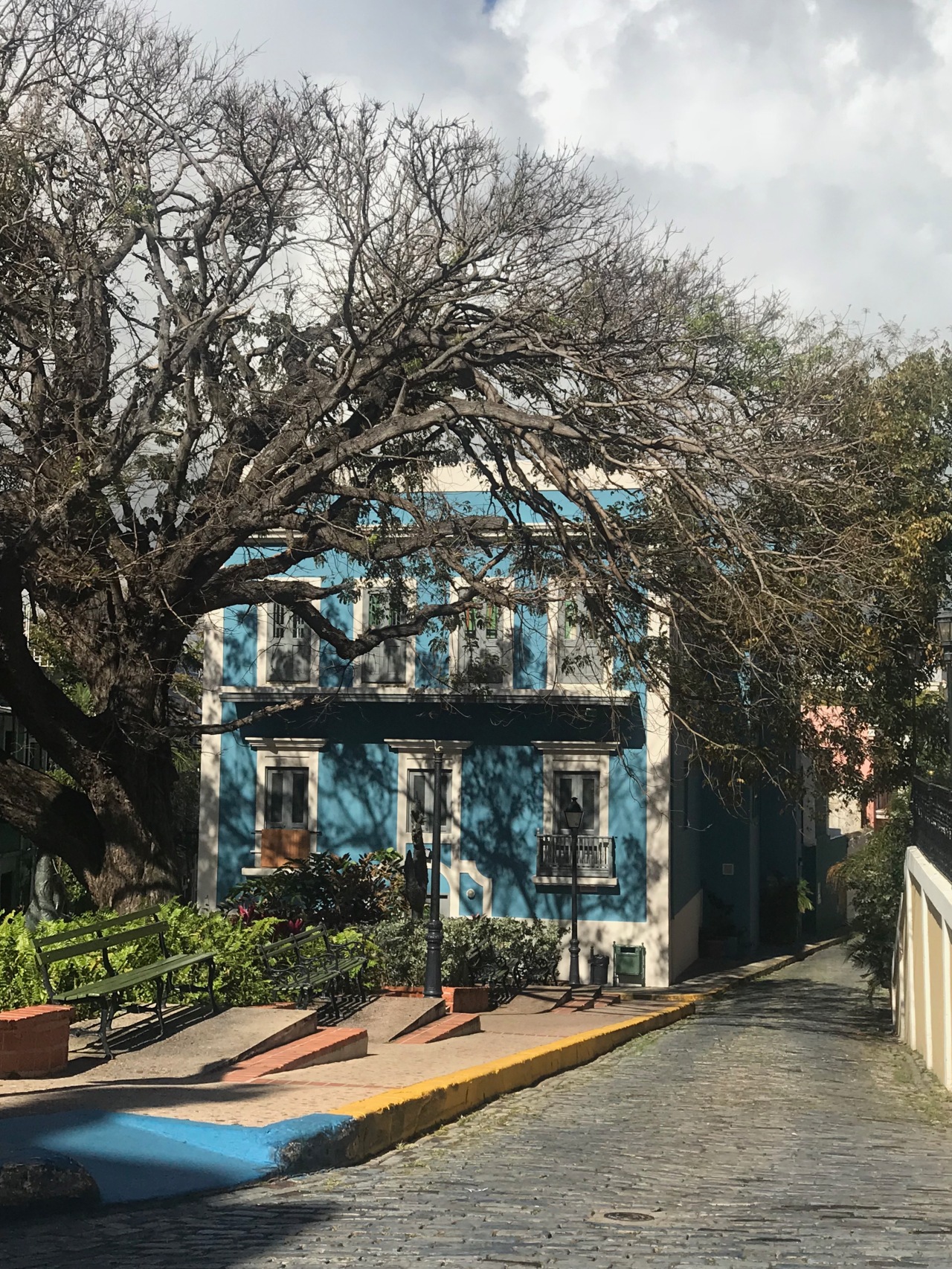 with a church on one side…

and an El Convento on the other.

I love that you could purchase water and sodas at the religious goods store. 🙂

More of the pretty coloured buildings…

and the shop fronts… 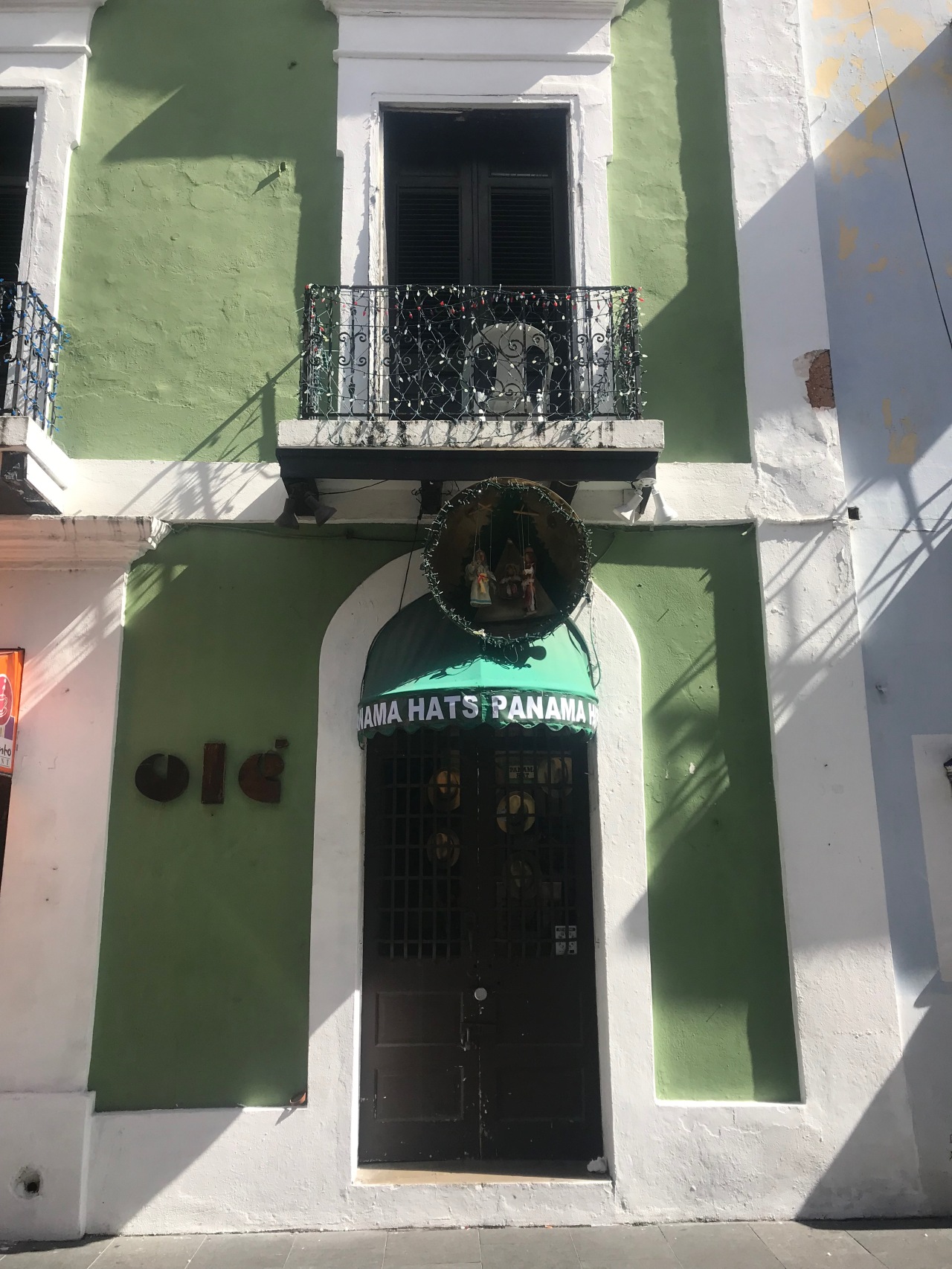 Puerto Rico is quite a religious place…

There are pictures of Jesus and nativity scenes everywhere like this one made out of a coconut shell… I don’t know, but a couple of those wise men look a bit shifty to me.

Another thing that they love here is the Pina Colada because this is where it originated.  Not just in San Juan – but in this restaurant right here: 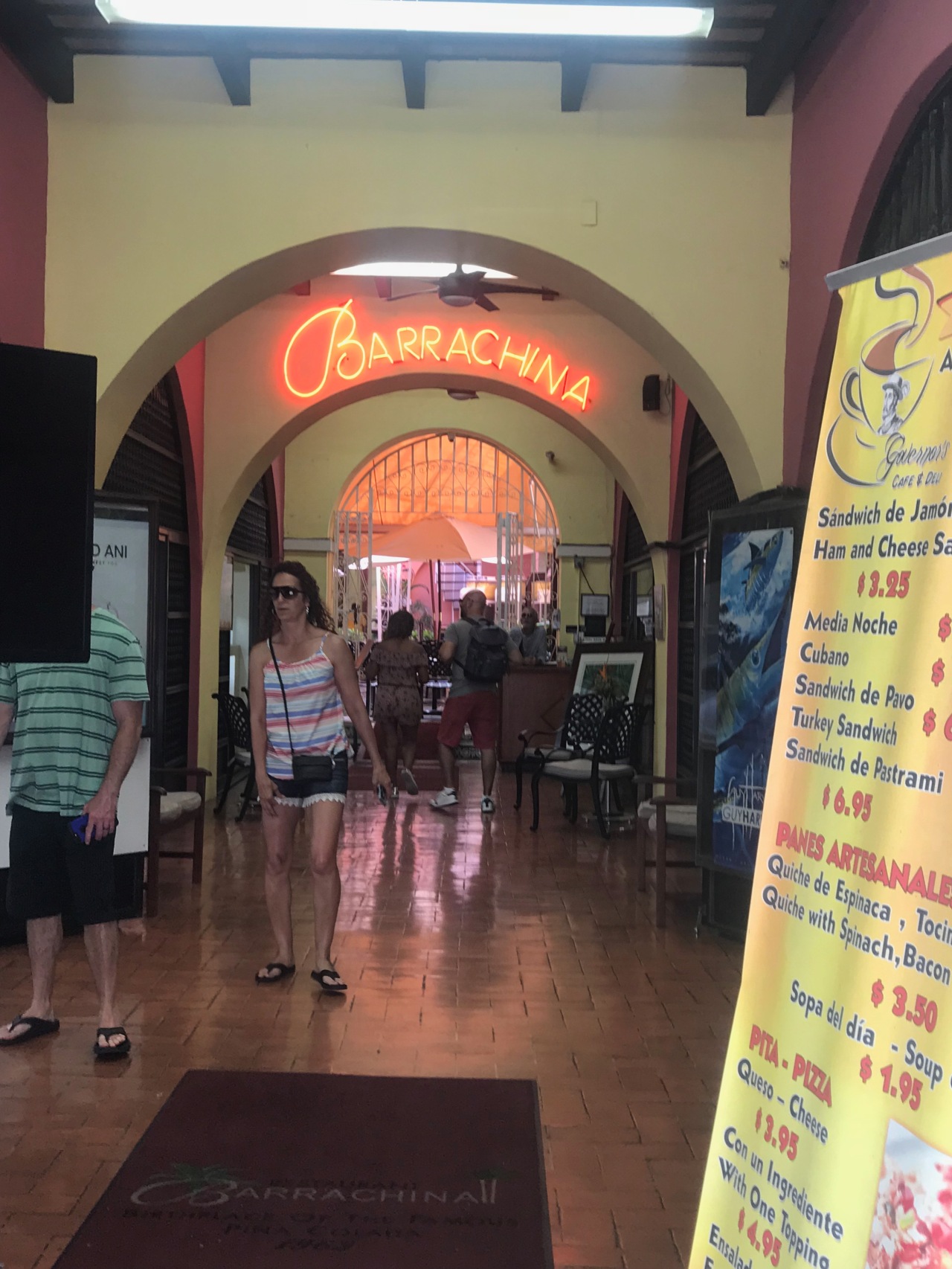 They’ve got a plaque and everything.

Another thing they love which I can completely relate to is doors.  There is a shop there that specialises in making these tiny doors which they will personalise for free.  I thought they were lovely, but would possibly break in my suitcase. 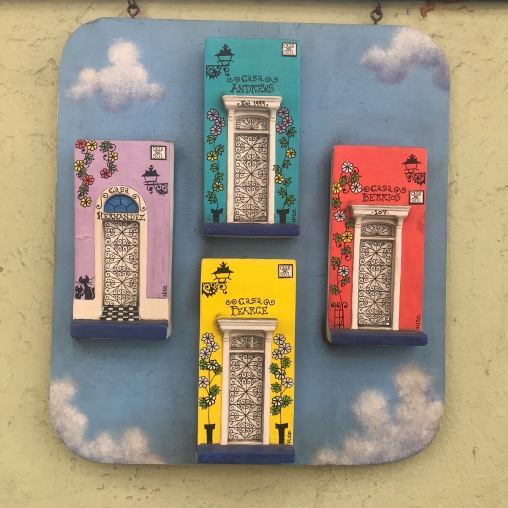 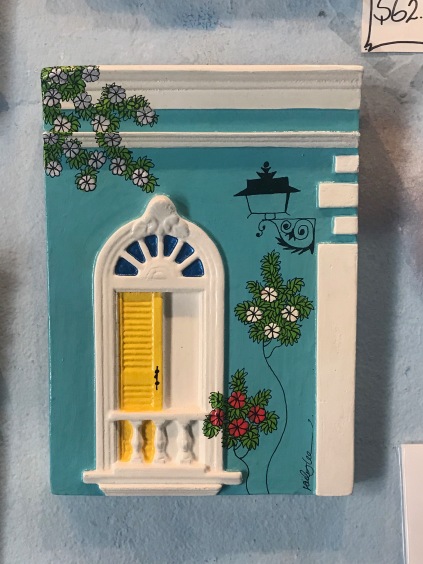 I didn’t have to walk too far really as San Juan is quite a small little place.

I passed some fabulous old buildings…

… and some lovely flash new ones.

I was expecting there to be a lot of Irma damage like there was at Sint Maarten, but San Juan seems to either have been spared or they had done a massive clean up job… in fact, this was the only mishap the I saw and that could have been caused by a car backing into it.

The entrance back to the ship was lined with market stalls selling their wares – most the same as the last.  There was a lot of handy crafts made from reclaimed wood from the storm which is great, but not so great for me bring back in Australia – I know the rules!

Is this what happens to you when you live/travel with the same person for too long?

This was the view from back on the ship where I went to escape the heat of the day.

There were two other ships in port next to us – 1 x Holland America and 1 x Carnival – Here’s hoping that the tourist dollar is helping to rebuild Puerto Rico.

Adios San Juan – you were a pleasant surprise.

Back to life on deck… ML was feeling a touch better after her sleep in and was raring to go for a little bit of music trivia… and would you look who won – solo – like on her own – I mean, I only wrote the answers down – she was a machine! Like a solo music factory – only one team came close and when we ended up with even scores – there was a tie breaker which ML nailed and we went back to our cabin the proud owners of a highlighter each.  Not just any old highlighter – one that clips on with a carabena clip.

Still on a high from our win we dolled up and hit the Japanese restaurant which was hilarious for all the wrong reasons….

The food was absolutely delicious… 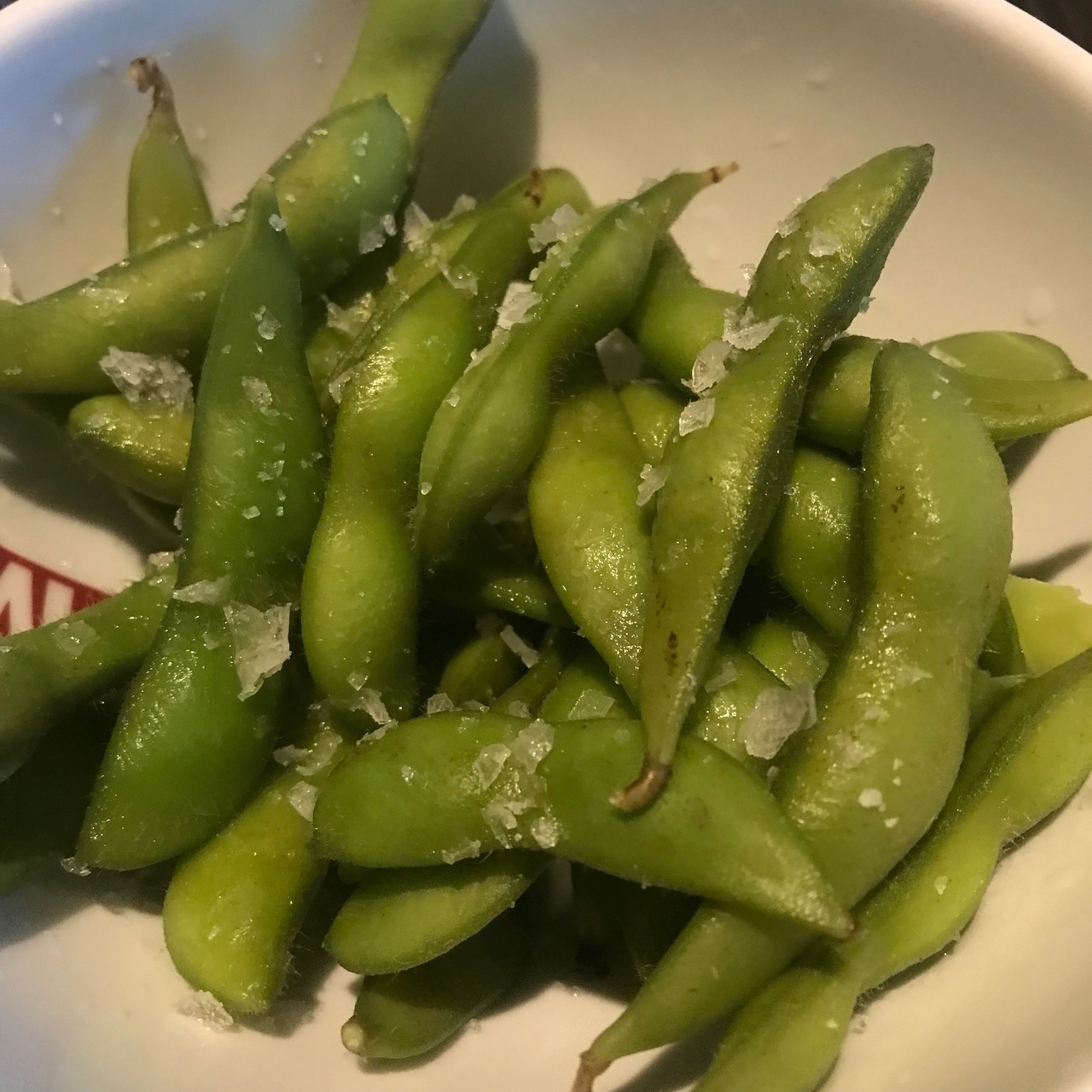 …. but ML can’t use chopsticks, so we got a lesson from the waiter Ed, who is from The Philippines and then he went away and made these for her…

Here’s a close up at his handywork 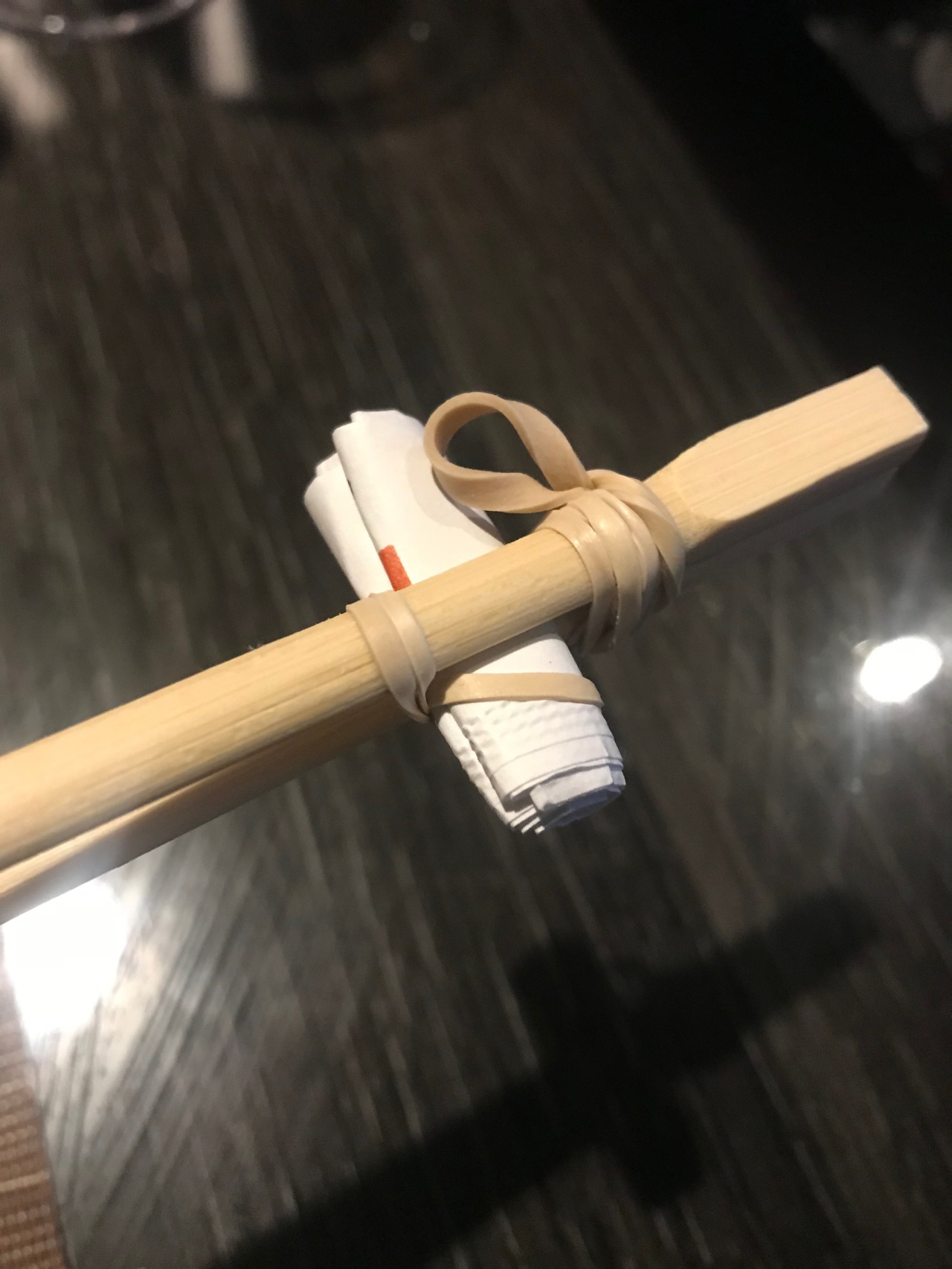 Now there was a lady sitting behind me – in ML’s view and every time she had to read something she’d pop on her glasses – which only had one arm.  ML was trying to tell me about her without me having to turn around and every time she went to tell the story – this happened….

We were absolutely crying… and then had to order with Ed with tears streaming down our cheeks.  Hilarious.  I don’t care if you had to be there – it was hilarious!