There’s been a bit going on the last few days, hence no blog posts…

ML’s NY adventure has come to an end and she has headed home.  Thank you Mrs for sharing this experience with me. 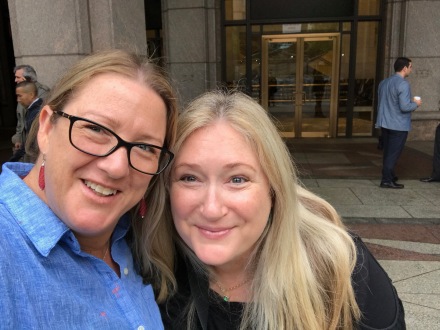 My sister, Jodie arrived and we’ve been getting into seeing & doing what we can before getting on the train. 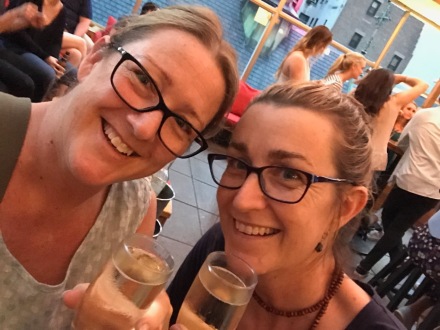 Then hit Bryant Park to have dinner outdoors and look at the buildings all lit up. 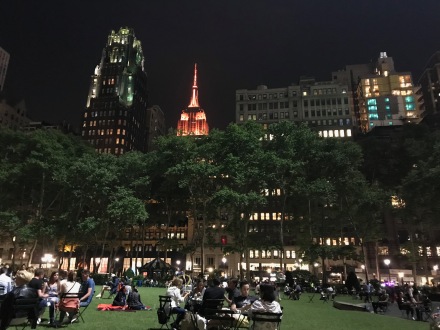 The next day, we subway’ed down to Chelsea to have a look at a flea market – which looked dismal from the fence and they were asking $5 to enter, so we spun on our heels and walked down to Union Square past the Flatiron Building again.

Where the farmer’s market was thriving.  It’s a shame that we couldn’t purchase ALL the produce.

Where we got to listen to this man play his trumpet.  It was absolutely beautiful and the acoustics in the subway are fabulous.

And we headed to the most north the I’ve been in NYC to the Met Cloisters.  Right up past 196th Street!!!!

The Cloisters sits up on top of a big hill that overlooks the Hudson River.  (I think that’s our boat there waiting for us 🙂

So the Cloisters was purpose built in 1925 for the Met.  Some of it is original European materials where they transported it brick by brick and rebuilt it and other parts were built here.

John D. Rockefeller, Jr. provided funds that enabled The Metropolitan Museum of Art to purchase the museum and its collections. Rockefeller also presented the Museum with more than 40 of his own medieval works of art, so the was nice of him.

The Cloisters is situated in Fort Tryon Park, right up near 196th Street.  The park is just lovely to walk through. 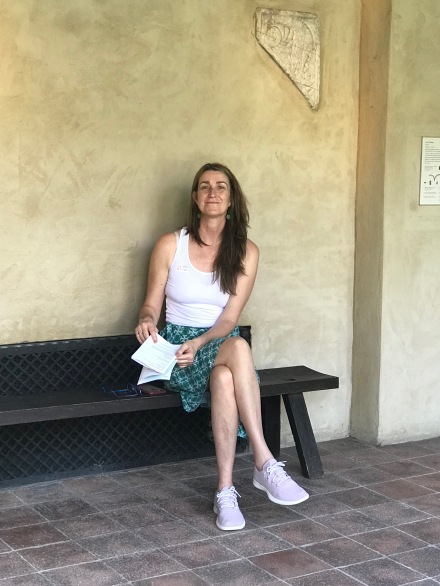 There were quite a few dresses on display…. This one looks like it could come in handy, you know, for just around the house. 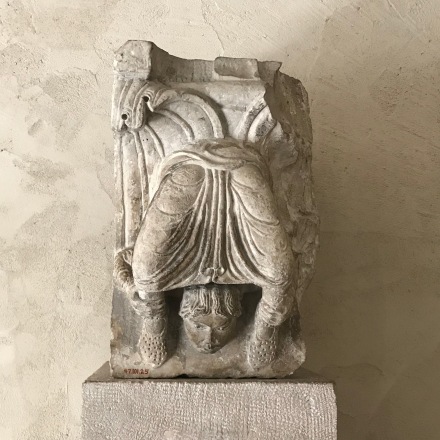 I wonder if Helen Mirren bobs on men were really ever in fashion?

Such a beautiful day with the sun shining…. actually it was quite warm and very humid, but it beats the rain when you’re walking around! 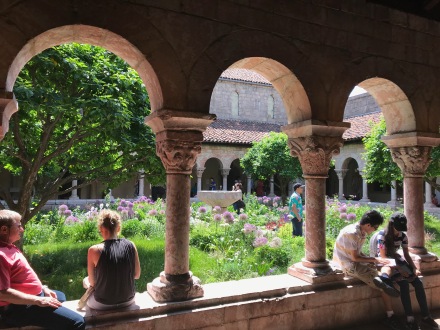 Not sure what this chap is looking so happy about – maybe he hasn’t realised yet? 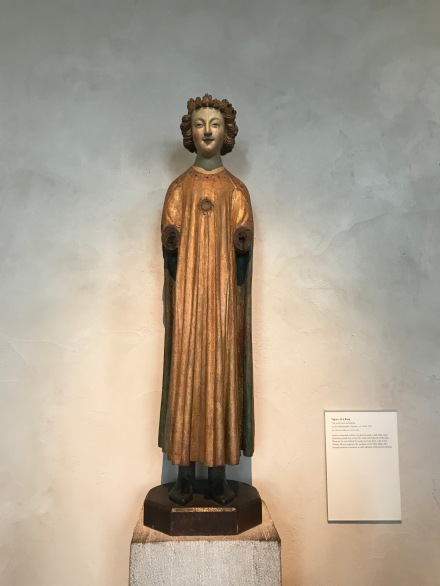 There was a whole room of tapestries and they all depicted a gruesome scene of someone or something attacking something else….. this is not ok, although the dog doesn’t look one bit aggressive, so maybe he’s just playing and accidently bit into an artery?

I’ve been looking for the perfect coat… and I think I’ve just found it.

And a hat to match!

This is the veggie garden 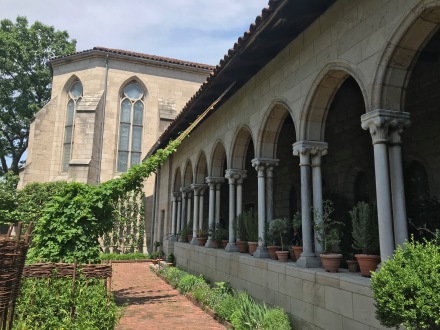 The subway only went to 181st Street and then a free shuttle bus took us the rest of the way up past to 196th Street, it is amazing how different the areas area from the bottom to top of Manhattan, not to mention the other boroughs.  There is a vast difference in appearance of the streets and buildings, the cultural diversity and the people.  Signs and languages change as you move further out of Times Square.

That night we had tickets to see a play – Three Tall Women staring Glenda Jackson, Laurie Metcalf (Jackie from Roseanne) and another lady that I didn’t know.

This was the lovely sight across the road from the theatre…. 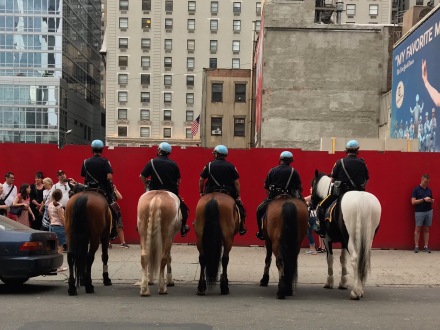 The play was slow and a little boring in parts.  I think the ladies probably did a good job with the content they had to work with.  Anyway, we walked home a little underwhelmed.

The theatre was lovely though – it had a medieval feel about it. 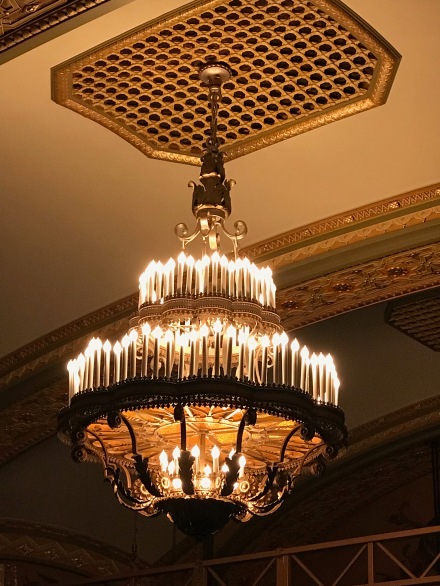 Next day…. I’m catching up!

We got up early and planned to walk up through Central Park to 77th Street to have a look at the flea market…. after the dismal display in Chelsea, I wanted to make sure Jodie experienced a lovely flea – so we went back to the one I had been to before.  There were some different stall holders, so that was lucky for me.

We got to Central Park and it seemed a marathon had just finished.  We were there quire early, so I hate to think what time it started!

We took the obligatory selfie at the Bethesda Fountain…

… and a last look at the lovely boat house.

I do so love Central Park!

There are not a lot of full length photos of me on this blog, so here’s a little treat for you… Me on my favourite bridge.

Here she is from afar…

And a little close up of the goings on…

Then we followed the lake all the way up to 77th Street. 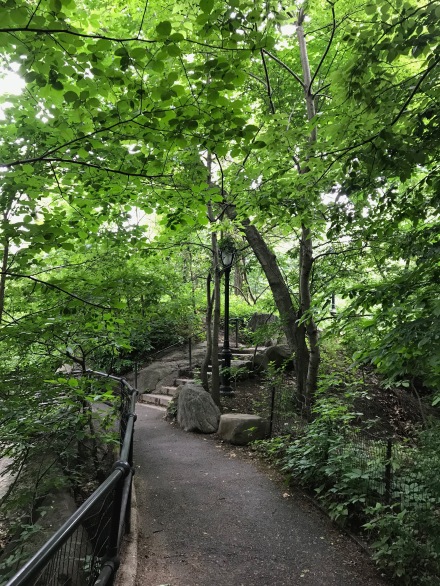 The flea market didn’t open until 10am, but as luck would have it just across the road (behind the museum of Natural History) there was a farmer’s market on the street.

There were lovely flowers…

And prize winning “yogurt”… we tasted it and then purchased some cause it was delicious!  Worthy 4th place prize winners.

Once we got to the flea, there were over 100 people waiting at the gate to get in.  There were all sorts of stalls.  The market theme today was ”handmade’, but here were also a lot of antique, recycled items there as well.

This stall was all about old glass bottles that they had found around New York.  They dig at city excavation sites in the 5 boroughs and then research how old it is and what it was used for etc… The man, who looked to be no older than 50 has been collecting bottles this way since 1969!  I would have liked to bring the ALL home with me.

I have realised that I have a small obsession with brooches and purchased another pretty one from a French lady who told me it was an antique from Paris – who knows?  But I loved it.  Apologies, there is no photo at the moment because I’ve packed it.

So after the market we headed back to midtown as he had tickets to see the Harlem Gospel Choir.  They do a gig at Sony Hall in Times Square every Sunday and as part of the ticket, they put on a full buffet lunch!  Random, I agree… but it seemed to work. 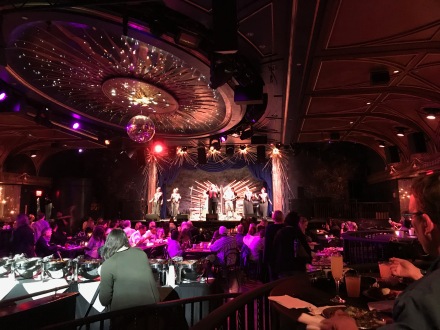 The choir was great.  They started out with a couple of numbers and tried to get the crowd clapping along, but the crowd weren’t quite warmed up yet, so they had their work cut out… but by the end, they had everybody up on their feet singing and dancing – it was an excellent experience.  There was a bit of audience participation involved where they asked people to shout out the answer to a question about a song – which a lady at the front knew, so they invited her on the stage and she turned out to be Nicola from Australia who was there on her honeymoon, so they asked her to sing it – she was very shy, but she did it and she sounded awesome… she very graciously handed back the microphone, but it would have been good to hear her sing the whole song! 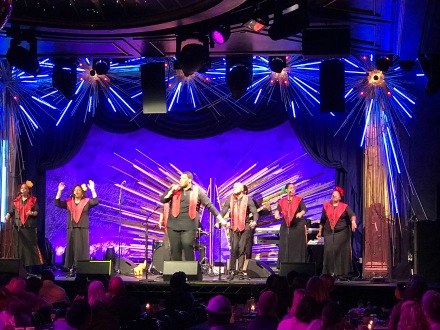 So racing through the rest of our day… we popped into a few shops in Times Square before the throngs of people arrived for the evening and saw this chap…. He even sounded like the Donald.  This man asked, “How much to take a photo?” and DT replied, “What ever you want, $10,000, $20,000…” 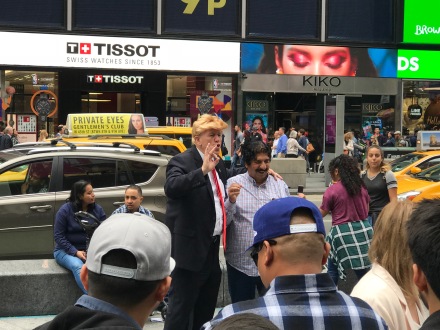