The Hurtigruten acts as a cruise liner, a passenger and car ferry as well as a transporter of goods.

Here’s our ship – the Trollsfjord arriving into Kirkenes to pick us up. 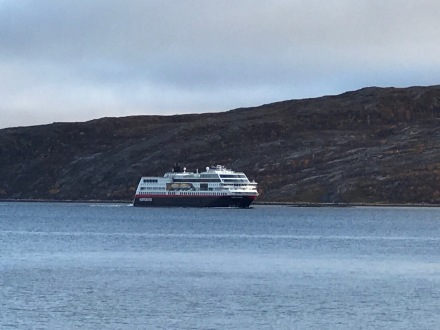 For those of you who have been following along on this journey, you’ll know that we haven’t had a huge amount of luck with the weather – which is strange for us, because magically the sun usually follows us where ever we go…. but not this trip.  We were lucky enough to have an afternoon of sunshine in Iceland and then today the clouds parted and the blue sky took over – this was what we were hoping for because clear skies = way better chance of seeing the northern lights… and being on the coast and on the ship = an even better chance. 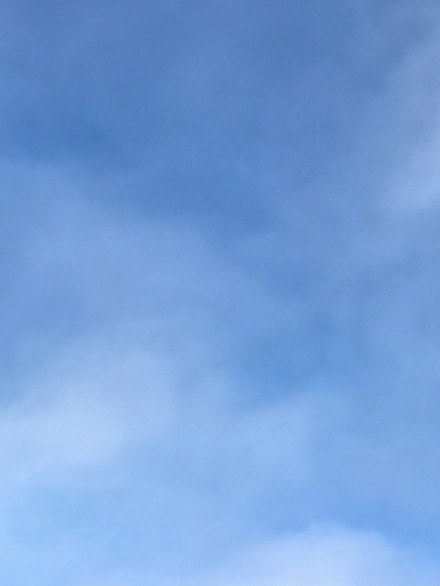 Here’s the planned itinerary – because the ship is a working ferry, it doesn’t just dock in one place for the day or night.  The stops vary in length from 15 minutes to a couple of hours.  Here’s Me Jen on the top deck waiting for the sail away.  She’s fairly brisk up there on deck. 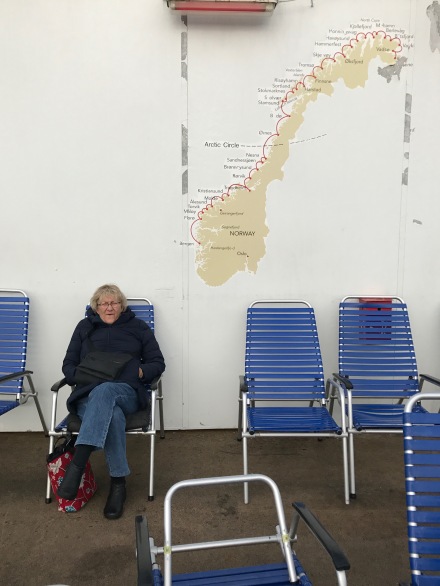 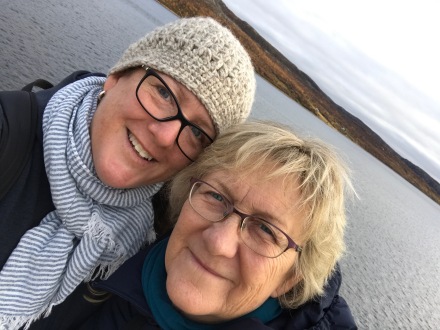 The journey south takes us past many an unpronounceable towns, cities and villages… some are only about 2-3 buildings worth with no visible road in, meaning that they’re only reachable by boat.  As Me Jenny says in every small town we come to…. “Ooh, you’d have to have a hobby if you lived here.” 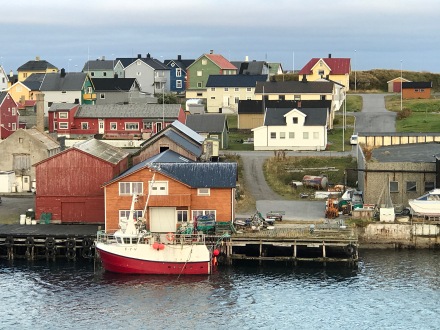 On our first clear night since heading to Europe, we were treated to a bright orange moon… 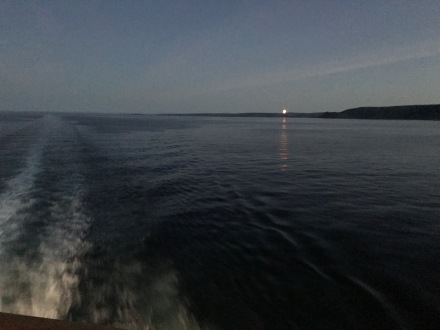 … and our first glimpse of the northern lights!!!!  Seeing them with the naked eye is better than a photo taken with an iPhone. 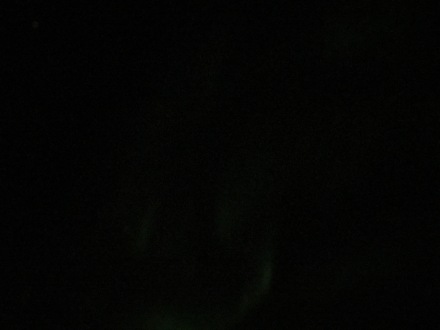 Or, you could bring one of these…  This chap in the next cabin had all the gear – a number of lenses and a full tripod. 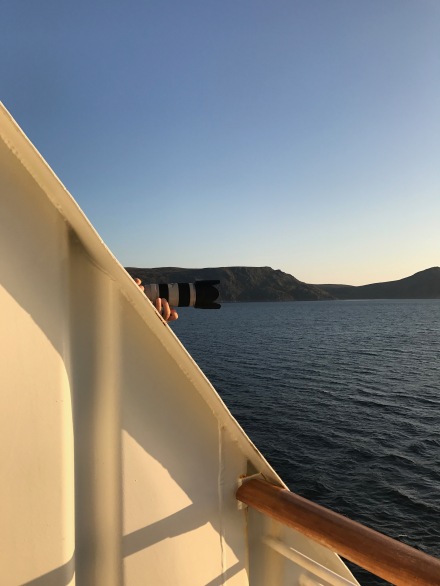 Hammerfest – the most northern town in the world…. apparently there are other towns and villages more north than this one, but they’re not an official town and they didn’t claim if first, so….. 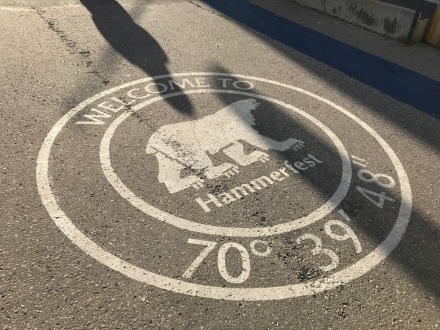 Besides being the most northern town in the world it also has a church that was built to represent the fishing industry.  I’m not sure which part…. maybe the beams are meant to resemble a fishing net?  Not sure, but they did have some lovely stainless windows. 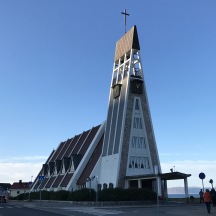 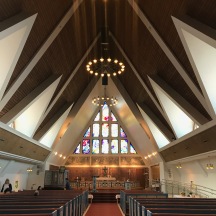 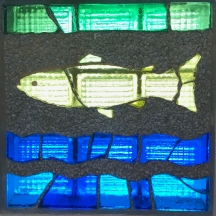 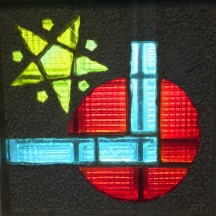 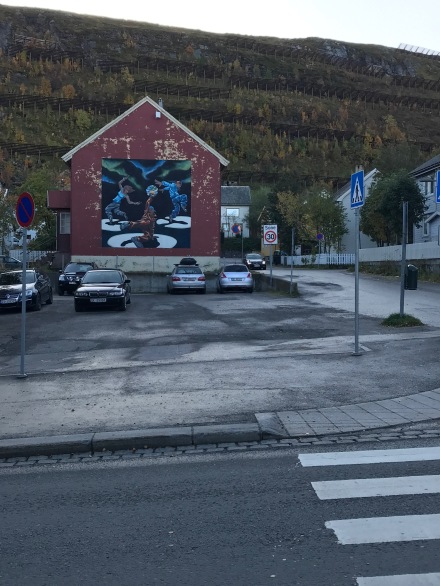 And just down the street is the place where you can pop in for a burger or some nuggets and bit of 50 Shades of Grey….. so they’ve got that covered. 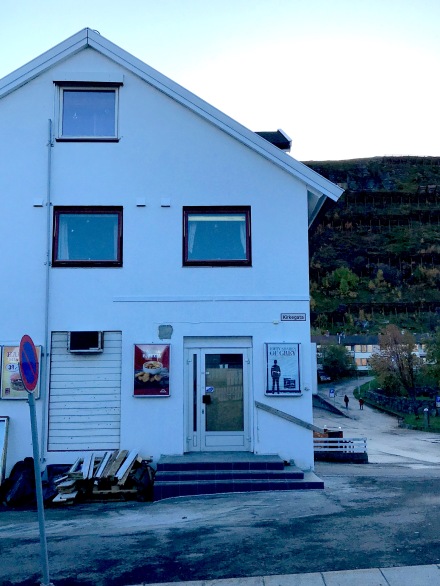 This was a museum that Jen had read about and thought it worth a visit.  It goes through the history of Hammerfest and how it was flattened in WWII.  I don’t think I’ve ever considered Norway as being involved in WWII, but the Nazis occupied Norway from 1940 when the Royal family and the government fled to the UK to continue their resistance from there… until 1945 when the Germans finally retreated.  In that space of time they took themselves all the way up to the most northern town and bombed it and burned it to the ground.  Apparently they wanted to use that area as a strategic outpost but really they didn’t want anybody else to have it.  Some people were evacuated and some buried their possessions – including furniture which they were able to retrieve later.

There wasn’t much in English in this museum, but the pictures told a thousand stories. 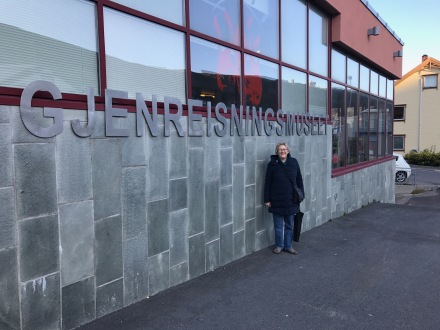 Hammerfest is quite a large town and they have a number of restaurants…..  Included in the list is Ellen’s Cafe – you can find it at the back of the 2nd floor above the Co-op supermarket and Dickson – specialising in Chinese and Sushi. 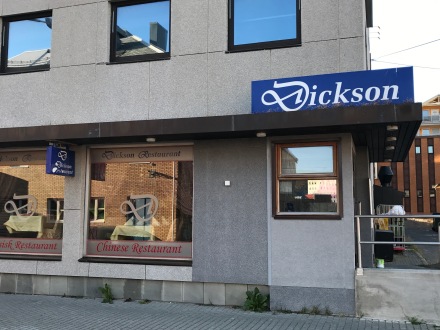 Because Hammerfest is a relatively newly built city, there are a lot of buildings that look like this.  I can’t decide if I like the industrial feel or if I want to call the police. 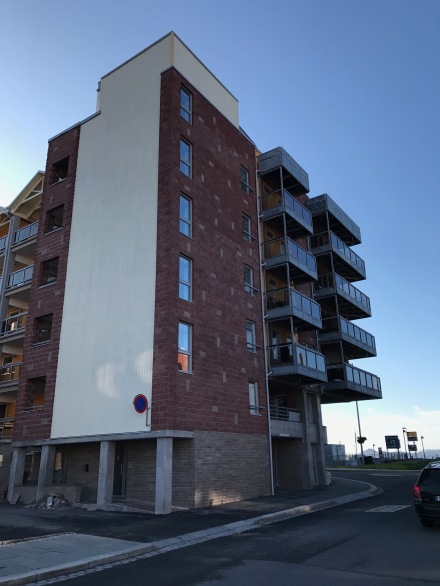 After all that history, it’s time to get back on board for cup of tea time on the balcony in the sun…. 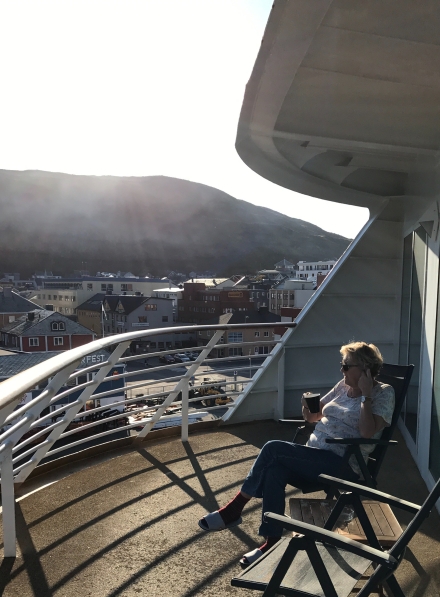 in ya slippers.  Why wouldn’t you? 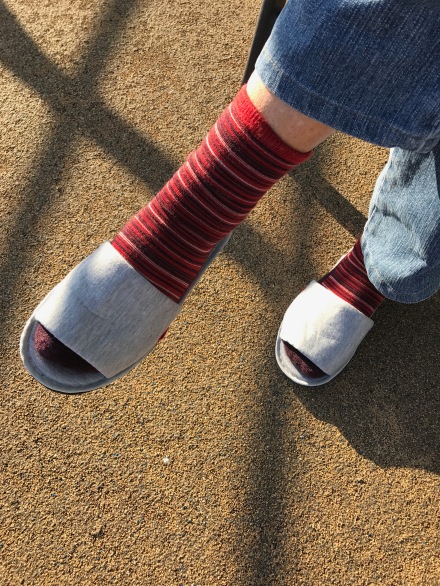