Yesterday was our Monday day off and that’s exactly what we did – Nothing!  Part of the team (GK & Erin) went to the swimming which  they said was awesome and we watched whatever we could at home on the telly – there was lots of lawn bowls, women’s weightlifting and netball – where the scores were over 100 vs less than 10! 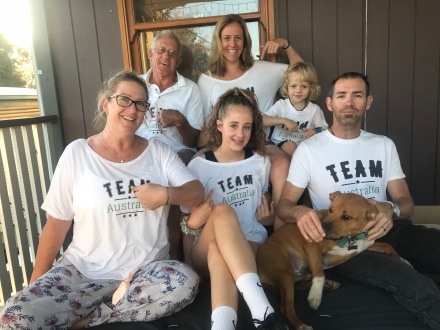 GK & Erin were heading to the beach volleyball in Coolangatta, Rob headed back to the hockey and Madds and I hit the squash courts.

We were a little apprehensive  at the thought of squash, but to our surprise and delight – it was really exciting!  We found ourselves in the crowd at the ‘show court’ which is clear on all four sides watching  New Zealand vs England and it was a great game.  It was funny, the crowd was generally quite reserved throughout the day, but this game got the people revved up and people got up on their feet on the last point.  So exciting.

Because of the 4 glass sides and because the players wipe their sweaty hands on the walls, there had to be a team of cleaners on hand to do emergency wiping.

We found ourselves sitting next to a bloke who once played against some famous squash player – he named dropped a bit which was wasted on us…. and the man on the other side of me runs the squash courts in Goondawindy – so we were in great company.

We were there to see the doubles and mixed doubles – I didn’t even know you could play squash in doubles, but they have built courts with movable walls – ingenious…. this is either what’s left over after they’ve moved the walls to the courts on the left and right, or….. it’s a court for the individual pursuit…. or where you practise your straight shots… or where you get put if you break the rules.  Who knows?

Here’s the view from the other side.  It was a little disconcerting having the ball hurtling towards you though.

For some random reason Anna Meares was there and got to have an interview with this bloke.

Then straight after the exciting NZ vs England game – which went to 3 games, the Aussies played against Guyana which was over in about 14 minutes.  Go Aussies! 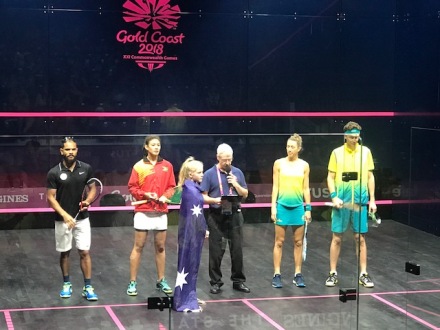 On the way out we found that GK & Erin were on the same train, so we found them and debriefed on our respective sports all the way home.

We are loving The Games!