What’s a trip to New York with a ride on The Jitney out to the Hamptons?  I mean, I ask you.

There are a number of ways you can get to the Hamptons from NYC.  You can drive (no thank you), there’s the train (which takes 3.25 hours because it stops at every little town long the way), you could take a helicopter or small plane (to your private mansion) or you can catch “The Jitney” – a luxurious coach transportation…. this is what we chose.

The pick up point was on Lexington between 59th & 60th – opposite Bloomingdales.

We had been looking at the subway map to see if there was a way to get there easily, but I read the map wrong (I know – that’s unheard of!) and we ended up on 53rd street instead.  Our instructions were to be waiting at the spot at least 7 minutes prior to departure at 9.50am, so we fast walked the 6 and a half blocks and made it right on the dot. 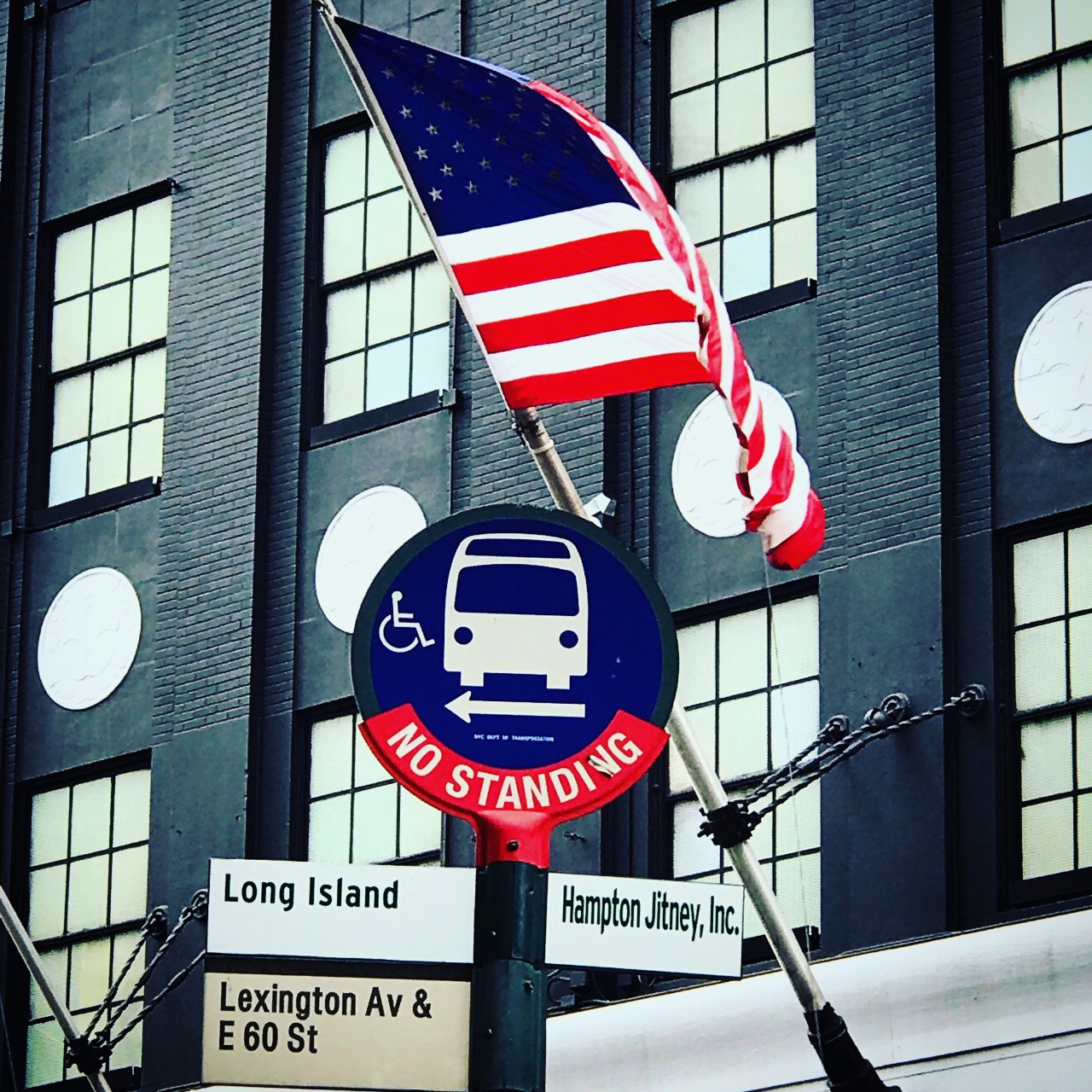 However, the Jitney was 20 minutes late. 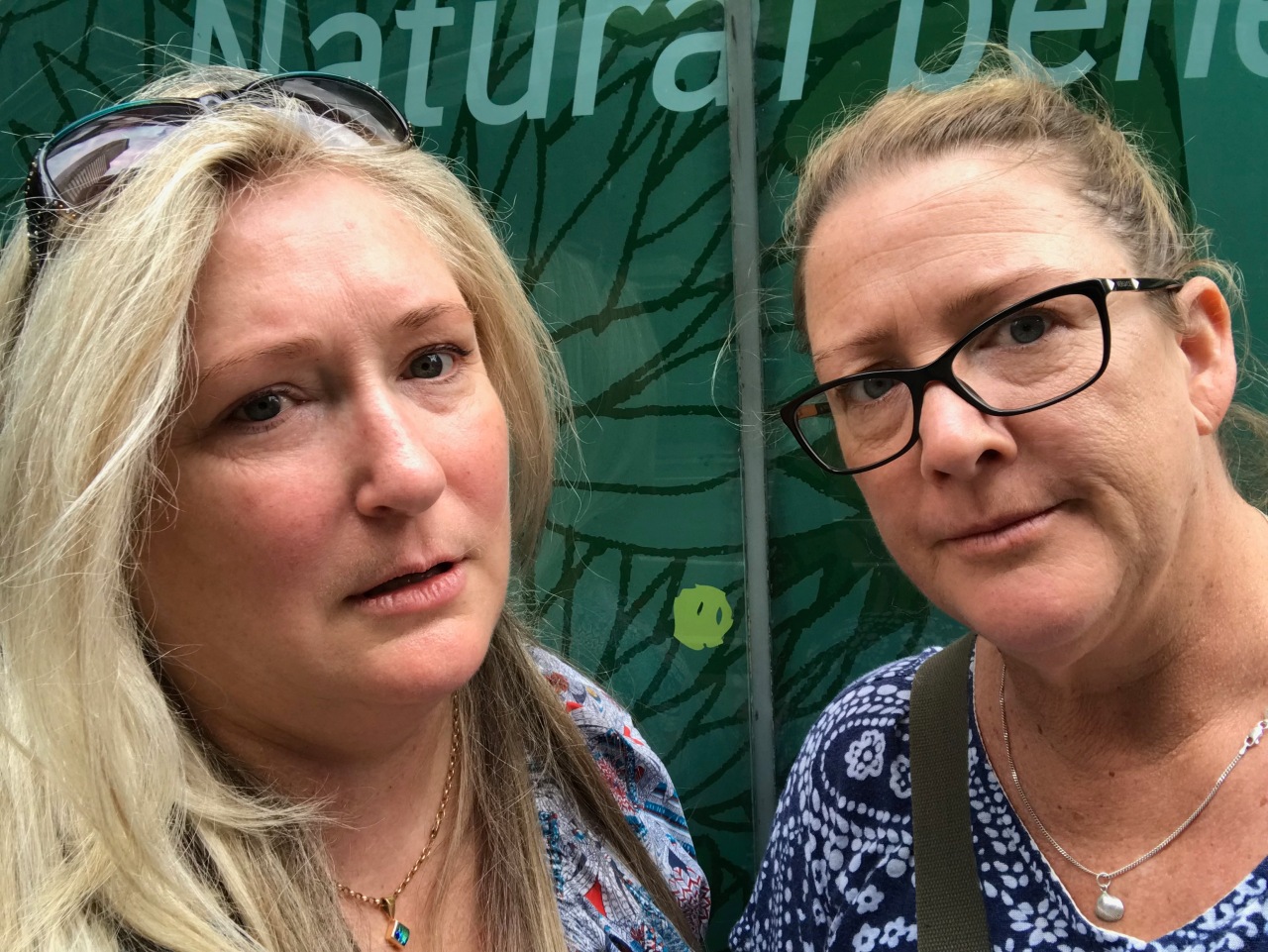 But once we were on we were trè excited…. we’re going to the Hamptons!

We made a few stops before getting on the Long Island Expressway to pick up more people.  This chap here was sitting alone, so there was a spare seat next to him.  The bus wasn’t completely full, but there were limited seats left when 3 ladies hopped on and tried to sit next to him.  He said to the first lady before she even sat down, “You don’t have to sit here, there is plenty of room at the back.”  The lady was confused and I don’t think that English was her first language, so she asked, “You don’t want me to sit here?” and he repeated, “there are plenty of seats down the back.”

We were watching it all unfold from our seats on the other side of the bus and couldn’t quite believe what this man was doing/saying.

The 3 ladies obviously felt uncomfortable, so they all got up and moved down to the back where there was indeed three seats together, but then everything erupted. 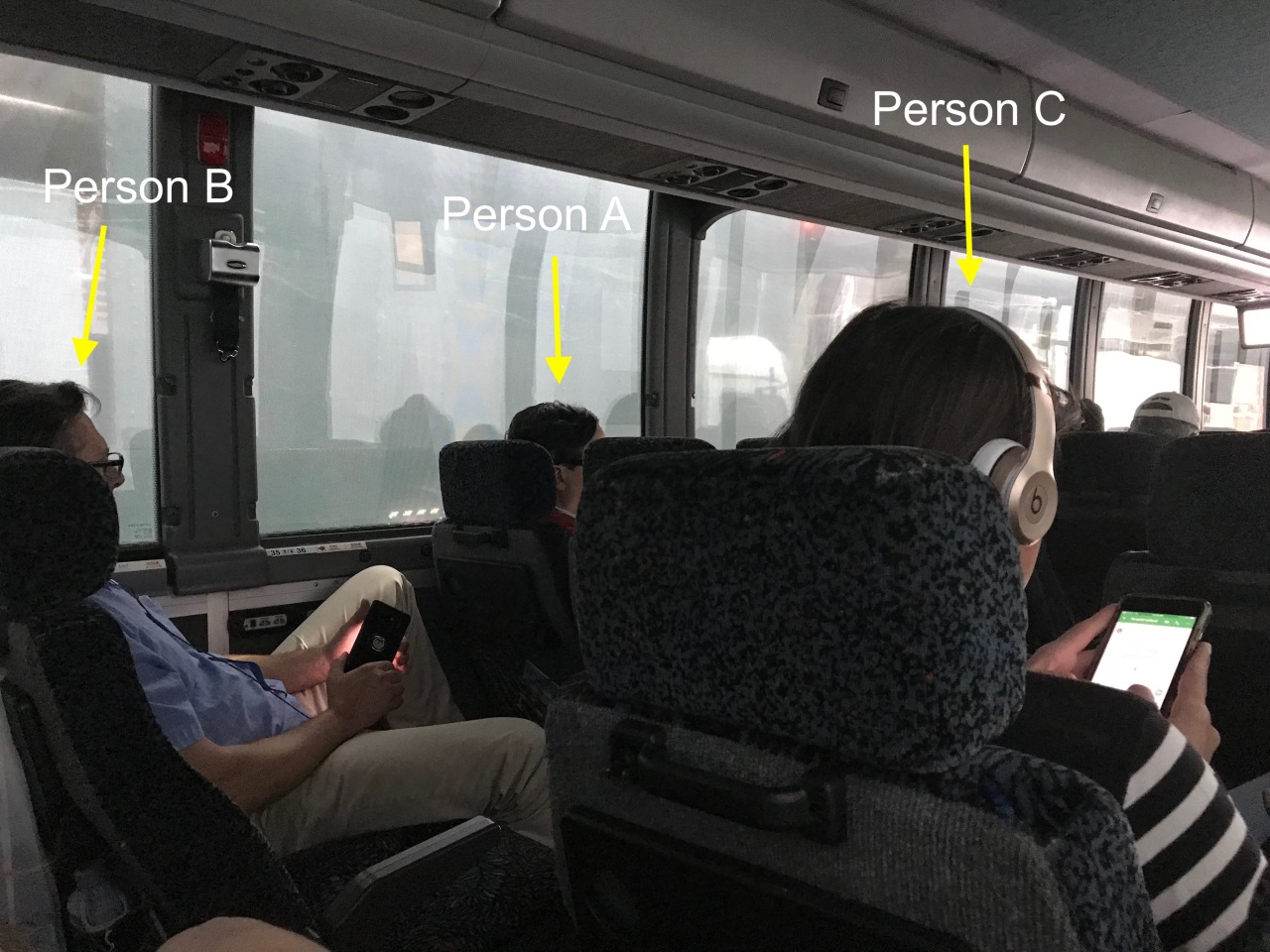 When the ladies got up and moved, these two zeros jumped to their defence.  “You should be ashamed of yourself.” “You should be embarrassed of your behaviour.” “You are not a gentleman!” “You can’t do that, if you want to sit by yourself – you move to the back – those ladies have every right to sit on these seats – they belong to everybody!” “How does it feel knowing that this whole bus thinks you’re a asshole?”

Things quieted down after that… but the man in question showed absolutely no remorse and was not apologetic and after explicit instructions from the driver not to talk on your phone – he made two calls.

Anyway – we got to Southampton and luckily for us, our car hire place was right there in the same building.  We had booked a Mitsubishi Mirage, but when we got there our new best friend, Samantha upsold us to a Maserati!  I bet she corners like she’s on rails… but I wouldn’t know ’cause I never when over 55mph. 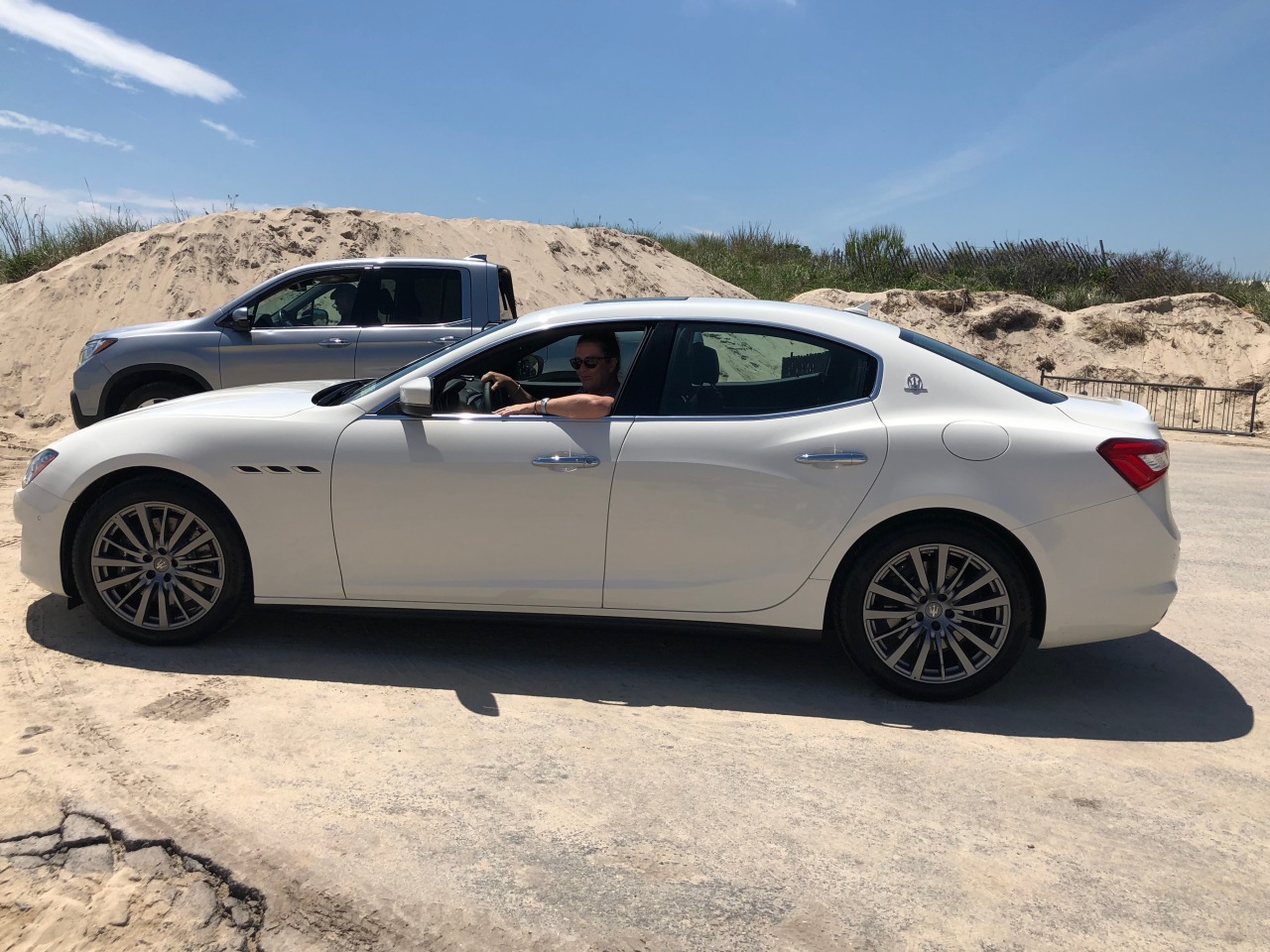 Does it suit me? 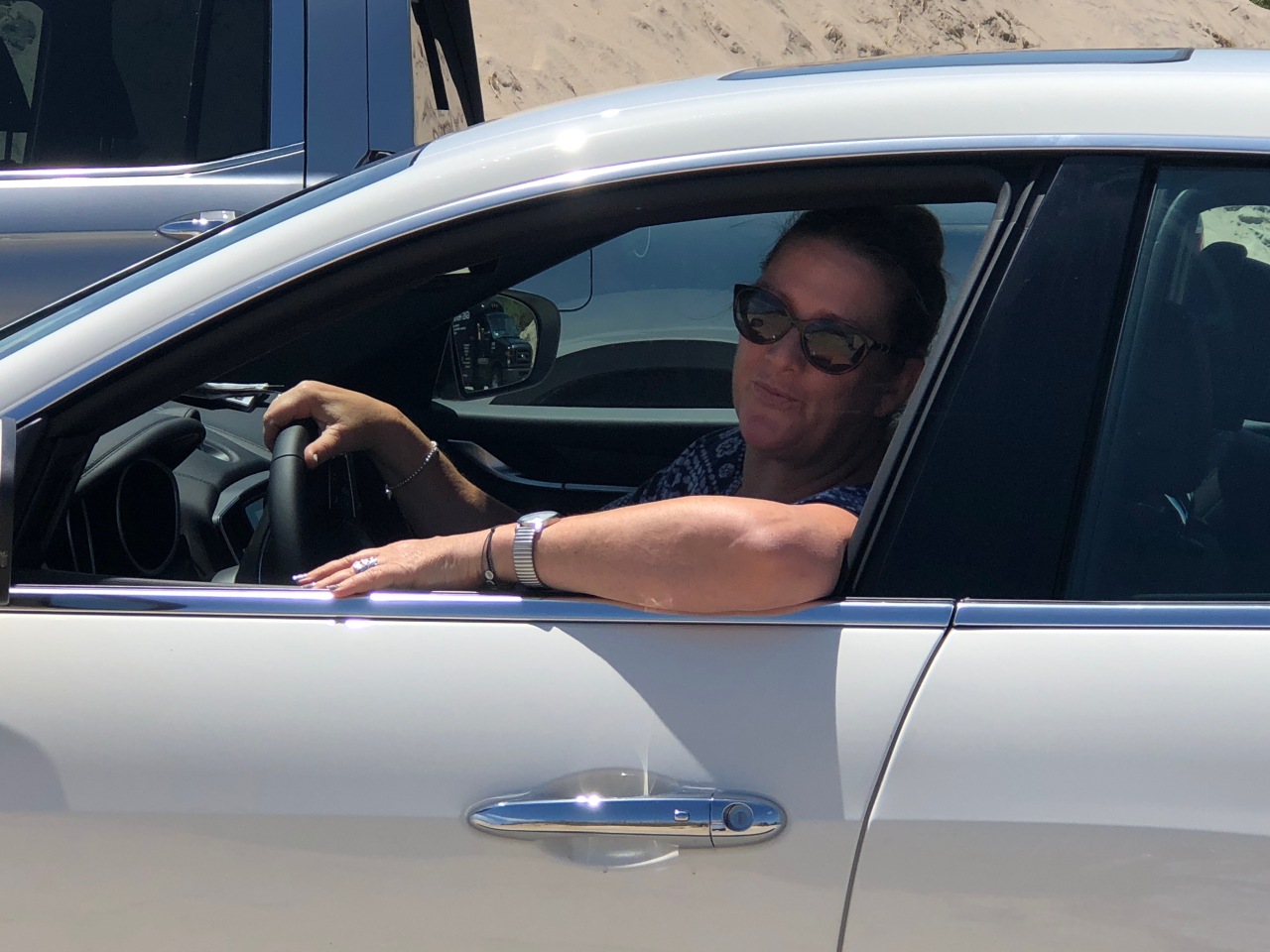 It was brand new (only 93miles on the dial) and had all the gadgets that open and shut…. including this slightly ominous feature – It’s a tag you can pull if you are ever locked in the boot, um……

So we drove east from Southampton and then up to Sag Harbor which is one of the prettiest little villages on Long Island (and so far I’ve seen 2).

… and walked directly across the road to the American Hotel for a lovely luncheon on the verandah to watch the world go by.

Although you’d rather be looking at this pretty lady, wouldn’t you?

The restaurant had a French feel to it and we were served by a gent from Asian decent with peroxide blonde hair and a fabulously happy demeanour. 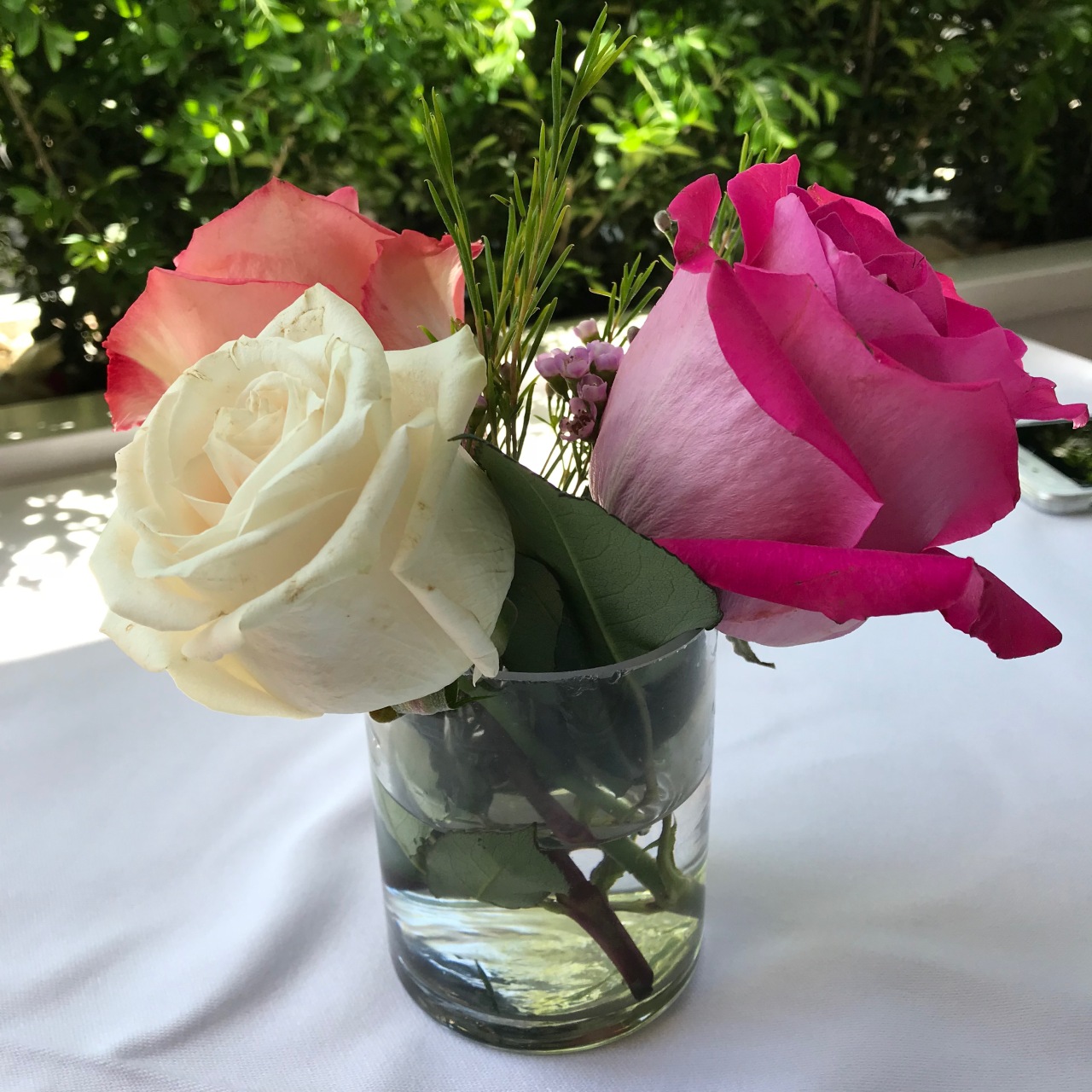 I’ve got no green thumbs, but could this be Geraldton Wax? 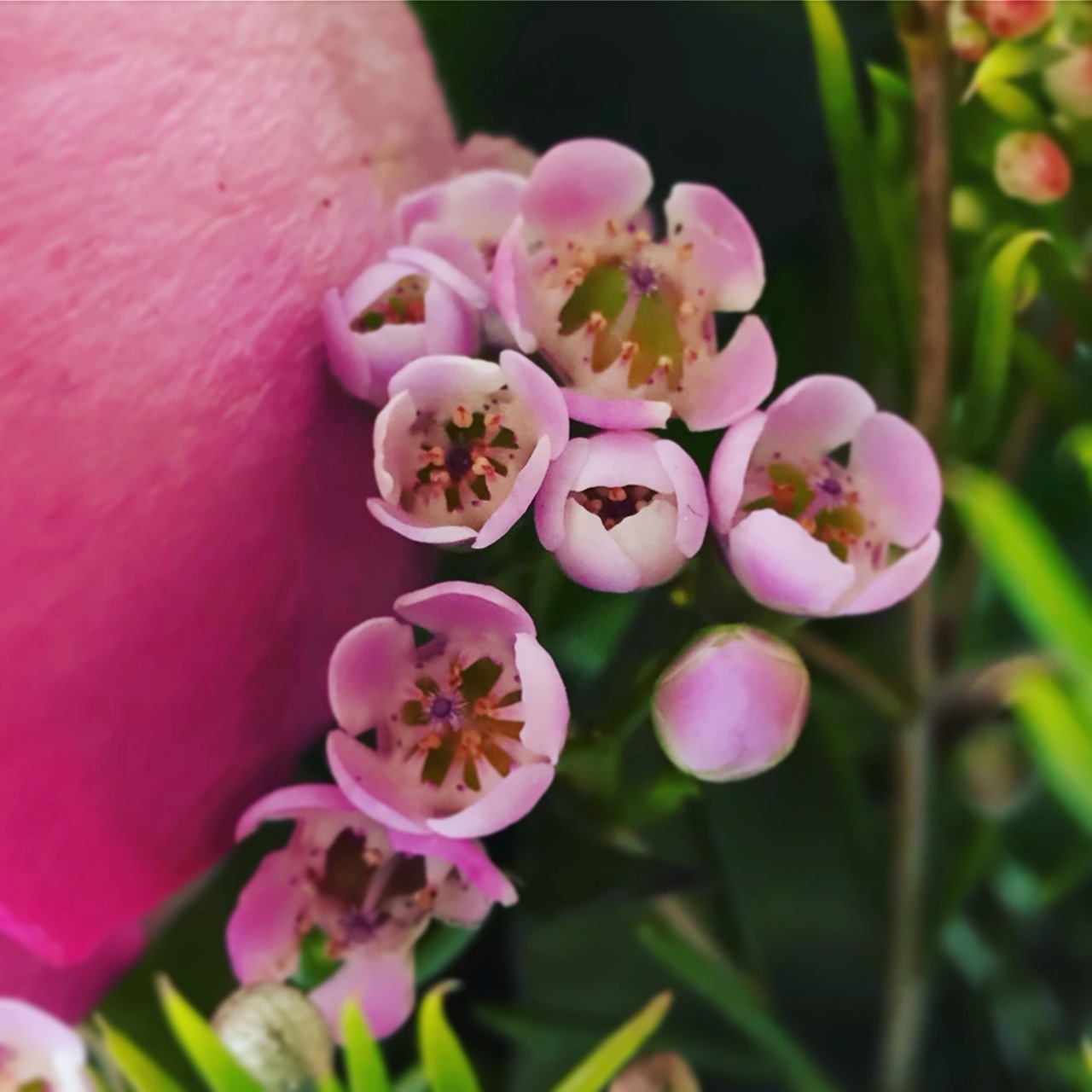 She was fancy on the verandah with your table cloths and your pretty plates. 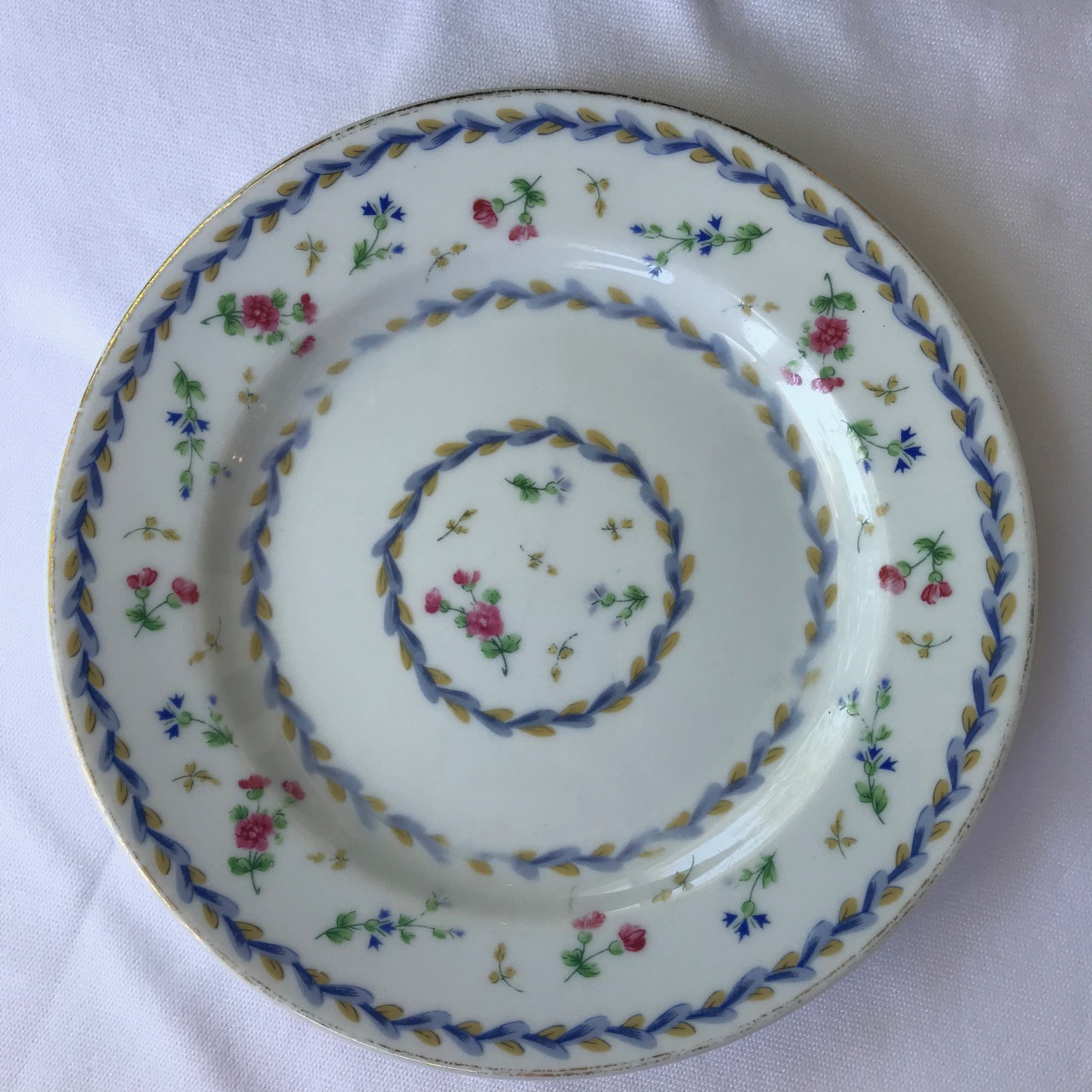 As we were in coastal seafood territory, it was an obvious choice to choose some seafood for lunch.  ML went for a lobster BLT – almost seems sacrilegious! and I went for this delicious bowl of lovely mussels. Scrumdiddliuptious! 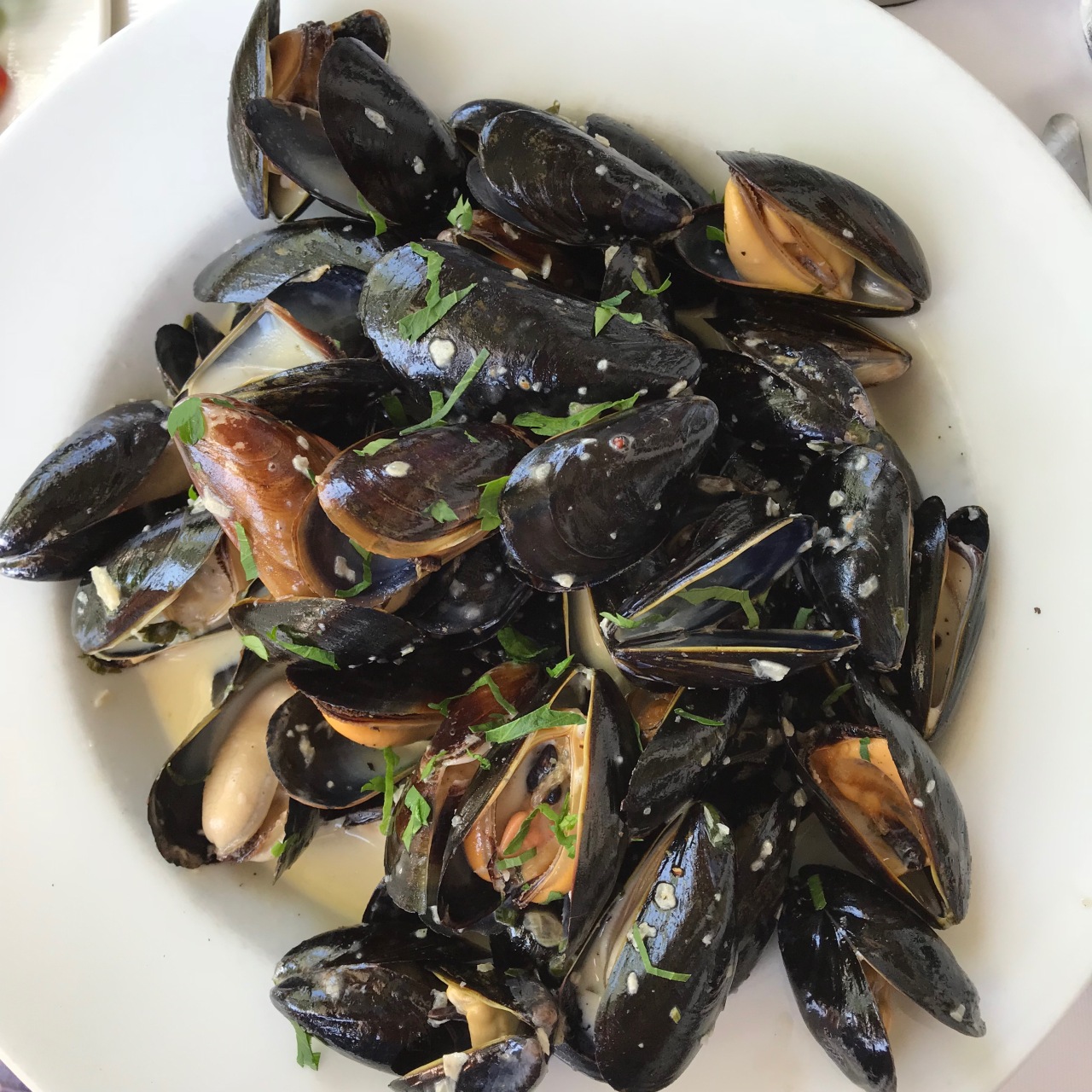 After lunch we went for a wander up the street.  It was quite reminiscent of Sorrento on the Mornington Peninsula where my lovely friends Tammy & Matt have a thriving business managing holiday homes – if you’re ever in the need of their services – Rest Easy Services they’re awesome! 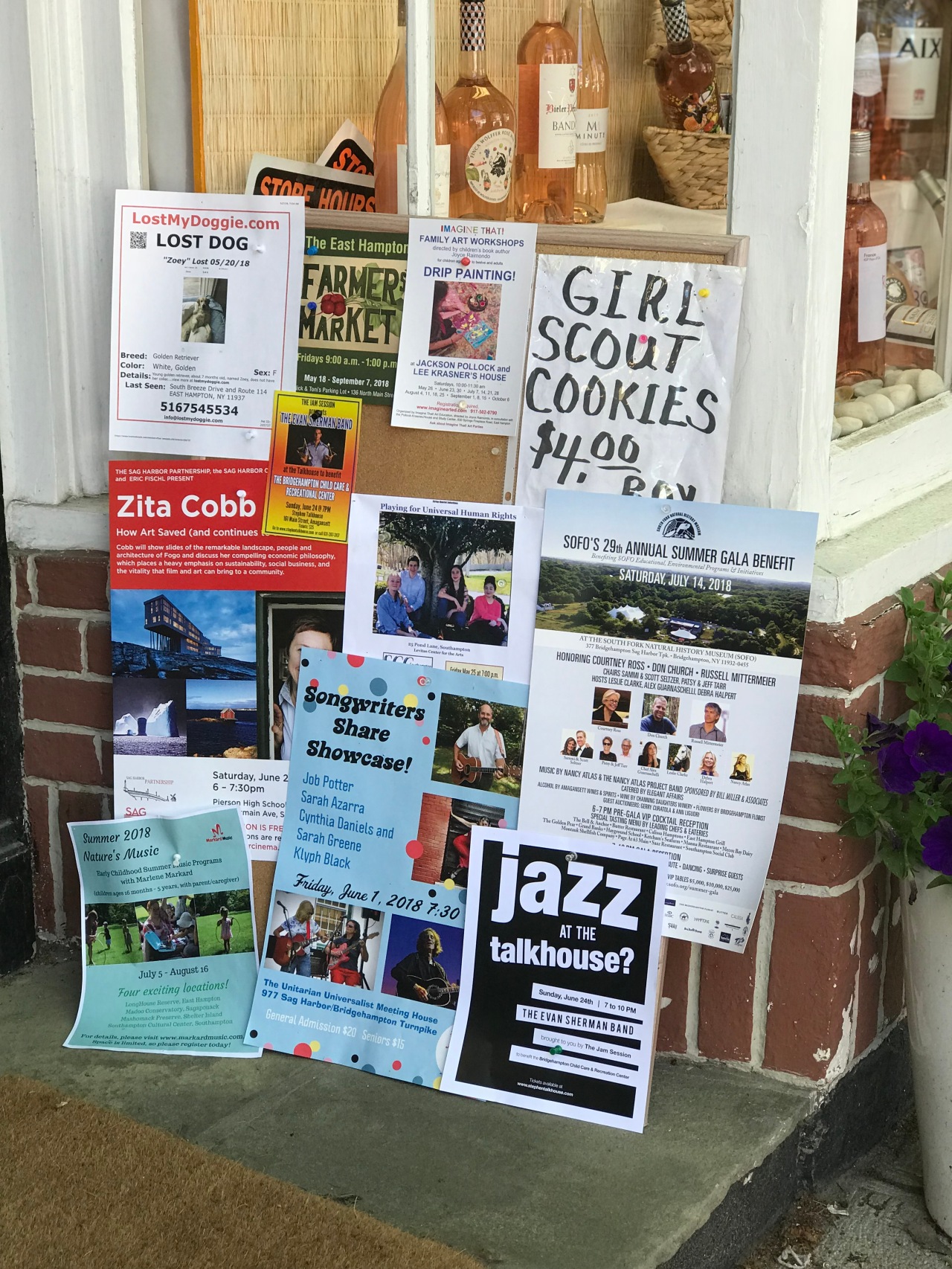 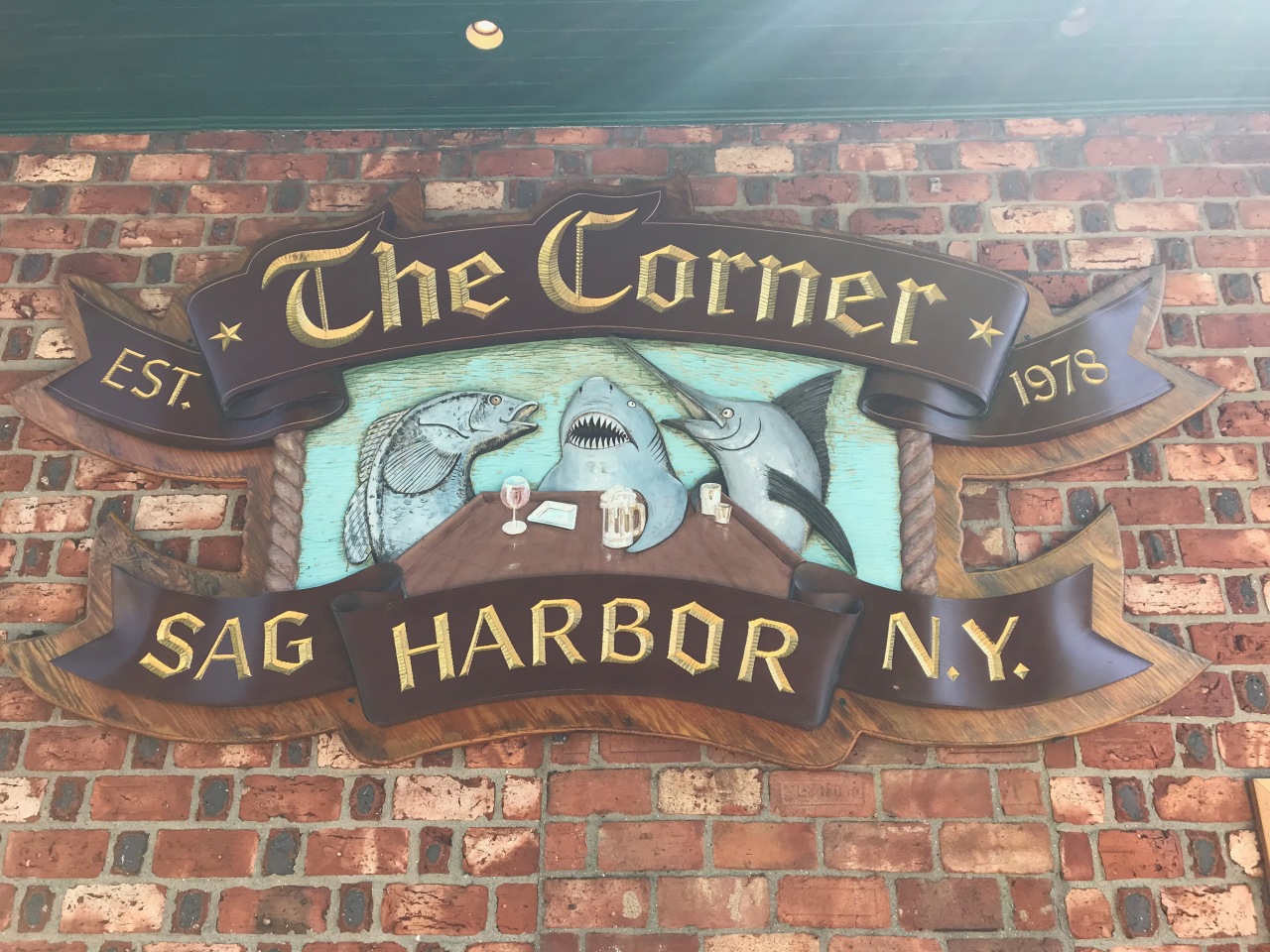 I’d like to try ALL the things on this menu!

Fliss & Rich and any of the plethora people who once worked at Cafe Del Pescatore, do you recognise the fisherman in the yellow raincoat with the beard and the pipe in the window? 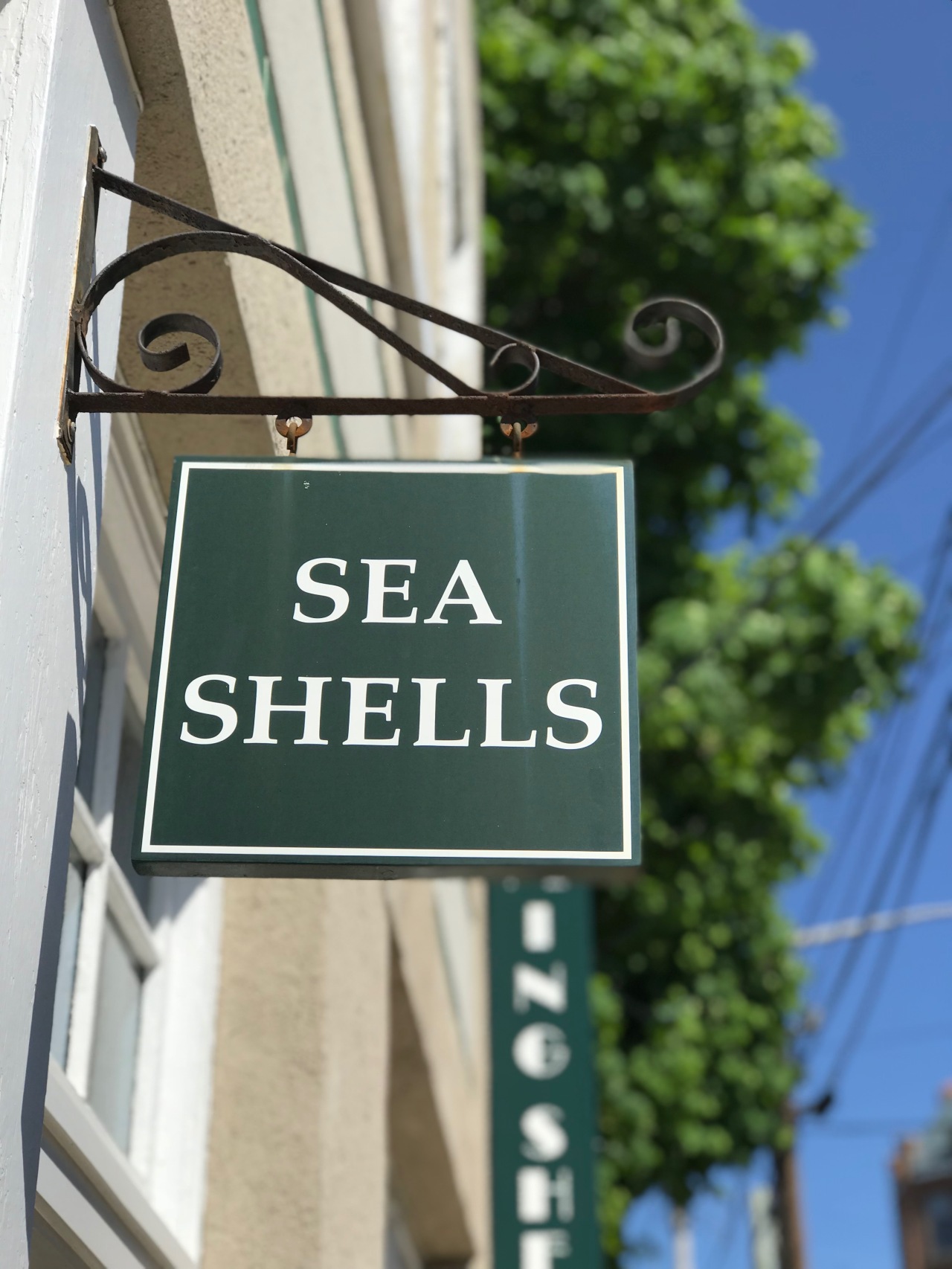 It was closed. 😦  Blooming Shells!

There is a common theme all along Long Island and that’s the windmills.  Apparently Long Island has the most windmills in the whole USA.  Back in the day with windmills were used to process grain, Long Island, which is 125 miles long and only 20 miles wide and relatively flat, so it catches a nice wind, is where they were put and many are still there today.

Every village has a lovely ye olde variety store… 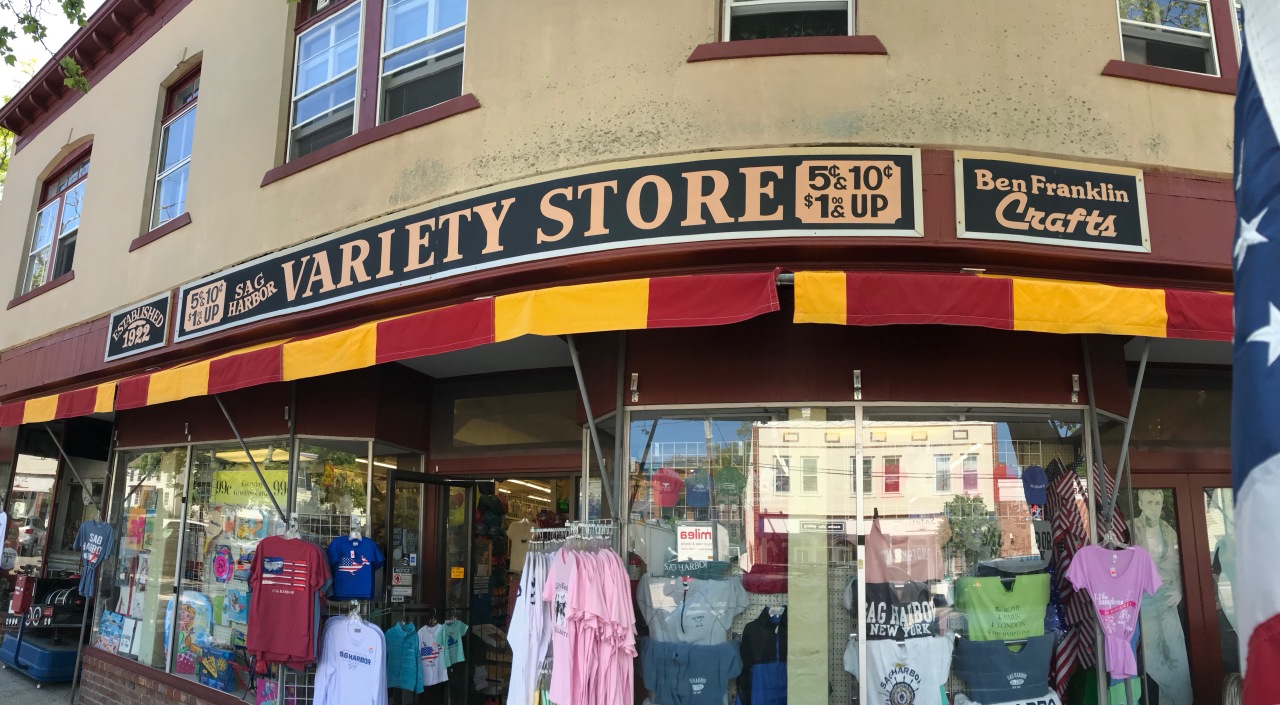 Where you can find products such as this…

And at the other end – top end shops that sell beautiful bags like this one… I was very tempted, but didn’t like the idea of ramming it into my suitcase. 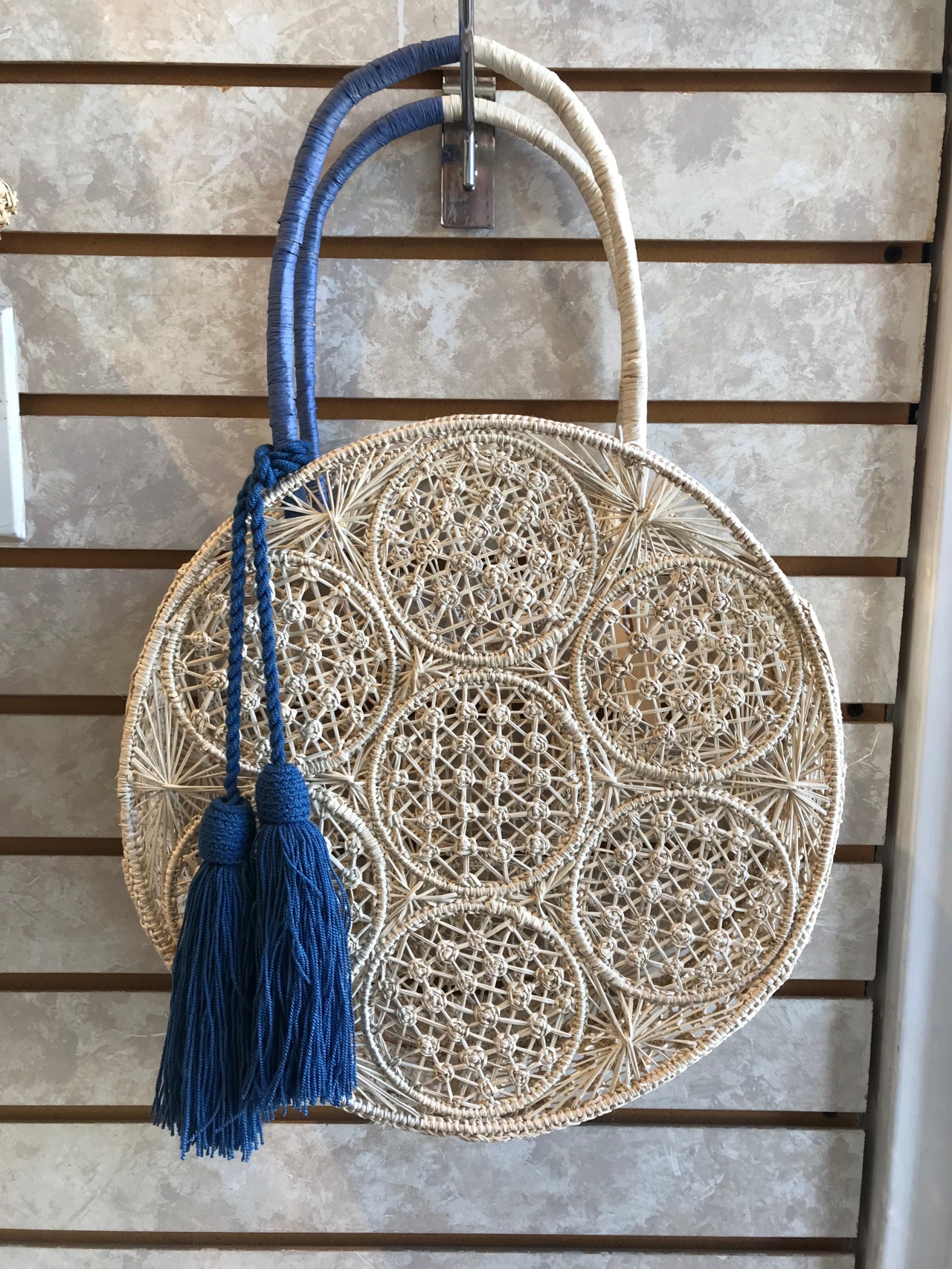 Once lunch had gone down we jumped back into the Maserati and like bogans, cruised the streets looking for lovely houses. 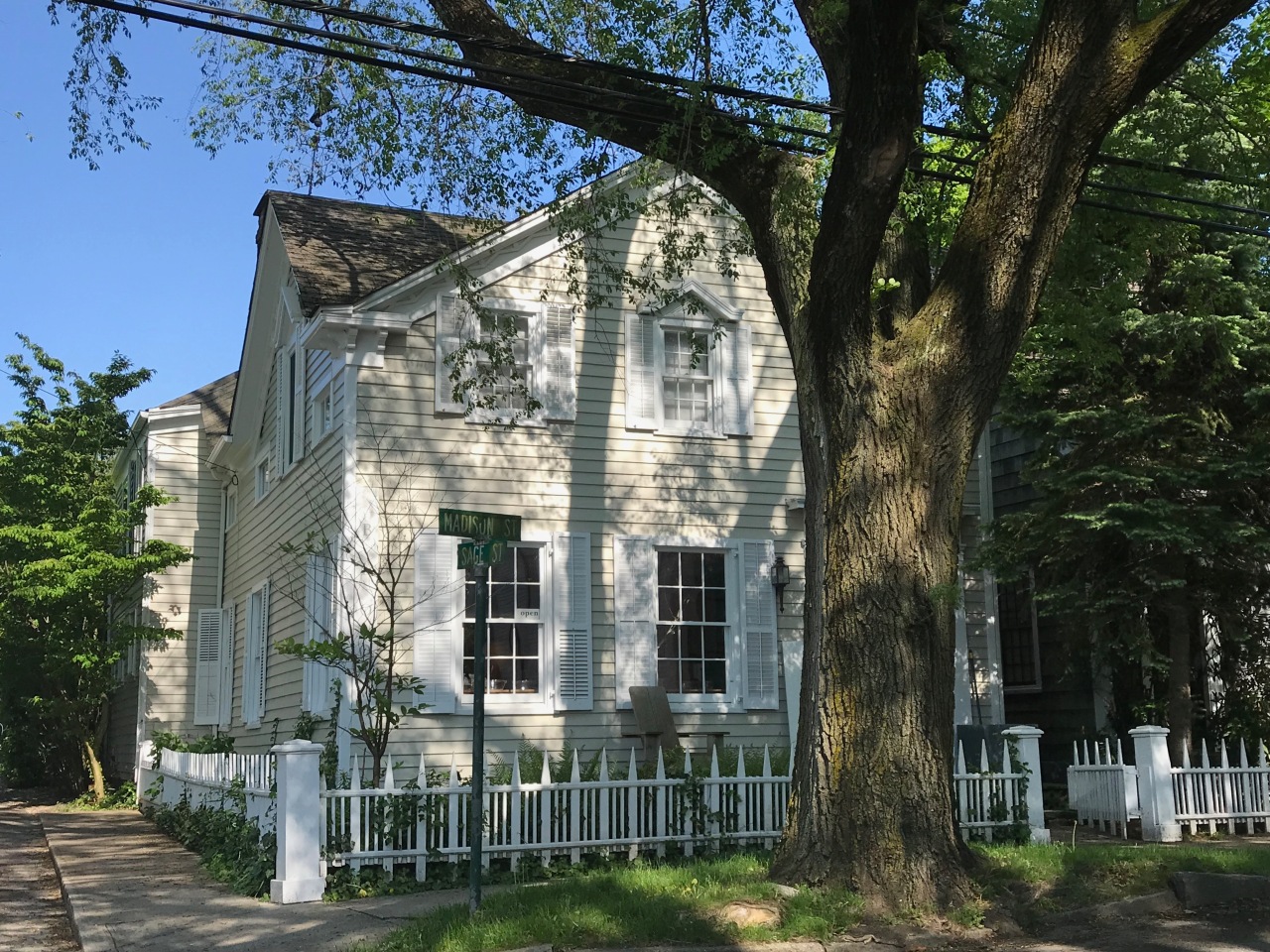 It was getting late into the afternoon, so we headed further along the island to the edge of Montauk where we were staying for the night.

We had chosen Wavecrest Resort which was a bit like a seaside motor inn with two story buildings that all face the water.  This is the view from our room… 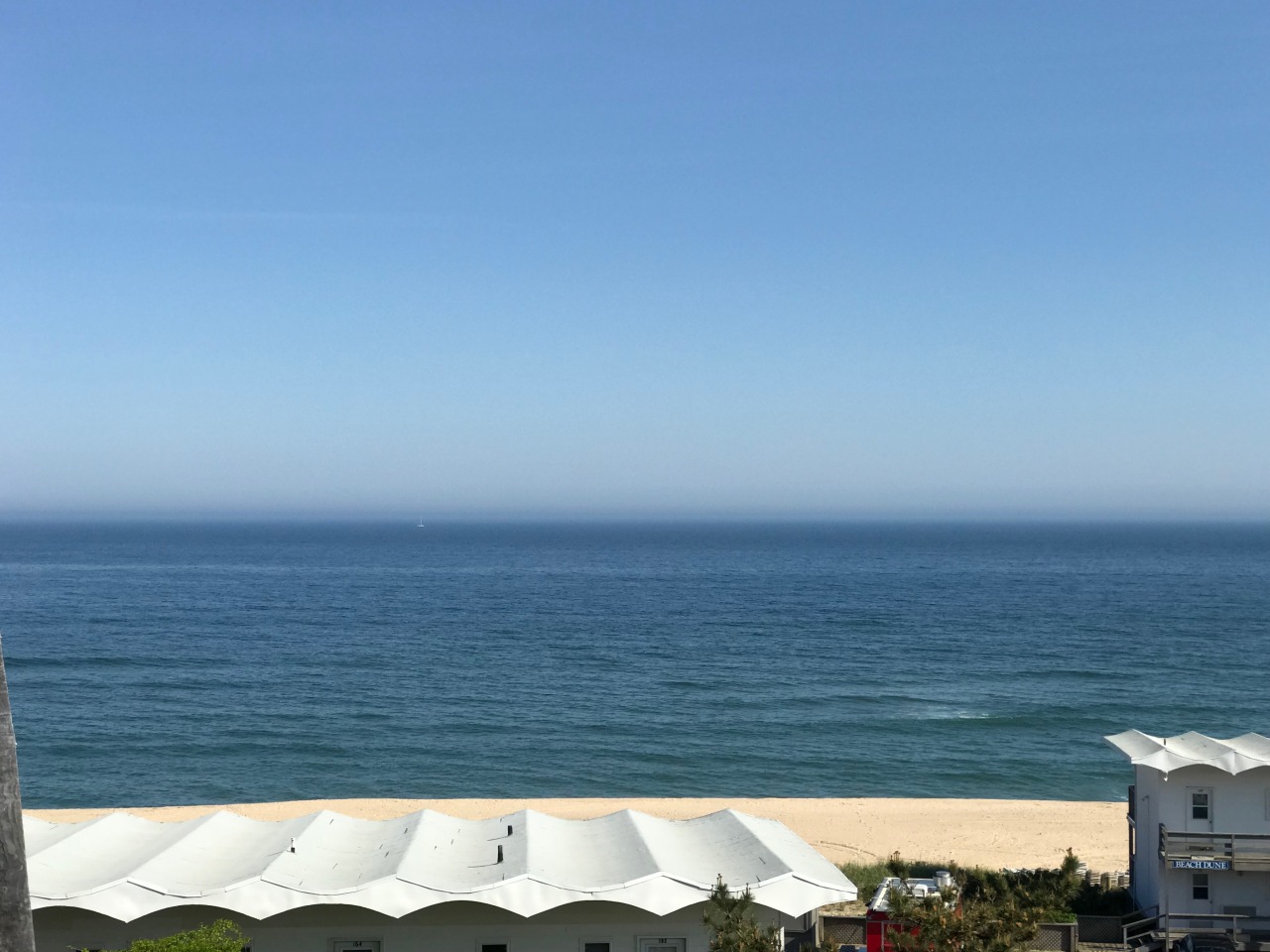 I’ve stayed in some funny places before… the old hotel in Lewes, UK for my friends Tanya & Nick’s wedding… in that room the whole floor had a 30 degree slope meaning things would slide of the bedside table… Hotel Jen in Singapore, a brand new hotel where all the light switch and power sockets were put on the wall by the blind work experience person… The B&B in Richmond, Tasmania where the room I shared with Me Jenny had a mirror over the four poster bed and a feather boa hanging in the cupboard… so it came as no surprise when we entered through the front door into the kitchen/bathroom area – handy if you every want to brush you teeth whilst cooking up a storm.  Also the beds were wonky… one was way higher than the other one, but also had a 30 degree angle on it – (may everything is straight and it’s me that’s on the lean?)  Despite all that it was very comfy.

These were the wall decorations – any ideas what H & K might stand for?

Whilst flicking through some of the mags on offer at the hotel, I came across this add for wedding events… at The Sloppy Tuna.  I don’t about you, but I don’t thing the words sloppy or tuna should be anywhere near a wedding invitation.

After a little settle in we decided to head into Montauk while we still had sunlight… and headed to the lighthouse – ‘The End’ of the island.

The lighthouse itself was closed, but we parked up to have a walk around… the curb was quite high and our Maserati is quite low – not a good combination.  The car was fine, but the number plate had seen better days  – well one better day – we were the first people to ever rent it!  Not to worry, we popped it in the car and I borrowed a screw driver from the hotel and fixed her right up… now I understand why my Dad travels everywhere with cable ties.

With sunset fast approaching we headed for a good vantage point to have a bevy and sit and watch it go down…. or if you’re a star gazer – we watched as our place on Earth as it turned away from the place in the sky where the sun is stationary – less romantic, but astronomically correct.

This was a seafood/sushi restaurant with a bar attached and they had a small balcony section outside.  We asked the woman at the ‘welcome’ lectern if we could just have a drink and watch the sunset.  Her frown didn’t change throughout the encounter as she informed us that tables were for people who were dining.  A second woman pounced on the situation and directed us to the bar to purchase our drink and said we could sit out on the balcony… simple.

The woman on entry didn’t make us feel like we wanted to dine at this establishment, so we jumped back in the Maz and headed to the other side of the inlet to a restaurant we could see from the balcony and all was well.

Welcome to The Hamptons.